Unless you're a master of origami, you likely were frustrated when you first transformed the Leader class mold of Sentinel Prime. With all it's individual panels to line up, it was an art form in itself. We're now presented with a smaller Voyager mold that offers a less hectic transform process. Has anything else changed in the downsizing?

Sentinel Prime is ready for battle. After lying dormant for countless centuries the powerful Autobot is set to awaken on Earth. His close ties to Optimus Prime and the Autobots could form an alliance capable of finally destroying the Decepticons for good! 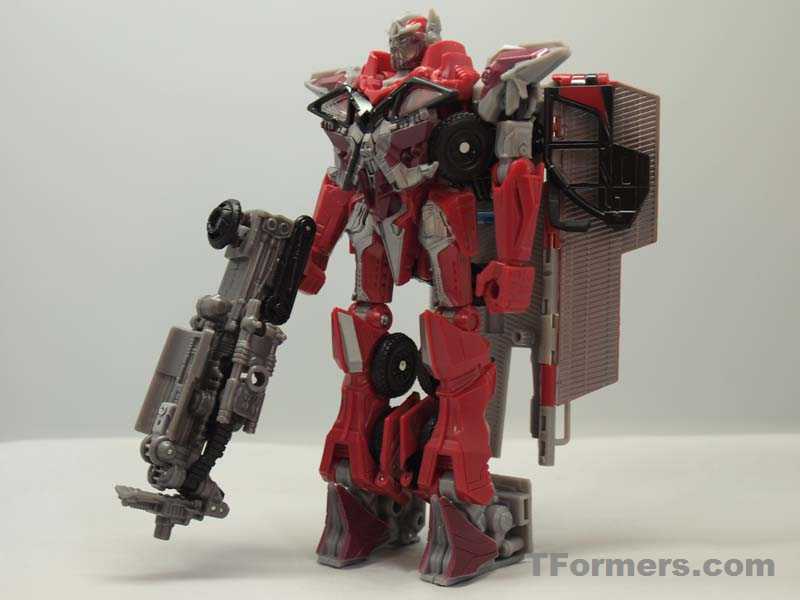 At first glance, Sentinel Prime's Voyager mold looks alot like his Leader mold. The truth is in the details, or, in the lack of details. There's more unpainted PVC adorning the mold, including the head. The chest is a false applique. The hands are molded in the same red as the arms. The eyes are piped clear. 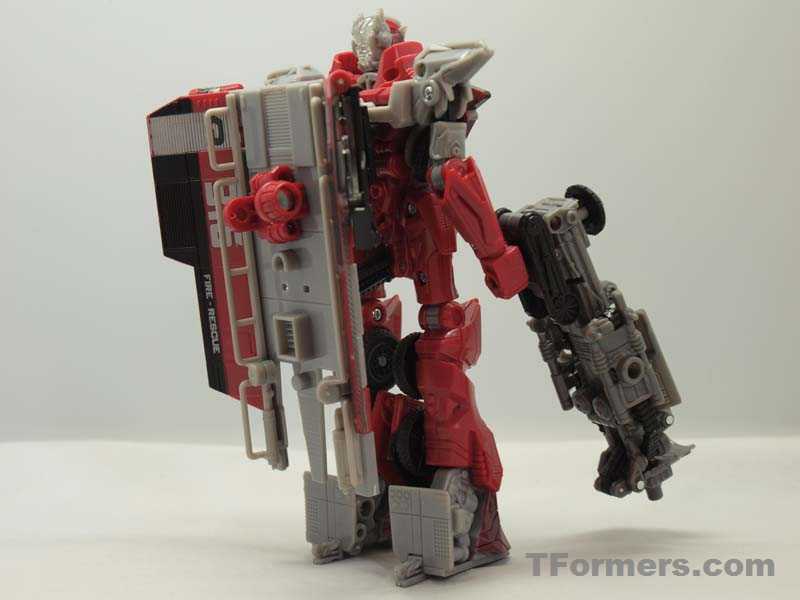 His footprint is also considerably smaller. However, it surprisingly doesn't interfere with his balance. Nor does the backpack that becomes his cape. He trades his shield and blade in for a cannon. This cannon converts into a much larger piece via a push-and-turn lever in the back. There are also two ports on the barrel that you can hook more MechTech to. 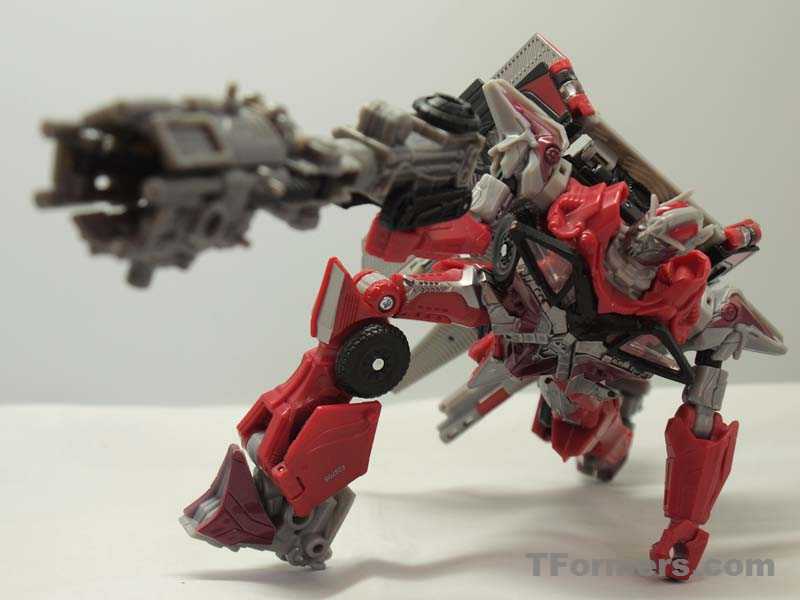 
What's the deal with all the molded waists lately? Articulationi is about average.

Robot Mode Summary:Downsized and downgraded, but only a little.

Sentinel is basically a shellformer. Fold his arms behind his back, line up the legs and fold out his backpack to wrap around him. Considerably easier than his Leader mold, but still a bit of a hassle. 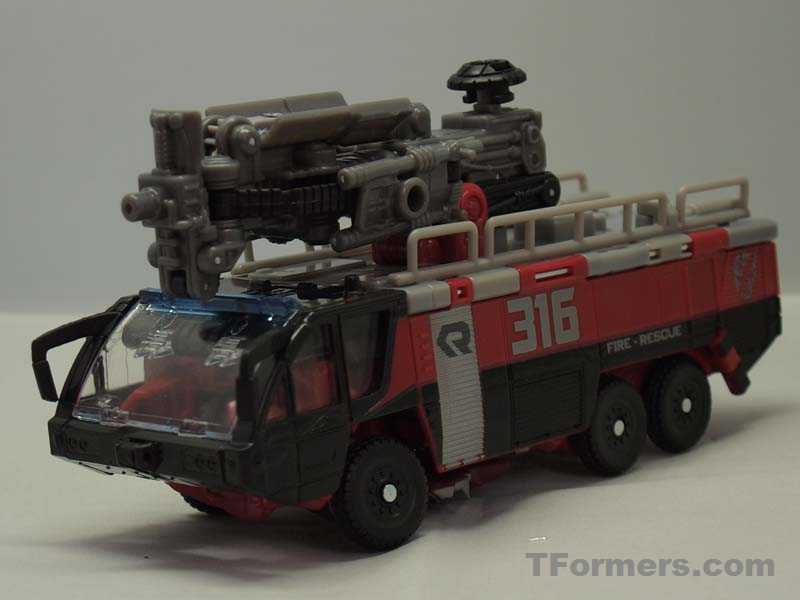 The Rosenbauer Panther truck didn't suffer much from the downsizing. The deatails are also a bit different. For instance, the Autobot insignias on the rear end are scratched out, notating his betrayal. The rear end, however, is bland with only PVC molding. 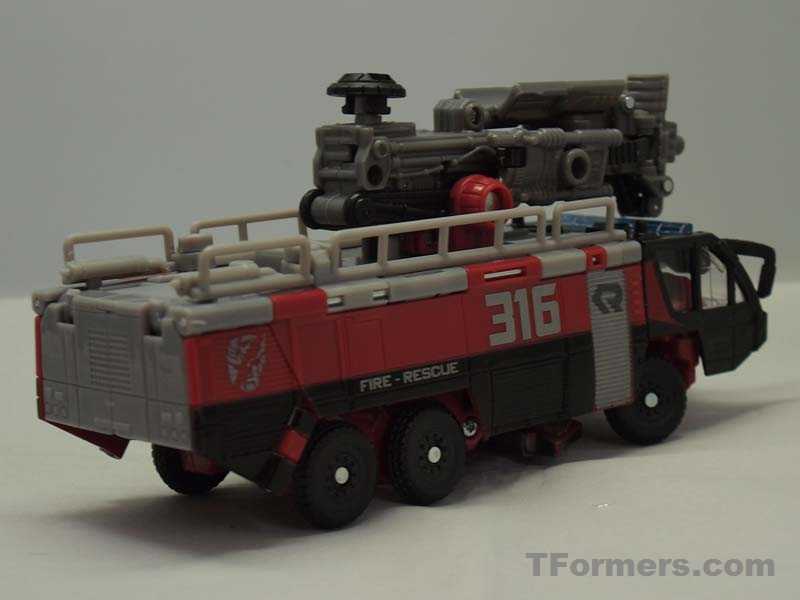 The nozzle boom is capable of being rotated 360 degrees and lifted to a 90 degree tilt. If you so choose, you can also activate the MechTech feature and turn it into a cannon boom. Again, the major complaint with Sentinel's alt mode is the clear front glass that only shows off robot parts. At least tint the windows.

Alt Mode Summary:Smaller, but not much better

This is basically a less detailed, smaller version of Sentinel Prime. The only major difference is the MechTech weapon and the false chestplate that sits low to the ground. I can see the chest plate getting scraped up. Also, the mirrors are rubber so long term storage could be an issue.

I had high hopes for Sentinel Prime's Leader mold and was somewhat disappointed. While I knew the Voyager mold wouldn't be much better, the lack of detailing in some areas was a further disappointment. I know Sentinel is a traitor, but even a traitor deserves some improvements. You won't find them here.