This is my first review of a toy so go easy on me! I was going to do a video review, but my camera battery was dead so I'll do a photo review instead.

I just received TFC Exgraver Monday from Robot Kingdom. The retail price from RK was $77.90 with shipping coming in around $16. The item took about a week to be delivered which wasn't as bad as I figured it could have been.

Exgraver comes in a pretty sweet box. There's a window in the front which lets you look at the figure in robot mode. The inside tray which holds the figure in plastic is also decorated like the outside of the box. Not a bad touch. The figure also comes with a file card like most Japanese TF figures. The artwork on the front of the box is used multiple times in different places. The instructions are very easy to read and understand. I think i had only one issue with trying to figure out the instructions and it's not even that big of a deal. I'll get into that later. 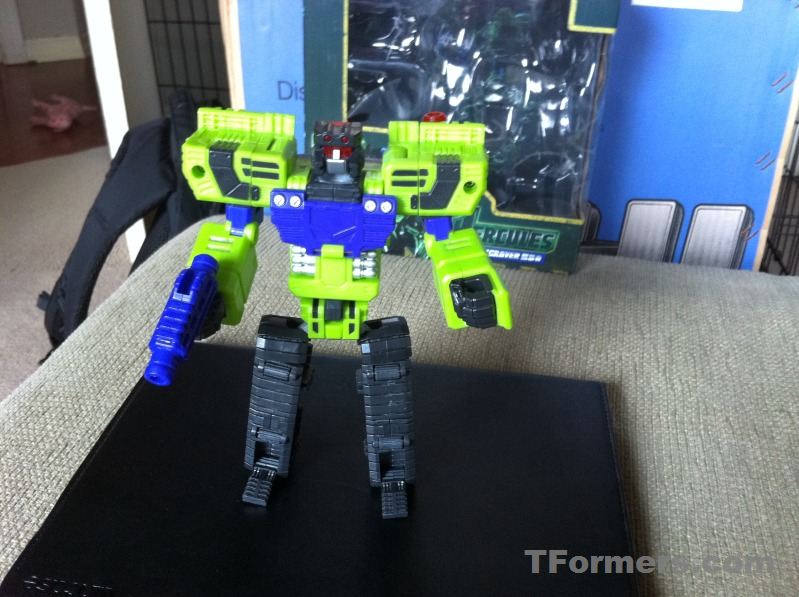 Exgraver is a pretty impressive figure once it's in your hand. It was hard not to feel giddy knowing I'm 1/6 the way to building a dream transformer figure. The figure is very sturdy and has some weight to it. Thats a very good sign the figure was not made of the cheap plastic stuff that most KO parties use. This feels like it could have had a legit release from HasTak. The way the figure comes packaged has his leg to waist joints at a 90 degree angle. Having Exgraver's joints in that degree gives the impression that he's short. Pulling the legs down to give that joint more of a 45 degree angle improves the figure and gives it more height like Scavenger. The 2 weapons can attach to 2 screw holes on the back of his shoulder for storage. His head has red piping for the eyes which is a very nice touch. There's only 1 issue i had with Exgraver's robot mode is where the ball joint and the head connect. It's very loose. I believe there's a method to add super glue to the joint to add more grabbing surface. I've never tried it so i'm not sure how well that works. I can still pose the head in any position. It's just very loose. 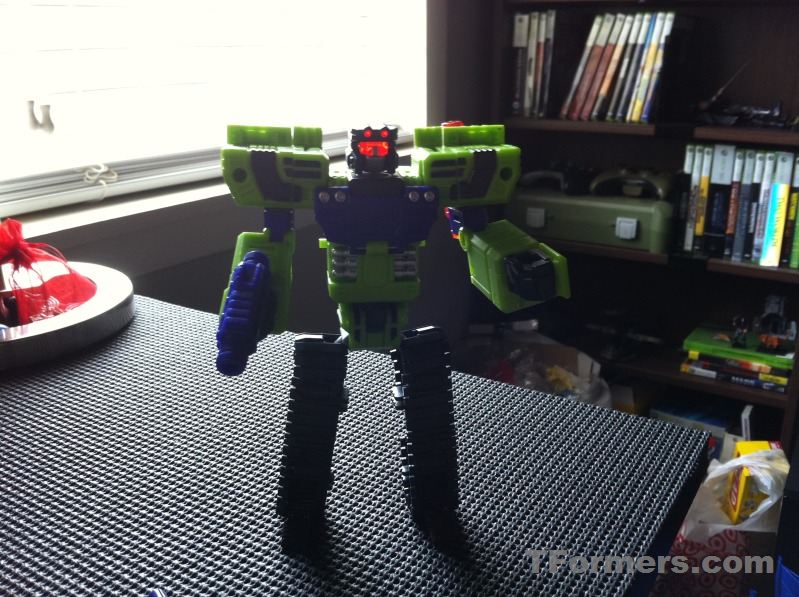 The transformation to vehicle mode is very simple. Basically, the shoulders go up, a few twists to the arms and hands, then the arms go down to the sides of the chest. There's a piece on his back that folds up and on top of the 2 shoulders pieces. This covers the head and is where the hand attaches in vehicle mode. This was the only issue i had with the instructions. It didn't show me how to place the fingers to get it in there nicely. It wasn't hard to figure out so it's not really a big deal. Once that is in place, the chest piece flips down, rotate the waist, close the feet, and swing them down beneath the vehicle. 2 pegs flip out of the arms and go into the treads. Then you add the drivers window to either hand and finally add the shovel to the top. Pretty easy and a lot of fun! I couldn't stop transforming him for the first hour I had it. 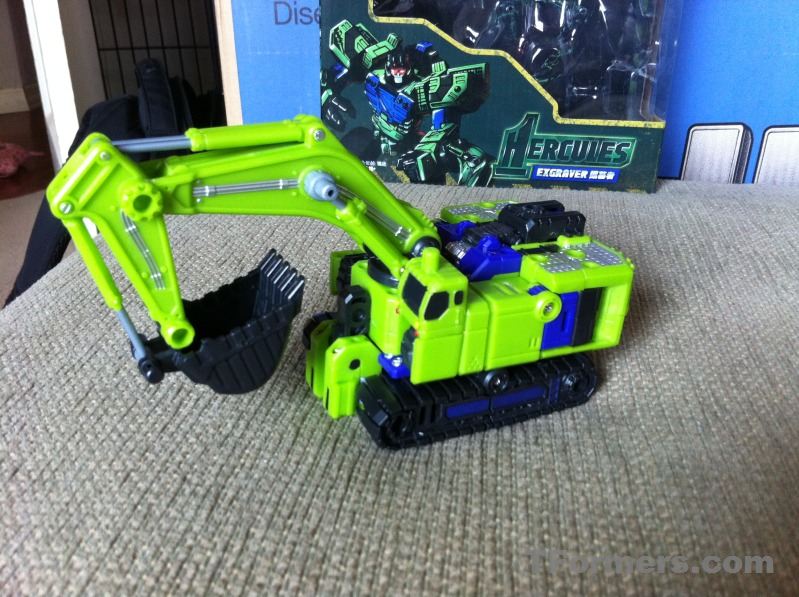 Vehicle mode is what you expect it to be. It's a good looking construction vehicle. The treads have 4 wheels built in but one of mine suffered QC issues and doesn't roll very well. I think I just need to cut off a little excess plastic in the area. The other fist that is not housing the cab is pretty visible in vehicle mode. I think thats the last complaint I have for Exgraver.

Transforming from vehicle mode to the Hercules arm is pretty easy. First, remove the fist from it's hiding place. Next, swing the legs down and fold them up in half. The fist attaches to the legs like Predaking's fists. The connection port is under Exgravers head and rotates down. Lots of clicking noises. The final step is to rotate the shovel 180 degrees and rest it on Exgraver's head and top of the vehicle. This last step could be optional but i like how it looks. 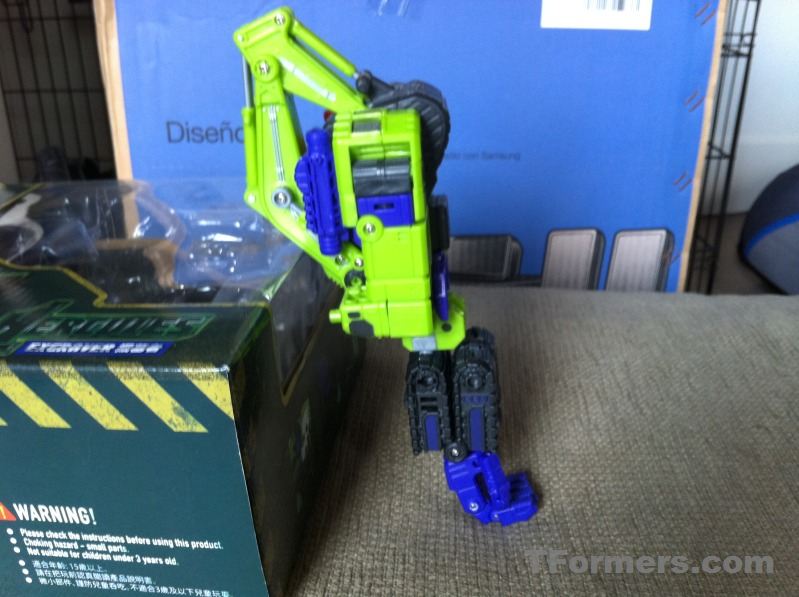 The fingers are have plenty of articulation where you would hope and want to have them. We'll be seeing plenty of Not Devy's in the future giving double birds to bad figure. This arm is big and is pretty epic. Again, it helps build that excitement for the complete set of figures. This arm is very close to the size of G1 Scorponk's arm. 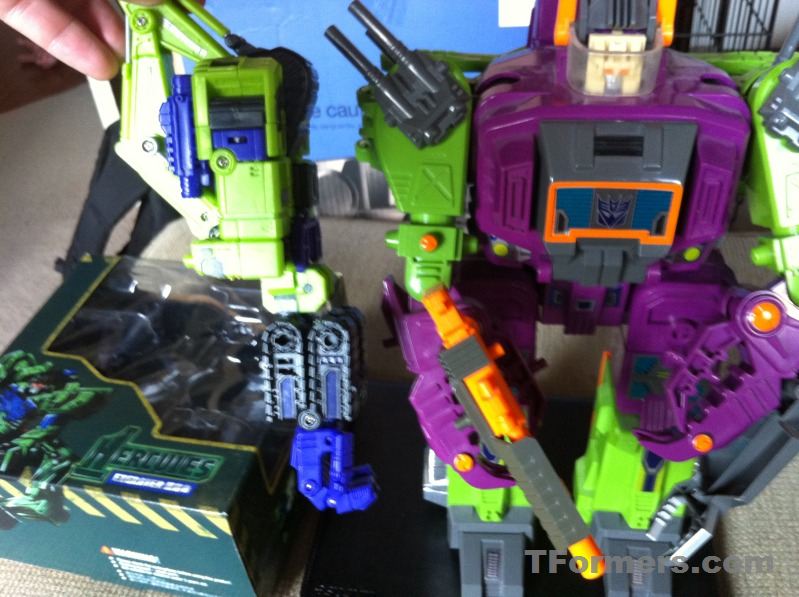 Overall, i love this figure. It's been a long time since i've been so excited over a figure. The quality of the plastic isn't cheap at all and is on par with that of any HasTak figure. The figure has plenty of articulation to please almost every one. The price is a little hard to swallow up front, but I have yet to regret the decision at all now that i have this figure in hand. I just wish i didn't have to wait 8 months or so to get the last 5 figures. I want to build Hercules now! I'm giving the figure a score of 8. The QC issues for the tread and head knock the score down 1 from 10. And not having anything to cover the fists fully in robot mode knocks the score down 1 more.