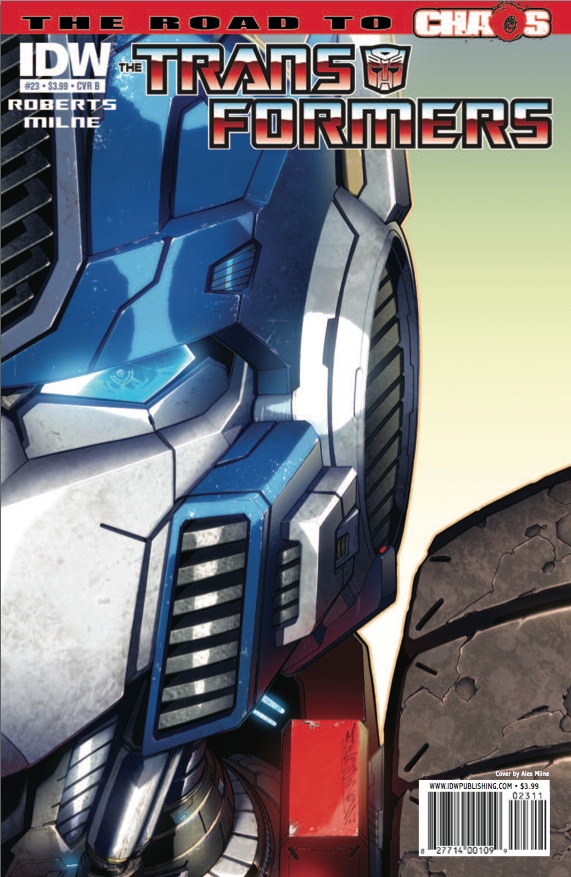 The two opening issues to Chaos are in our hands and we've weighed the first to be more than worthy. The second, Issue 23, hits the comic shops Wednesday and it is as important and thrilling as last months! Another great comic from a well gathered creative team; James Roberts, Alex Milne, and Joana LaFuente! It was an honor to read and a pleasure to review. And I hope IDW continues to keep this level of storytelling up because the last several weeks the telling from both Costa and new writer Roberts, continues to represent.

Orion Pax catches bad guys… a lot of them… for a living!

Ongoing issue 23 is Optimus Prime's version of how events brought him into the limelight on Cybertron just before the war. After releasing Megatron, the bot who wrote a treatise on the state of Cybertronian society, Orion Pax had a lot to think about. When three senate security bots come to harass him, giving more weight to the words he read, he becomes restless and disturbed. He not only makes a stand for principles he already believed in, but he takes it to the next level. And right into the optics of those who'd rather have him silenced. Meanwhile in the present day, Optimus Prime makes a haunting discovery, but renews his faith. The lingering questions on how things really went down before the war is planted. On rolls Chaos, and more questions...

Another beautifully composed issue! Alex continues the standard he started last issue. He gives us the world of Cybertron, crafted as if it's at the height of its existence and in a way few have ever done, or had opportunity to do. The characters are new fresh, detailed. They emote and it enhances the storytelling. Then Joana comes into this world and makes it inhale and exhale. Again I'm so glad to see these two working together.

Even when he's down he kicks tail pipe!

James is a master craftsman. This issue has more action then the last one. We aren't drawn into a chess game/loaded conversation this time, we are drawn into a character piece that illustrates finely why Optimus Prime became who he was. Not by chance, but because he is the same bot he's always been. He has principles he was willing to fight for, no matter the cost. Brilliantly played. (Ongoing in 2012 is in fully capable hands, he's won my trust and then some.) Orion Pax/Optimus Prime has always been a bot of action, but not until after careful contemplation. I really believe James gets this character in a way I don't believe he's been written before. It's almost like he's got a pulse on the ideal version we've all wanted to read, but in a eerily realistic sense. Optimus makes mistakes, he has fears, he bites off more than he can chew but perseveres. Issue 22 was cleverly disguised as a Megatron issue, but this issue only confirms the whole two comic opener to Chaos has been about Prime. Both issues support one another and I can't think of any element used in the 44 pages which doesn't give us something important for the story. Not a panel, or word of dialogue, or drawn space wasted. Intense!

Sentinel only WISHES he was as awesome as Orion Pax! What he doesn't realize is that we will be seeing more of Pax...

Is this issue stronger than the other? I have to admit my opinion is completely compromised in this area. I love them both for different reasons and as much as I love them my favorite choice comes purely down to personal preference. But they are both top notch issues I believe have already planted things to come. Can't say what those things are, but I look forward to more storytelling from this writer and if its possible, this whole creative team. Thank you IDW… just wow…