As (technically) the 4th Masterpiece mold in the lineup, Rodimus was surely a welcome surprise. While the 1986 Hot Rod figure was overall liked, the Rodimus Prime figure from the same era was not. Almost 25yrs later, Takara provided the best of both worlds as they offered a Hot Rod that could also double as Rodimus Prime. US fans waited for news that it would come Stateside. They were half satisfied, as only Hot Rod would make it. However, to make up for not including the trailer an exclusive Targetmaster was included. So how does the Toys R Us exclusive pan out?

Before the coming of Unicron, Rodimus was already a talented warrior, recognized by his comrades for his potential and his lack of patience. When he became Rodimus Prime, he immediately set out to lead from the front. He was always the first on the battlefield, and the last off, thrusting himself into the deepest danger rather than asking any of the robots under his command to sacrifice themselves. 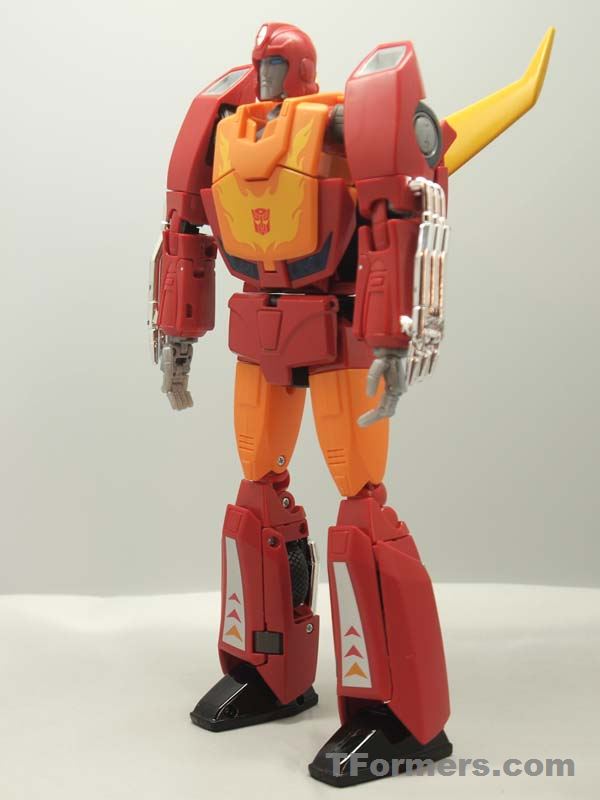 Whereas Takara's MP09 release is more anime accurate, MP Rodimus is more accurate to the 1986 figure. That includes the red shins with the markings. Separate stickers are packed in if you wish to also apply the markings found on his upper arms. One variation that is subtle is the flame marking on his chest, which isn't a tribute to either the anime OR the 1986 figure. One thing that is spot on is the head sculpt, which features blue painted eyes. There is an abundance of chrome on his exhaust, which is a welcome touch. One annoyance I have is the chest, which does not lock down and causes his abdomen to flop around a bit. 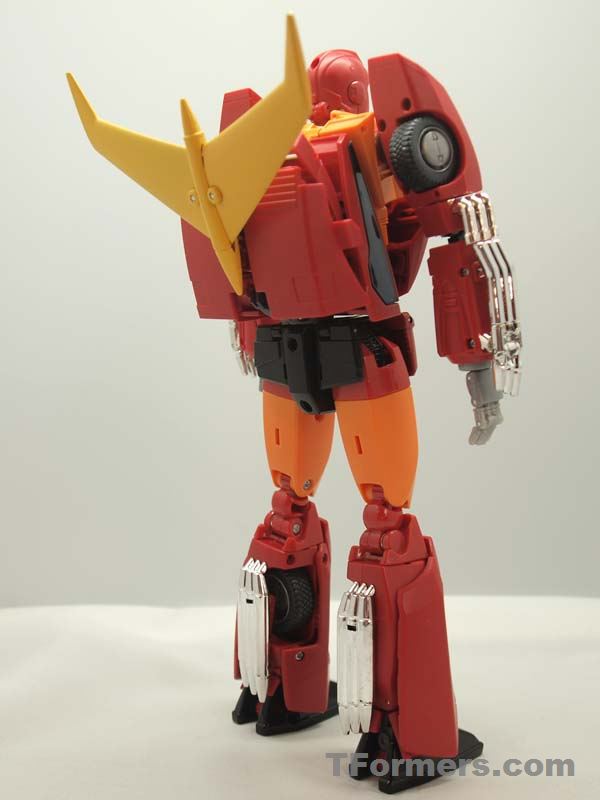 Rodimus features several pack-ins. The first is a pair of small rifles that can be pegged into each hand. However, they don't peg terribly well and any wrong movement can result in them falling out of his hands. You have to make sure you don't wrap his fingers too tight around the handles. 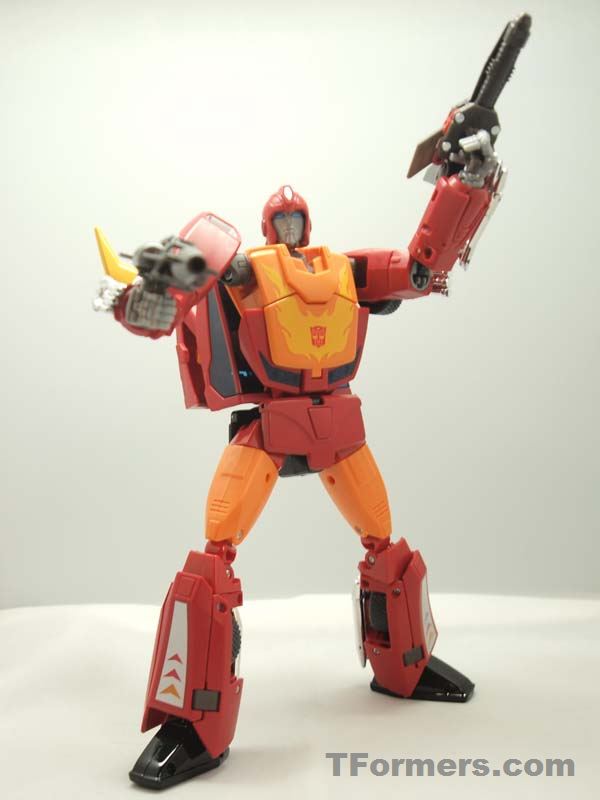 Either hand can be switched to become a placeholder for 2 movie referenced pack ins. The first is the saw blade used to fend off the Sharkticons upon his and Kup's landing in Quintessa. The blade is depicted as being in motion and can spin on it's mount. 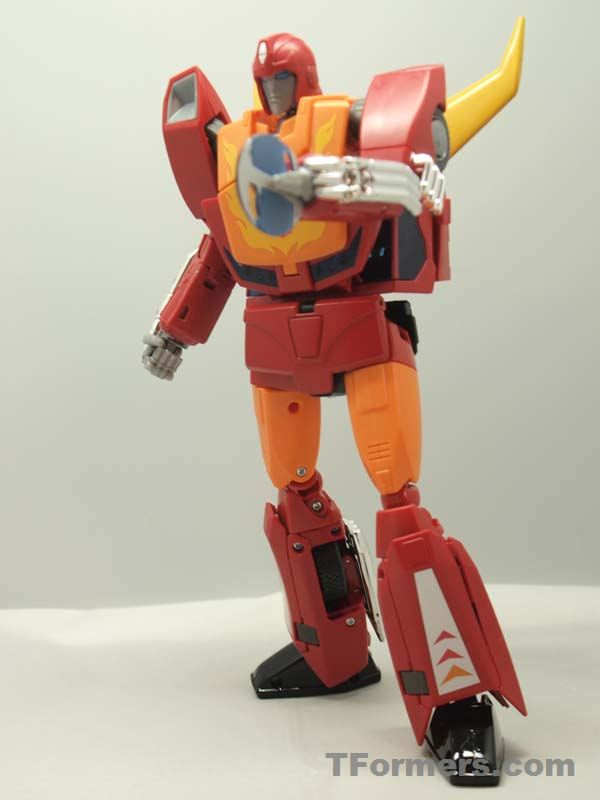 The other item is the welder used to piece Kup together after aforementioned Sharkticon attack. 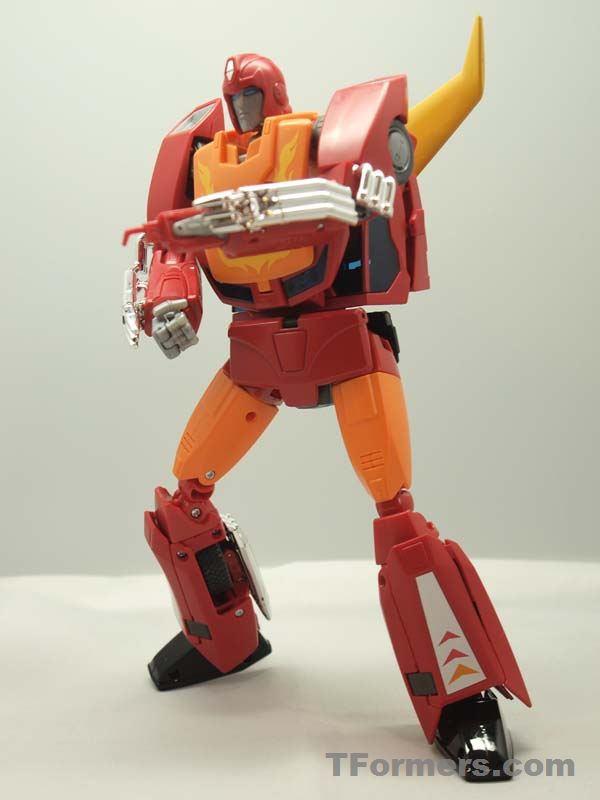 The next pack-in is attributed to his later alteration as a Targetmaster. However, the name Firebolt must have been used because the Targetmaster packed in is called Offshoot. 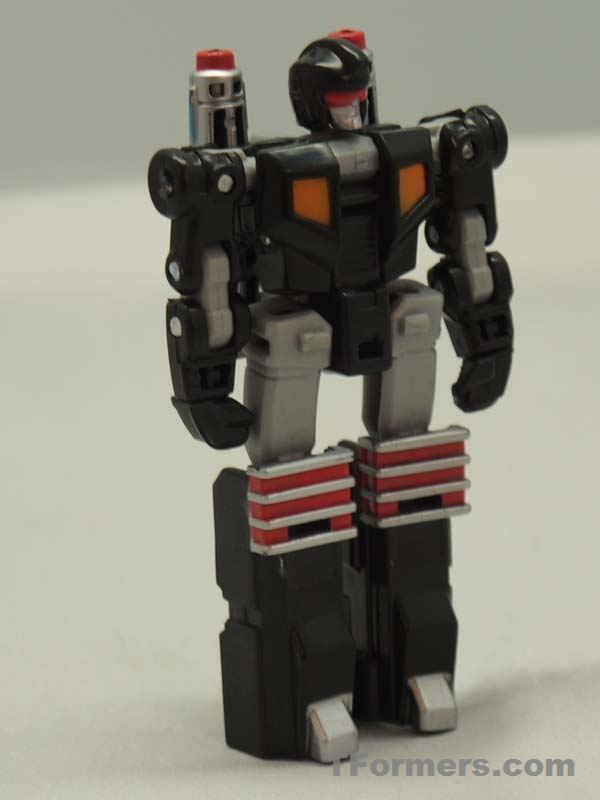 Offshoot doesn't share a lot of commonality with Firebolt aside from the black chest. The red visor is partially correct being that Firebolt's whole face was red. One thing that is thankfully different from the G1 version is articulation. Due to the transform process, Offshoot has a full range of knee, hip, shoulder and elbow jointing. However, due to the small footprint balancing is another issue. 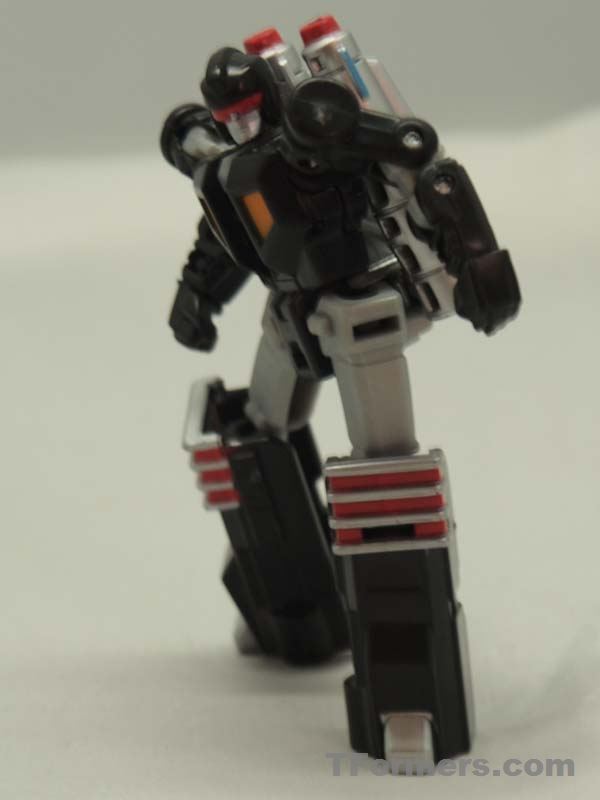 His weapon mode does a good job of not looking like a folded over robot. I'm not sure if this is a QC issue or not, but the handle of Offshoot seemed cut short. This posed a problem which will be discussed later in the review. Overall, Offshoot is a finely crafted partner. 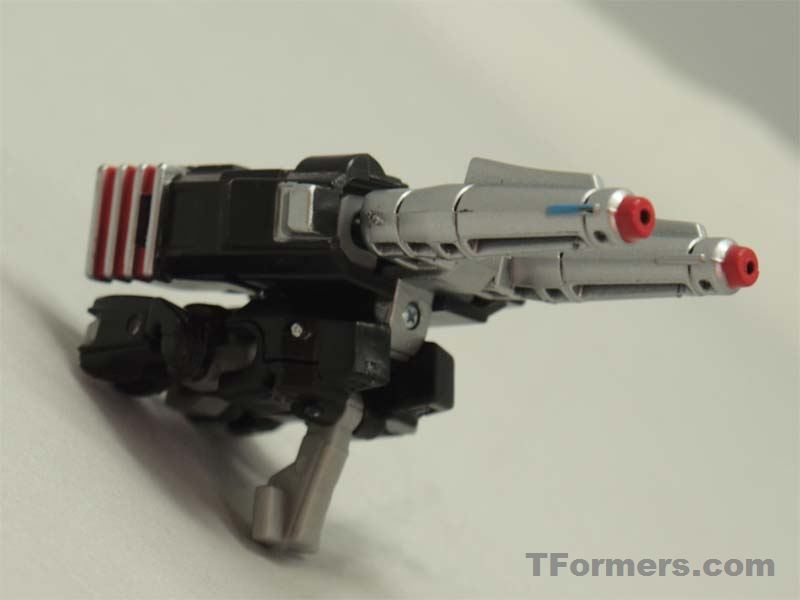 Offshoot pegs to Rodimus the same way as his static weapons. Another add-on for Rodimus is his visor, which was used in the movie to zoom in on the crippled Autobot shuttle. The visor pulls down from his helmet (sometimes without even asking) to cover his optics. 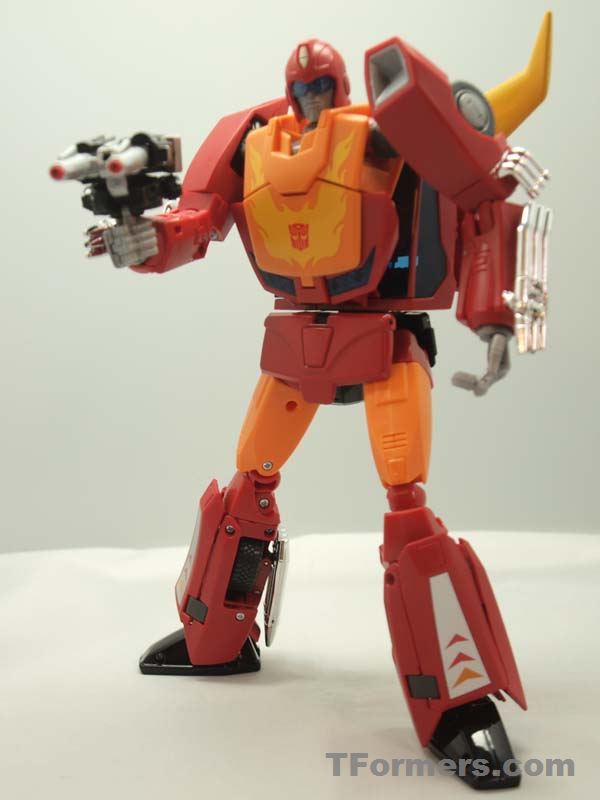 
All the ingredients are there to suggest stellar articulation. However, a smallish footprint and some top-heaviness prove otherwise.

Robot Mode Summary:All the pieces are there, but they just don't seem to fit. 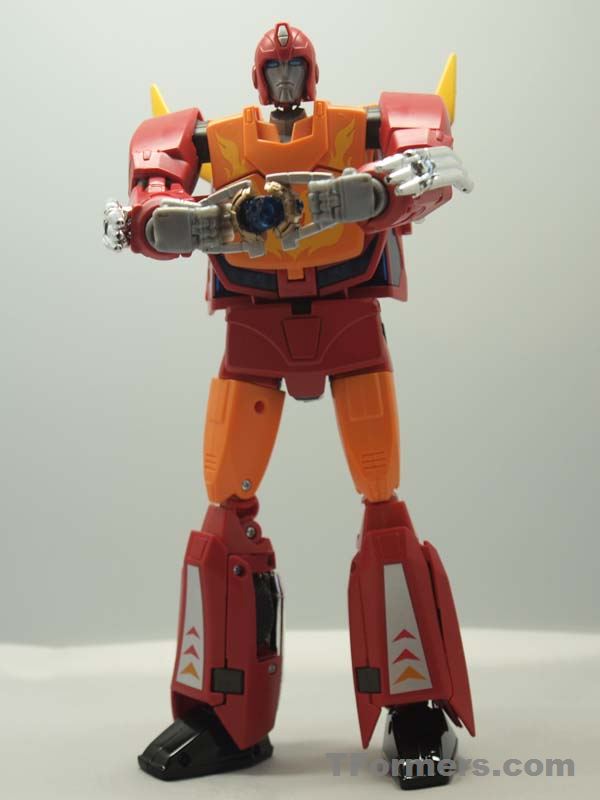 Lifting up his helmet will pop out the Rodimus Prime head sculpt. Simply push the Hot Rod face back and lower the helmet back down. The rear wing can pivot up a whole 5 degrees. Pulling down on his legs will alter the jointing on the hips so that the legs are 3/8" longer. Hope you weren't expecting anything else... that's it.

The main difference is with the head sculpt, which again is pretty accurate. The wing pivot is so negligible you'd be hard pressed to notice the difference. Same goes for the 'discrete' height gain. However, there are 2 other gimmicks that go along with Rodimus. 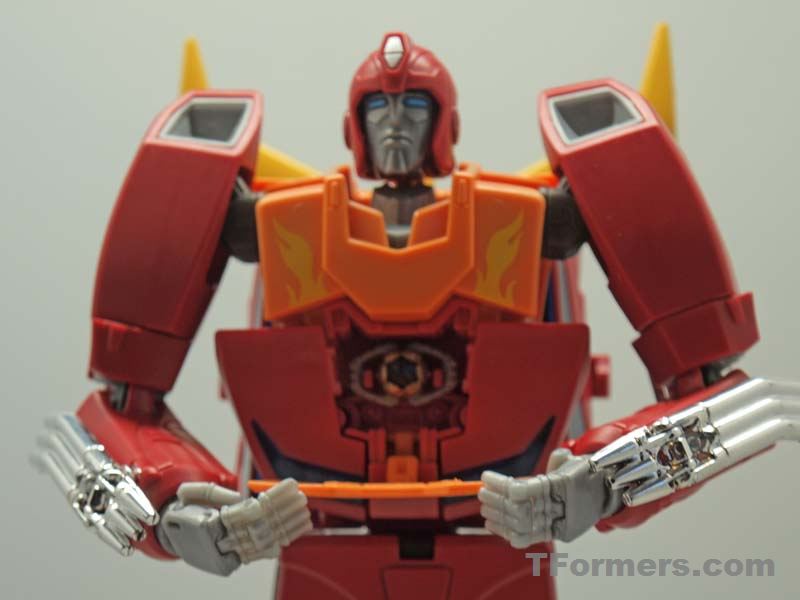 As well as having a Matrix that he can wield by hand, there is also a smaller Matrix that is housed in his abdomen. You can lift up the hood to expose it. 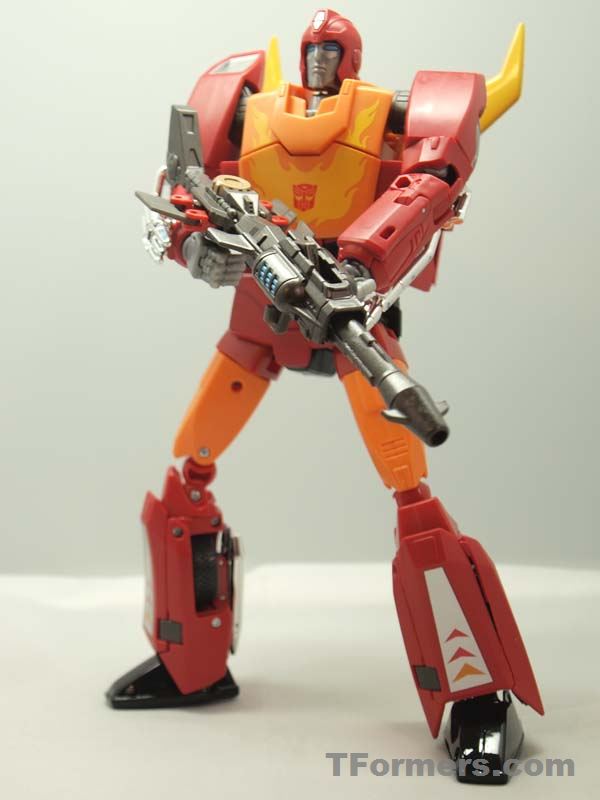 The 2 rifles can also combine to form the blaster that Rodimus Prime usually was armed with. While not completely accurate, it is in proportion and a nice touch.

(From Hot Rod to Alt mode)

Transformation can be annoying. While the top half of Rodimus converts fairly easy, the legs can be a hassle. Ensuring that all the bottom/rear half pieces align and snap in place will definitely test your patience. 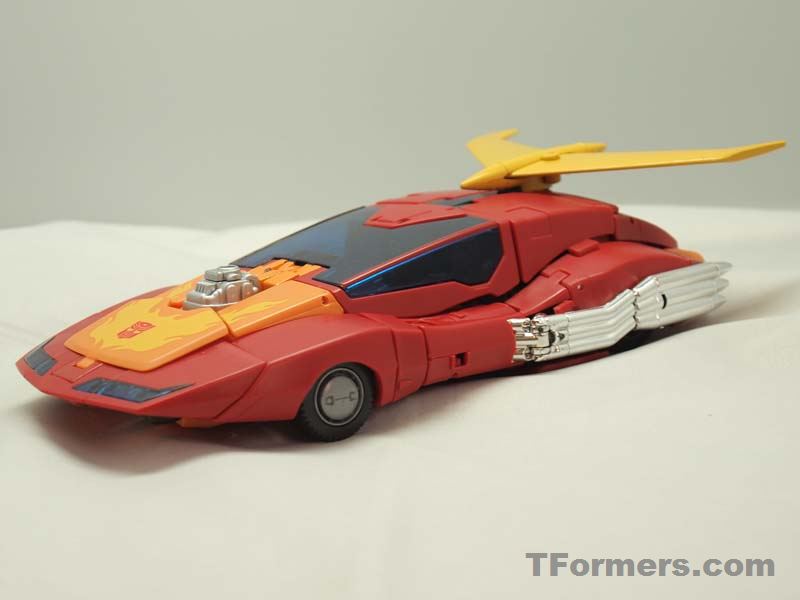 If there's anything that is virtually dead-on accurate, it's the alt mode. From first glance, it seems mal-proportioned. That's largely due to the tiny rear wheels and enormous front overhang. However, one watch from the G1 movie and you'll find that's how Hot Rod's alt mode looked too. 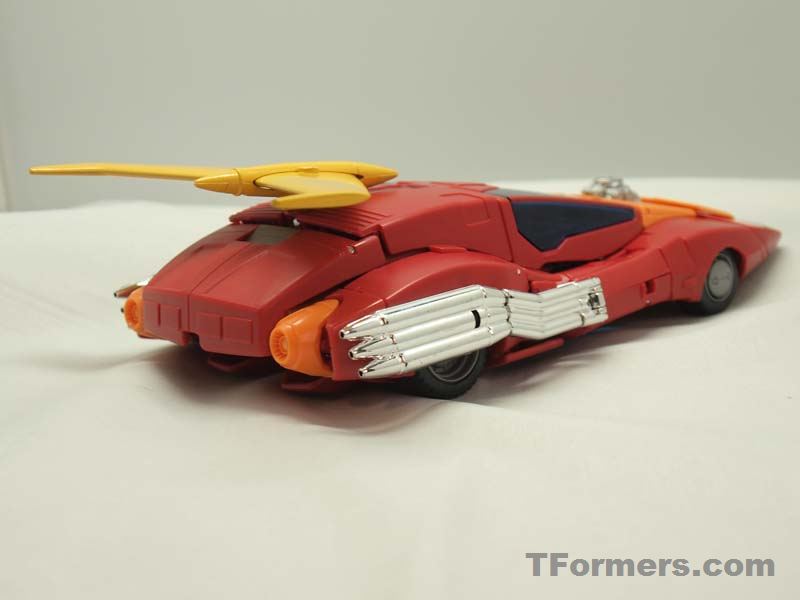 Although there's a bit of a gap on the lower rear end. all the details are accurate. From the wing to the triple stacked pair of exhaust pipes, everything is accurate. The cockpit window even opens forward on a hinge. Within the cockpit, you'll spy a steering wheel and 2 recess where the passengers' seats should be. The cockpit hinge is perhaps one foul point, as my example was already showing examples of paint wear. The cockpit window and headlights are done in translucent blue. 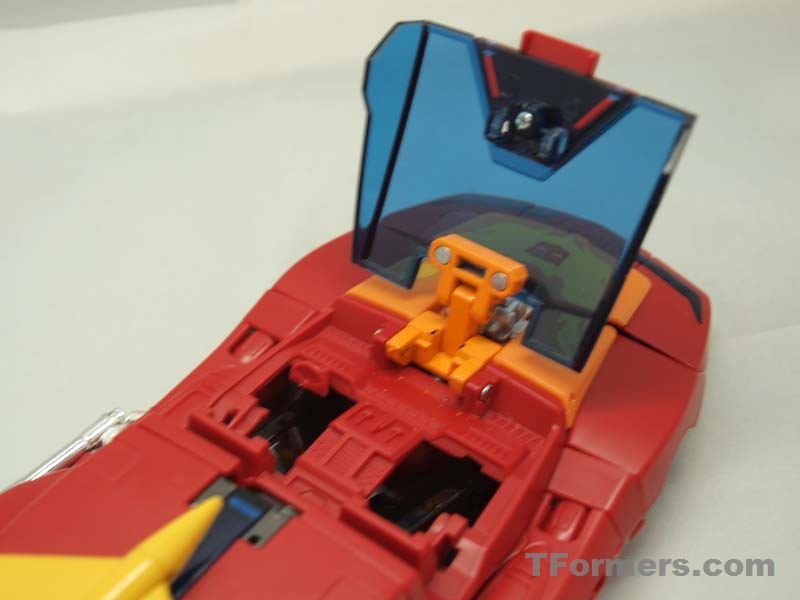 In a nod to his Targetmaster days, both rifles can mount to the engine block. Simply lift the top of the exposed engine to find the peg. While the 2 static rifles fit just fine, the stalk of Offshoot's weapon mode was too short. Therefore, I couldn't get him to peg to the engine. I suppose there's irony in that somewhere. 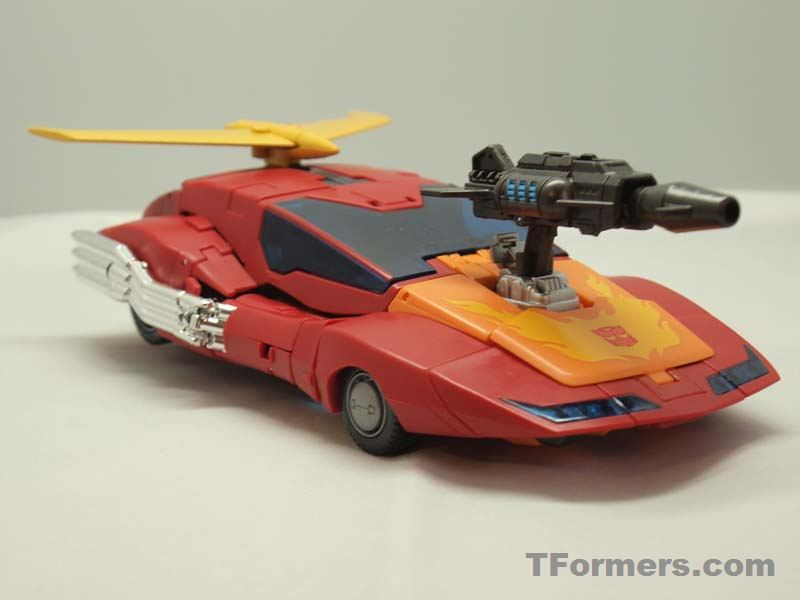 The value is where the great debate comes in. While the alt mode is highly accurate, the exhaust likes to wiggle loose. The leg plates also like to come off their tabs. Tabs that look to be easily breakable over time, especially since they like popping off so much. Then there's the paint wear on the cockpit window hinge that's already showing. The robot mode's floppy chest is another concern, as well as it's rubbing against the cockpit. The mini-matrix could very easily be lost if not kept in the chest. There's also the concern of the various small tabs found all over Rodimus and how they might fare under stress. Of course, there's also the fact that Rodimus Prime's Space Winnebago trailer is nowhere to be found. It would be nice to see this crop up as a mail-away or a later TRU exclusive, but I highly doubt that will happen.

I so wanted to adore MP Rodimus. Character aside, he was one of my favorite designs of Season 3. While he aesthetically pleases me, his fit and finish are less than desirable. There is simply too much that could snap, break off or get lost here. Versus some of the previous MP offerings, Rodimus feels less refined... almost third party in quality. While only $59.99 (a $140+ savings over Takara's version), the lack of the Prime trailer will weigh on fans' minds as well. Your best bet is to pick a mode and leave him there for awhile. Constant play with this figure will only lead to heartache.