ROTF Terradive was a late-series hit with most of the fans. With DOTM resurrecting some of the ROTF molds, there lied hope that Terradive would find new life. Thanks to an exclusive arrangement with Target, the Terradive mold lives again. This time, the character is Space Case, a tribute to the G2 seeker.

Space Case is fast. Really, really fast. His speed is the only reason he hasn't been blown out of the sky, because his malfunctioning mind is only slightly more complex than an average rock. He believes his survival is due to the glyphs etched on his armor, but really it's just hard to hit a target as quick as him. 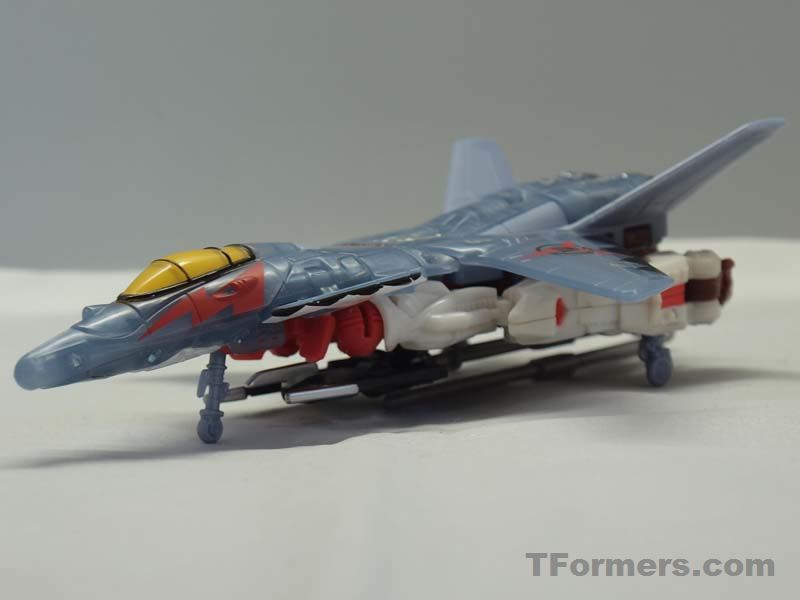 For a repaint, Hasbro couldn't have picked a better mold. Space Case's alt mode, in style, is as close as you can get to the 1995 original. At the same time, fans have been spared the bright white and crosshatch appliques of the G2 figure. Instead, you are treated to a translucent blue frame. Only the belly and rear fins are solid. Pretty rare for a US figure. Extremely rare for a store exclusive. 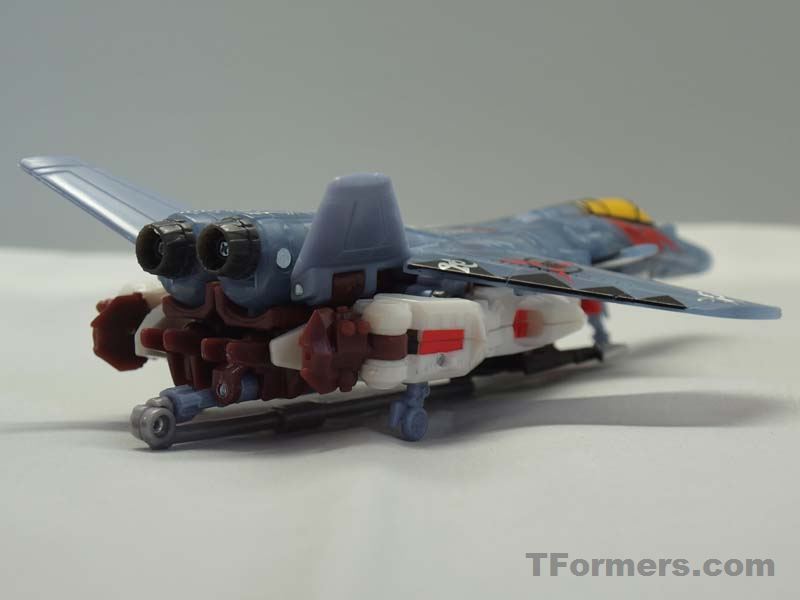 If the translucent body wasn't enough, you're also treated to Cybertronian glyphs on the fuselage, front stabilizer fins and rear engines. Each wing sports a Decepticon logo surrounded by a trio of lightning bolts in an electrical "Wye" formation. The 3pt landing gear remains, as there are no mold changes other than the material used. That also means Space Case retains the storage system for the spear.

Alt Mode Summary:True to it's roots AND a trick body job. Win-Win. 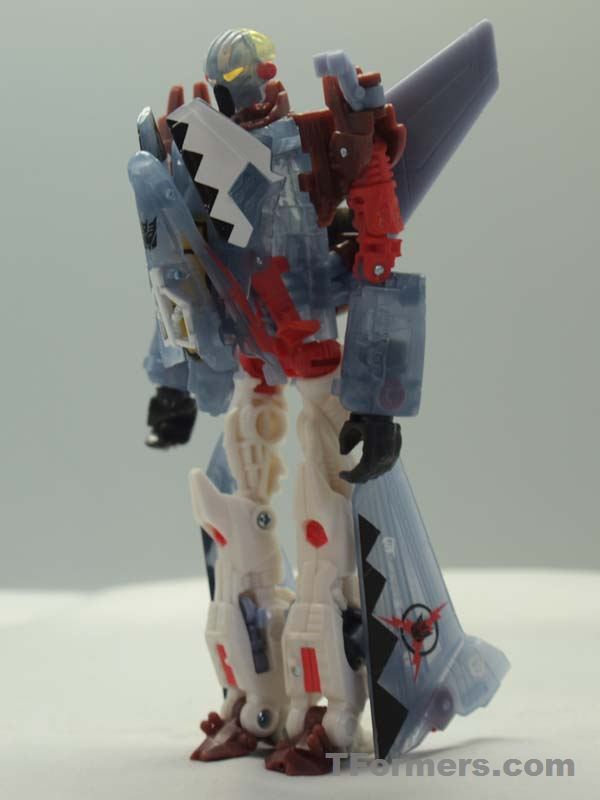 Again, you couldn't ask for a better tribute. The use of white and bright red on the legs and upper arms matches the G2 counterpart. The torso is close, even if the nose is pointing the wrong direction. The only out of place element is the head sculpt. It is unique to Space Case, but looks nothing close to his G2 head. What gives there? 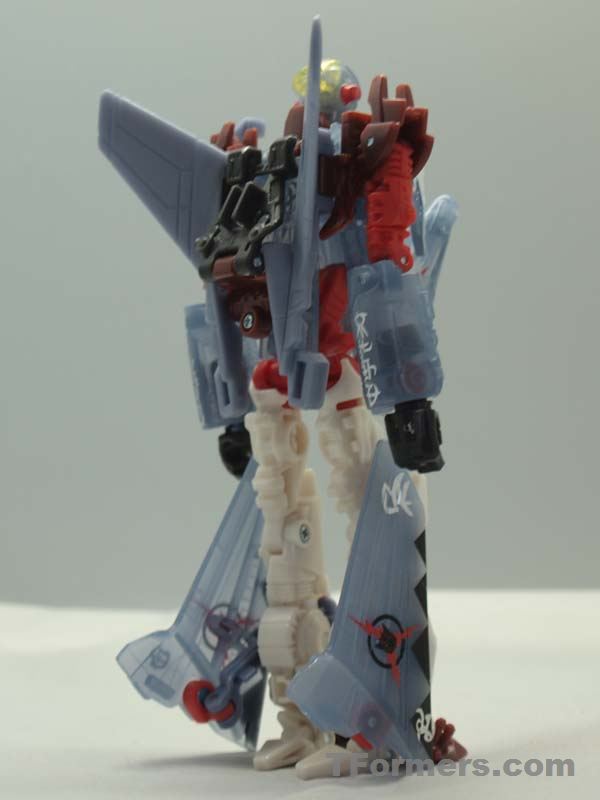 Space Case makes do with the same weapon as Terradive. That's not necessarily a bad thing. Thanks to the jointing of this mold, you can make great use of that spear. Unfortunately, like Terradive, the spear has very little detail when compared to the rest of the figure. 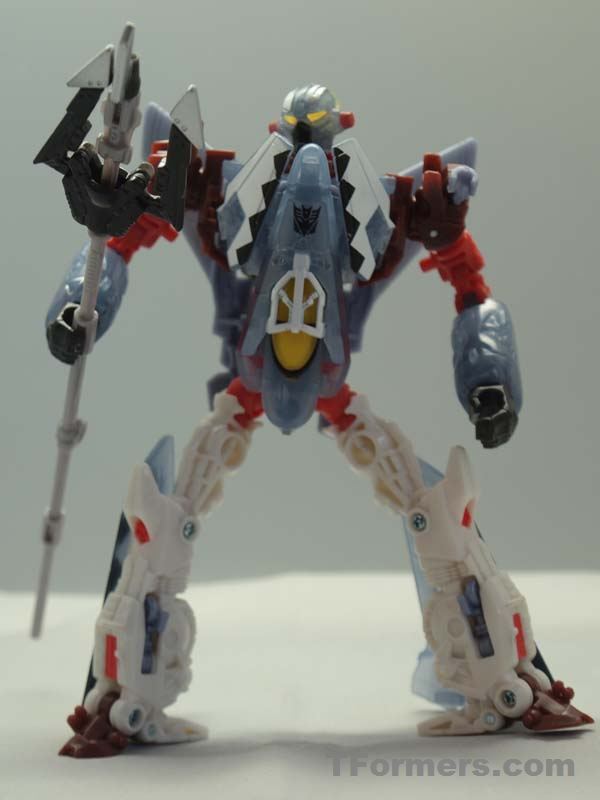 
Make sure the shoulder tabs are locked in place. Besides that, no complaints.

Terradive was well worth the $12.99 price tag that he had during the Hunt for the Decepticon days. Even though you can only find Space Case at Target, he's just as good of a deal at $11.99. Needless to say that he is the best pick of the 4 exclusives there. ROTF Arcee, 2007 Jazz (really?) and Bumblebee are just straight reduxes with glyphs. Big deal. Space Case is the only one worth finding. Not to say he's without problems. The hip ball joints pop off rather easy. His head is also known to pop off.

Some of you may have been hoping that this mold would turn up as Cyclonus one day. It still very well could. However, there's no complaints about Space Case using this mold. It's very spot on to the 1995 original in many ways. You can't go wrong with this repaint.