Store exclusives seem to be coming regularly for the Dark of the Moon lineup. Walmart got a few figures as exclusives, including first grab at a new DLX Prime mold. In return, Target has gotten a few exclusives of their own. Fittingly, one of these exclusives is a Human Alliance Wrecker who sports the Target logo. And he packs friends.

Steeljaw loves the feel of the wind whipping across his sensors as Leadfoot screams around a track. The cyber-dog is ill-tempered, rickety, and occasionally emits noxious fumes or sparks bad enough to set his surroundings on fire, but Leadfoot doesn't mind. Even the humans Leadfoot works with have learned to appreciate having a mean robot dog with a powerful bite around. 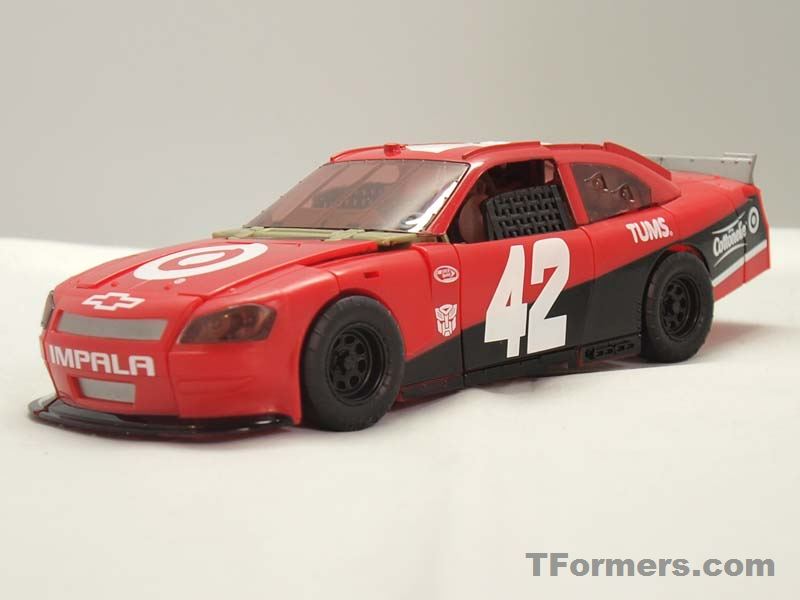 For those hoping that all the HA Wreckers would have a brute mode, Hasbro disappoints again by having a simple stock car mode for Leadfoot. It's based off the same Chevrolet Impala body that the other 2 wreckeers have. Since this is a Target exclusive, it's only natural that their bullseye be the prominent logo. But there are others as well, including Cottonelle paper towels, Evergizer batteries, Lysol and Tums. A Sprint Cup logo rests behind the front wheels. Other than a score of missing logos and a prominent black stripe on the lower body, the car looks accurate. 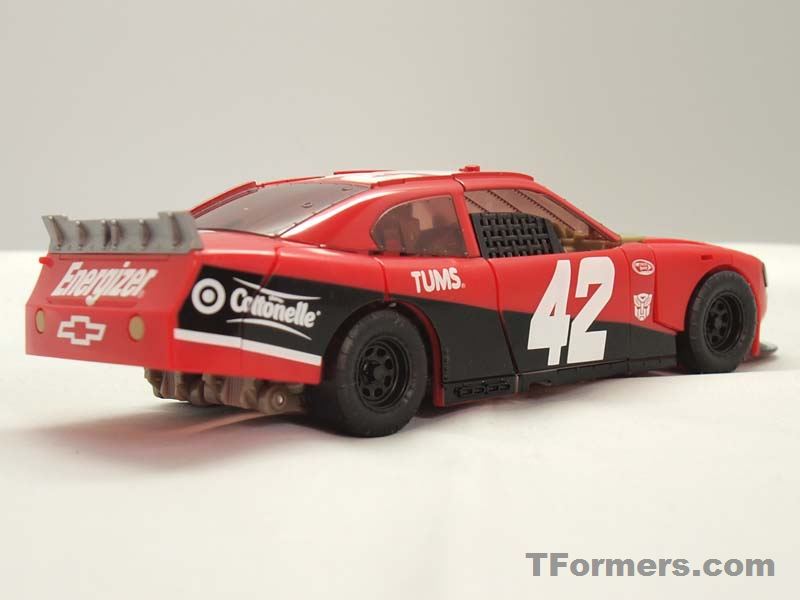 The interior gets the same treatment as Roadbuster. You get 2 seats, a steering wheel and a small instrument panel. However, no weapons for the alt mode. For screen accuracy, this is a letdown. However, for a simple NASCAR racer, it's decent.

Alt Mode Summary: It's no brute, but it'll do. 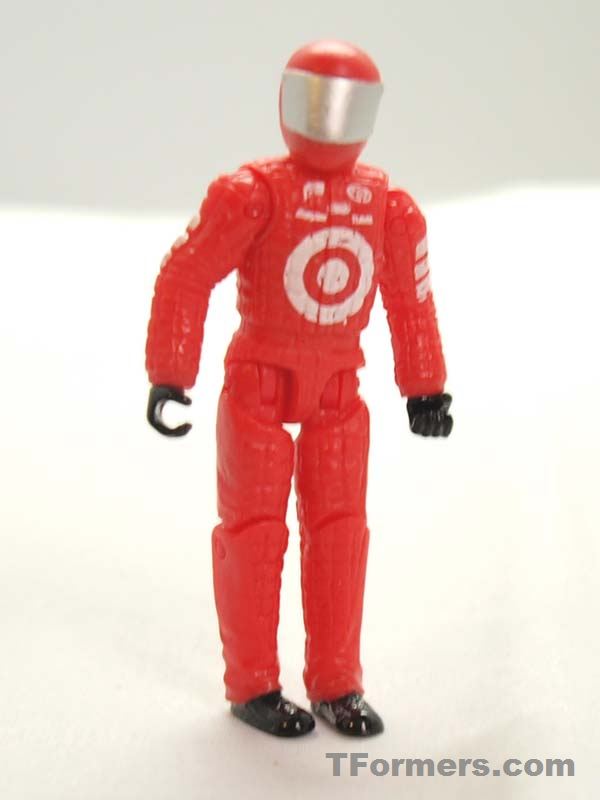 In real life, Car #42 is driven by Juan Pablo Montoya. For the HA line, we get the anonymous Sergeant Detour. He's so anonymous, he's not even mentioned in the bio. More attention was paid to Steeljaw, but we'll get to him later.

In my last HA review, I mentioned that Roadbuster was perhaps the hardest figure to transform. Now he's the 2nd hardest. With Leadfood, the chest area in particular can be a pain to get right, as the doors don't want to fold in like you think they would. However, like Roadbuster, he does get easier with every transform. 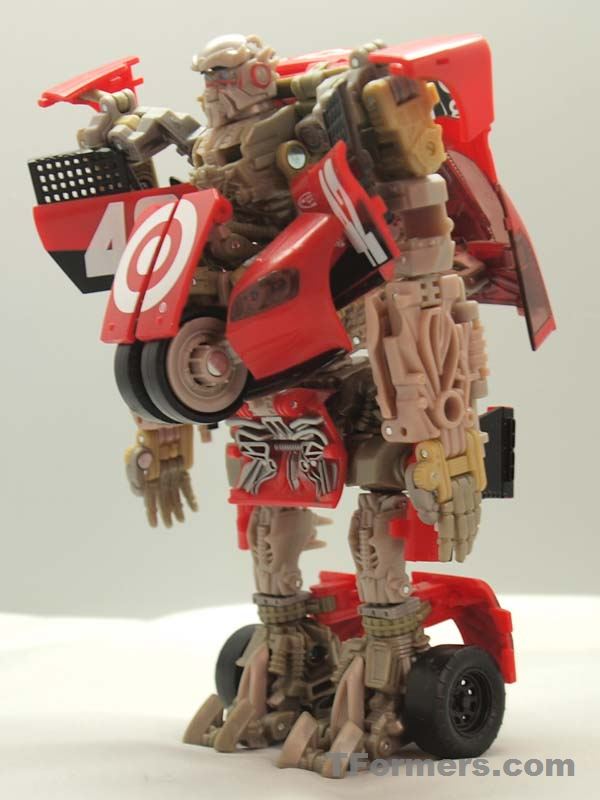 Leadfoot just doesn't seem to look quite right in robot mode. The beige on red doesn't do much for his contrast, and he is considerably stubby looking for a Voyager class figure. In fact, he's 1/2" shorter than Roadbuster. The 'pot belly' look of his abdomen doesn't help his overall profile much either. The head sculpt is a bit plain, but the hidden visors help bring it to life some, via a tab behind his head. Oh, and yes, I did not flip up the hood piece behind his head. My bad. I wanted to say that before all the hate mail and death threats came in. 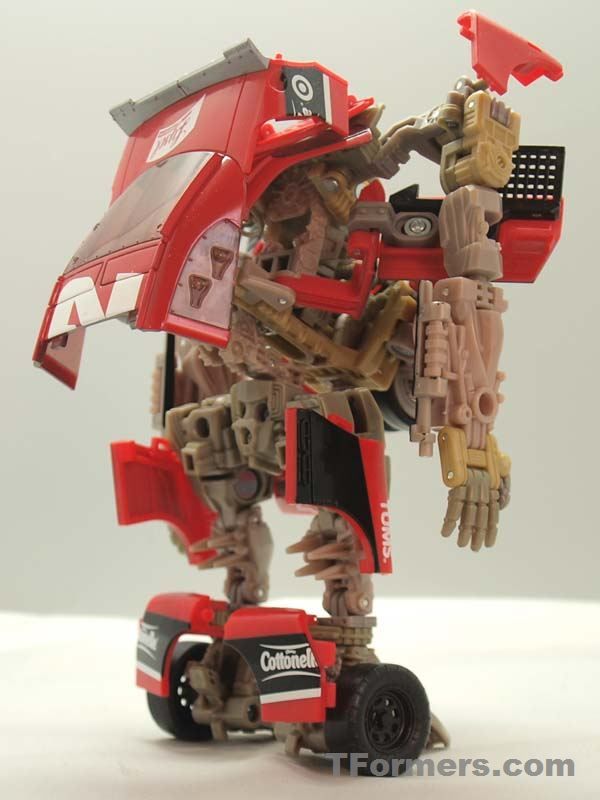 Leadfoot has no weapon of his own, but he does have his cybernetic pooch named Steeljaw. Steeljaw comes with a chain leash so Leadfoot can take him for a walk. Cute, I know. However, Steeljaw can also transform into a handheld missile launcher. Or, if you prefer, a shoulder mounted missile launcher. Either way, he packs a launchable missile. However, said missile can't be stored while Steeljaw is in beast mode. Just watch for the drool from the tongue hanging from his mouth. 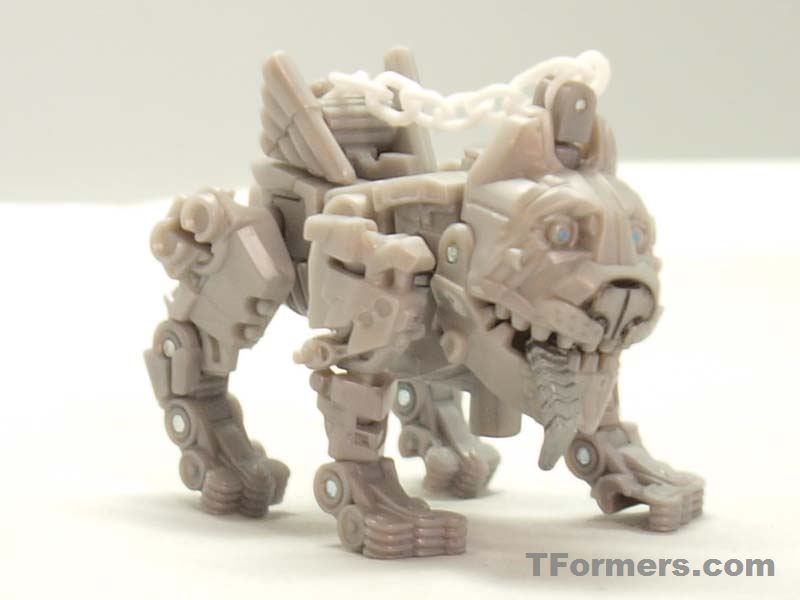 Back to Sgt Detour. By flipping up Leadfoot's chest, you can expose a pair of machine guns. Just make sure you peg Detour's hands to the guns, because there are no foot pegs to keep him in place. Sadly, that's the only human interaction. I dunno who was supposed to get more attention, the human or the cyber dog. 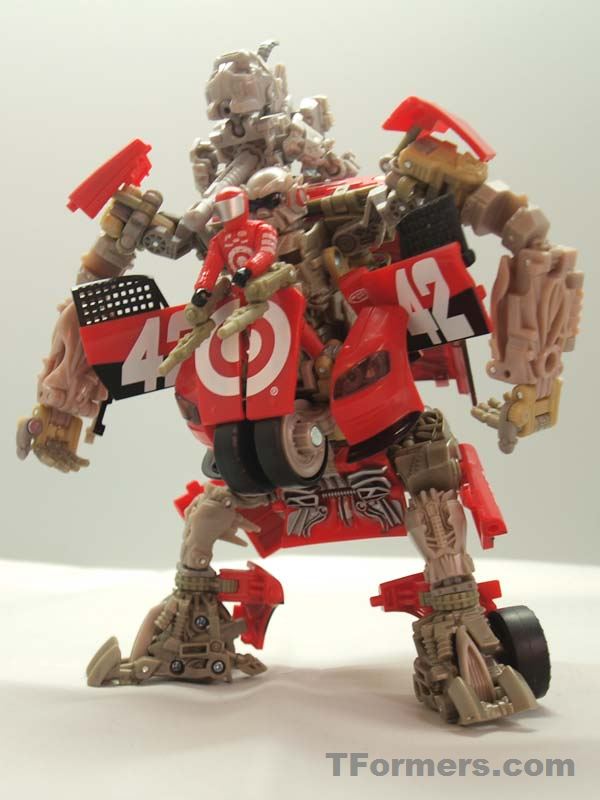 
The elbows are restricted somewhat by the folded up seats. Otherwise, articulation is decent.

There are a lot of small tabs that can stress and break over time, so you'll definitely want to use care when transforming between modes. The human figure seems almost like an afterthought, with Hasbro giving more love to Steeljaw. Nothing wrong with that other than this is a HUMAN Alliance subline. You'd think they'd give more attention to the human. At any rate, if you can get over the shortcomings of Leadfoot's robot mode this isn't terribly bad.

The alt mode is a bit boring and the robot more is ugly at best. At least, if you transform it like Hasbro wants you to. A few searches on the web wield some fan robot modes that come off looking much better. Has Hasbro been uniform and made all three Wreckers using their brute modes for the HA lineup, this would have fared better. As it is, Leadfoot won't be for everyone.