It's not too often that a Deluxe class flight mode Autobot comes around in the Bayverse. Of course, when they do come out all the G1 fans expect some sort of Aerialbots tribute. Until now, that really hasn't happened. Although a tribute in name only, Air Raid now makes the scene via DOTM gussied up as a recon jet.

Flying high above the fray, Air Raid provides a high-precision picture of the terrain, Deception troop movement and any other details of the battlefield that may hinder an Autobot assault. His battle shield converts to a powerful ion pulse blaster when his fellow Autobots are in need of some high-altitude reinforcement! 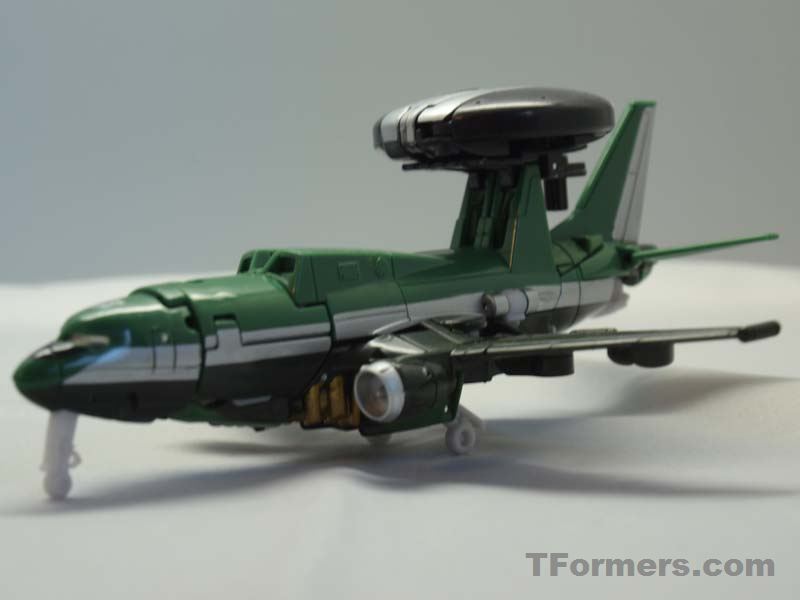 Funny how the name Air Raid gets assigned to a reconnaissance jet sporting a radar dome. The jet is forest green on the bottom, medium green on top with a silver stripe down the middle. There's also a silver stripe on the vertical stabilizer. The jet is propelled by a turbine on either side. The radar is mounted on a pedestal located near the tail section. While the radar is removable, the pedestal isn't. 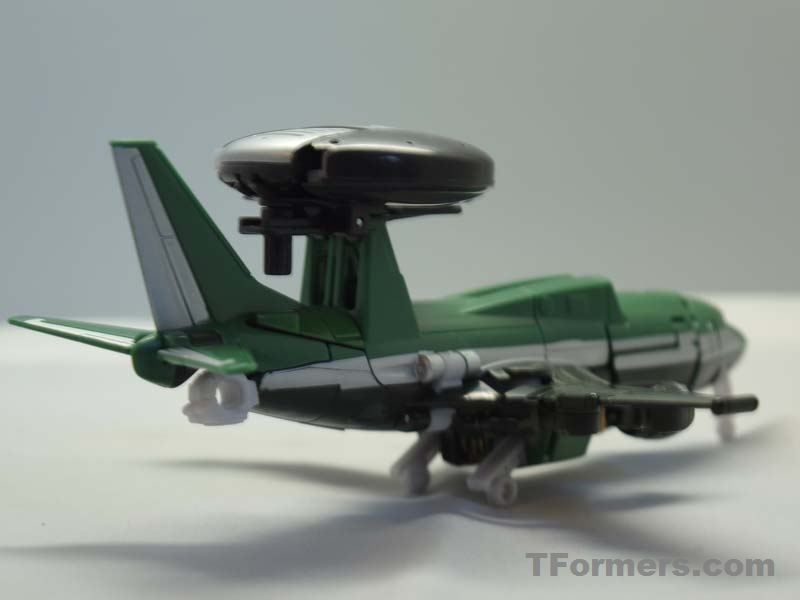 Air Raid has retractable 3pt landing gear. However, with the radar dish attached there is a weight bias towards the back. Therefore, you have to keep the rear wheels folded completely back to keep the jet level. The MechTech is nice, as it can convert to a roof mounted blaster, but like most other Deluxes, it can't be locked. One interesting note is that there is a peg mounting on either side of the wing to attach additional weapons. So he could serve a dual purpose.

Alt Mode Summary: A nice jet, but has some balance issues.

While involved, the transformation is relatively easy. The top of the jet becomes the legs, while the rear underside of the jet are the arms. The cockpit ends up sitting on his back. Just be careful of the legs, as they like to easily pop off the hip ball sockets. 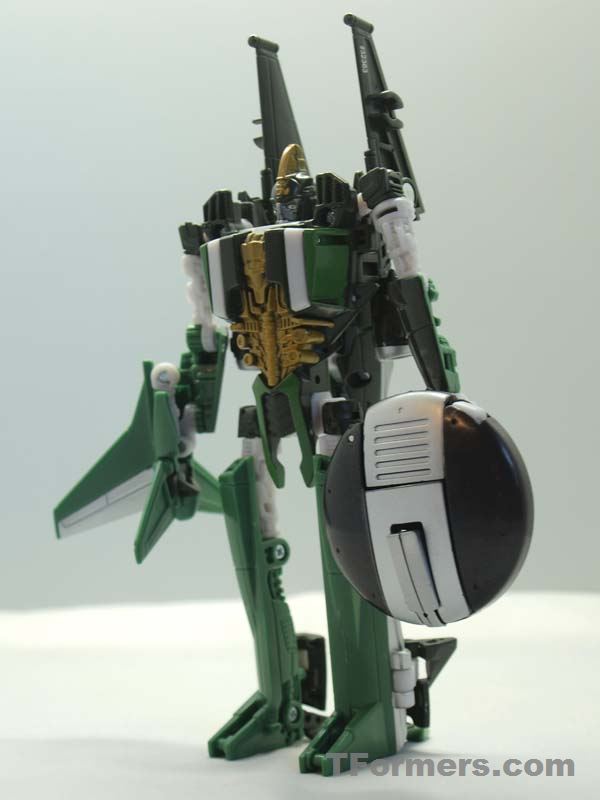 Though initial pics of Air Raid weren't very flattering, seeing him in person is a bit more redeeming. The green motif remains, but is complimented by a mostly gold chest with white upper arms. If Air Raid isn't left handed, he's gonna have a hard time with anything since his right hand is the tail section. Something like that can end up being a deal breaker with some people. In a curious trend as of late, the piping for his eyes is clear. The head sculpt is interesting, but would strike you as being more suited to a water-based alt mode robot than an air-based one. 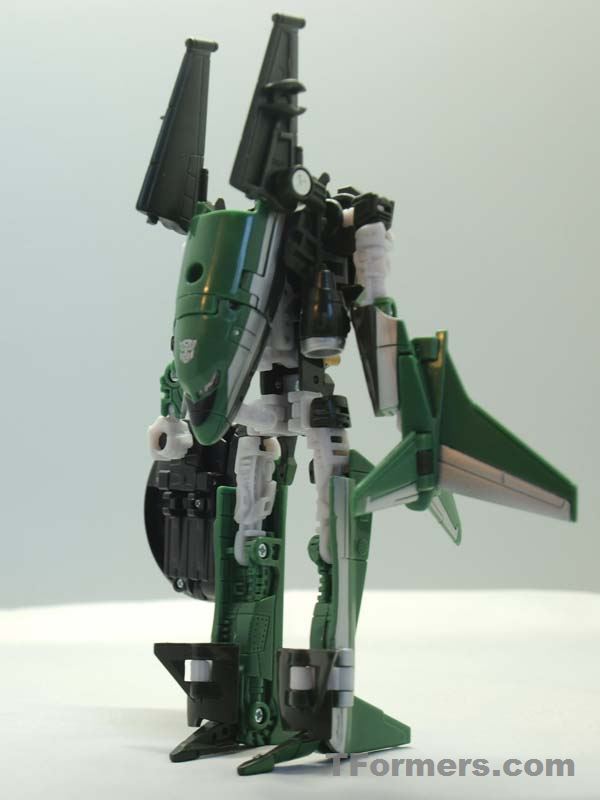 The nifty part about having a tail section as a right hand is it can double as a close combat weapon. What's more, the tail can extend via 2 rivet pin joints for extended reach. With this, you can use the radar dish for 2 options. You can either leave it in it's dish mode as a shield, or you can press in the ribbed section to extend a blaster. It would kind of help if his left wrist wasn't so limp. Also, those 2 peg recesses in the wing are completely useable in robot mode, so he can have an above-mount weapon or two. 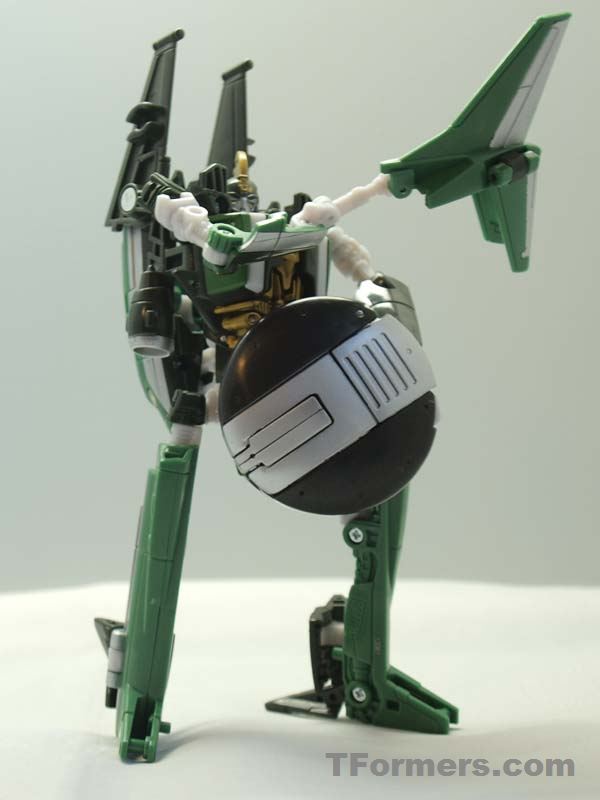 
The set up for articulation is pretty good, but there were loose joints in various spots. Might need some tightening up out of the package.

The hip joints are loose and the legs tend to pop off pretty easy. I also had some joint issues with the wrist being loose. They could be isolated incidents, but some minor maintenance could be in order. Overall, a slightly above average Deluxe.

Air Raid surprised me a bit. I was expecting a mediocre effort at best due to previous photos that were released. However, in hand he's not that bad. His jet mode is pretty realistic and his robot mode is pretty sharp looking. Just take care of one or two potentially loose joints and he's worth picking up.