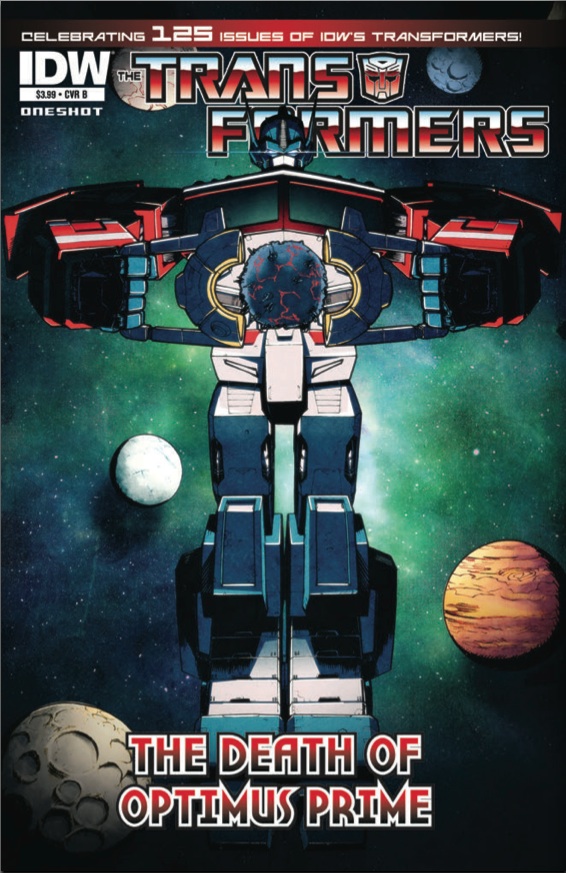 He's got the whole world in his hands...


Death of Optimus Prime was released this week in comic shops everywhere. One of my most highly anticipated moments of 2011. Not only can you walk into a local comic shop and find this issue but you can get it same day as print on your mobile device now too. And it is a game changer, one that I am happy to have had the pleasure to review. Co-written by James Roberts (Last Stand of the Wreckers, Chaos Theory) and John Barber (Sector Seven, Foundation, Rising Storm) this issue is definitely one you'll want to get your hands on!

So lets just get down to what everyone really wants to know...

Yep… that is one BROKE Matrix!


Who knows what happened for the three weeks he was gone? But Optimus Prime is not dead at the beginning of this comic. And he quickly learns he hasn't gone all that far. Following Optimus Prime's point of view, we find the fate of the Autobots, the Decepticons, and the thousands of other non-aligned Cybertronians which have come home. (And what brought them there.) Is there a place left for a war commander like Prime? Many of the new arrivals would beg to differ, as they put the pressure on the Autobots to leave the planet. And they mean business as the conflict builds and explodes while Autobot high command struggles to come to an agreement on what is the best course of action?

There is a clear division within high command: those who want to stay and rebuild their world, and those who mean to search for those who set up their world to begin with… those who could help them rebuild what they lost. Will they be allowed to leave before the mounting non-aligned Cybertronians tear them apart?

In the mean time, Prime sees a clear problem. He's become the symbol of the war. For the Autobots to have a chance of making a future, someone has to be the sacrifice to appease the returning citizens of Cybertron. Or risk standing in the way of peace. Something that Prime just won't do. As Optimus prepares to make the ultimate sacrifice, it's not enough to unite Autobot high command. And what of the Matrix? What unknown knowledge does it hold in it's current state?

Oh Bumblebee's slippery slope, he's not treating those Cons very well is he?


This is an issue where several ingredients are being added to a huge pressure cooker. Ingredients that will undoubtedly be explored and built on in the coming two ongoings. A handful of new recognizable characters like Metalhawk and Ratbat have been added to the mix and already the seeds of unrest have begun to be planted in what is sure to be a grab for power in the coming issues. But on the other side, those who plan to leave have all the mystery and wonder that the secrets of the Matrix is just now beginning to reveal.

Prime's path through this comic is one of implied introspection. He's on every page except three. Everything around him from the start till the final outcome of the end only serves to illustrate exactly why he comes to his conclusion. (He's not a moping character in a corner, his presence is actively involved throughout the story.) It's not that he's unable to command, or make the best decisive decisions. It's not that he couldn't intervene and solve the problems that are ripping Autobot High Command apart. It's about what is best now that the war is truly over and even the ending result only continues to prove exactly what kind of a character Prime is. And while it may appear to be altruistic, it's also admittedly selfish. Which was the real clincher for me when I read it. This Prime is fallible but in a emotionally mature sense that until now we haven't seen. Roberts and Barber have a clear grasp on the character of Prime. And if this only piggy backs on what Roberts gave us in Chaos Theory (Ongoing issues #22 and #23), he continues to blow me away.

And now for some Cracker Jack Decoding!


But Prime isn't the only one who gets the spotlight. We get moments from Prowl that are eye opening. And Bumblebee as he starts to come into some pretty hefty decisions. (Ones that I say, make me believe his ability to lead rather than further evidence why he shouldn't be leading.) Every brief moment were a character has a moment on the page is not wasted as both writers, Roberts and Barber, craft the essence of what I expect will be the fore runners in the Ongoings come 2012! And it's exciting!

This dense read does exactly what we've needed for a good two years. It gets all IDWs ducks in a row in an issue, from point A to point M! Then neatly disposes of Optimus Prime in a way that makes complete sense. I'm not worried that they won't have a compelling plot because with this level of detail and finesse, 2012's two ongoings will be the stories these comics have needed for a long time.

The writing on this issue feels seamless. You really don't feel that Barber or Roberts have pulled apart to tell too much on their own series. It meshes really well. And I'd go as far as to say I think they could co-write well together. We already know they will be collaborating the Ongoings as the story continues. I have absolute faith in their ability to do so in this one issue. The dialogue is interesting, we have comedic moments, as well as Transformer references (not any that require a new reader to go and read previous material to understand either), it feels really thought out and methodical. 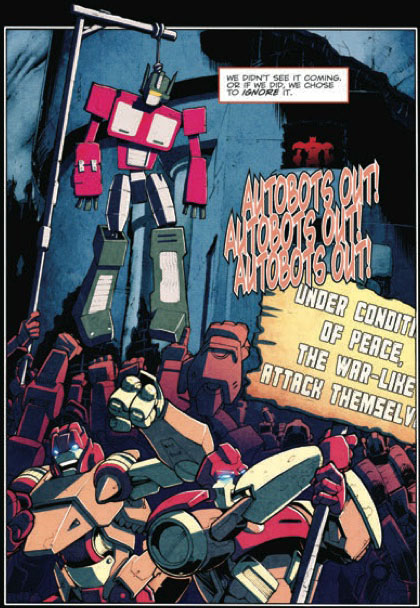 I think if they get a hold of Prime, they're gonna eat him!


Nick Roche (Infestation, Last Stand of the Wreckers) is paired with colorist Josh Burcham (Last Stand of the Wreckers). Both have been sparse in the last few years, but that hasn't caused the level of their craft to slip in any way. The designs are fresh the coloring spot on. It reads like a Transformers comic. Roche has definitely continued to represent a unique and solid style. Again, if you've not been a fan of Nick's work, you may still not change your mind. But for someone like myself who hasn't seen his work for almost a year, I'm very happy to have him back crafting Transformers again. Every panel is filled to the brim. Roche tells a story not only with the character packed plaza, but even in the simplest panel with a face shot. Both background and foreground are expertly used. And Josh makes it that much more outstanding with his use of color. (We'll see more from these two next month!)

I've heard many a fan in the past say that Transformers can't sustain without Optimus Prime and Megatron leading the conflict. But this issue convinces me that is not the case. And I'm willing to give Barber and Roberts their say for the next six to twelve months on the strength of this issue alone. I can only hope readers and fans of Transformers comics will give them that same chance too! Transformers comics are on the brink of being the best we've seen in years. If you're ready for good story telling, Roberts and Barber mean to represent.