Fans have never been more excited than they are now as we hang on the cusp of the next big thing in Transformers comic history! IDW Publishing launches its first of TWO Ongoings for 2012 tomorrow, Wednesday January 11, 2012. More Than Meets the Eye issue 1 written by James Roberts and draw by Nick Roche, also colored by Josh Burcham. (The reunited team who brought us Last Stand of the Wreckers back together for another issue.) With this much stacked on one comic issue alone fans have a right to be chomping at the bit for this spectacular launch. So, does it really give us what we want or does it stall at the starting gate?

WELL, OF COURSE IT ELECTRIFIES THE MASSES!

(Sure I'm sounding a bit like Zeus there from Tron, but it's what comes to mind, that excellent moment just before Daft Punk starts playing its beats of technologic musical genius.) Yeah, this could be that awesome. Roberts, the equivalent of the Son of Flynn (er Transformer comics born and raised), just stepped onto the game grid. Get ready for some excellent bad ass-ery of story telling, disc throwing game switches you didn't see coming, and mind blowing elements of Transformer-dom that haven't been touched on in years, if ever!

Okay so before I get too far ahead of myself and explode with fan gushing that triumphs anything I've already previously said for the last year about this art team… Lets just get into the meat and potatoes of what this issue is really all about: 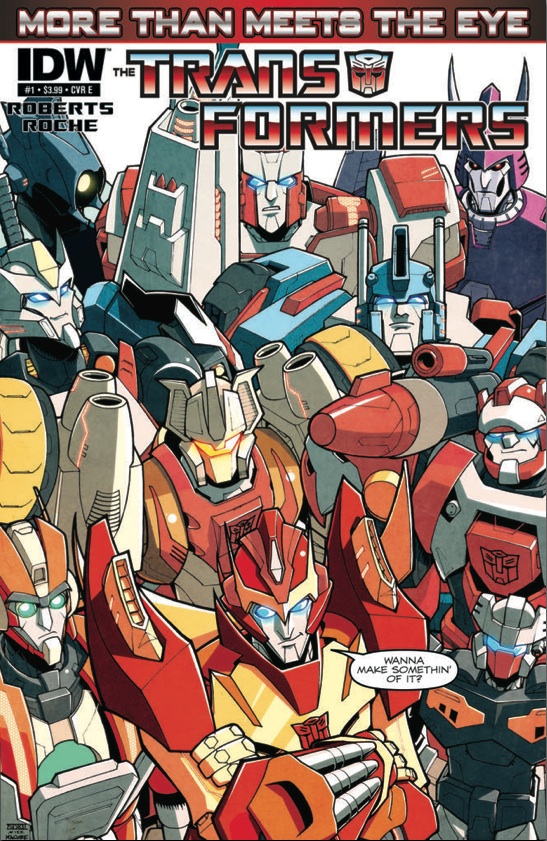 Your future Lost Light crew members, remember these faces fans! We are in for one wild ride with them!

This is the wind up to the adventure of a Transformers lifetime. This ranks right up there next to… well, where the first Cybertronian realized he could change shape, where Nova Prime told all of Cybertron he'd build an Ark, and Optimus Prime stood in front of Megatron and refused his only invitation to surrender. It's history in the making. It's Rodimus Prime giving an amazing speech, possibly written by Drift, where he motivates his fellow transformers to join him in his journey to the stars and in search of their ancestors. Seems simple enough right? (Out of the words of Springer…What can possibly go RIGHT?)

Certainly there are naysayers. But this is right where it all starts… the ones who are getting on board for the adventure of a lifetime, or just because they really need to get away from what they've been doing for the last 2 million years! I'd like to say that this issue chronicles the reasons why five bots mean to go off and find their destinies… but it doesn't. It says 200 sparks have decided to go with Rodimus and then it just starts building the conflicts of a select few individuals, without dooming the journey outright. But really illustrating, this is not a band of epic questers of a forgotten relic of a past… but a rag tag ship of misfits, has beens, and a slew of characters previously never before seen. This could make for a big question mark of an issue, but Roberts track record has proven in the past that he can pull characters out of toy obscurity and make us care about them. (Also, increasing the price value of said toys.) Amazingly enough, he's already been building some of this story to begin with by what has come before… Chromedome, who was in Chaos is also a passenger on the Lost Light, the vessel meant to carry this bunch to the twinkling heavens.

The Tron like battle in the middle of the comic, yes, I am going there...

The final outcome of the issue conclusion is not just that the Lost Light leaves Cybertron, but the twists around its take off and the inclusion of a few characters you'd never expected to go on this journey. It's a boat full of wild cards and unpredictable outcomes just waiting to happen. Its Ultra Magus's worst nightmare, It's what Prowl can't LET happen, what Bumblebee fears, and what a handful of characters can't live with anymore. It's twisted and rolled into one adventure that explodes onto the comic page, quite literally as you'll see not a good start for the adventurers… but a spectacular beginning for this Ongoing comic. And it doesn't end there. Even the final lines promise not to disappoint… a tease of what's to come. A message from the future…

We're getting the total package here. Characterization, conflict, twists, consistent pacing, humor, amazing dialogue, world building, fan nods… I mean what is this issue missing? (And yes it is all in 22 pages.) I know I gush about Roberts as a reviewer, but it is well earned. This issue proves the reason why it's exciting to see James Roberts writing his own series of Transformers. He's carefully constructed his first issue. He's got a vision and he's focused on not just executing it to the best of his writing abilities, but he's carefully adding the little details that to date have been missing from the comics. And there is emotion in this as well. You aren't just getting a reiteration of one bad ass to another hot head… your getting the zealot, the grumpy old man, the psychopath, the optimist, the realist… the personalities that vary from one character to the next. Flavors of variety that have fallen flat until now. The goal of the issue seems clear… get off the planet. But it has so much more complexity when you add the lose cannons and unexpected moments that drive the point of this issue to its final outcome. And the humor, it only softens the hard reality of just how doomed and lost this company may be in future issues. What is great about Roberts is his consistency to his writing style. You aren't going to get a promise of a comic series… you are going to get a story chalk full of characters you will learn to both love and hate and a story that takes you on a journey. You become part of the crew. And that is successful storytelling. I give the highest praise to IDW for this decision and Hasbro for putting their stamp of approval on it. 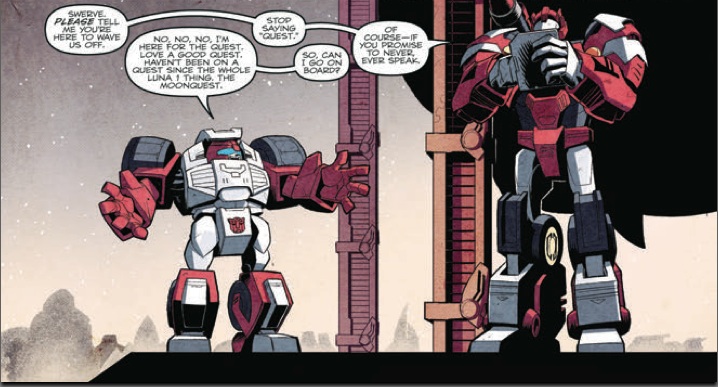 Better recognize that this is no quest… but a test to see who's worthy...

And let me be the first to say that the art delivers 100%! Nick Roche and Josh Burcham, conjoined twins of artmaking! This is Nick's style gone crazy! It may not be for everyone, there are certainly exaggerations that attempted else where would be too whimsical. But here it doesn't hinder the story at all. It enhances it. The angles are interesting, the composition fluid. I'm just really pleased with everything that is being worked out here in terms of imagery to tell the story. And the coloring is great. Josh is completely suited to Nick's lines. There's a commutable feel between Roche and Burcham in terms of aesthetic. (It's why I call them conjoined twins.) And the only disappointment is that Nick will not be continuing his run on the story after this issue. This isn't the only place where I've moaned about it, but in the end, I can't see Roberts taking off without Roche there to see him off. The two of them have shared an amazing knack to start and finish each others sentences in the past. But they are distinct individuals and either of them alone stand amazing feats of work. Nick's salute to James has been the opportunity to join him again for this short time on the start of his own Ongoing. It just seems right. And the blast off in terms of artwork is reaching to what drew me to these comics in the first place. I'm more than pleased with it.

So lets see here, we've got Tron and Clu… and the naive one… guess which is which...

So if I haven't convinced you yet to read this… then this last part probably won't either. Its just this… as fans we think we know what we want but very few times do you find that someone out there has the vision and the guts to put things in print which are exact what the consciousness needs. There is a flair in this work that speaks to an old school need. As I've been reading the Marvel run slowly, there is an under current that begins in those stories which I see influencing the work we are getting now. (I can't articulate everything into words yet as I've only scratched the surface of the stuff that's come before.) And I can't help but be mystified by it. It's no secret that James and Nick both where raised on Transformers comics, they've talked about it in interviews and comic panels. It also makes perfect sense that with a past like that, it brings to mind ideas of destiny and fate. But I'd be lying if I didn't say that it has crossed my mind too many times how lucky we are to have human beings born and raised on Transformers, and even twisted by them, now writing them. If the conditions are right, they just manifest. And so with that I bid all fans to come and see what happens when you cross old school with the new school. You get the son of our maker. James Roberts is to Transformers what Isomorphic algorithms are to the game grid. (Bio-digital jazz, man.)