Out this week is the twin brother of the Transformers Ongoing saga unfolding in 2012, Robots In Disguise issue 1 written by senior IDW editor John Barber (Sector 7, Dark of the Moon Movie Adaptation, and short story Convergence) and drawn by Andrew Griffith (Foundation). This may be the second of the two Ongoings but don't count this series any the lesser of the two because this comic my friends has a unique voice and has held it's own and I personally can't wait to read next months issue! 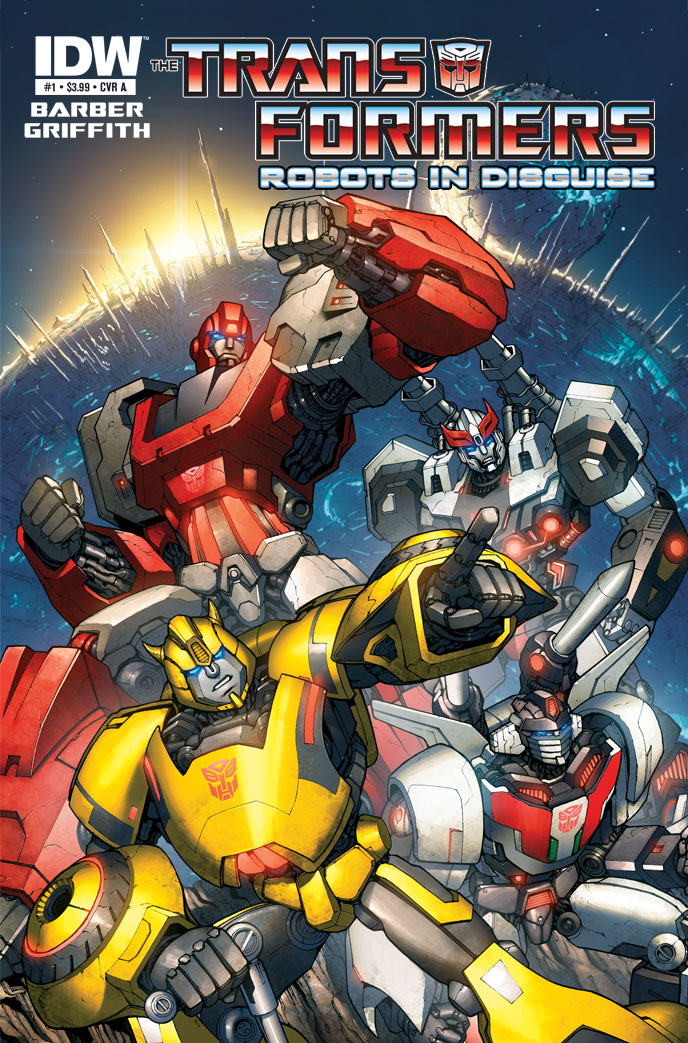 Bumblebee says, "Look over there…" And then mumbles, "Made you look…"

But before I go all fan girl about this particular issue… it's best to actually talk about what this issue sets up. First and foremost this is an issue that focuses on Bumblebee. Not the naive and easily trusting character from previous incarnations, but the leader that he's becoming. Yes, I did say that, Bumblebee can most definitely be a leader. And this is the first time where I believe that it is very possible. Not because he's the perfect embodiment of the hero and wise commander Optimus Prime was, but because even against the odds he's passionate about not giving up despite being surrounded by conflicts and obstacles. And that is very relatable. It's a bold new paradigm for Transformers, one that some fans have been calling for, and other's will probably snip Barber for. This is a new direction and I for one am pleased with the results.

The issue illustrates that despite Bumblebee's best efforts to keep order and greet new returning Cybertronians he's fighting a battle of manipulation and political maneuvering with both Metalhawk and the Decepticons. And from within as well, as Prowl meets with unseen allies that have yet to be revealed. Some of these conflicts are out right in his face, and some of them are seeds being sown that will continue to play out issues to come, as Barber has proven in his past Sector 7 work. The beginning of the issue Bumblebee greets a newcomer, only to have Metalhawk expertly swoop in and charismatically win him over. But the words Metalhawk uses then come to bite Bumblebee in the tailpipe later as he informs him of the rumors that are flying. Meanwhile Prowl is having a time trying to keep the Decepticons in check. Those who are duly deputized enforcers of the peace also take it as their given right to hand out lessons in bullying. Luckily before any major damage is done, Prowl and a few Autobots intervene. But we find out by the end of the issue just how far some of the Decepticons are willing to go to make a point both directly and indirectly involved. We also find out how far Bumblebee is willing to go too. Ratbat is definitely vying for lead in the scheming department. His agenda is yet to be revealed in this issue but one thing that is revealed is the control the Autobots think they have over the Decepticons. It's an illusion that may or may not be controlled by hidden benefactors. And Prowl is very aware that Ratbat is going to be a problem. 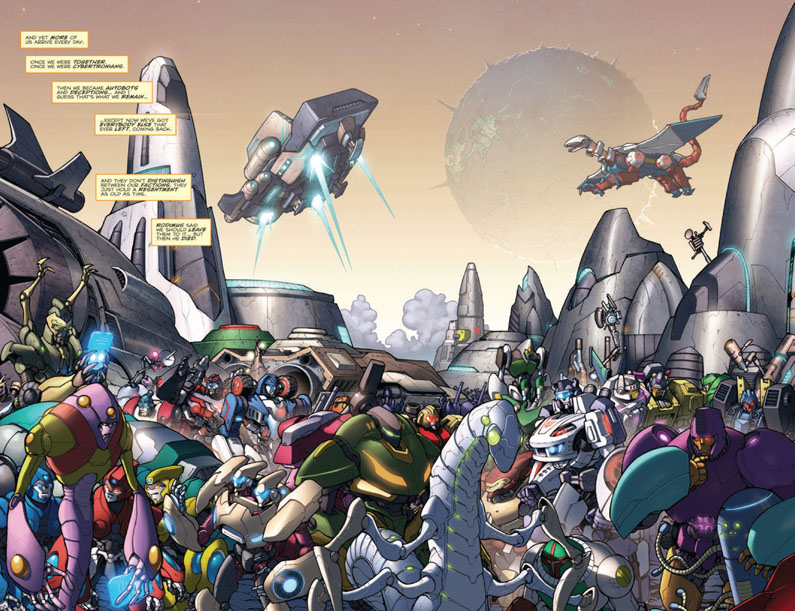 If I could describe this issue in a word, it would be CONFLICT! It's dripping with it. There are conflicts being sown left and right. Conflict between characters, from different factions, between allies and foes, and even with the environment. It's not confusing or overwhelming but it's expertly balanced, and he did it in one issue! All he has to do now is continue to clamp the vice and he'll have me hooked for issues to come. And Barber doesn't stop there, he proves his understanding of these characters in one issue too. Bumblebee acts and feels like Bumblebee, Prowl acts and talks like Prowl… it doesn't feel forced. And if you haven't read the previous two issues (Death of Optimus Prime, and More Than Meets The Eye #1) you aren't left feeling lost. He brilliantly uses the running narration throughout to thread the important details through the issue without info dumping. (That was most impressive.) This can literally be your first issue if you want to only follow one series of the two ongoings. (Not that I recommend that because they are both brilliant.) Barber makes this look as easy as breathing as he's crafted a solid issue. And I can't wait to see the story unfold.

And by his side once again is Andrew Griffith, who makes a smashing entrance to the Generation One continuity with flying designs and then some. Last year he did a single mini with his name solely on the title. This year he proves he has a right to be on the Ongoing drawing duties. He's essentially the new guy and he's handling this as if he's done the work for years. Before the end of this year we'll definitely be hearing his name right up there with Su, Milne, Guidi, Figueroa, Roche, and Coller. He's got great expressions with his characters and a great handle on how to draw Transformers. And paired with him is seasoned veteran Josh Perez, who's brought his a-game to the project as well. It makes for a beautifully articulated comic. And it's nice to see all the parts on this story are firing at top efficiency and as one.

It's really amazing to see IDW's senior editor is the guy that is directing the ship and has a total handle on his understanding of Transformers comics. I look forward to as many stories as he can give us, because there's no doubt the right man is at the helm and he's delivering one grab you by the throat issue. He's going where no Transformers Editor has gone by a continual storyline he plans to deliver for a while. He's the Captain of this boat and I feel daring enough to say this is going to be a really great run that will leave fans chanting by the end… "O Captain, my Captain!"