Don’t mess with Sky Shadow – he’s one of the most foul, dark-hearted Decepticon in the galaxy. He takes no prisoners and always finds his target. Even the evil Megatron shudders when he hears the whine of jet engines in the distance, for it may be Sky Shadow coming for him!

If I'm not mistaken, this is at least the second or third Decepticon Megatron's supposed to be terrified of, or at least wary. Let's see... Straxus/Darkmount and Thunderwing, too. Megatron's quite the worrier, it seems!

Sky Shadow is about as obscure a figure as you're going to get in Generations: while Darkmount was based on a US comic character and Thunderwing a US-released toy with a lot of fiction behind it, Sky Shadow is from Transformers: Victory, a Japanese-only release. That's a show never officially available in the United States in any form until a couple weeks ago, when Shout Factory released all the Japanese G1 shows in a DVD boxset. Interestingly, though the figure's been renamed as Sky Shadow- a name Hasbro's used more than once before -check your receipt if you bought him at Wal-Mart: it'll likely read BLCKSHAD like mine did.

As with the 1989 toy, Sky Shadow is made from the Thunderwing mode, with a few new parts which barely show up in this mode at all- you can make out his antennae/head-fin things sticking out under the air intakes of the jet, but that's it. The vehicle mode borrows a fair bit from the F-22 Raptor, but has entirely made-up wings and nose. The wings make me want to say he's the Ramjet version of the F-22, or maybe Dirge. The nose has its own reasons for being unusual, and we'll get to that in Accessories. There are three flip-out landing gears, one under the nose and two near the back of the jet. And there are 5mm sockets on the underside of each wing to store the missile launchers, which continue the Raptor's zigzag stealth motif. The entire figure, in fact, makes great use of that pattern. 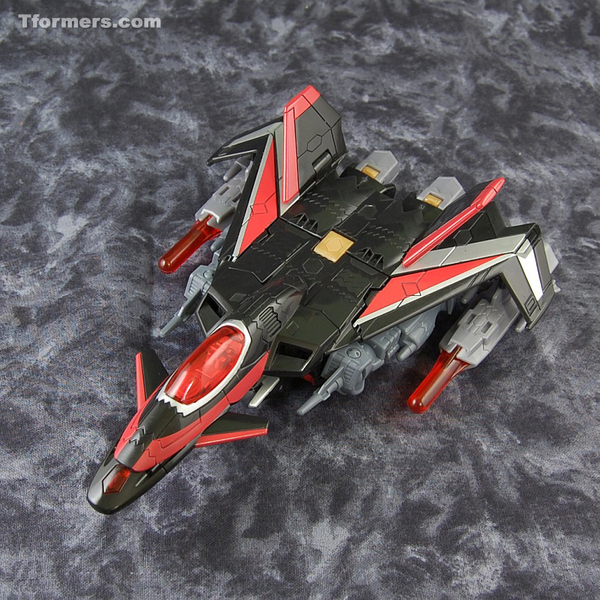 The color scheme is really nice- Hasbro really has the knack of differentiating two versions of a mold. He's black where Thunderwing was off-white, and has red and silver stripes instead of blue. The stripes are also in different patterns, which doesn't hurt either. Lastly, he has a vivid red cockpit bubble instead of Thunderwing's orange, which will have pleasant repercussions in Robot Mode. One interesting point: there are no Decepticon symbols visible in this mode at all. I go back and forth on the "disguise" issue, but I generally regard no symbols in Vehicle Mode as a nice touch.

If there's one flaw to the aesthetics of the jet, it's the typical Decepticon Jet Disease: there's an entire folded-up robot hanging off the bottom of the toy- and other than covering the head, very little effort is made to hide this fact.

So very simple. Fold down the facecover, open the torso, swing the hips down, and close. Open the feet, fold up the [i]entire jet[/i] onto Sky Shadow's back, swing out the wings, and done. If it's not the simplest transformation in all of Generations, it's very close. Warpath might actually be a touch simpler, but seeing as how he doesn't end up with a whole tank on his back it also feels a good bit more satisfying. There's still a couple nice touches here: for one, the shape of the nose-section of the jet is designed to completely cover its own hinge in jet mode. The other thing is that the new chestplate for Sky Shadow's Robot Mode has little cutouts on the sides to let his antennae through, which is a cute and entirely necessary touch.

The Robot Mode's based on the original figure's Pretender shell, which just as with Thunderwing is the form used in most of the fiction. Same as with Vehicle Mode, the designers have done a great job of distinguishing this figure from Thunderwing. The colors are still kind of a negative of Thunderwing's scheme, and all the layouts are different once again. Much more than on the jet, the placements are taken from the original toy and animation model. So: good job, Takara of 1989! 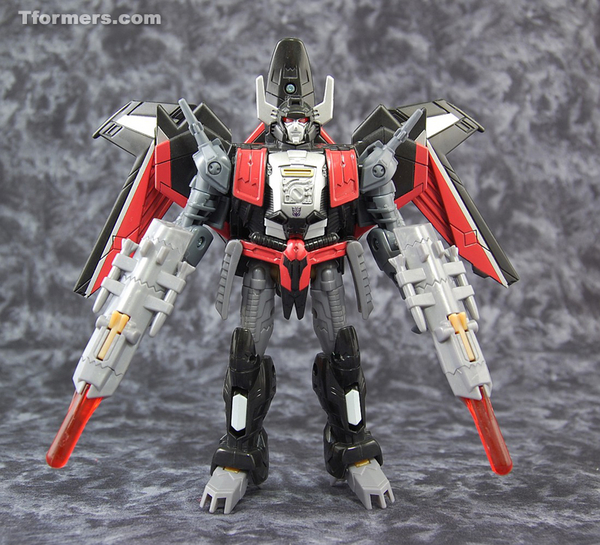 Likewise, the new head and torso parts are taken from the original toy and animation, which serve to make Sky Shadow look more mechanical than Thunderwing's Pretender shell did. The chestplate has some random mechanicalish detail that looks like nothing so much as a Stormtrooper's backpack, and a tiny, tiny Decepticon emblem beneath the big square part. The head is totally the animation version, though: the toy had much more conservative antennae. The face itself is also more animation-inspired though more detailed, with subtle vents across his cheeks. The lines in his face make him look just a bit older than the animation, but that's not a big deal. That red plastic used for the cockpit bubble is put to great use for his light-piping: Sky Shadow has the most vivid optics on a Transformer since probably Beast Machines Tankor.

The upside-down jet wings fold out to become a pair of M-shaped wings on the back of the figure, which do at least help diffuse the G1 Aerialbot impression he'd otherwise be doing. Neither Black Shadow nor Thunderwing had these wings originally, but they don't look bad on either figure, so I'm not minding. One visual cue that doesn't seem to come from either old version of Sky Shadow are the white hexagons on his shins. These are the covers for the jet's landing gears, and I just really like how that looks.

Articulation is as simple as the transformation, but mostly effective. Technically the neck seems to have a ball-joint, but it rarely gets any kind of tilt. The guns on the shoulder armor trip things up there considerably: they swivel, so you can raise the arms out to the sides, but to effectively swing the arms forward you either have to stress them to a degree I'm not comfortable with, or unfold the jet bits on the back. Neither one's a great solution, but at least there's something. The elbows do about as well as a single joint can, folding to slightly tighter than a 90-degree angle. The wrists are swivels. The hands still have Thunderwing's claws, but since there's no reason you'd want to stuff a Matrix into Sky Shadow's hands, the thumbs should be safe from stress. The hips are ball-jointed, and have a fair range both forward and to the sides- the hinged hip armor gets out of the way nicely, but the cables molded into the legs pry open the torso when moved too far forward. It's not super-noticeable, but it can be a bother. The thigh swivels do help with posing considerably, especially if you want to work around the torso issue to a certain degree. The knees are also single hinge joints and do about as well as the elbow. The feet are odd, based as they are on the Raptor's exhaust flaps. But even more odd is that they're pretty versatile in terms of holding Sky Shadow up. They have a bit of tilt- technically they're on balljoints, but the shape of the ankles don't really allow for anything else.

When you pull down the landing gear, you can detach a small drone from the nose of the plane- a nod to the original toys' ability to combine its robot and Pretender Vehicle Modes into one big jet. There's some really nice sculpted detail here, continuing the zigzag stealth pattern from the rest of the jet. Also, a pair of very small guns and a red sensor panel. Sadly, the red plastic which is really bright everywhere else doesn't stand out particularly well here. Which is sad, because it cuts down on the drone's visual interest a bit. Also, the nose of the jet looks markedly incomplete without it, so don't lose it! 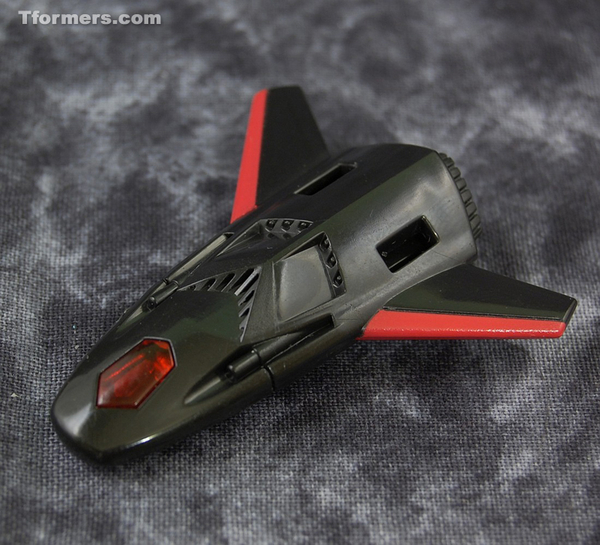 It wouldn't be Hasbro without springloaded missile launchers- but these are some of the nicer ones you'll see. In addition to fitting in nicely with the styling of the jet, each of the two launchers has a pair of non-firing missiles molded on the sides which also function as Miyake Joints, the C-joints introduced in the later Revenge of the Fallen toys. On top of that- literally -they stack into a single super-gun thing. Though I kind of like to keep Sky Shadow with one in each hand; it looks neat.

One thing I'm particularly happy about here is that the plastic tolerances fix one of my major problems with Thunderwing: in order to fit into the wings properly, the 5mm pegs are very shallow here, and it was easy to knock the guns off of the wings or out of Thunderwing's hands. Sky Shadow seemingly doesn't have this problem- nice!

It's a tough one to rate, because a certain amount of the fondness I have for Generations Thunderwing is because he's Thunderwing. Sky Shadow isn't a character I know at all, but he's also a striking recolor/remold of a decent existing mold. However, he does a few little things better than the first version of the mold, and I think that's enough for him to share the same rating of Very Good on the Figurereviews.com scale. -RAC 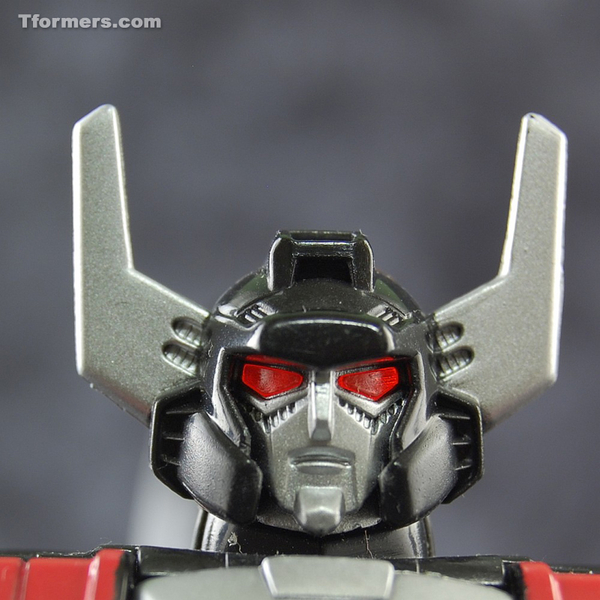