A lot of people seem to prefer the Henkei and United lines to their US Classics/Universe/Generations counterparts. I am not one of those people, not before the Yen-Dollar exchange rate went pear-shaped and definitely not now. Not a big fan of extraneous chrome, even on those toys where I thought the Takara color scheme was superior to the Hasbro colors. But every rule has its exceptions, and in my case one of those was Henkei! Henkei! Dinobot. The US toy was given a more traditionally Decepticonesque color scheme to cement its place in the assortment as the Predacon foil to Universe Cheetor. Meanwhile, the Henkei version is gloriously show accurate in its coloring and judicious in its use of chrome.

But, is it any good?

It's a pretty accurate portrayal of the not-quite-authentic type of raptor Dinobot was modeled as in the series. The face is particularly good- the brow ridges are spot-on with only the snout being slightly less flared than the CGI model. The eyes have sharply-molded eyeslits that aren't colored in completely on either my or ExVee's example of Henkei Dinobot, which leads me to believe that was intentional. You have to look really closely to see the difference though. The dino coloration is dead-on, being primarily brown with tan stripes. The underbelly and surrounding areas should be that shade of tan too, but there's a lot of robot parts in that area that occupy that space instead. 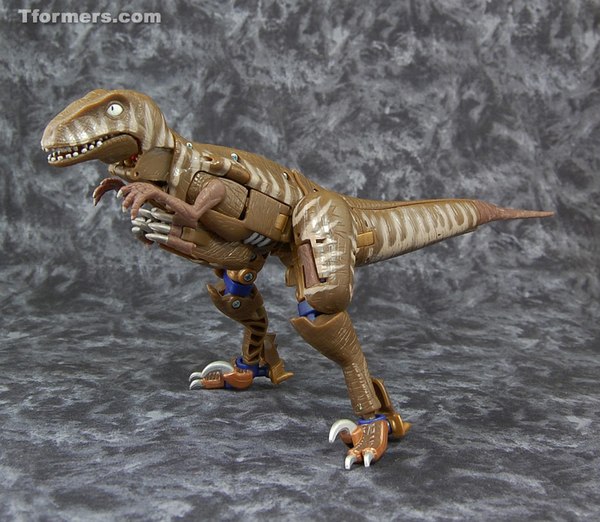 Those robot parts are unfortunately pretty obvious from most angles but top-down. The folded-up claws of the Robot Mode hands are prominent on the chest, with the silver paint used looking like nothing so much as an exposed metallic ribcage. Gruesome! It also makes the undercarriage unduly thick, which accentuates the (otherwise accurate) shortness of his raptor arms. The dino-feet are a compromise between the two modes, with Robot Mode copper on the sides and the chocolate brown of Beast Mode on top. The silver returns for the claws on the feet, and I think I get where they were going with that. The color in the animation always struck me as slightly closer to a bone-white color, which is what the Universe version used. But it also had that glossy, metallic shininess that most of the Beast Wars CGI had- it was great for its time, and the design work itself is still strong, but certain things about the animation's pretty dated now, and that's a big one. So I understand the rationale for the silver, even if it's not the choice I might have made. Meanwhile, there's no denying that the Robot Mode foot is not strongly disguised as a raptor's heel spur.

Articulation in this mode is pretty limited. The head and tail don't move, though the jaw is hinged. I rather wish there was a tongue molded inside the mouth- it looks a bit off without one. The arms swivel at the shoulder. The legs are the best off, though still limited. The hips have good range being ball joints as they are, but the knees are extremely limited, barely bending at all. The ankles aren't great by ball-joint standards, but they support a fairly wide set of stances. Not a super-articulated dino by any means.

The figure goes through some truly fascinating contortions to emulate the onscreen Dinobot as much as possible. The dino-thighs swing down to lock around the calves, emulating Dinobot's ornate lower legs as well as possible. The two halves of the robot pelvis lock together, and the dino-head folds down into the torso as it should. Well, mostly as it should; the flap that covers Dinobot's robot head is springloaded, and unless you're brave enough to cut the spring (not me!) you have to poke something narrow into the chest, like the hilt of his sword or the raptor tail, to get it to sit as deep into the chest as you'd think it should. The other issue is that the raptor arms are mounted around the Robot arm joints on fragile little rings- one of mine has split but is staying on still. Worrisome! 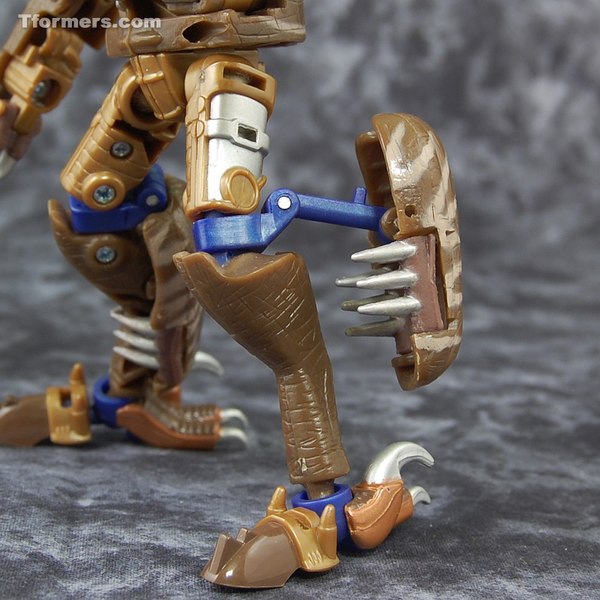 (Incidentally, the instructions say the panels with the dino-arms should sit on top of the Robot shoulders. Ignore that and put them behind.)

This is as close to Dinobot's onscreen appearance as you're probably going to get. The proportions are somewhat different because you can't stretch and warp parts the way the animators could, so he's a trifle taller and more slender. And also his boots aren't as fancy, as I mentioned, but it's as good a try as I can imagine on this body. But the overall look is good, and the head is perfect. It is undeniably, completely Dinobot, and the color of the Henkei version is the best way to see that for yourself. The bronze of the helmet and metallic blue of the face are dead-on, and the paint on the front half of the helmet is much more elaborate and accurate than Hasbro's as well. (The back half being clear-red light piping, of course.) The body lacks some paint that could've helped the overall appearance though, most notably paint for the sculpted-in shoulder armor. (The, um, rigid grill structure is also unpainted, but somehow I'm okay with that.) I have a hunch it's that pesky unpaintable plastic, though. Likewise his flanks could've used some blue to match his animation model, but I don't think there's any way you could've done that without it sticking out like a big blue thumb in Beast Mode. 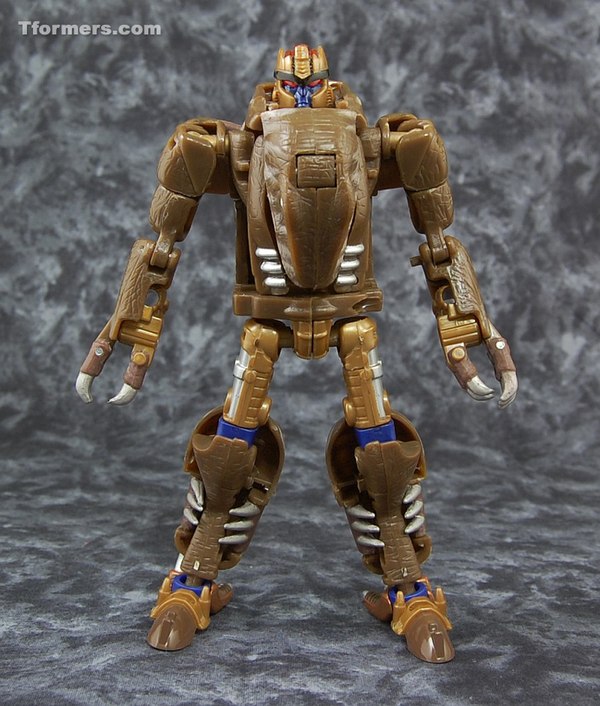 There's a couple neat features here too: one is that there's a panel on Dinobot's chest to let you select between Predacon or Maximal faction symbols as frequently as Dinobot himself did. There's also a blank side to match the animation (and not have a mark on his forehead in Beast Mode). Likewise, you get to pick between animation-accurate claw-hands -which are the default -or more robotic broze hands which leave the upper claws exposed, looking a type of punching weapon. It's a nice touch on a toy filled with nice touches.

The sacrifice for all this? That would be articulation, sadly. The neck is a swivel, and the shape of the collar makes a 360-degree turn difficult, but not quite impossible. I don't want to risk scraping that lovely paint, though. You can see a pin going through the head intended to allow for tilt, but again, that collar thinks otherwise. The arms fare a lot better, since they have transformation considerations helping them out. The ball-joint shoulders swing out perpendicular to the body, a nice solid range. Those plates that have the raptor arms limit the swivel to merely what an actual human could accomplish rather than a full, unobstructed 360-degree swivel. Bah! The elbows are offset to allow the arms to double over for transformation, so the forearms can easily fold flat against the upper arm on a single hinge. Very nice- though the hinges look a bit wonky in use. Minor issue to me, might be more severe to you. The claws are hinged, and they get a pretty good grip around Dinobot's sword, but not the big bulky tail-weapon thing. No waist, of course, due to the split-pelvis construction. The hips are great in theory- they can swing straight ahead, straight back, or straight out to the sides. But in practice, they're really loose. The weight of the missile launcher is more than enough to knock Dinobot over nine times out of ten. The knees weren't great before there were dino-thighs and their hinges settled in the small of the knee, and now they're worse- that can't be any more than a 15-degree range. The ankles have a pretty good range, enough to manage some interesting poses despite the lack of decent knees. It's not the most restricted figure ever, but I have had far better in Universe/Henkei/Etc.

In place of the rotate blade of the original toy, Hasbro goes with its default accessory, the missile launcher. But to preserve the original figure's setup, where you peeled open Dinobot's tail and removed what looked very much like a string of tailbones to use as a sword, the missile is sword-shaped. Kind of- it's too short to make an effective sword, with the hilt falling about halfway up the missile, and the tip is distinctly not-pointy. There's a variety of ways to have Dinobot hold the sword, none of which are quite satisfactory: first, the notches in the missile shaft block him from holding the sword close to the hilt. You're supposed to be able to use those notches to lock the sword into his claw-hand, but that doesn't hold very securely. Your best bet is to lace the soft-plastic fingers together up near the handguard, which is the most secure way to hold the weapon that doesn't look rather stupid. 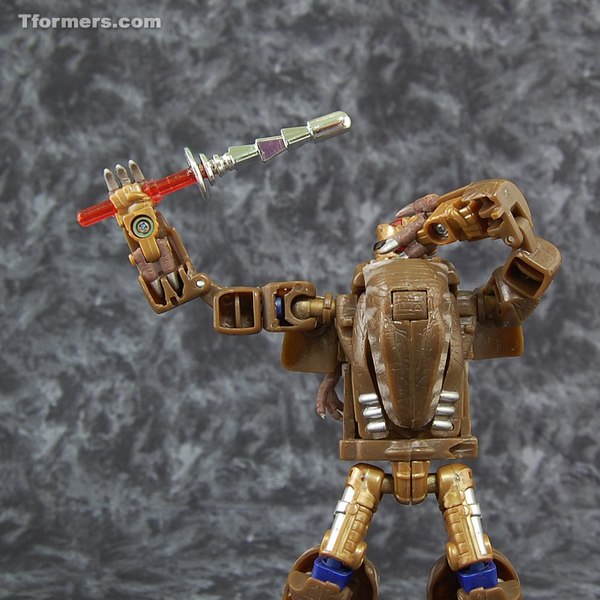 The wide guard means the sword has horrible aerodynamics as a missile. Also, being the back half of a dinosaur, the launcher unit is really heavy, as I mentioned above. His weak hips really can't use it. It can be stowed on the back though, courtesy of the trigger for the missile launcher being hook-shaped and corresponding to a notch in the figure's collar. Not a wonderful pair of accessories, but I do appreciate the attempt to give Dinobot accessories that match the look of what he used in the show.

And in terms of appearance, Takara again goes the extra mile: where the Universe version of the sword was cast in the same orange as that Dinobot's light-piping and completely unpainted, this one gets the entirely animation accurate dose of Henkei chrome. Every Henkei's gotta have chrome apparently, and not only would I prefer it to be on a weapon where it's more easily ignored, but Dinobot's sword is supposed to be shiny silver! It's an inspired deco choice on a figure that already has a good number of those. Likewise the inside of the tail is lined in red as it was on the original toy, which also looks really good.

It's not a perfect toy. Neither was the original Dinobot, which had the disadvantage of not looking terribly much like the character model (it doesn't even have a mouth!) but had better play value. So then, this figure's strength is not in articulation or gimmickry, but completely in doing a good job of looking like Mainframe's CGI model of the character. That being the case you want the Henkei version if you're going to buy this mold at all. 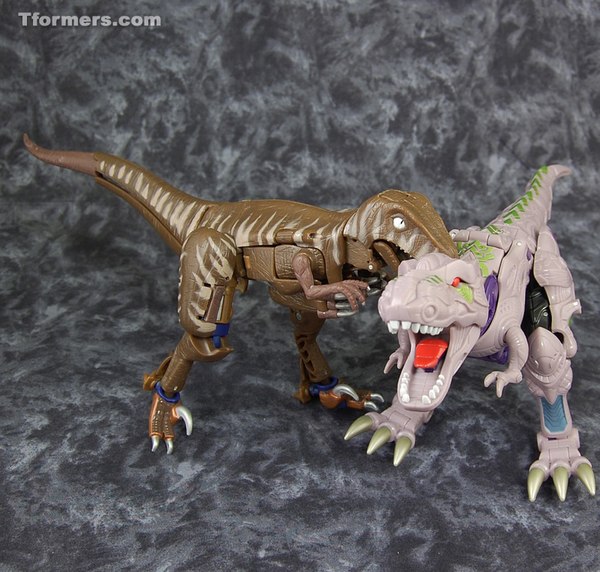 I find it very hard to judge a figure like this because I'm normally geared towards articulation, and this figure isn't very good at that. But it looks great, doubly so if you owned the Universe version first. There are two Dinobot molds available in various decos, and this is the one of all of those that looks the most like the character. It's worth a Good on the Figurereviews.com rating scale.