Release Data: Released in the US in February of 2012 at a suggested retail price of US$3.99

Bot Shots is Hasbro's move to create a collectible battling game in a style similar to Bakugan. But for the Bot Shots game, you need absolutely nothing except a pair of Bot Shots figures, and maybe not even that when the online game launches in March. All Bot Shots follow one model for transformation, and so the robot forms are generally very similar regardless of the individual character's vehicle mode. Between that and the automatic transformation gimmick, comparisons to Bakugan are going to be unavoidable, and Hasbro may even be counting on that to develop initial interest in the line.

The game itself is very simple as well. Each character has a spinning block in the chest which can show one of three faces: Blaster, Sword, and Fist, each with an accompanying power stat. By the rules of the game, Blaster beats Fist, Fist beats Sword, and Sword beats Blaster. ...which to me sounds exactly backward, but maybe the developers have been watching a lot of anime where of course swords are the best possible weapons outside of bare hands. So before a match, you select your attack mode, and crunch your Bot Shot to vehicle form. Then the players send their figures careening towards each other, where upon impact they spring up to robot mode, and whoever shows the winning attack wins. Or in the case of both showing the same attack, whoever has the higher power level is the winner. And if your Bot Shot fails to transform, you lose by default. It's all very self contained and easy to follow, with no card game or anything else to be collected, any Bot Shot has the potential to win over any other Bot Shot, giving all players a level field. Plus it ties in to natural child play patterns of hitting toys together as hard as possible, which I appreciate a lot! 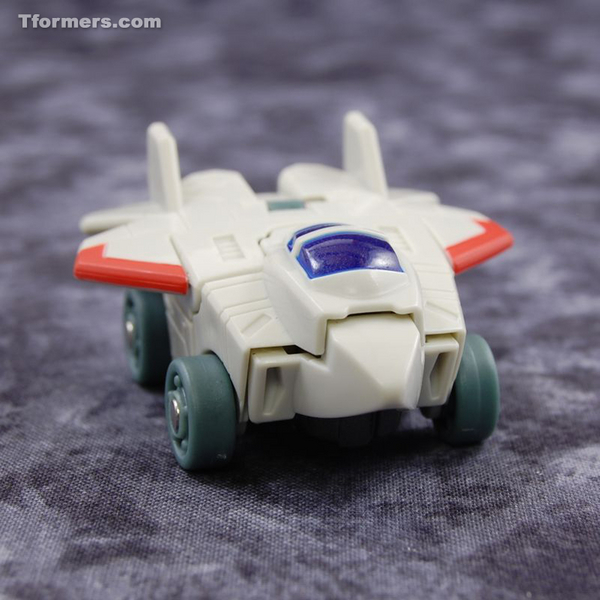 Each character's attack powers are listed on the back of the packaging. So in Starscream's case, he has Fist Power of 640, Blaster Power of 710, and Sword Power of 290, clearly proving Armada Starscream was not a consideration in designing this character.

Starscream's vehicle mode is based on an F-22, but incredibly super-deformed. That along with the four big wheels give it an enjoyably absurd appearance that really helped draw me to this figure in particular. And yet, even despite being cartoonishly proportioned, there is no loss of molded detail to the vehicle mode. Panel lines are present all over the vehicle surface, along with vents, intakes, engine detailing, and even zigzag panel lines that help deflect radar on real aircraft. It's quite amazing how detailed such an unrealistic vehicle form was made, but I certainly can't complain of the effort or the outcome, as it makes one sharp little plane! Though the vehicle form follows Movie Starscream, the colors are very much G1-derived, so most of the vehicle mode is unpainted light grey plastic. But the red stripes on the leading edges of the wings very much tie this back to G1, while the dark blue canopy seeks a little more realism than the amber tint mostly associated with Starscream. Starscream rolls smoothly and easily on his big wheels. I want to call them big and goofy, but they're only goofy because it's a plane. On other vehicles in these proportions they'd look relatively normal. Starscream looks like someone's project car dressed up to look like a fighter jet. But again, the absurdity of it was a real draw, so don't take it as a complaint. Though Starscream will cruise along very well with a push, the wheels are not so free that the toy will roll of its own accord down a mild incline, as my sadly slanted desk helped me prove.

Transforming Bot Shots is easily my favorite function of the toy. Each one has a trigger on the front end, on cars it'll be hidden as a bumper, but for Starscream it's the nose of the jet. To make sure the game works reliably, the trigger is very sensitive. Just the force you would apply to it by gently picking the toy up can be enough to launch transformation if you grab it from the front. When activated correctly by running in to another Bot Shot, or any other object, Starscream pops up on his feet, the nose of the jet folds back, and the arms open to the sides all at once. It's great fun to watch, and it's not hard to just press the trigger while the toy is stationary and pull your hand clear to let the toy spring in to robot mode where it sits.

Returning the vehicle mode is more manual. The brief instruction sheet shows it as a three-step process, but I find it's not even that hard. Just push the feet and hold them up while folding the nose back over the head. As long as you're not pressing the trigger by accident, the arms should fold in by themselves and everything lock together once the nose is back down in vehicle mode position. The only problem I've had is the feet don't always want to lock up on the first try, but it would only take another firm press or two before they catch and stay closed. Overall, it's hard for me to describe how satisfying the feeling of popping this between modes really is. Bot Shots Starscream has become a favorite to just idly mess with at my desk just because I don't have to focus any attention on the toy like a normal Transformer.

The robot mode is more utilitarian to the game, and aside from specific detailing is effectively identical between figures. Articulation is a non-factor with these toys, unless you count flapping the arms a bit on their springs. That is of course not the point of these, as they're just game pieces to represent a character or "character idea" in cases like Starscream where it obviously draws from more than one continuity for the design. As one of the few clearly differentiating elements of the robot, and in keeping with SD styling, the head is exaggeratedly large. The design is based very strongly on G1 Starscream, though the smirk and extent of chin under it calls back a bit to Animated. As often happens with G1-style Starscream toys, the head is cast in a lighter color and then the helmet is painted dark. Sadly this does leave some edges uncolored, and is really where the sparing paint applications seem weakest. 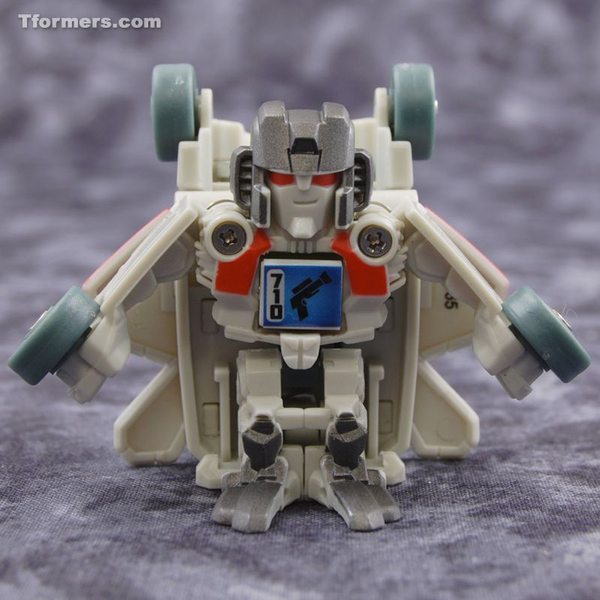 The chest is dominated by the Attack Power spinner, and Starscream's "default" seems intended to be Blaster. By virtue of Blaster's blue background that also serves to set the color balance of the chest to appear like the cockpit is present. The arms are sculpted detail under the side panels of the vehicle form, ending in relatively huge fists. No wonder his Fist Power is 640! Meanwhile, the "legs" only even appear plural thanks to having two feet. These serve their only function when they stand the toy up out of vehicle mode, using the strongest coil spring on the figure. Outside of that, their resemblance to legs is only superficial. The obvious toes and greeblie detailing on the sides makes those look more Movie-inspired than the head, but it's hard to tell. The package art, simplistic as it is, seems to take the course of the whole thing being more G1-hewn. But then again, it also implies the arms can move, so that's probably not the best example.

Even if you're not interested in playing the game with someone, I have to say Bot Shots are neat enough that you ought to at least get one. The one-click transformation that you can choose to either trigger by hand or by sending the toy crashing at some larger object is more fun than it seems like it should be. The design makes them really nice desk toys, especially for just the few dollars each one costs. As long as you don't go in understanding it's just a transforming game-piece and not intended to be an action figure, I can't see how anyone could be unsatisfied with these. Starscream in particular rates a Very Good on the Figurereviews.com Rating Scale, and I'm really happy with the overall design.

I need more of these.