After a year of the series broadcasting on The Hub cable network, and on the eve of a 2nd season debuting, consumers will finally be able to start picking up action figures from the Transformers: Prime series. The First Edition figures were a bit of a holy grail to find, but Toys R Us has being stocking the figures sporadically. Walmart and Target are also resetting aisles to make room. Tformers.com begins our reviews of Prime figures with the Autobot leader Optimus Prime in his Voyager class Powerizer figure.

It took long years of patient training, battlefield exprience, and constant modifications for Optimus Prime to achieve the raw might with which he combats Megatron and the Decepticons. Now, he is a perfect warrior and a courageous leader, against whom evil can never stand. 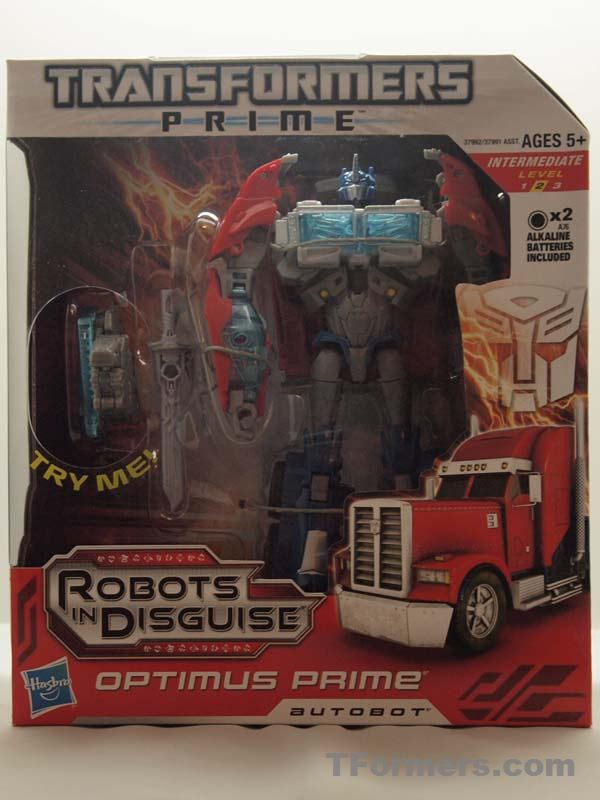 Packaging will be very familiar in Prime. The box and card styles are the same as in recent other series. There are some differences with the graphics. The Robots In Disguise banner is flanked with Cybertronian glyphs, a classy touch. Another handy addition is the series and release number of the figure so you can keep track of when figures were released. Voyager class figures also get some nifty artwork on the right side panel. 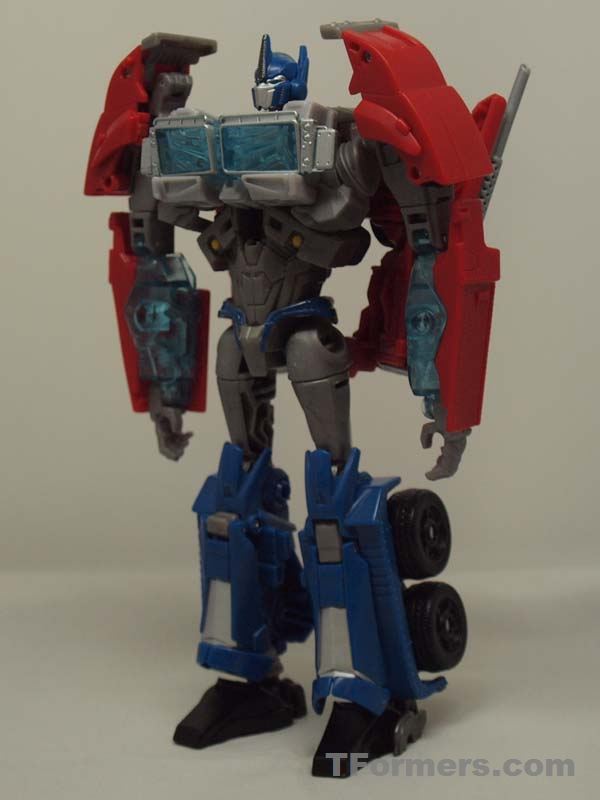 Optimus is pretty well represented in robot mode, if not a tinge drab. He has the trademark dark blue lower legs and the bright red arms, but the section from the thighs to the abdomen PVC gray mostly. Only some yellow in the abdomen and blue in the waist break things up. The inner forearms and chest are done in translucent blue. There are peg-in points on both forearms for weaponry. The head sculpt looks more at home on a Bayverse figure than on a Prime figure. They didn't seem to capture the essence just right. Unlike some previous voyager class Optimus figures, the faceplate is not retractable. 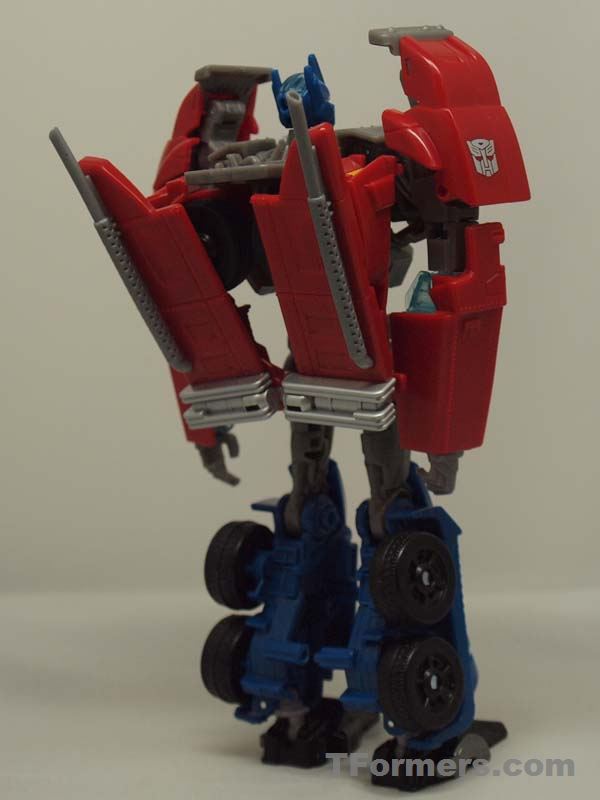 Optimus comes with both a combat sword and a battle blaster. Unlike the anime, you can't retract the hand to have the sword stick out from the forearm. However, proper placement can give you the look. The battle blaster borrows an element from Bayverse's Mech-Tech, in which pulling back on a trigger will fold out the weapon. Two A76 batteries then power a small red LED light in the translucent barrel of the blaster. Two problems with this feature. One, the weapon cannot lock in place, although it is easy to hold in place since they located the trigger close to the upper arm. Secondly, due to LED's inherent properties, you don't get a good reflectance of light. The 'glow' mostly stays around where the LED is housed. 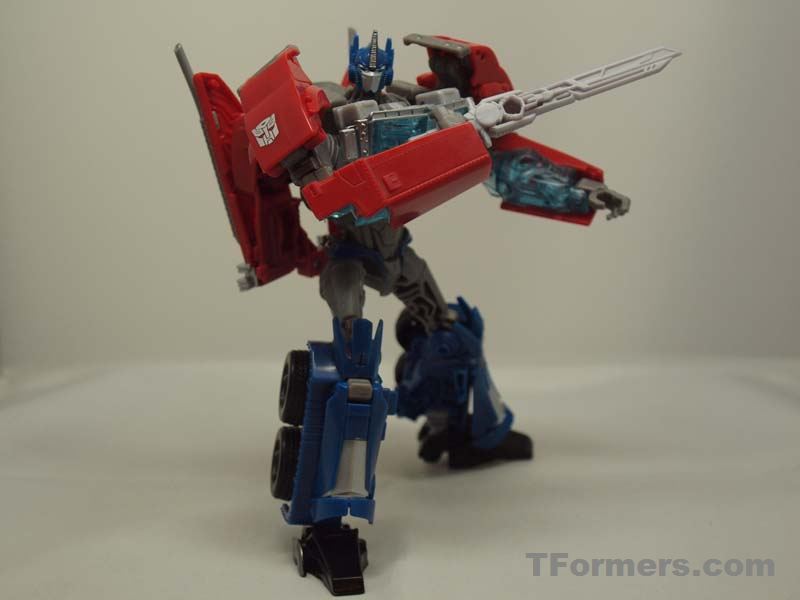 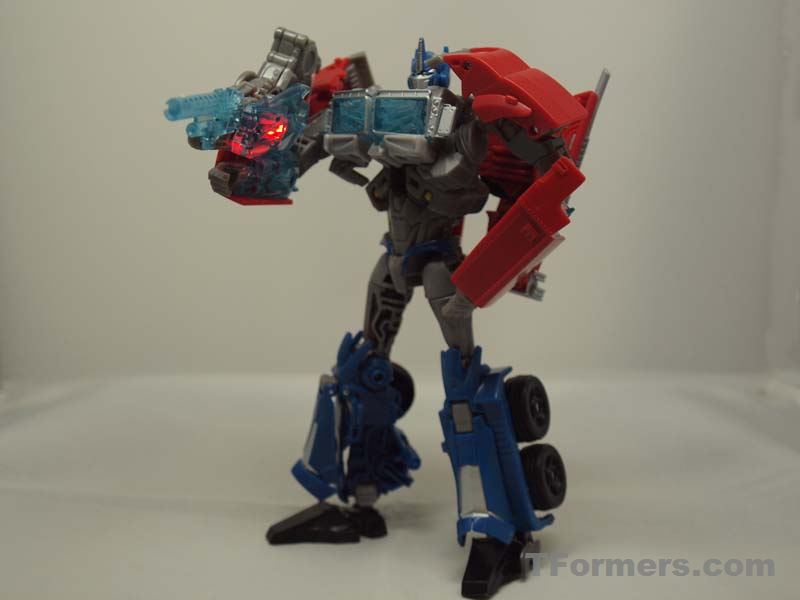 Except for lack of waist articulation, joints are set up pretty well.

Robot Mode Summary:A little more color and it would be fab.

Transformation is quite involved for a Voyager class figure, which is quite welcome. The arms have a slight learning curve when transforming them into the hood line and air dam sections. Once you give it a couple of goes, it becomes pretty easy. Once you have it in alt mode, you will need to 'tighten up' the gaps in the body, including the engine compartment and sleeper section. 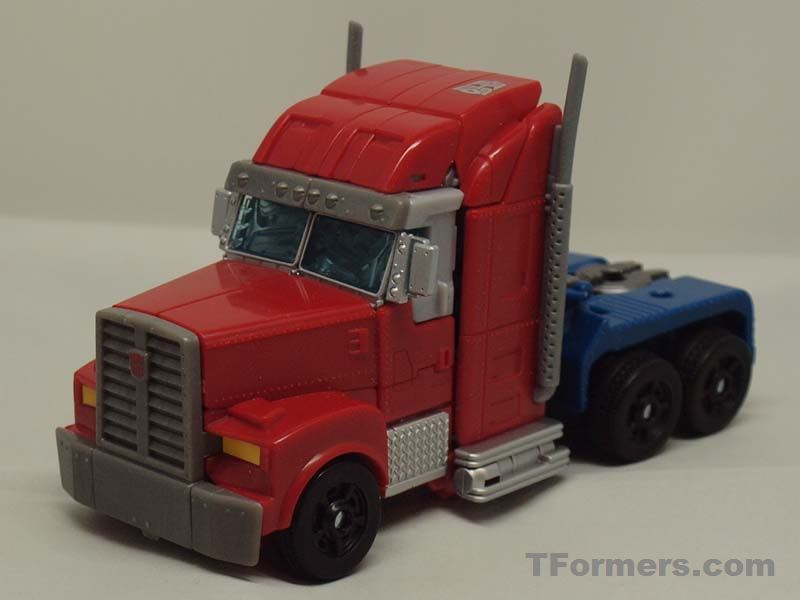 Optimus' alt mode follows that of the Bayverse in being an Over-The-Road tractor semi. Red is featured on the cab and engine section, while blue is on the rear. The exhaust stacks are soft rubber, but the rest of the truck is PVC, including the mirrors. There is a fith wheel with a peg mount, which may offer hope for a trailer later on. However, that might just be a pipe dream. There are also peg mounts on either side of the fifth wheel. 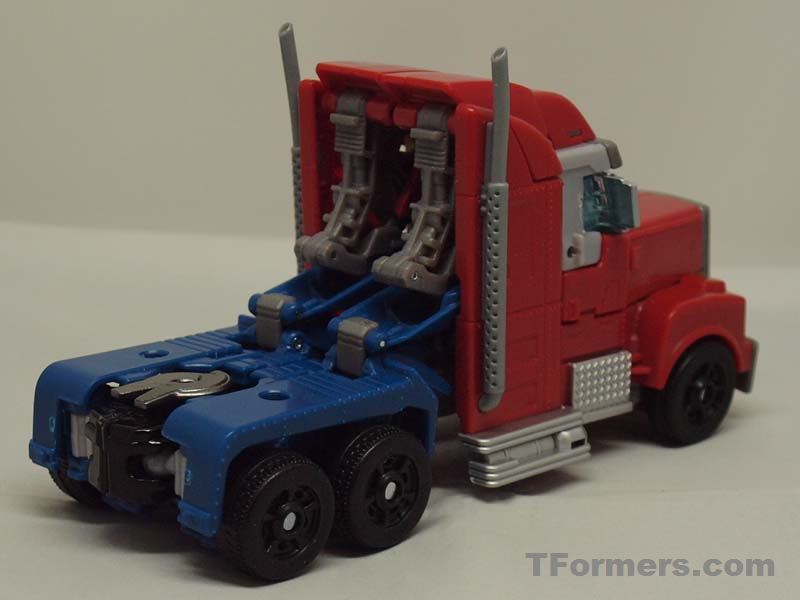 Again, the fault is with the details, or lack thereof. The door windows are of the same unpainted PVC as the windshield frames. The diamond plating on the storage compartments is a nice touch, but there's just too much undetailed PVC laying around that takes away from the look. Also, the section between the cab and the rear is gapped and somewhat cluttered looking. On the bright side, you can attach the sword and blaster to the pegs in the rear for storage. Alternately, you can retract the air dam and peg the blaster in place. As a plus, you can use the dam to hold the blaster in it's extended mode.

This is where things come apart. Hasbro has tried for several years to increase the value of Transformer figures but it's never stuck. Price points of $24.99 for Voyagers have always slunk back to $19.99. It is inevitable that the price would have to increase. Resins and fuel pricing have risen considerably in the lsat few years. However, Hasbro has set the bar very high here. Normally, adjusting for inflation means either making a figure smaller or raising the price point. In this case, Hasbro has done BOTH. Optimus feels and looks smaller than a traditional Voyager. He also has a price point of $27.99. That's almost a 30% increase. Mind you, Toys R Us seems to be the first out of the gate and they are traditionally 10% higher than the likes of Target or Walmart. However, even accounting for that, I don't expect Optimus to be found for any lower than $24.99.

That being said, I think Hasbro is over-reaching. To make a figure smaller AND increase the price point by as much as they have, especially in a stagnant economy, they risk slow sales. I would be happy with this being a $19.99 figure even with it's smaller than average size, but to add another $8 to the price makes it a tougher pill to swallow. It is well engineered, and it's build quality is very sturdy. Time will tell if the added price will stick.

Though I never had the opportunity to find the First Edition OPtimus Prime figure, I generally do like Powerizer Optimus Prime. He's sturdy, looks overall great in both modes and has some good playability. However, the high price point and lack of painted details takes away from that a bit. Sure, a good detailer can bring out the best of this figure, but with such a high price increase they shouldn't have to. If the Prime series is to succeed, they need to either rethink the price point or be more generous with the paint apps.