Though killed off early in the anime series, Cliffjumper has remained popular. Traditionally, Cliffjumper has been an 'also-ran', sharing molds with Bumblebee. This time around, he gets his own look. Perhaps that's why people are so excited about his character this time around. This review will shed light on the Autobot warrior.

Few Autobots are as fierce as Cliffjumper. The Decepticons long ago learned to fear the loudmouthed warrior for the incredible skill with which he wields his battle hammer. 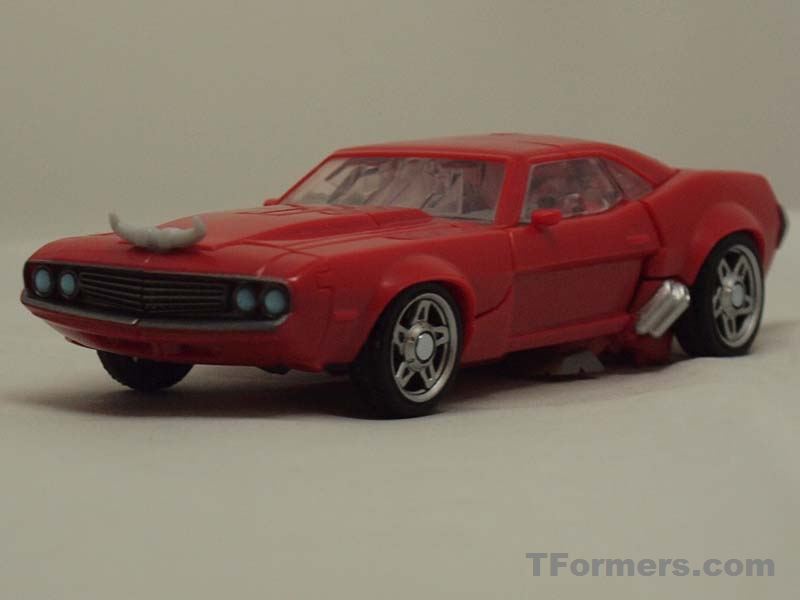 Cliffjumper's alt mode is faithfully portrayed as a 1970s era muscle car, mostly resembling a Dodge. The paint is all red, with clear windows and the familiar longhorn hood ornament. He also has twin exhaust pipes jutting out the sides just behind the doors. Even with the silly soft rubber hood ornament, this has to be one of the best muscle car depictions since Cybertron Wheeljack. 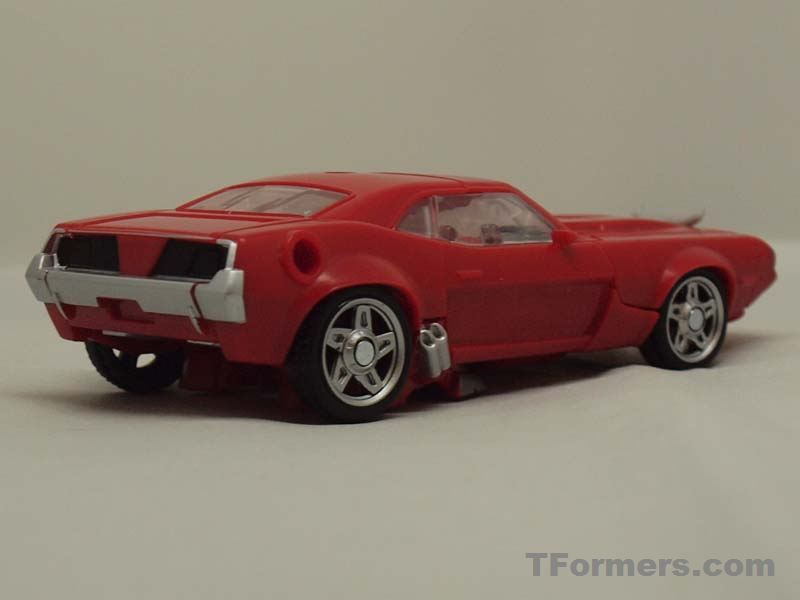 Cliffjumper's Battle Hammer can be used as a cannon in one of two ways. You can either port it to the roof or to the right side quarterpanel. Strangely, there is no port for the left side. There are some minor details left unpainted, but versus Optimus and some other Prime figures the detailing is pretty well thourough here, including the grillework.

Prime has kicked up Deluxe class transformation complexity a notch, and that's not a bad thing. Although overly simple, there is a bit of work to be done to get him between modes. Auto-Morph technology makes it's way here. As you pull down the shoulders, the roof splits slightly and Cliffjumper's head pops out. 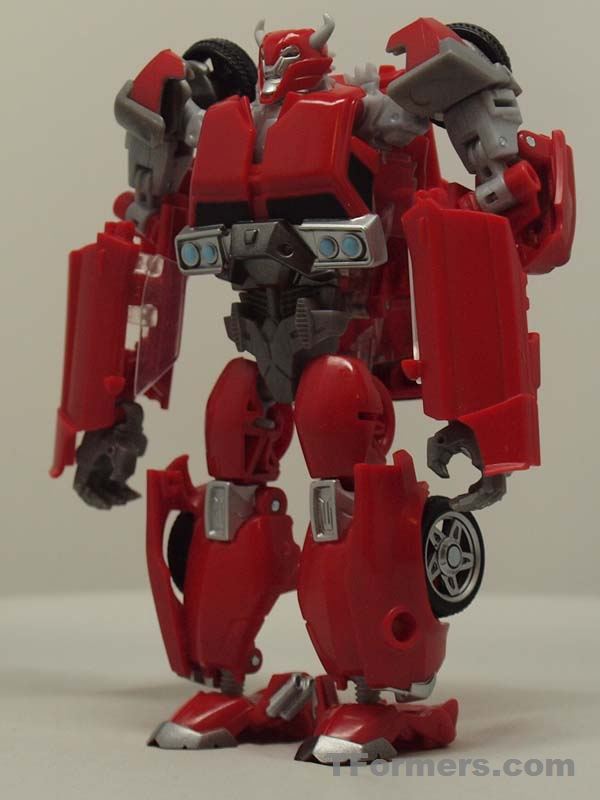 The excitement I had for Cliffjumper wanes slightly as I see him in robot mode. The mostly red paint job remains, but is now flanked by more silver accents including the knees, abdomen and shoulders. There is a lot of false details present, including the abdomen/grille and the molded 'wheels' on the back of his thighs. The arms suffer from Bayverse Jazz Syndrome, where it's just the doors and fenders folded together. At least he has proper hands. The head sculpt is good but the expression is a bit vapid. 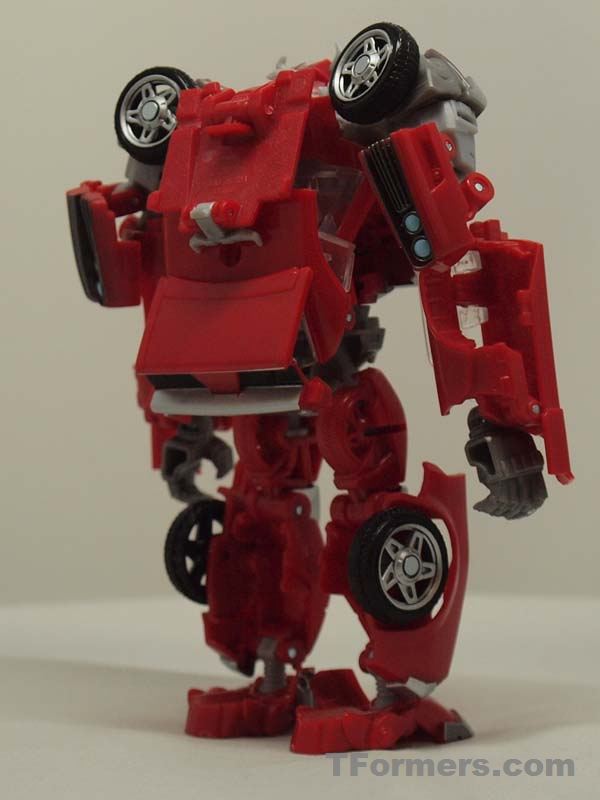 As with the alt mode, the Battle Hammer can be used as a cannon. It will fit in either hand, but make sure you push it close to the palm to keep it secure. The Battle Hammer has to be fully lodged in his hand to keep it from being loose as well. Poseability is pretty solid (See below) so you can get some good display quality from him. The only other real downside of this figure is the clunky back where all the alt mode parts just kind of fold into one another. 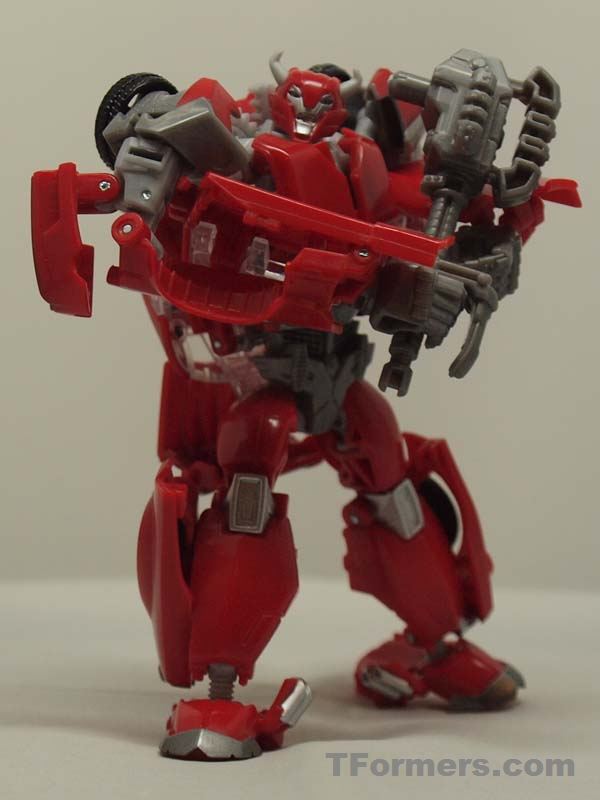 
The set up is virtually flawless. when posing the arms, though, the panels might try to come apart. It will take minor adjustments to keep the panels in line.

There's a lot of little parts that can easily be broken off, including the door windows, hood and trunk assembly. All are pin hinged and might snap off if left partially transformed and abused. Then there's the price factor. Toys R Us retails this figure for $14.99, a 50% uptick from what other stores have sold Deluxe Class figures for in the past. Though I hope I'm wrong, I don't see Prime Deluxes going below $12.99. That might curb enthusiasm for the series, which is already a year late out of the gate. On the plus side, Cliffjumper's detailing is so far superior to other Prime figures I've seen.

Cliffjumper has a lot going for him. He has a stylish alt mode and a mostly tough looking robot mode. The arms kill it a bit for me, as does the back kibble. Aside from that, Cliffjumper looks to be a standout in the series thus far.