Though Wheeljack has gotten more prominance lately via the Dark of the Moon movie and the Generations series, neither have captured his original G1 essence to the full. The Generations figure was a repaint of Tracks with a new head. Not exotic enough. And who ever heard of a blue Wheeljack? The Prime series looks to bring the look Wheeljack fans have been wanting. But does it have more than just looks going for it?

As a former member of the Wreckers, Wheeljack is more than capable of taking care of himself. but he's glad to know that at least one of his old friends - Bulkhead - is still around, bringing the rain to the Decepticons. 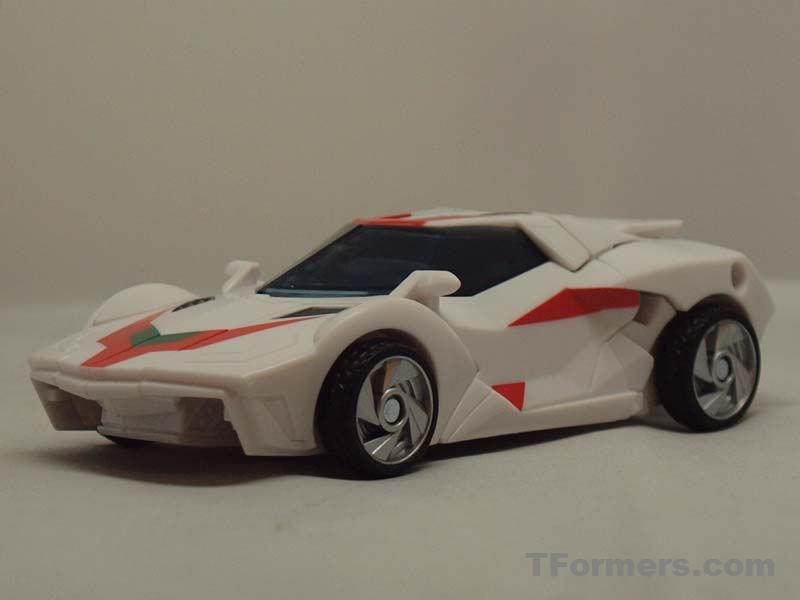 It's nice to see Wheeljack (somewhat) return to his roots, posing as an exotic sports car. While not exactly a Lancia, it's a very striking design. The white paint job with green and red accents are in place. Curiously enough, the doors seem to be missing part of the stripe. Or, at least, it gives that look. Not everyone will be won by the design. The front and rear lower effects are nothing more than gaping holes. Unless you're planning on constantly looking straight on to the grille or rear end, it's not much to worry about. 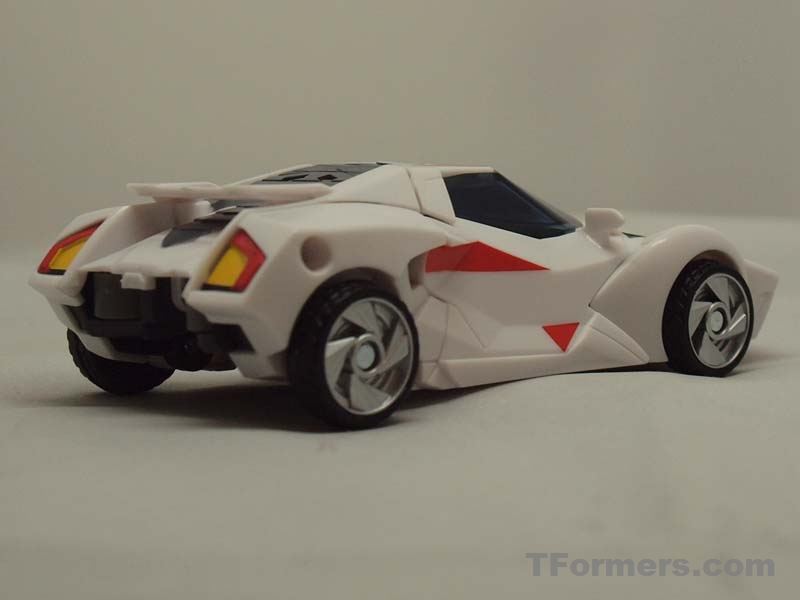 Most of the details are brought out in the paint apps, including tail lights and hood vents. Even the wheels are spiffier than one might be used to, with a sort of pinwheel design. Both of Wheeljack's swords clamp on just below the hood to jut out ahead, in case you desire Decepticon sushi. If the effect is a bit too goofy for you, there is the option of storing the swords under the chassis where they don't intrude. If you want to really go on a limb, you can also peg the swords into the quarterpanels.

There's a lot going on with Wheeljack's transformation. From the legs to the arms, it's a bit of work. Not rough work, mind you. The legs require several steps to get in place. Don't forget to pull out the knee armor. The arms aren't as involved. 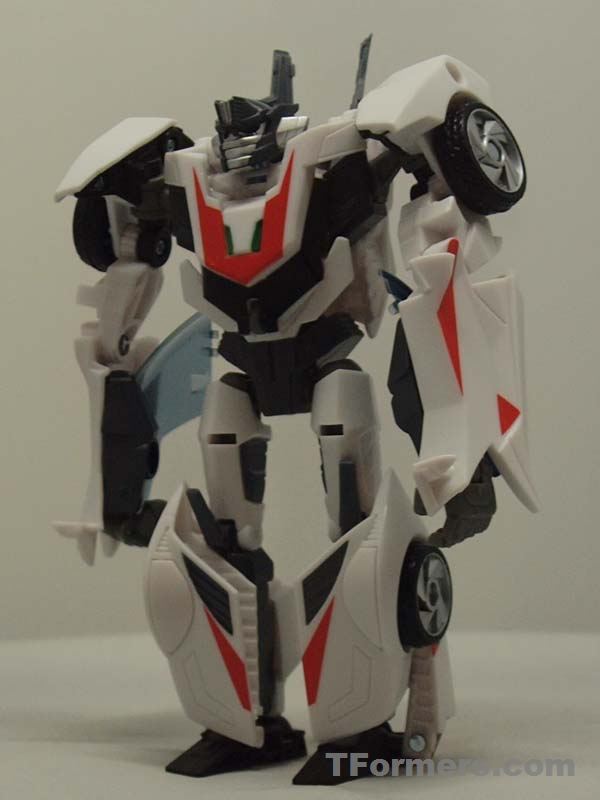 Wheeljack's look carries out nicely in robot mode as well. The white w/ green and red is complimented by dark gray in various locations. The head sculpt is all Wheeljack via the Prime look. Eyes are piped blue. 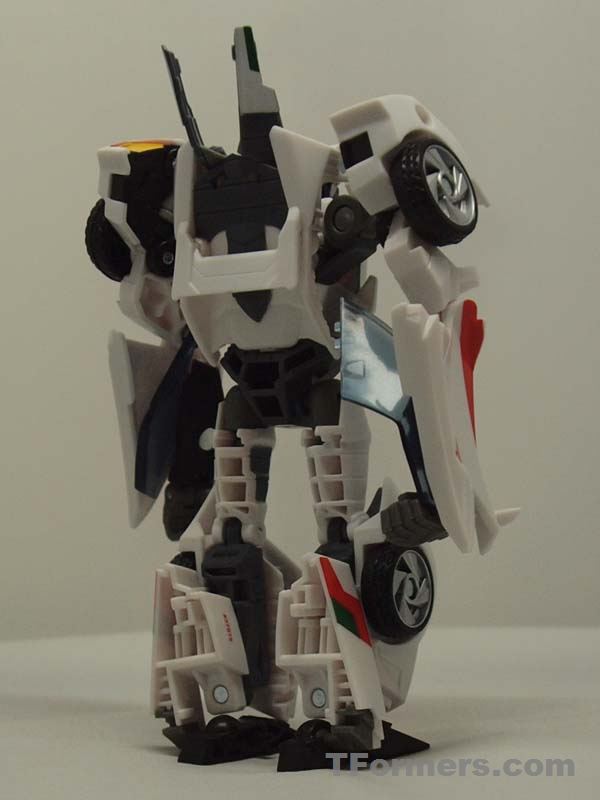 That's not to say he's perfect. The windshield kibble behind his arms gets in the way a bit. His head is also sunken down a bit more than I would like, but the look still works. As for his swords, both are of soft rubber. The base of the blades feature Cybertronian glyphs. You can either peg the swords to his hands pistol style to try and simulate the anime look or hold them by the hilt for something more traditional. 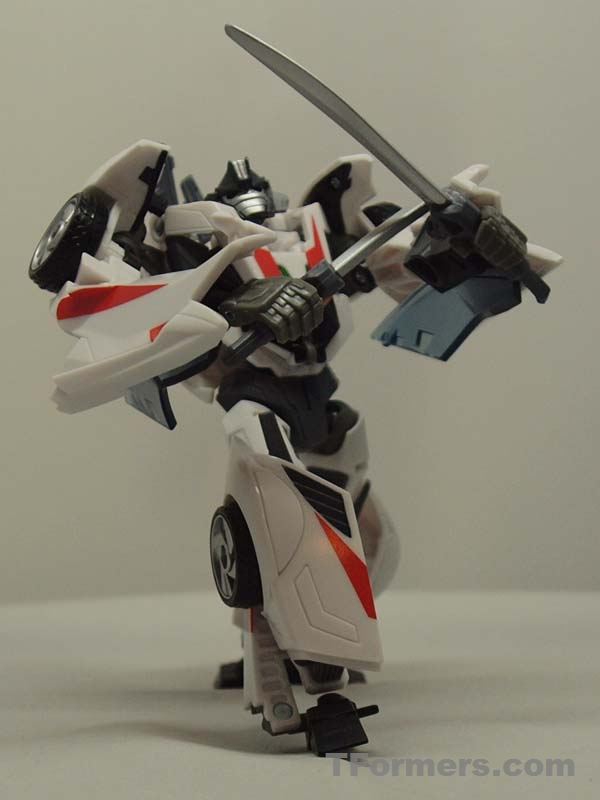 
Straigghtening the legs out after a pose means repositioning the knee armor, which is a bit annoying. As mentioned above, the glass kibble on the forearms might get in the way at times. Otherwise, nicely set up.

As Walmart and Target begin rolling out Prime figures, it seems that the previous worries of high pricing are limited to one store so far. Both big box retailers have so far retained the traditional price points. That's good news, because Wheeljack is worth the $10. Even with the few minor flaws, both modes are stellar and the transformation will likely addict you. Prime figures are looking to be solidly built so far, with no damage risk areas being seen.

So far, the Prime figures have fared well. They have striking designs, good playability and great articulation. So long as you stick with the big box stores, pricing is also looking good. Prime so far has perfectly blended Bayverse aesthetics with a more traditional TF appeal. Let's hope the momentum continues.