Hard to imagine that just 6yrs ago, people were complaining about Bumblebee never being represented. Well, be careful what you wish for. Since 2006, Bumblebee has been a part of almost every single series. It's almost to the point of ad nauseum. Yet, here he is again as one of the main characters of a series. Hopefully not to become the subject of innumerable repaints. This review will see if the RID initial release even warrants repaints.

Bumblebee is a warrior and scout who serves as part of the elite squad commanded by Optimus Prime. Together with his human friend Raf, he stands as Earth's fist line of defense against the evil Decepticons. 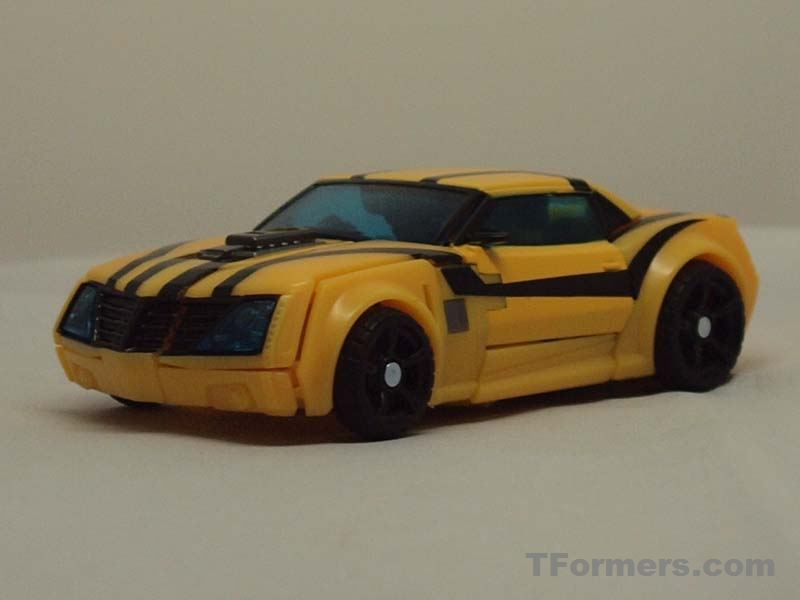 Bumblebee's alt mode is pretty faithful to the anime model, closely resembling the current generation Chevrolet Camaro without being one. Mostly yellow, he sports black stripes in various spots of the bodywork. The headlights and windows are all translucent blue. The engine block sports a port where his dual guns can be placed. Both guns can also be stacked together for added firepower. 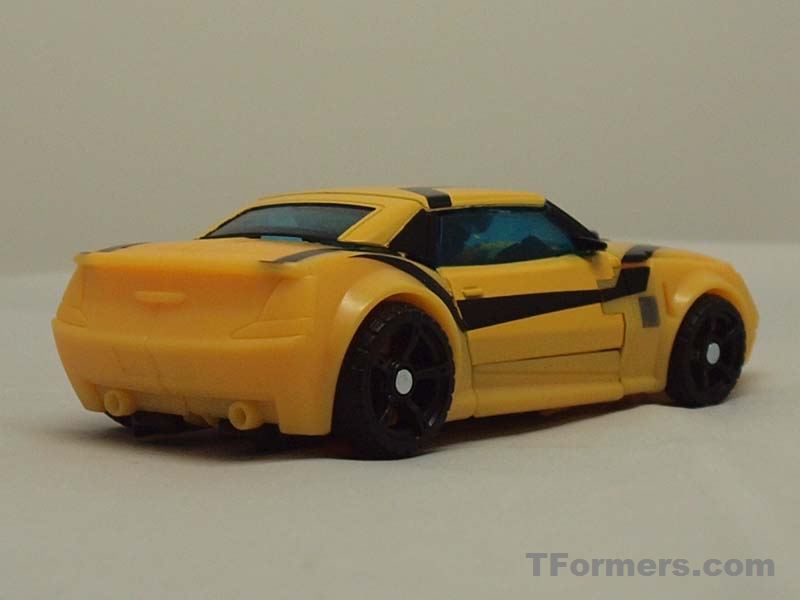 A common complaint on Prime figures thus far has been with lack of paint details. That holds true for Bumblebee. The entire rear deck is unpainted, Which throws off the look a bit. Add mismatched plastics to the complaint list. This is most appearent between the front fender and door, where three shades of yellow can be seen. The roof is also noticebly brighter than most of the body. Bad form, Hasbro.

Whereas most of the Prime figures reviewed thus far has had involved transformations, Bumblebee seems to be a bit of a throwback. In fact, compared to his 2 Autobot associates previously reviewed, he's downright a breeze. Automorph technology appears here, as pulling back on the fenders will split the grille and expose the head. 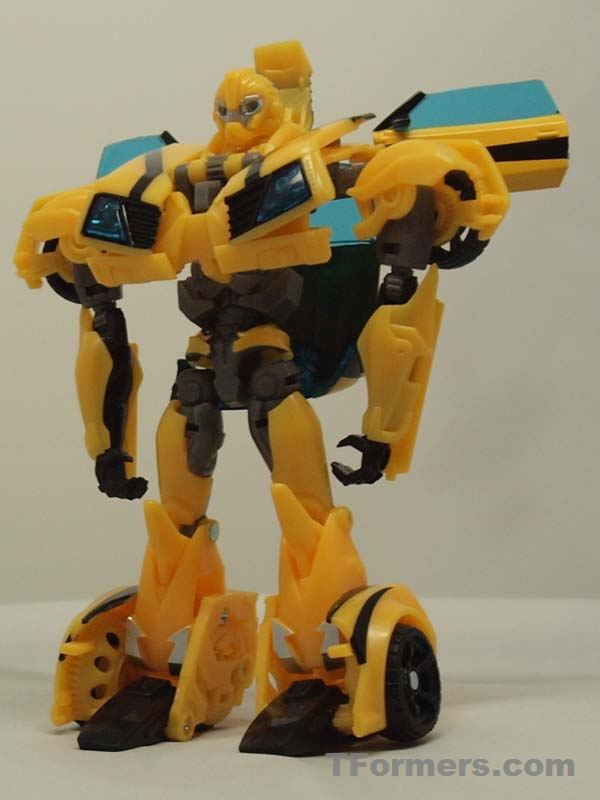 There is definitely regression problems going on with the robot mode. The color scheme is the same, albeit some gray pvc showing up here and there. However, the overall look is simplistic. Almost like a Scout class figure. The head sculpt in particular is unremarkable, lacking any of the qualities of the anime model. At least the eyes are piped blue. 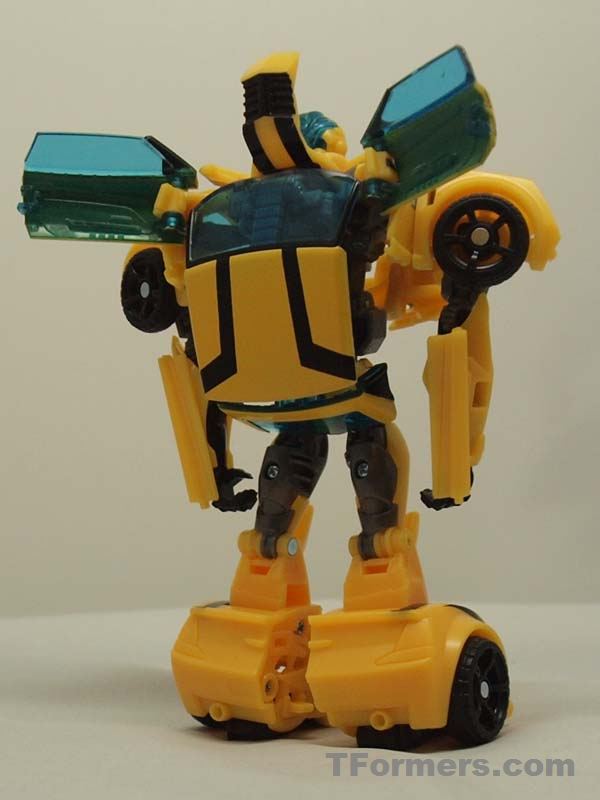 There is also some versitility with the guns. You can keep them stacked and use them as a single weapon, you can port each individual gun in his fists, or port them to his forearms. He also has some moves to match (see below). In the end, though, he comes out looking rather vanilla. The lack of paint apps and the somewhat excessive kibble (hood piece on the back of the head for example) cheapens the figure. 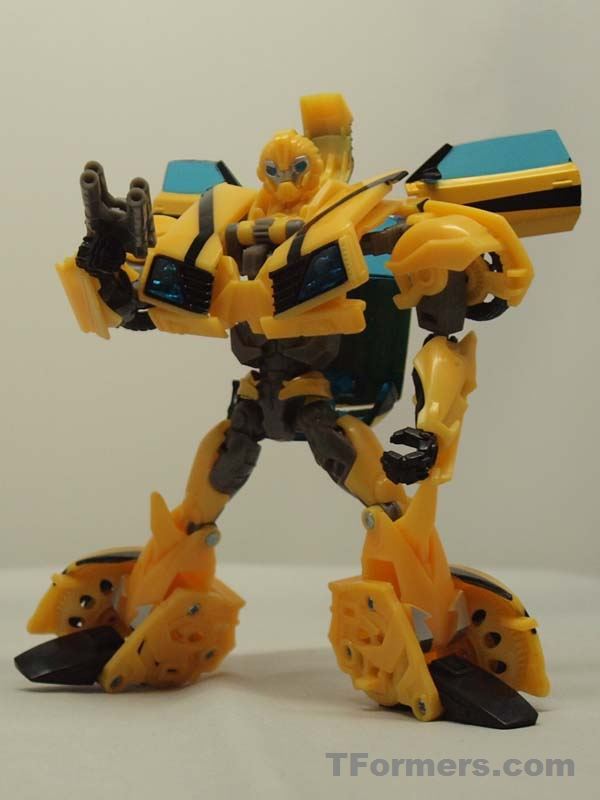 
Articulation is set up pretty well. Shoulder spread can get hung up between the 60 and 75 degree angles.

The lack of paint apps and the multiple hues of yellow in the alt mode is bad enough. The inferior look of the robot mode doesn't help matters. One can only hope the automorph function doesn't resemble the one from 1976 Camaro Bumblebee via the first movie, since they're both similar in design and execution.

This is the first Prime figure to disappoint me. So far, all the figures have had engaging transformations and solid looks. Bumblebee has neither. Maybe Hasbro feels his popularity with the kids needed a 'dumbing down' of sorts. Maybe they're trying to kill appeal for the character (nah). Either way, there's a reason he's the only figure left on the shelves.