Now that all the Autobots of the first wave have been covered, it's time to look at the Decepticons. They are elusive, due to their being shortpacked. Only one Megatron and one Soundwave will be found in each assortment. Never love for the bad guys. However, we've come up with a Megatron and are now ready to give you the lowdown on Transformer's favorite villain.

Megatron began his life as a gladiator, built to fight in the brutal darkness of the Kaon pits. It was there that he learned that the strong survive and the weak perish, and there that he became determined to be the strongest of all. His conquest began there, and has since burned its way across the universe. 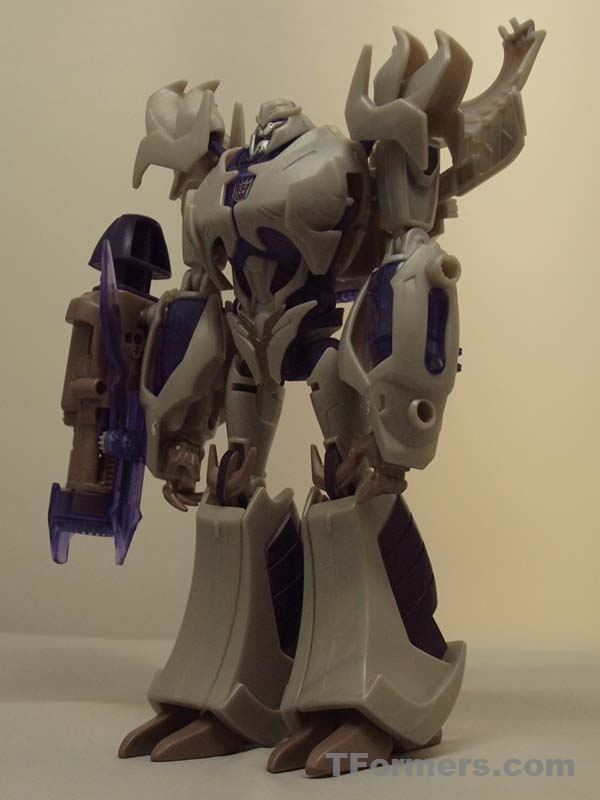 Megatron's bulk in robot mode is accurately portrayed. He is a silverish gray with translucent purple showing in the chest, abdomen, hip and forearms. His hands and fusion cannon are strangely tan in color. The head sculpt is spot on and features purple piping. The silver color is lighter than I'd like it, but what can you do? 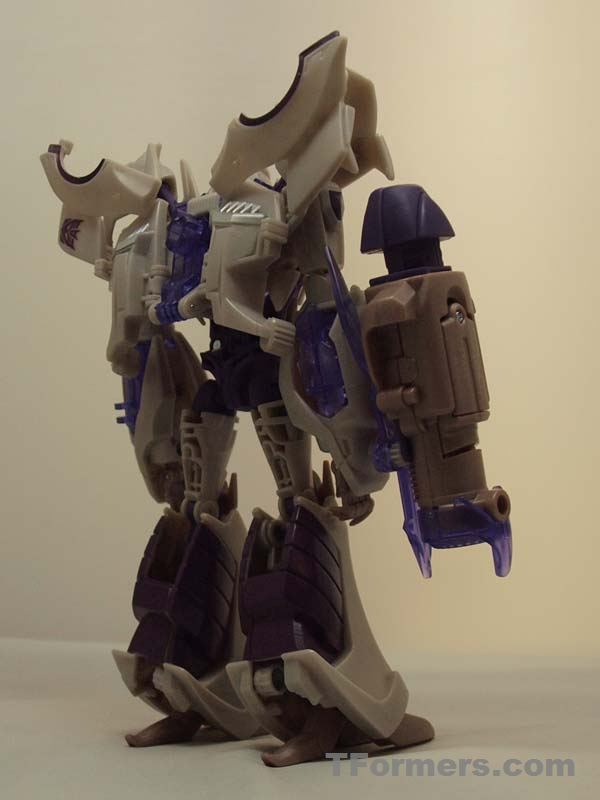 What would Megatron be without his trusty fusion cannon? You can peg the cannon to either his left or right forearm. From there, you can choose the port closest to his elbow or the port closest to his wrist. You know, for those who like choices. Megatron's cannon features MechTech, in which pushing forward on the 'hammer' of the cannon will reveal a blade and emit a red LED. One has to wonder why Hasbro won't put a locking feature on their MechTech. Fortunately, it's easy enough to hold in place with your hand while keeping the figure playable. 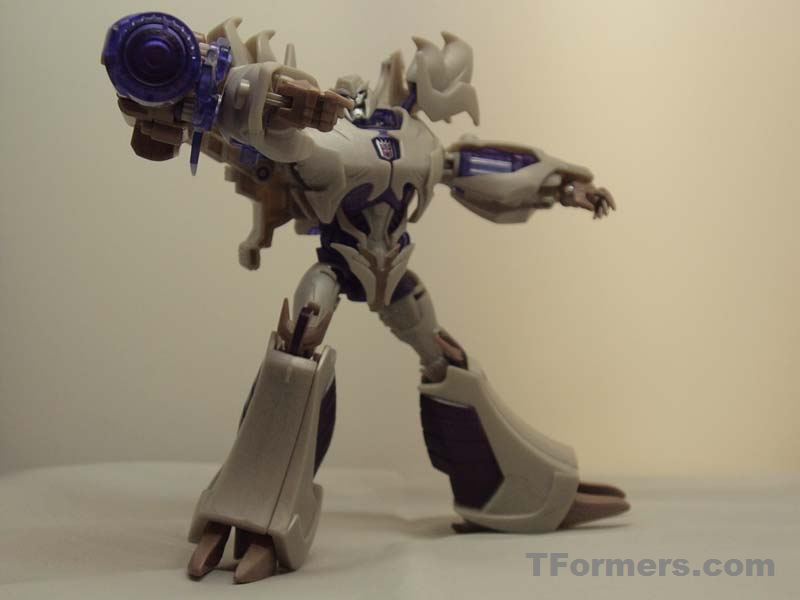 
Shoulder posing will require moving the shoulder armor aside a bit. Otherwise, no complaints. 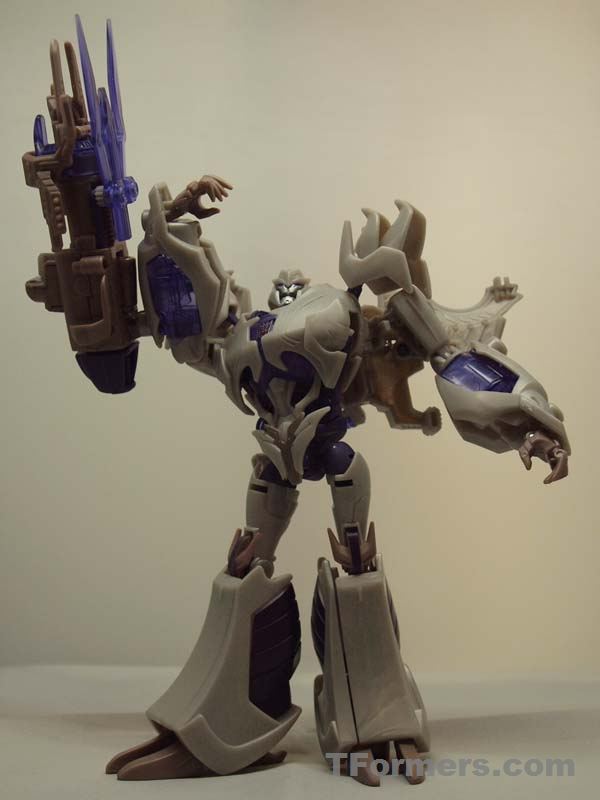 Transformation is pretty involved. Virtually every body part shifts like you wouldn't expect it to on first try. However, it's easy to master. 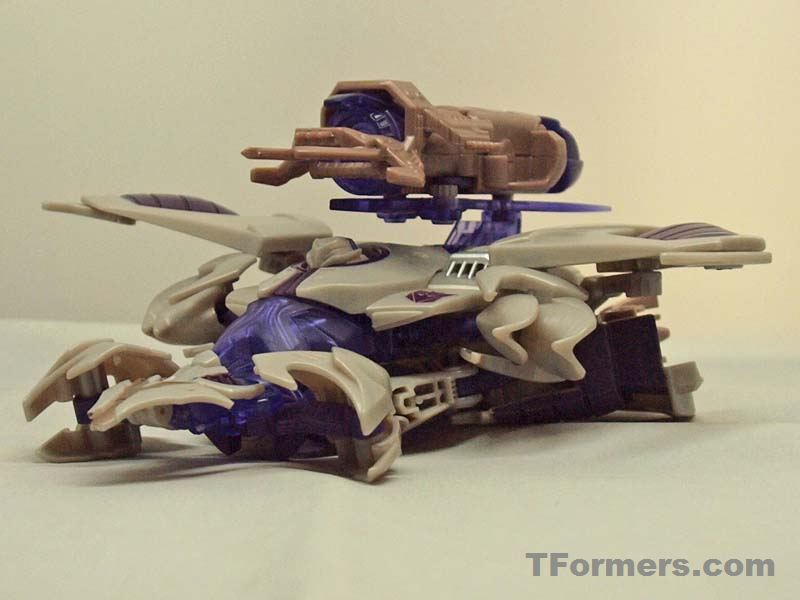 I don't know what it is about giving Megatron a flying alt mode, but it just never works out. His alt mode is a Cybertronian fighter jet, similar in design to the 2007 movie. From the top, it looks pretty sweet. However, from every other angle it resembles a mess. There are just way too many gaps and open panels for my personal liking. Don't even get me started on the semi-exposed head. That in itself knocks off a full star. 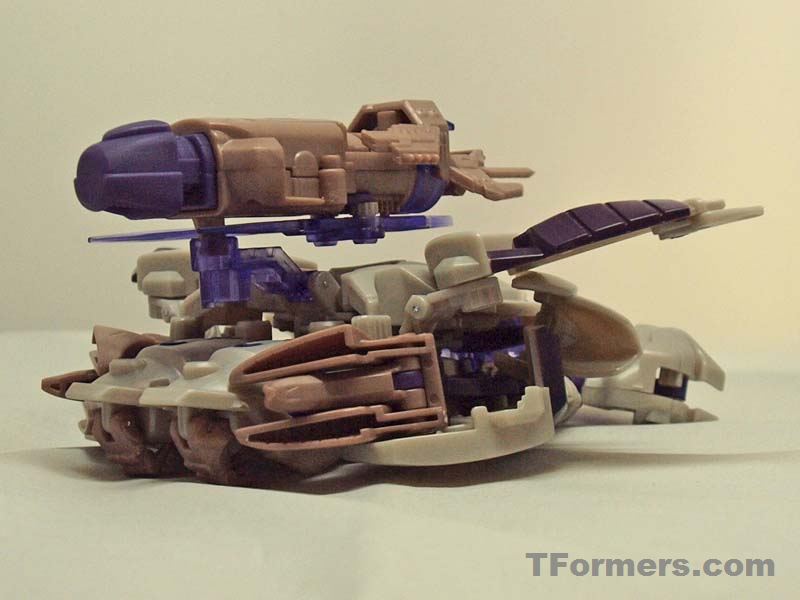 I suppose Cybertronian craft are too macho for landing gear as well. You won't find any here. You will find that his fusion cannon pegs onto a puple arm on top of the craft. You can also activate the blade while it sits on the perch. I knew it would be difficult to translate the anime model's alt mode into an action figure. Looks like it was harder than anyone could have imagined.

The groin plate is one to watch for, as it can easily pop off. Also, with no landing gear the belly of the craft (or sides of the legs) are suseptible to scratching. Beyond that, the lazy alt mode design makes you feel like this was more of a $15 figure than a $20 (or more) figure. I definitely couldn't fathom paying the $25 (K-Mart) or $28 (TRU) price for him.

Keep it in robot mode and you'll think this is one of the better Megatrons made. Put it in alt mode and you'll get visions of 2007 and feel like your childhood got stepped on like a bug. It's definitely a paradox.