Let's face it. Having Soundwave as a voice recorder in alt mode seems so... 80s. He's had a couple of other alt modes since then, including an SUV. However, for Prime Soundwave borrows for the Cybertron line and gives him an aircraft mode. With only one Soundwave packed with 3 Bumblebees in a case, this figure could prove elusive to find. This review will hopefully convince you on whether to go on the hunt.

Soundwave is absolutely devoted to Megatron. He uses his ability to intercept any electronic transmission to ensure the supermacy of his leader, and the eventual victory of the Decepticons over the Autobots. 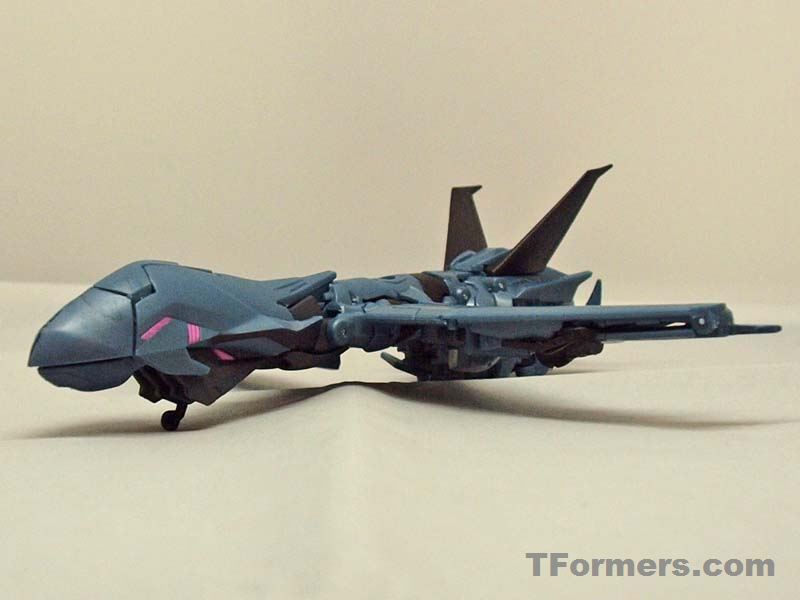 Soundwave's alt mode is an unmanned aerial vehicle (UAV). The design is similar to the Grumann Global Hawk RQ-4 used by the US Navy. Cobalt blue is the color of choice here, with some magenta and black appearing in various spots. 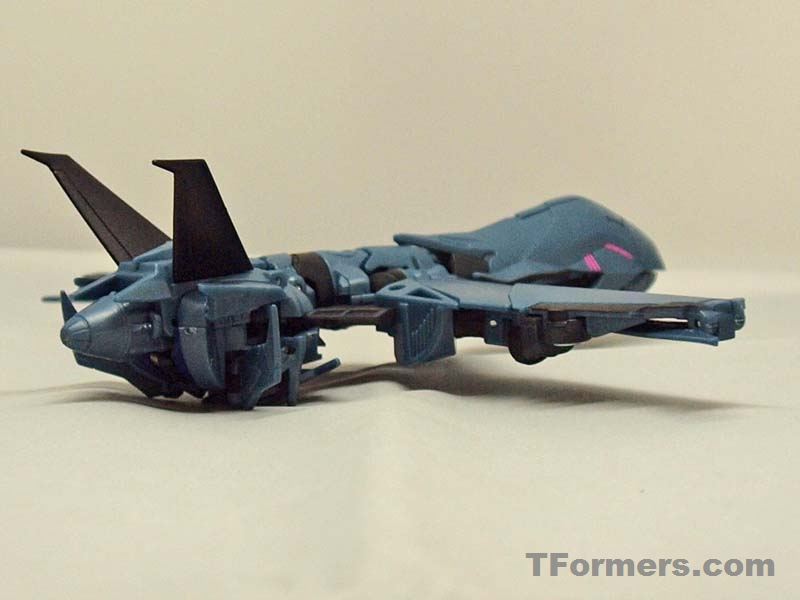 The design overall is sleek in concept but in execution has some flaws. If looking from the top, the fuselage has noticeable gaps. The rear of the craft is a bit of a mess. Looking at the belly, it's all robot kibble. That being said, it still flows together in a strange sort of way. One flaw that is hard to overlook is lack of landing gear. Although he has a nosewheel, there are no rear wheels.

Alt Mode Summary: It's a love/hate relationship... but mostly love.

Transformation is pretty straightforward. There are simple things that can be easily overlooked, such as offsetting the lower legs from the knees slightly and pulling the head up after it spring releases from the back. 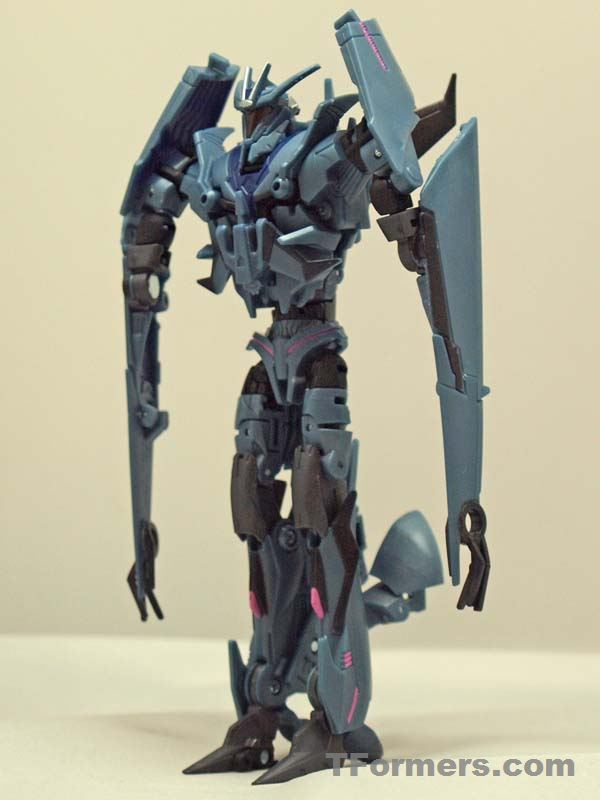 Now this is how Bayverse Soundwave should have looked! Soundwave's robot mode might also conjure up some memories of Cybertron Soundwave, especially the head sculpt. Strangely, while the visor is done in translucent purple, there is no piping. The cobalt blue, magenta and black color scheme remain. 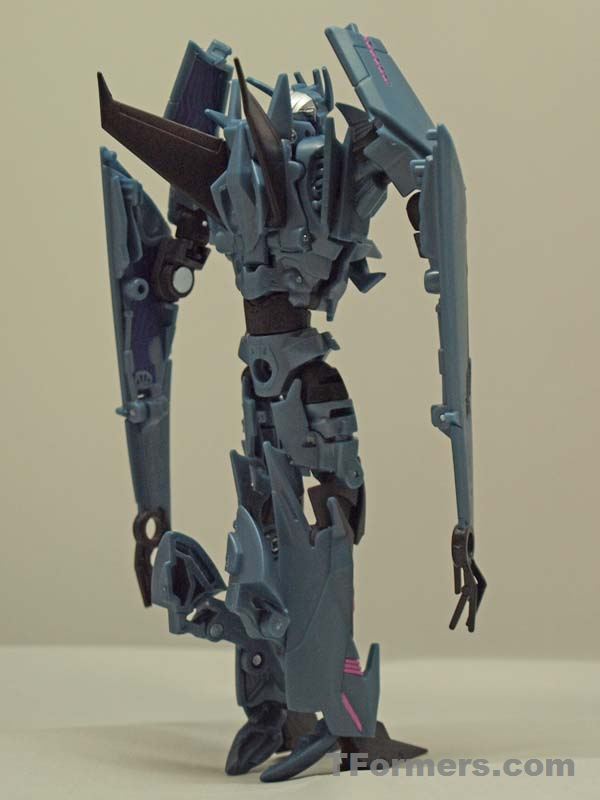 Being that Soundwave is mostly a reconnaisance officer, he packs no weapons. He does, however, pack his faithful drone Laserbeak. In a nod to Victory's Breastforce subline, Laserbeak plugs into Soundwave's chest until called upon. Just know that when Laserbeak is 'unplugged', Soundwave looks a bit... uh... naked in the chest area. 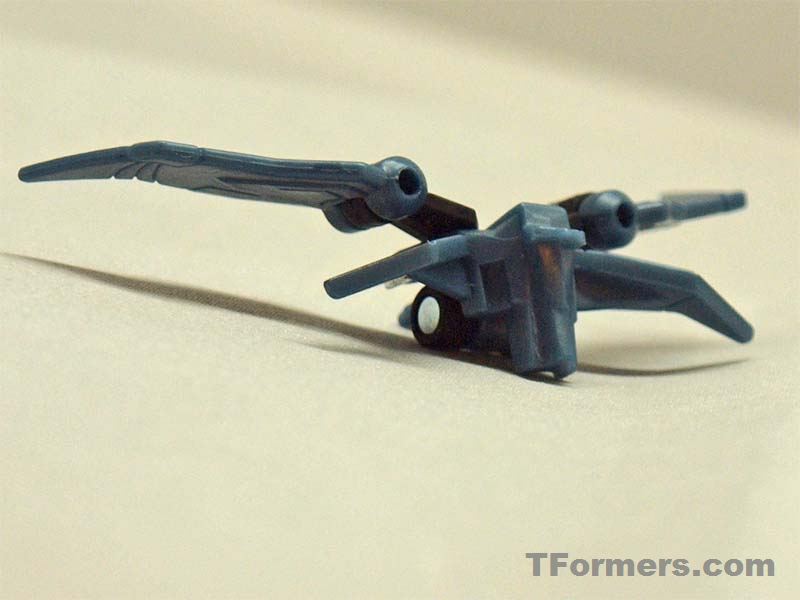 Laserbeak's beast mode reminds me more of Ratbat than a condor. Perhaps this is a setup for the eventual repaint? At any rate, besides the upper wings having a pivoting hinge, Laserbeak is a static figurine. He can plug into either of Soundwave's wrist ports. 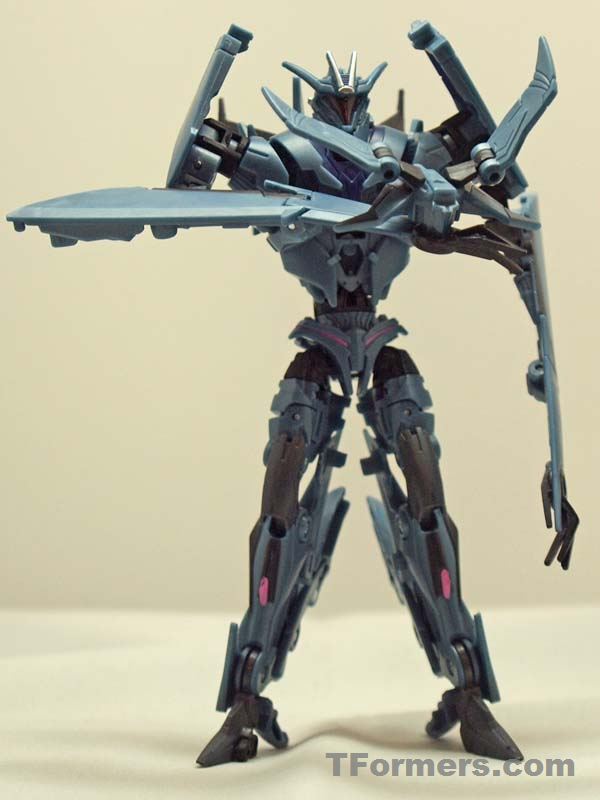 
Kibble gets in the way at crucial spots. Knee bending is severely limited due to the tab that locks in the fuselage to the nose. A small fuselage bit also restricts hip articulation. Shoulder spread is similary hampered. One other note. The feet take some positioning to get balance right. The feet and rear haunches don't always cooperate like you want them to.

There are a couple of areas to watch for. His 'hands' are soft rubber, so they may not stand the test of time. There's also a lot of jutted edges that could wear or break off. Since there's no rear landing wheels, the rear underside of the craft could be subject to scratching or accelerated wear.

This was a very hard figure to scale down to a Deluxe class. Hasbro did a pretty reasonable job of it, but you can't help thinking how much better Soundwave would have turned out if he had a Voyager mold instead. Both modes do have their flaws, but both modes are also so unique and well executed for their size that you end up forgiving the flaws. Being that Soundwave is also shortpacked, this could be the crown jewel of the Prime line without having a perfect score.