Bumblebee doesn't need to talk- his blasters do all the talking he needs. He is fast, smart, and skilled, which means that the Decepticons have nowhere to run when Bumblebee is on their tails!

It's been a while since I got anything in this scale- it was still called the "Legends" class last time, matter of factly. But Hasbro's been doing a lot of work on making this size of figure into an entity unto itself, and I thought my first toy of a new series was as good a time as any to check it out again.

It's definitely recognizeable as Prime Bumblebee, as the round, bright-blue optics attest. But compared to the larger Transformers I've largely dealt in lately, he's extremely basic, as befits the least-expensive Transformer on the market. The face is a pretty nice match, particularly the eyes as I mentioned. The head is permanently backed by a part of the car's hood. The complex CGI model chest is simplified to the point of being just a car hood sitting on top of a narrower torso. It doesn't look bad- it's a pretty typical Transformer configuration, but it's definitely not on-model. The arms are the worst-looking part of it, being as they are just half an arm mounted on the car's side-panel. Very, very Scramble City. The lower torso and legs are a pretty good match but lost a lot of color- black, to be specific. Matter of fact, I'm feeling tempted to paint this when I'm done- the whole figure could use some black paint to bring out the detail. There's a lot to be brought out, though- there's some very nice, very fine detail on the figure's robot parts. 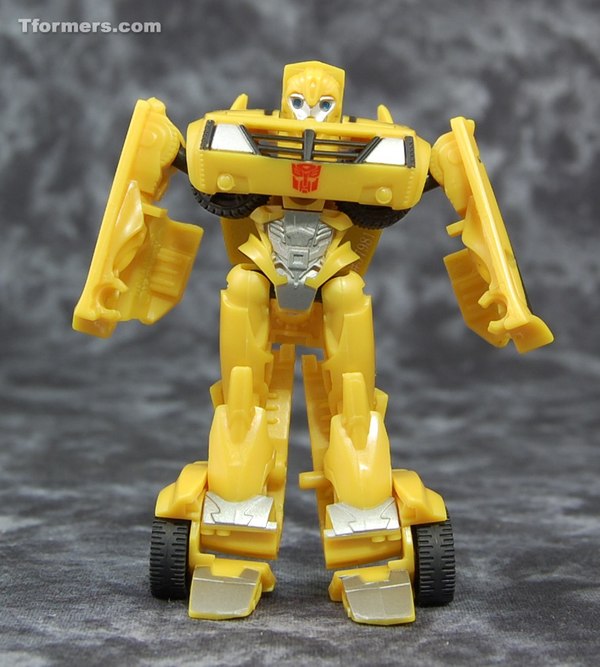 Bumblebee has all of four official points of articulation. The shoulders swivel freely and swing out to the sides, and the hips swing front-to-back with good range and swing outwards some, but not a whole heck of a lot. You can use the transformation joints in the feet to adjust their positions, but that's pretty clearly an accident. One thing I find a bit sad is that, compared to my last Legends figure- Reveal the Shield Megatron -Bumblebee is shorter and has less articulation. That's probably due to the inclusion of accessories though- Bee has a pair of Miyake Joint-compatible hands, and sockets on each forearm to mount weapons to. That was one of the aspects of Energon I never thought was explored fully, so it's nice to see it brought back

Old-school: squeeze the shoulders and legs together and swing up the feet. Also simpler than RTS Megatron by a good margin. Except for the feet, we're talking standard `80s stuff here too. Took me a second to get everything locked down properly, but I've transformed feet more complex than this. 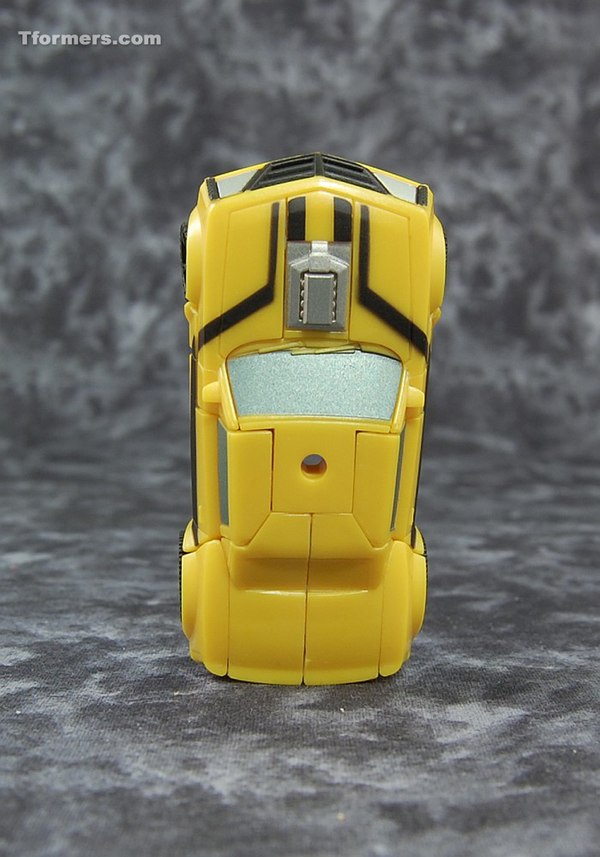 It's in the neighborhood of the Vehicle Mode of the animation, but some key details are off: the back end is longer, and of course there's paint missing as there was in the Robot Mode. But again, the detail is very fine, and very nice. I've gotten full-scale TFs with less detail on the wheels. One thing that is particularly neat: the black stripes from the rear of the car are not painted in, but the transformation seams trace those lines exactly. One of the things I've gotten fed up with is seams on alt-modes that clash with the natural lines of the design, and Bumblebee doesn't do that. It's pretty damn clever. Besides the weapon sockets on the arms being accessible in Vehicle Mode (if a little too low for Bee's own weapon), there's also one on the top of the car. And finally, the car rolls very smoothly- at least I've got something to crash into Bot Shots Optimus Prime until I get a second one. 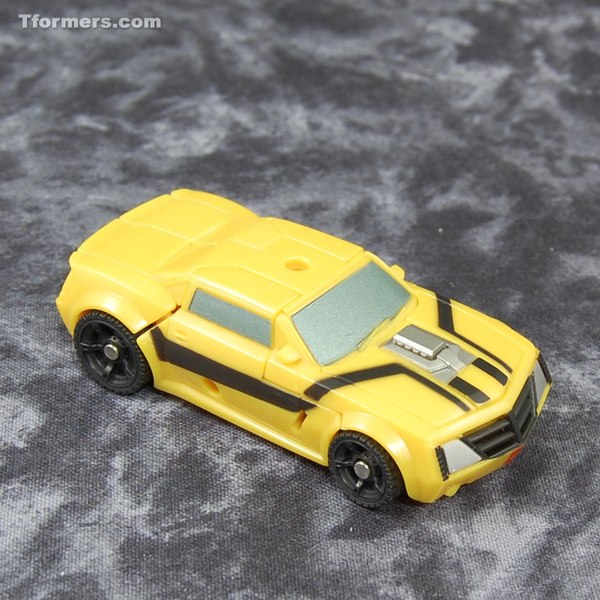 It's a (relatively) large double-barreled gun made of a semi-soft, matte translucent plastic. It's got a peg on the bottom in the normal handgrip spot, and one sticking off the back so you can put it on Legion figures at different angles. You can put it in Bumblebee's hand, or mount it to his arm in a more show-accurate fashion, or put it on the roof of the car. There's also a socket on the weapon so you can mount more weapons on top of it. I really like this gimmick; it's almost exactly what Energon did with its Energon weapons and I had a lot of fun stacking those together in unreasonable ways. My only complaint is that this kind of plastic is kind of grippy, and I'd like to be able to rotate the gun freely when it's on top of the car without fear of twisting the peg off. 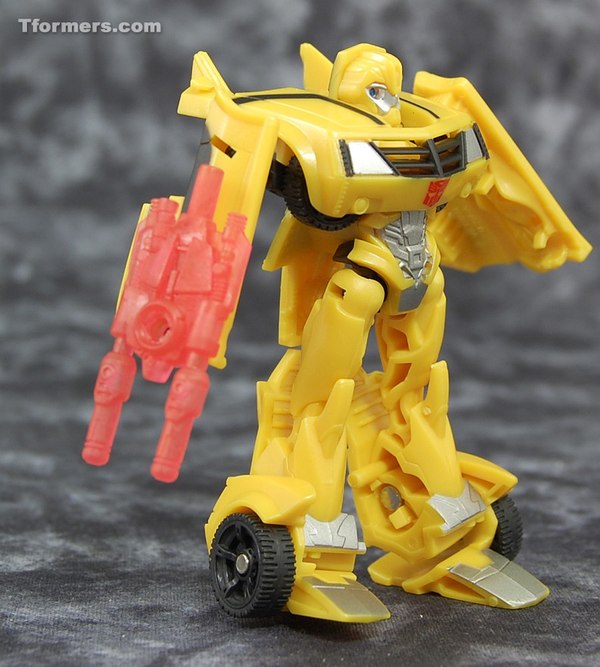 It's not my usual style in terms of Transformers toys, but I kind of like it. The execution of the weaponry gimmick is promising, and I bet you could have a lot of fun with about a half dozen of these. I think I'm going to have to get a Cyberverse Commander-class figure to go with it, if not a Base. That Energon Drill looks pretty neat. Bumblebee is, in terms of the figurereviews.com Non-Numeric Rating Scale, Good for what he is. I'd prefer more articulation of course, but for a cheap, uncomplicated figure he's pretty neat. 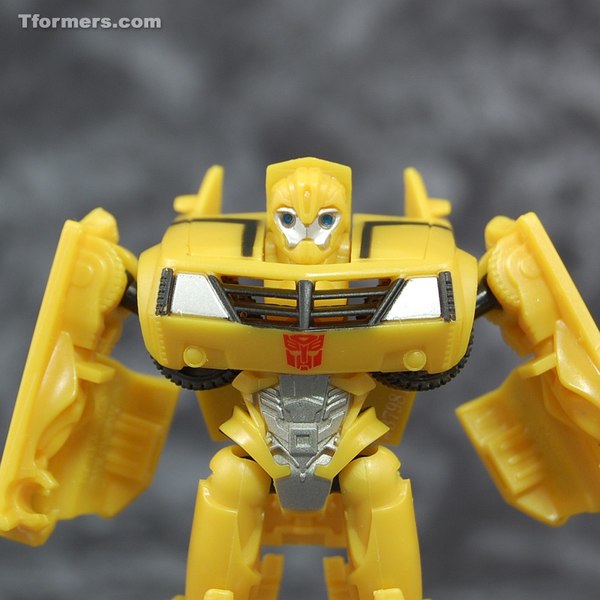