Autobot Ratchet may come off as gruff and impatient, but when it comes down to it, there's no one who cares more for the Autobots on Earth than their talented medic and mechanic.

This is two Transformers shows in a row where Ratchet is pretty much my favorite Autobot. Maybe it should bug me that I identify with the cranky old guy so well. But even if he didn't have Animated's example to build on, this Ratchet has a secret weapon in the voice of Jeffrey Combs. Since Legion Bumblebee was half-decent and it's going to be a while until I see Ratchet's Deluxe wave here (wave 1 is proving elusive enough- except for Bumblebee) I grabbed the Doctor of Doom as soon as I saw him in Legion form.

The first thing I noticed about Ratchet, even before I had him out of the package, is how very polychromatic he is compared to Bumblebee. Like that figure he's not a spot-on match to the animation model in shape or color, but red, white and gray looks a lot more varied and interesting than yellow, black and silver. While a lot of paint details are missing compared to the show, the most glaring one is the lack of the EKG design on his arms that's become associated with Ratchet since the movies. His face is a little bit underdetailed- I won't know until I have him under my light tent whether or not he even has eyes. (As it turns out? No. The big round optics on Bumblebee work wonders at this scale.) 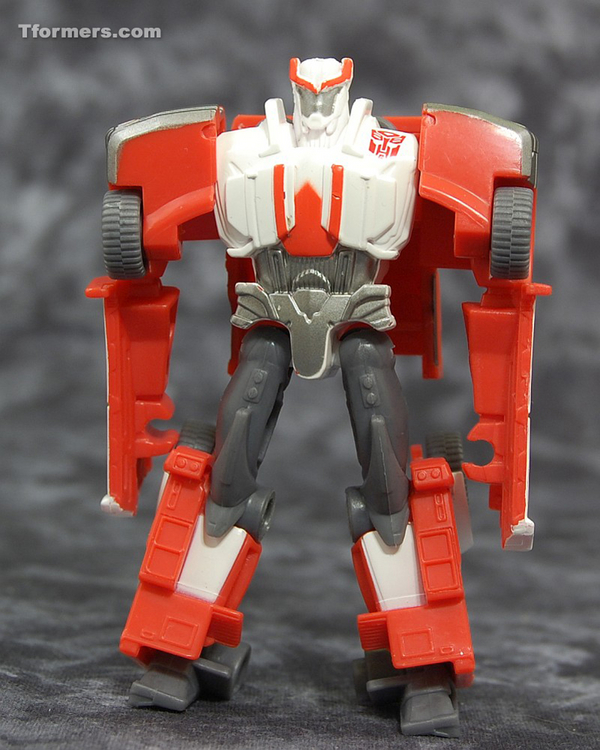 Other than that, there's an overall boxiness to the figure with the arms and legs once again more or less sculpted in relief on the inside of various vehicle panels, but it's something I'm used to with Transformers- it's a very `80s kind of feeling, as I mentioned with Bumblebee. These are really the closest in size and style to the original Mini-Bots that we get, when you get down to it- and I suspect that, coupled with the price, has a lot to do with the Legion class' popularity right now.

Fortunately they're still better articulated than Mini-Bots- and Ratchet's got a couple joints on Bumblebee. There's no neck joint at this scale- I'm just shocked, I tell you! The arms are still solid pieces with Miyake Joint-compatible hands, but the shape here and the nature of the transformation joint gives the shoulders better range than Bee's by a good margin. Though certain angles that would be nice for the blade accessory are still obstructed. But Ratchet, unlike Bumblebee, has knees! On top of which the transformation joints in the ankles help with his posing as well. (One nice touch about the ankle is the faux wheel set into it. It's barely visible from most ankles, but it's there anyway even though it didn't really have to be.) He's not going to be out-posing Classics Mirage anytime soon, but he's a lot more satisfying as a minifigure than Bumblebee, and more like what I expected after owning RTS Megatron.

Also extremely `80s. The shoulders shrug upwards and join together to form the hood, and the legs fold back to become the rear of the ambulance. Super-simple and intuitive. After some of the very ambitious transformation schemes I've encountered in larger Transformers it's sort of refreshing to know that there's something out there as simple as what I enjoyed as a child.

It's an ambulance, and it rolls very freely, so we're good- about the only technical issue a toy car this scale can have is operating without error. The ambulance is largely on-model- but it doesn't have a lot of business not being so, because the model's a box on wheels. The basic color layout is right, though the front fenders should be white. Other than that it suffers from the same lack of fine detail as the Robot Mode, and it hurts more here because of the lack of sculpted detail relative to the robot torso. The missing red stripe down the side, and again the EKG pattern, are the biggest loss. Otherwise, the back end is the least detailed part as with Bumblebee, with the rear windows and tail lights of the ambulance being completely unpainted. Because of the nature of the design, this isn't as evident as it is on Bumblebee though because you can only see the rear windows from the rear- it's not as though there's an invisible line on this figure where window paint just stops. 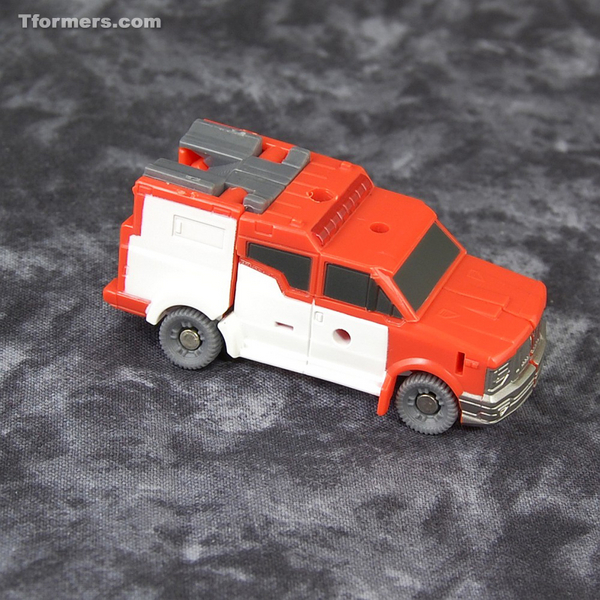 The "Battle Blade!" is a hand weapon patterned after the blades Ratchet uses in the series. While they're a part of his body there, here they're a separate weapon in clear red. It's got 4 pegs sticking off of it, so you can mount it to the socket on Ratchet's hand or arm or back in a variety of ways. It can be an extension of his arm like in the show, or a regular old sword that reminds me of nothing so much as the Buster Sword from Final Fantasy VII. While it has no sockets to mount other weapons the way Bumblebee's blaster does, it makes a nice hefty bayonet for that! 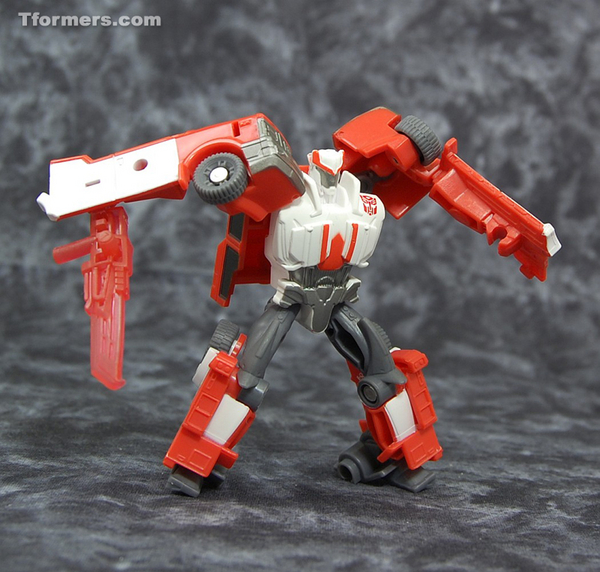 Ratchet improves on most of the things I disliked about Bumblebee that I didn't take to understand as a consequence of the scale: those being color and articulation. Knees may not be much, but when they represent a 33% increase in articulation, they are keenly felt. On the figurereviews.com non-numerical Ratings scale, these improvements bump him up to a Very Good. If the line is more Ratchet than Bumblebee, we're in good shape. 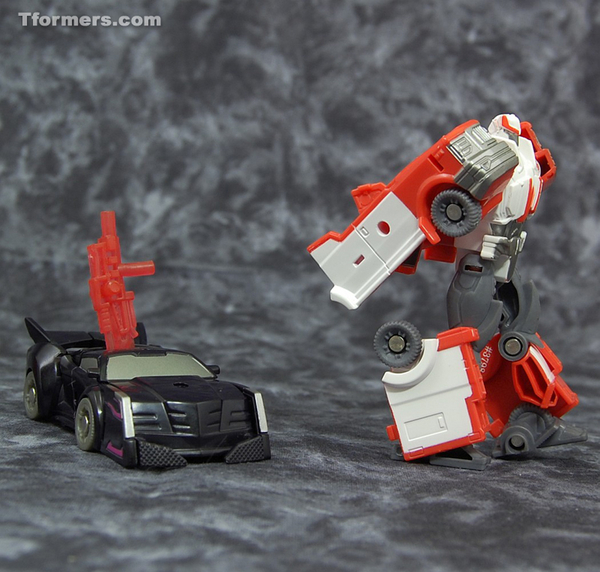