Arcee may be the most skilled fighter among the Autobots on Earth. She works constantly to keep her edge, knowing that one mistake could cost her and her teammates everything.

Out of all the Robots in Disguise figures with First Edition antecedents, Arcee was the only figure I thought to be an improvement, visually speaking, over the FE version. I'm told that this is accomplished with more fakery than the First Edition line- that is, there are robot parts that look like they're formed from motorcycle parts but aren't -but if it's a decent figure I will honestly be fine with that. I like toys that transform as the onscreen model intended, but that gets harder to do by the year. And besides which, I like good toys above all else.

Arcee's a smallish blue motorcycle with streamlined cladding, particularly the sidepanels. She's about in scale with Hasbro's 4" offerings, but unless they have really good ball-jointed hips it'll be a tight fit because of how wide the bike is. That's impossible to get around, because otherwise Arcee wouldn't have the space needed to have arms. But since the toy wasn't designed for passengers anyway it's not anything I'd hold against it. Just a footnote. 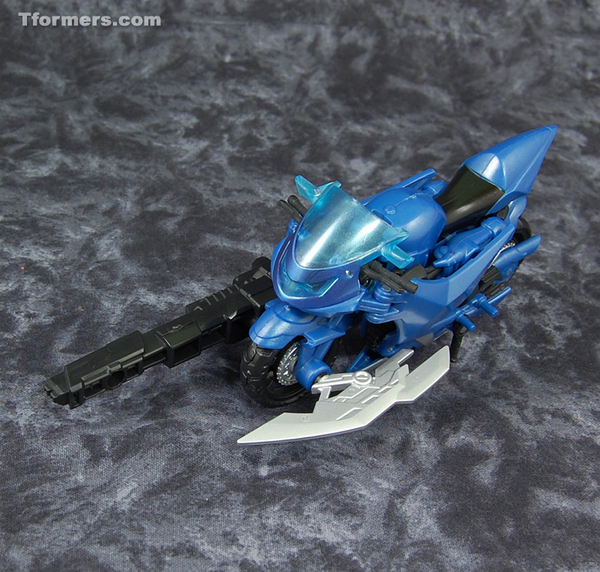 As a motorcycle it looks quite good- at some angles you can make out the parts that will become arms and feet, but they're mostly unobtrusive and don't spoil the illusion of bikehood the toy projects. She's even got an instrument panel between her handlebars, even if the instruments themselves are unpainted. It's a little monochromatic: some of the silver that should be on the bike isn't there, and the clear blue headlight and windshield on the metallic blue piece on the blue bike doesn't stand out very well for some reason. Certainly not as much as I'd want it to. It rolls freely and like most of Hasbro's Deluxe-sized motorbike figures it has a kickstand so it can stand up without assistance. As a photographer, Hasbro, I thank you for thinking of this.

The front wheel hub is molded to serve as a socket for 5mm pegs on each side, so you can attach both her weapons in this mode. As a bonus, there are some extremely thin pegs on the sides near the rear wheel that you can use to mount First Edition Arcee's arm-blades should you have a set. Nice touch!

It's a good level of complexity, and it's not so overcomplicated as to get frustrating. You swing the sidepanels forward, pull the arms free, unfold the legs and torso, swing the front tire over her back and split the rear tire so it can swing up into the backs of her legs. Nothing particularly noteworthy about it, except that it works and works well. It's not the first Arcee to use the split-tire trick; the first Movie Arcee did so as well, but Prime Arcee does so to much better effect. Returning to Vehicle mode is equally easy and everything locks down neatly and securely. That's pretty much what I look for in a good Vehicle Mode. 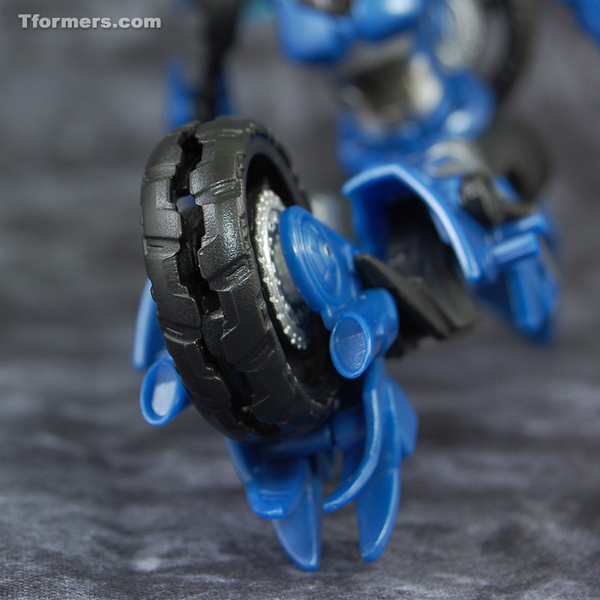 She feels like a decent size for a Deluxe, at least in this mode. But since she's very thin, she may not be a good metric for me to judge the new standard for Deluxes by. But this mode is why I preferred this Arcee to the First Edition release: it's A) much more on-model and B) actually looks feminine in build. These things are connected of course, but it struck me looking at FE Arcee that in an anime themed line, a body type like that would've been male. Not that anime is usually anything close to a good metric of gender issues, but the First Edition figure just looked off to me. At some angles this torso might be going too far in the other direction, but it's closer to what's onscreen, and I'm fine with this. In addition, she's got a better head sculpt- with very effective light-piping(and molded-in pupils!) I might add -and she has her shoulder wings, which further bring her overall shape in line with the animation. The consequence for all this is that there's a big hunk of a bike hanging off her back. You can at least use the wheel hanging there to stow the weapons, but that's a bit clunky-looking and- since Prime weapons are parts of the Transformers' bodies -inaccurate.

With a lot more black and a lot more silver than was visible in Vehicle Mode, she's far less monochromatic now. Paint is pretty good overall, though as with the Animated line before it, there are places where it could use a bit more than it's got. Also, all of Arcee's metallic pink highlights have been rendered in silver. I'm not sure if this is a case of budgetary concerns or a case of "female toys don't sell" concerns, but either way I imagine a lot of people will be wanting to touch that up.

Articulation is largely suitable for a character who does a lot of acrobatic fighting, and solid overall. The neck is about the least articulated part, giving some tilt and complete swivel only if you tilt the head so as to prevent the chin from hitting the collar. We're only talking about Exorcist-level poses, though- ordinary human range is unrestricted. The shoulders swivel freely, though they don't swing out to the sides too far due to the shape and shallowness of the ball-joints. You can use the transformation joints to extend that range somewhat, but when you do you run the risk of hitting the spikes sticking up off of her collarbone. The elbows fold to a tight V and swivel fine- both to be expected on a very slim and simple arm. The wrist is ball-jointed to better hide the hands for transformation, and they give a little bit of extra range to the arm- she comes as close as any Transformer with ball-jointed elbows can to crossing her arms. It's decent for some poses, but not with the weapons- the blade pegs into the forearm, and it just looks weird with the big gun. She has open-molded hands, which Hasbro's been doing a lot of the past few years. They hold the blaster with none of the loose fit or finger-stressing issue of earlier figures with that type of hand, and should work for any 5mm-standard weapon. 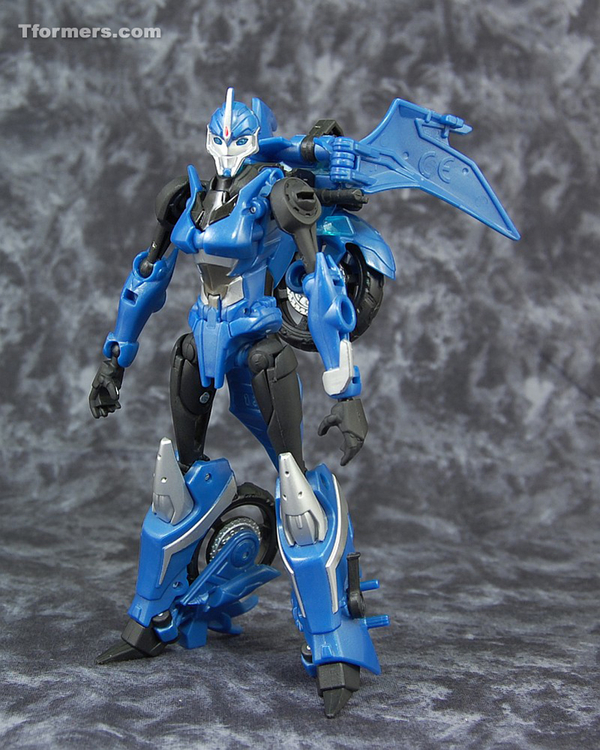 The one piece of articulation that FE Arcee had that this one lacks is a waist- the way the hips swing down for transformation prevents it. The hip ball-joints have great range along the front-to-back axis and fair but not amazing range side-to-side. There are thigh swivels just below the hip, and they help with posing a good bit. The knees bend to a fairly close V, and would go even farther if not for the tires sticking out of the back of her legs. One note here: I do get tired of female robots having to have high-heeled feet. I've seen worse than Arcee's, but she's "wearing" the ugly and uncomfortable-looking super-pointy-toed heels that are in vogue right now. Hate `em. But Arcee balances pretty well in a variety of stances, so on a functional level I can't say too much.

On-model but huge. In the show it's as long and roughly as thick as her forearm; here's it's as long as her entire arm and much thicker. Worst part is, as far as I can tell this represents a significant downgrade in size from First Edition Arcee's blades! If you're going for show-accuracy, the single point should be facing the wrist. You can also put the blade in her hand, or use it as a bayonet with the blaster if you like. It works well for all of these, with the only downside being that there's just one of them. Two would've been preferable. 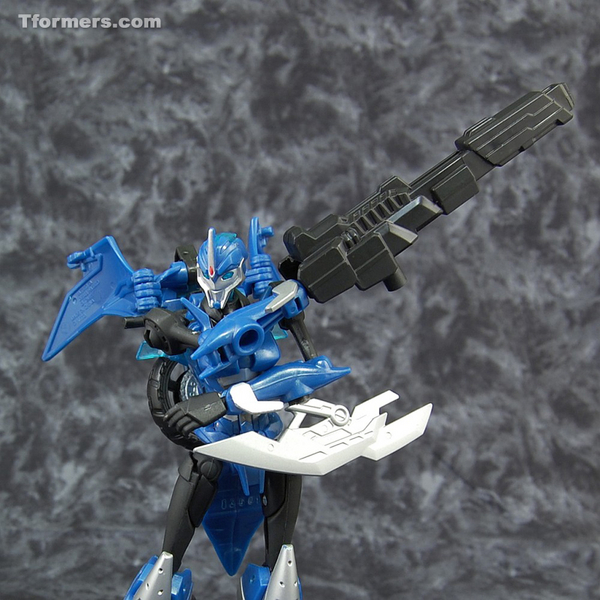 Also really huge. Like the blade, Arcee's forearm transforms into this weapon in the animation; that being the case, there's no reason it should be longer than her whole arm! It's also plain black, which is a bit of a disappointment- I'd rather have seen something in the color scheme of the show. It is at least impressive-looking, but considering I went for the more show-accurate Arcee over the taller, possibly better-engineered one, impressive isn't my first concern here. I hope it sells toys, because it's a toy worth selling, but when you get down to it I can't help but keep thinking that if the weapons had been the correct size there would likely have been room and budget for two of each in the package.

That all said, I'm really happy with Arcee on the whole. As my first Prime Deluxe, there's nothing that would make me want her to be my last. And she looks good in both modes and is still articulated nicely- a less-kibbled transformation takes a distant third to me in terms of priorities. She rates Excellent on the Figurereviews.com Non-Numeric Rating Scale, and if you see one at the store I'd say she's worth your money- especially if the alternative is First Edition Arcee, which'd run you much more and doesn't look as good. 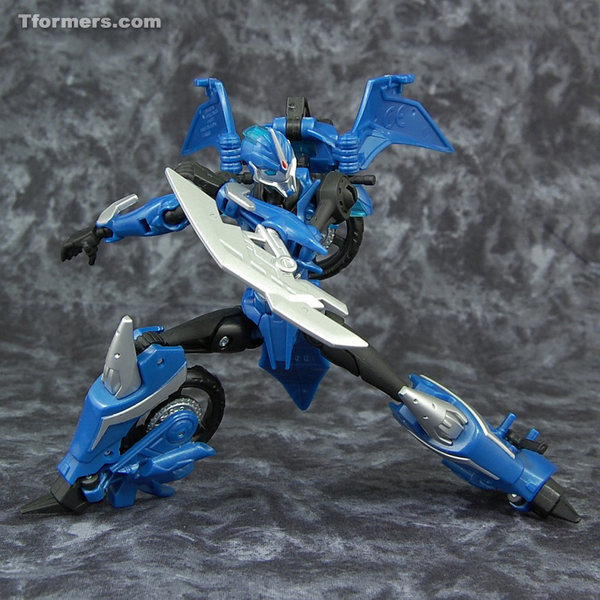