Robots In Disguise issue 3 written by John Barber debuts Wednesday morning at your local comic shop. We are three issues in and it's going as strong as ever! Lines are being drawn and this issue shows the pressure cooker is about to let off a bit of steam! 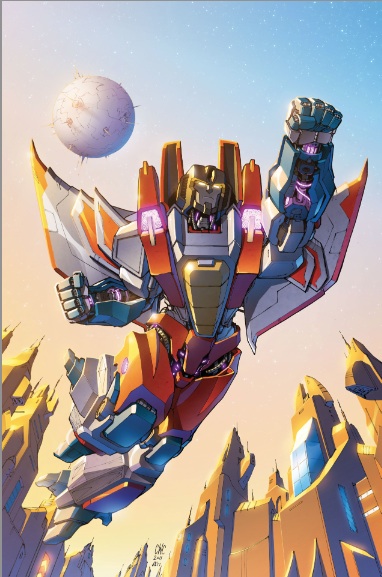 
In Issue two Ratbat met with a terrible demise and Starscream expertly pulled off a coup without firing a shot in the Decepticon ranks. This issue he continues to build his reputation as the face of someone to trust in the new established Cybertronian government. And he keeps his secrets well. Who knows when he'll be using what he knows to blackmail Prowl? But it's nice to see he's taken on a new role and while he's got everyone eating out of his hands, he's still the same Starscream that is always looking for his best advantage.

The major threat of this issue is the strange explosions tearing at what Iacon has built for it's residents. Wheeljack is brought in to investigate and find out who is doing it and why? One huge bill to pay that isn't so easy at first to solve. While Wheeljack investigates, the Autobots, Decepticons, and Unaligned Cybertronians keep pointing fingers at each other over who's responsible for what. The tension is great. For the amount of blame casting that is put out there, there are certainly a few moments where some characters are able to see past their previous differences. And then the bombs go off ripping some of those alliances apart right on the page.

And don't worry Prowl, you did me a favor, I pay my debts!

Surprisingly enough, it is when Wheeljack commits to see things from Starscream's point of view that things become interesting. Jack is all about saving lives and that's what's most important here. It isn't until Wheeljack and Starscream get into a heated argument that the solution of their exploding threat hits him. And they both spring into action because they only have minutes until more lives are at risk! But in the aftermath of their resolution, a twist. For as much progress forward was made, there are still those who can't move forward so easily. And a new problem erupts.

The art by Andrew Griffith continues to be amazingly consistent. And it's colored beautifully by Josh Perez. Griffith gets to bring these characters to life with expressions that emote the distaste and reflection the story beats hit on. Perez's colors gives this exquisite progression from a rainy overcast background to a night scene. And by the end of the comic its a beautiful sunrise. It made the issue for me. This comic looks good and one can only think these creators take a sense of pride in doing the best they can do for fans to enjoy! 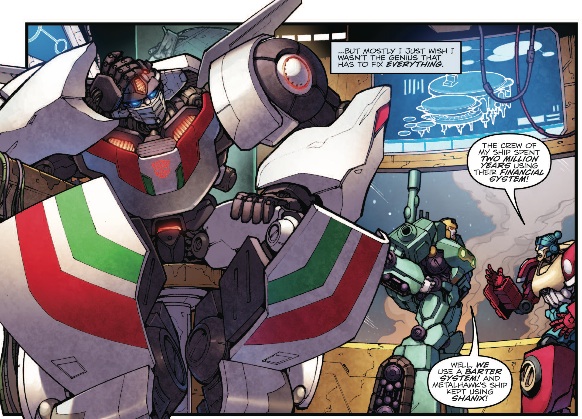 Look it's a sparkly Jack! Makes me want to pull the toy out of the box!

There's great characterization, conflicts, there's a bit of a twist, pace is consistent, there's several parts where I laughed, dialogue worked for me, explosions, action… consequences of decisions… it's a really great issue. I can't say enough things about this comic to make Transformers fans go out and buy it. Each issue is just working so well, the melting pot and aftermath of getting all of them to work together is believable and well written. Another 9 out of 10 stars from me! SO PICK IT UP!