The bravest and most powerful of the Autobots is also their commander - the legendary Optimus Prime! His goal is nothing less than the defeat of Megatron and the safety of the universe.

At last, Cyberverse Commanders! I've been hunting for these guys ever since I discovered how much I liked the Legion class stuff, and today I found three out of four. So since we started Legion with the obvious choice of Bumblebee, let's start off the Commander class with the equally obvious choice of Optimus Prime!

I'm kind of ambivalent about Optimus as a character in Transformers: Prime, though I thought the recent "Orion Pax" miniseries added a bit of depth to the character. Honestly I preferred the action-heroish, John Wayne aspect of G1 Prime, who has been almost completely displaced by the grandfatherly, somewhat mystic Prime that the live-action movies intuited from (I have come to assume) nothing except the animated The Transformers: The Movie. But visually, as a softening, humanizing simplification of the live-action design, I welcome it wholeheartedly because Live-Action Optimus needed all three. And on an unrelated note, it's pleasing to see his Tech Specs aren't straight tens. He has some nines and eights, and even a seven(Speed)!

It's nearly twice as tall as the Legion figures- still smaller than the old Scout class, but much meatier than Legions, and in a good way. It's a fair likeness to Prime Prime- as with some of the smaller figures the optics aren't painted, but the head sculpt is larger and more detailed here so it's not as detrimental. The arms are a fair match - with the addition of some stray truck parts. Naturally with all the fudging possible in animation, the torso isn't a dead ringer for the CGI model, but it's definitely recognizeable. The colors on the torso don't quite line up either- the red should be on the ribcage area rather than around the windows. The back has a ton of sockets for stowing weapons with the Cyberverse 3mm peg standard. The back is made entirely of clear blue plastic which shows through the front of the figure, supposedly for use with lights in some of the larger playsets and figures. There's some detailing on the inside that shines through- I think I might see the Matrix, but it might just be generic techy detail. 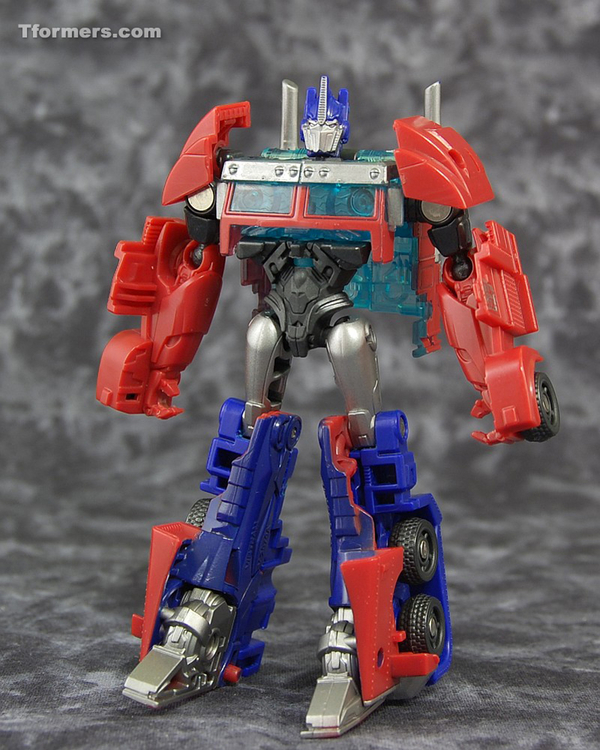 One nice thing on this toy that's not true of all the larger versions of this Optimus: the windows on the torso are the actual truck windows and the shoulder armor is the genuine wind deflector. I guess there's not room for as many faux-truck-bits at this scale! The one thing that is kind of odd: the insides of the legs are sculpted and look appropriate to the Robot Mode, while the outsides are more clearly truck parts and less streamlined. A couple swivels would fix that, but I guess they weren't in the budget. The bigger issue with that is how the blue paint doesn't wrap around the leg, even though the bulk of the leg isn't visible in Vehicle Mode. It's an oversight, and it doesn't help the look of the leg at all.

Articulation is definitely Scoutier than it is Legionary. We get a head swivel here, the first one I've seen in Cyberverse. The shoulders are universal joints which can swivel 360 degrees (if you manuver the shoulder armor out of the way) and swing straight out to the sides. The transformation joints mean the shoulders can sag sometimes, especially under the weight of the guns. Likewise the plastic tolerances are a bit lacking in the ball-jointed elbows, which have similar but milder drooping problems. Swiveling the arms can be tricky as well due to the short-upper-limbed proportions of the Prime designs. The hands, which are part of the same forearm piece, hold the weapons well enough but the toy came to me with slightly stressed hands out of package. White knuckles on hands this small concern me. The hips are ball-joints with great range in all directions; the high placement of the knees prevent a lot of functional poses, but still allow for a fair number of stances. While I'm sure it was an accident, the transformation joint in the feet can be put to use for a bit of posing, and the feet are big enough that balance is rarely an issue. Overall it's a lot better than any Legion figure I've reviewed so far- for roughly twice the price, it better be!

Super-complex by Legion standards, but happily enough it's nothing that'll throw anyone. Combine the G1 Prime transformation (swing legs back, fold head down and arms in) with the unfolding Movie Prime legs, and you've pretty much got it. I like how the legs unfold here, with the front half becoming the nose of the truck and the rear half becoming the back end. Just remember to turn Optimus' head around backwards before you fold it back because otherwise he'll be staring out of the back of the cab at you the entire time. 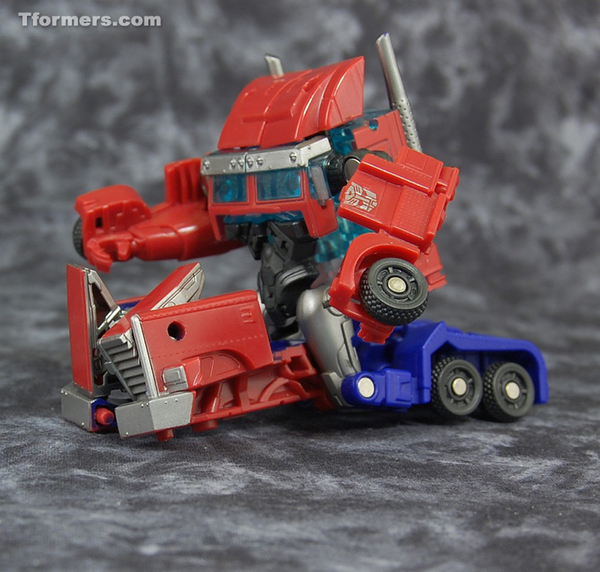 I never particularly minded Optimus Prime not being a cab-forward truck, but I do prefer him with a red cab. Same as the Robot Mode, the Prime model draws most of its inspiration from the movie truck, but simplified color really does help. I also like the addition of the air deflector quite a bit. The detail level is quite nice, with rivets along the hood of the cab and a tiny shape that's clearly supposed to be an Autobot badge on the radiator. (Maybe a bit too much detail, since there's no undetailed space to tampograph the silver Autobot sigils onto the sides cleanly...) With the head turned around it's a tiny, nondescript speck behind the headache rack that is the only vestige of the Robot Mode. I've seen much larger Prime toys do a worse job of this. What could be done better is the paint on the hood - the lack of wraparound on the legs now hurts in the other direction, making the seams on the hood look somewhat blue and really accentuate them on what should be an unbroken red surface. It's a pity.

As with the rest of Cyberverse, there's 3mm hardpoints all over the truck: two on the hood, two farther back on the sides, and two on top of the wind deflector. The ones that were accessible on the back in Robot Mode aren't reachable in this mode due to the shape of the rear of the cab, but that's still a fair number of options. Interestingly, the trailer hitch on the back is a 5mm socket. I don't know if the movie Cyberverse trailer will attach to this or not, but I'd like to find out. If not, perhaps we'll see a trailer for Prime Prime in the future.

As with Ratchet's Battle Blade, the guns are designed to sit low enough on Prime's arms to look like they're part of his arms as they are on the show. It's nice that he has two of them, where Bumblebee and Ratchet have to steal Arcee and Cliffjumper's weapons to dual-wield. (and leave their compatriots unarmed worse yet!) As with the rest of the Cyberverse weapons, there's three or four 3mm posts for mounting the gun to the figure and/or other weapons. I had a little bit of a hard time getting them plugged into the hardpoints on the air deflector, but otherwise they work just fine and look pretty nice. I'm torn between liking him having both guns or wishing for a gun and a sword as Voyager RiD Prime has- if we do get another release of this Prime with a trailer and his swords, I'll probably end up buying it again. 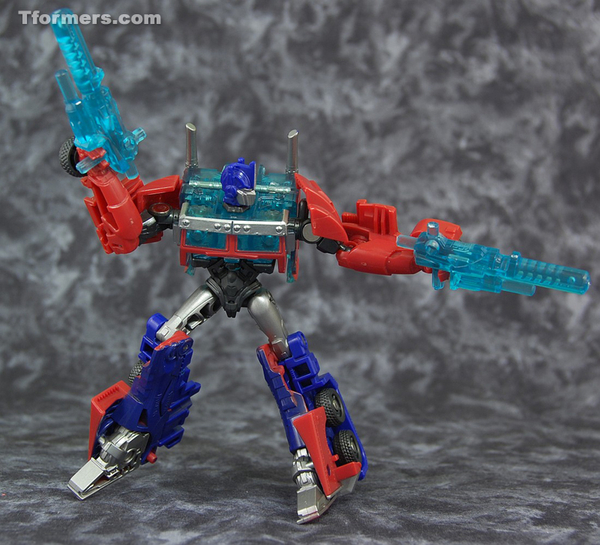 It's of the episode "Masters and Students," which is the first episode to follow the five-part "Darkness Rising" miniseries. It's a decent enough episode. Unfortunately, all of the Commander-class figures I got come with Masters and Students. That seems like a bit of a misstep to me- we should have focus episodes for each of the Commander characters in here if possible. It's still a nice bonus, but I think if there were different episodes with each figure that'd provide even greater impetus for kids and parents to track down every figure in the assortment.

I'm glad I finally found Commanders. Optimus Prime is a good-looking figure and nicely poseable for his size. I paid about $9 for him, which despite the SRP Hasbro's website gives seems to be the standard. I feel that's just a bit high, but he feels a lot less like a "budget" toy than the Legion figures do, so I'm largely satisfied for the price. If I could change three things about the figure, I'd improve plastic tolerances in the arms, paint coverage in the legs, and ensure differing pack-in discs for each figure in the Commander line. But all told, he's Very Good on the Figurereviews.com Non-Numeric Rating Scale. 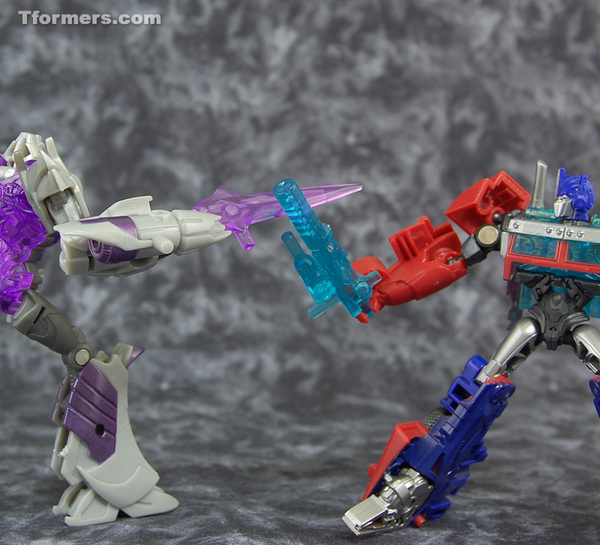