Release Data: Released in the US as part of the second assortment of the Reveal The Shield sub-branding in February 2011 at a retail price of US$11.99.

Bumblebee is always ready for anything. He has an arsenal of gadgets designed just for him, which he can use to meet the needs of any mission. No matter where the Decepticons hide – whether they flee to the deepest ocean, or disappear into the clouds – Bumblebee is ready to pursue and destroy them.

If I buy the same mold twice, I very rarely buy the same character from the same mold. And I initially wasn't planning on getting this Bumblebee, since the original Classics release suited me just fine. It was the only thing from the elusive Wave 2 of Reveal the Shield Deluxes that I wasn't planning on getting, matter of fact. But sometimes when you see something in person, it just grabs you. And when I saw the nice, deep yellow of this figure in the store, and how good it looked with the Movie-inspired vehicle deco, it was all over.

He's not a Volkswagen, but he's closer to that than to a Camaro- which makes sense since this mold predates the movie. It's a compact car of indeterminate make, with a spoiler which squares off the somewhat rounded back end and lessens any likeness the toy might've had to Volkswagen Beetles, new or old. You can see a couple of silver and black seats in the open front windows, and it's always nice when non-Alternator molds bother with any kind of internal car bits. It also has a trailer hitch in back for the Wave Crusher and its trailer. (Also a spot for a license plate which is not painted on either version of the mold. Which is fine, because I can't think of any really good gag license plates to put there, unlike with Universe Hot Shot and Ratchet.) Toywise, it rolls well and the transformation seams are such that, while they're not particularly hidden, they also don't make the car look too hideously busy. 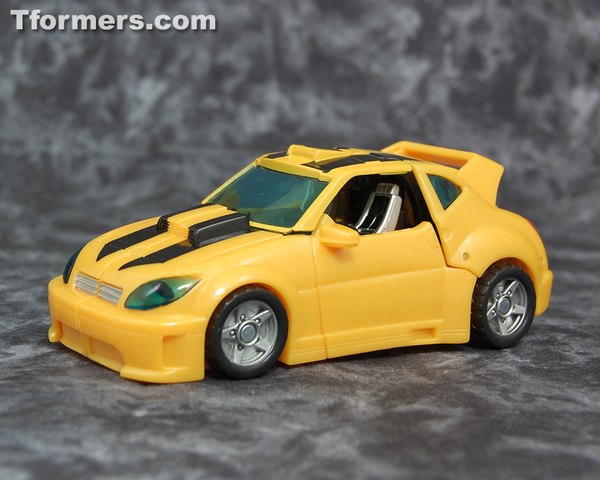 The materials and deco here inspired by movie Bumblebee: a more vivid yellow, a deeper clear blue for windows and headlights, and black stripes running along the hood and roof. The first release of Classics Bumblebee was a more lemony yellow which favored the original Mini-Car, and had a clear plastic so faintly blue it was barely noticeable. It also had pearlescent white stripes and designs which I was never quite 100% happy with. The only thing I find superior on the original car's deco are the gray air intakes on the bottom of the front bumper; the runners containing this part and Bumblebee's forearms have been changed to yellow. The other change which looks pretty nice is that the rubsign lacks the silver frame of the 1985 and Classics models. This version might even have worked on the unmodified Classics Bee mold; the vent on the car's roof was widened to better accomodate the rubsign halfway through production.

The first run of Classics was generally in what I'd consider a "sweet spot" for Transformers complexity, being satisfying but not overcomplicated or frustrating. Bumblebee is probably my favorite in the line, with a simple but effective transformation that retains the basic layout of the original toy: the arms come out of the sides, the roof and windshield of the car become the torso, and the front of the car becomes feet. You end up with the entirety of the sidepanels on the outsides of the arms, but they lock down firmly which helps minimize their frustration. Returning to Vehicle Mode is equally easy provided you remember to tilt the head back before raising the platform it sits on. The plastic tolerances are a bit more snug than the 2006 version though, and so it can be a little bit of a tight fit aligning all the vehicle parts.

Coming back to this figure after a while, I can see that War for Cybertron Bumblebee was trying to ape the basic roundness of this Bumblebee's upper body, but the proportions of the limbs were too spindly to make it work. Here, it works. Bumblebee is shorter and pudgier than most Autobots in a very kid-appeal way, and a fair bit of the vehicle's mass has become backpack here to allow those proportions. This version has more and better yellow than the original, particularly on the forearms, and that actually puts it closer to the original animation styling. I wish the seats folded a bit more flush to his thighs- Universe Hound really perfected that concept. Of course, without the silver forearms the silver thighs stand out a bit as the only silver parts on the Robot Mode, but it doesn't look too bad. And with the black stripes on his chest and legs, making them black as on the original figure and animation model would be too much black- so it works. I kind of like the look of the black stripes, myself: the ones on the chest put me in mind of suspenders, or possibly a harness for his jetpack. The rubsign from the roof is now in the middle of his chest, as it should be. The sidepanels on his arms are as big as the arms themselves, but they don't look bad because they're placed well and aren't at odd angles- certainly not as overbearing and obstructive as the big chunks of truck hanging off of Classics Voyager Optimus Prime's arms. 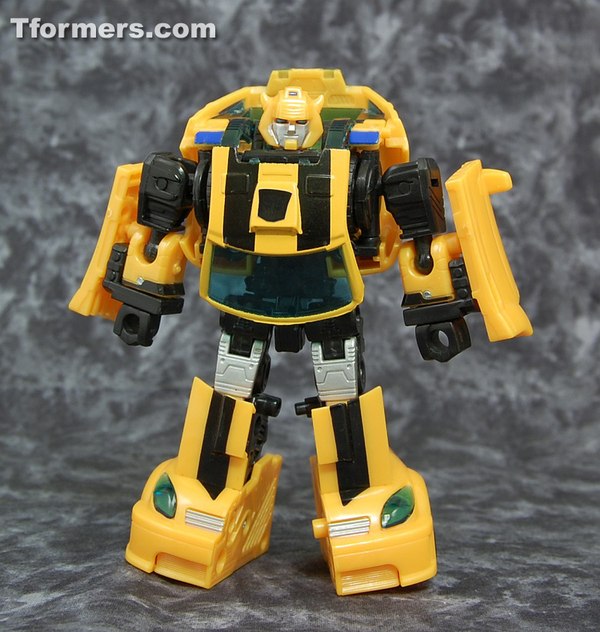 The head has some light side-to-side tilt, but can tilt back until Bumblebee's looking straight up due to the requirements of transformation. You'll have to tilt it a bit to swivel it in a full circle, as otherwise it collides with his shoulders. The arms have to be angled slightly for the shoulders to swivel a full 360 degrees, but not by much. The arms can swing straight out to the sides, which is about the maximum you can get from such a ball-joint. The forearm is ball-jointed too, and it bends to a solid 90 degrees and swivels freely in poses where it doesn't intersect the torso. The wrists seem as though they should move but they don't. While Bumblebee doesn't come with any handheld weapons, he can use anything with the long-running standard 5mm peg. (My personal favorite is Armada Sideswipe's pistol.) The hips have great front-to-back range, and moderate range swinging out to the sides. The knees do alright, but not great; probably less than a 90 degree angle when fully flexed. There's a swivel just below the knee of minimal use. But the best thing about the legs is that Bumblebee has gigantic feet which make it harder to knock him over than it is to get him to stand up.

Because Bumblebee was intentionally designed to be smaller than his contemporaries, the rest of his mass was made up with a nifty accessory: a Wave Crusher on a trailer that itself transforms to become a jetpack for Bumblebee in Robot Mode. Nice! It clips to his back pretty securely in Robot Mode, stays on the trailer hitch pretty well in Vehicle Mode, and the transformation is not difficult at all. The wheels face forward to look like jet engines, which is a cute touch. 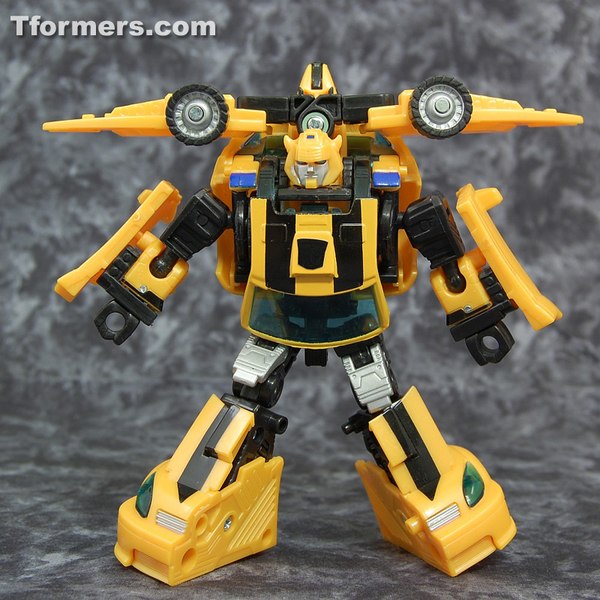 This is probably where the newfound lack of silver hurts the mold most; the trailer is the same color as Bumblebee himself, and the Wave Crusher atop the trailer is only partially painted so it blends in too. This also means the jetpack blends into Bumblebee's body a bit in Robot Mode. (...I accidentally typed 'blands' rather than 'blends' initially. Either one is pretty much correct.) So if you have the Classics Bumblebee as well like I do, I'd use that trailer, honestly. 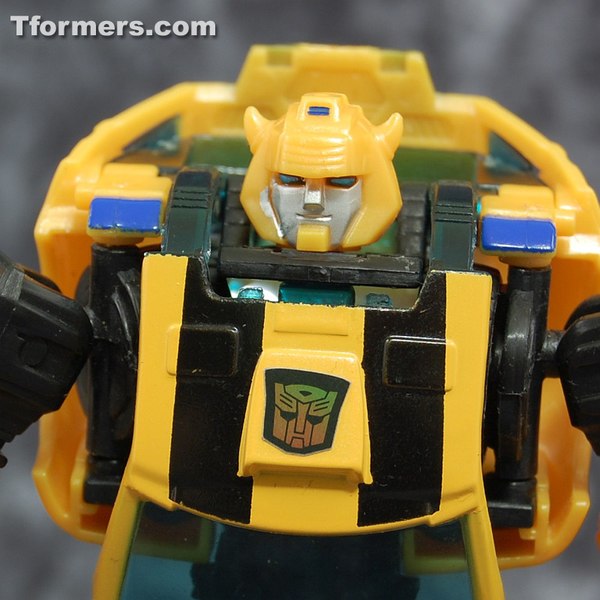 He doesn't have the best articulation of the Class(ics) of 2006- an honor which goes to Mirage -but he's the best balanced, and I'm not just talking about the feet. He's got my favorite transformation of the lot, he's up there with the best looking, and the accessory is a clever way to sell you a smaller toy without making you feel (ahem) shorted. And in this incarnation, he has a much better paint job, except for the Wave Crusher. 2010 was the year that G1-inspired Transformers began to inch back towards the highs of Classics, so Bumblebee fit in quite nicely. He rates a solid Very Good on the Figurereviews.com Non-Numeric Rating Scale.