Bulkhead means well, but being destructive is his nature. Everywhere he goes, he manages to crush something delicate under his huge feet. Of course, when turns his destructive nature on the Decepticons, it's all over for the evil robots.

I was pretty happy to see Bulkhead as part of Transformers Prime. Excluding the Vehicons, he's the only character from the premiere of the series who isn't G1 Warmed Over. He's still the only Autobot not derived from G1. Honestly I thought the Animated characterization was a little bit more nuanced, but I like this Bulkhead pretty well. He's pretty much still, as the commercial for the Prime toyline describes him, "The Heavy."

Really, that's what they call him. The Heavy. I wonder how he feels about Sandviches.

If you want a Bulkhead figure, your options are somewhat limited as of this writing: you can import the First Edition Voyager-class Bulkhead from Canada or Japan and pay through the nose, you can wait out the new Voyager with the big light-up weapon that takes up so much real estate in the package that I shudder to think how tiny the figure's going to be, or you can get the Cyberverse Commander Bulkhead. Since I was already waist-deep in Cyberverse, you can guess which way I jumped.

Unfortunately, the cheapest and most commonly available Bulkhead is also the most off-model. His build is distinctly less stubby-legged; the legs are still pretty short for his size but not as short. (It's slightly weird that his kneecap armor falls pretty far below the knee joint, but oh well.) The torso, besides having a lot of clear plastic light-piping that the CGI doesn't (which is par for the course with Cyberverse Commanders), doesn't match the show design at all. And I understand why it can't at this size and on this budget, but it's really one of the least show-accurate Cyberverse figures yet. What's really weird is when you realize that you can see both the actual vehicle bumper around where his stomach should be, and then see the faux-bumper molded into his hips directly beneath that. Funky. But what bothers me most are the arms. They're set far too far out from his body, and the shoulder armor has the choice of being at one of two bad angles. The "correct" transformation has them standing straight out to the sides as is pretty typical for Transformers. Or you can fold them down, where they snap to the upper arms, and they're closer to Bulkhead's traditional stoop-shouldered silhouette. Still not quite right, but I feel he looks a lot better this way. The tires over his shoulders also stick up way too far when transformed as directed- they look more correct folded down. The head, on the other hand, looks pretty nice. Bulkhead gets painted optics, and his likeness with its distinctive Gutsman jaw is spot-on. 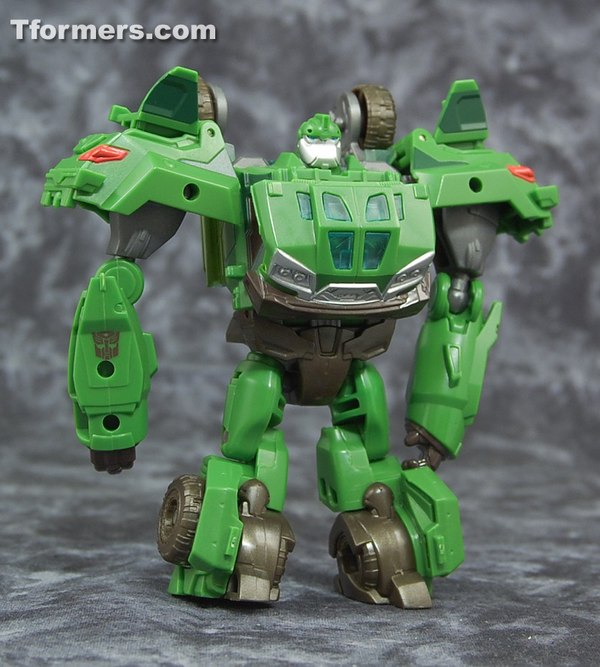 Technically he's supposed to have a swivel neck, but since his neck's both very thick and set into the body, it doesn't move. The shoulders swivel fine, but don't move out to the sides very far- they actually go farther with the armor folded down and mistransformed. What the folded-down shoulders do obstruct is elbow range, which is otherwise really great and folds to a tight V on a single ball-joint. So score one for keeping the shoulders up! The wrists don't swivel, but the hands work fine for 3mm weapons, and there are hardpoints all up and down his arms for them as well. No waist either, but again that's typical for this scale. The hips are great, with the most range possible in any direction: legs straight ahead, straight back, or straight out to the sides. The knees are too far up on the stubby little legs to do a lot of good, sadly. And since he is The Heavy, he has kind of smallish feet to sell that top-heavy shape. He balances alright on them in most poses, but not as securely as Optimus Prime does.

Like fellow Commander Optimus Prime, it's clever but not taxing. His torso unfolds a bit and becomes the front of the truck along with his legs, and then the shoulder armor becomes the entirety of the back end as the arms tuck under. The return trip's just as easy. The one thing I do like is how the hood of the truck plugs into the roof to form the chest; the socket becomes another 3mm socket once you're back in Vehicle Mode. 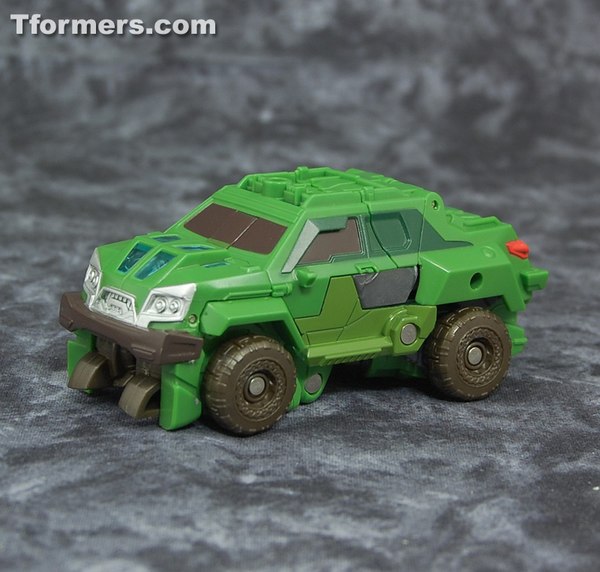 Bulkhead is a heavily armored monster truck/SUV/thing. I have seen SUV/Truck mixes in real life and they tend to look like absurd cartoonish caricatures of real vehicles, so good call for Bulkhead's alt-mode! It's covered with rails and techish-looking details, so it doesn't look much like a civilian vehicle. Which works out since it's drawing inspiration from Animated's made-up armored assault vehicle. It's not the most attractive of the Cyberverse vehicles, with the gunmetal grey shoulder joints standing out on the sidepanels along with some olive drab paint which most definitely does NOT match the green of the rest of the vehicle. Unpainted windows also make a return from the Legion size-class here, which is kind of a shame. The other thing that mars the appearance somewhat is the volume of robot parts that show beneath the truck. big chunks of the arms and legs are visible underneath, and in most cases it's hard to write them off as part of the truck. Only three 3mm sockets in this mode either: one on each of the back bumpers, and one on the roof. And let's face it, a plastic mace on any of those makes as much sense as... well, as a sword on the roof of an ambulance.

A small, clear blue plastic mace that's designed to fit to the socket in Bulkhead's wrist. To combat the relative plainness of the weapon- guns and swords are both more exciting than a lump of blue plastic, let's face facts -it has a variety of 3mm pegs and sockets all over it. So it's at least versatile in connecting to other weapons! And it fits snugly on Bulkhead's arm, and is a fair approximation of what the weapon looks like in the show. So it's decent, all told. 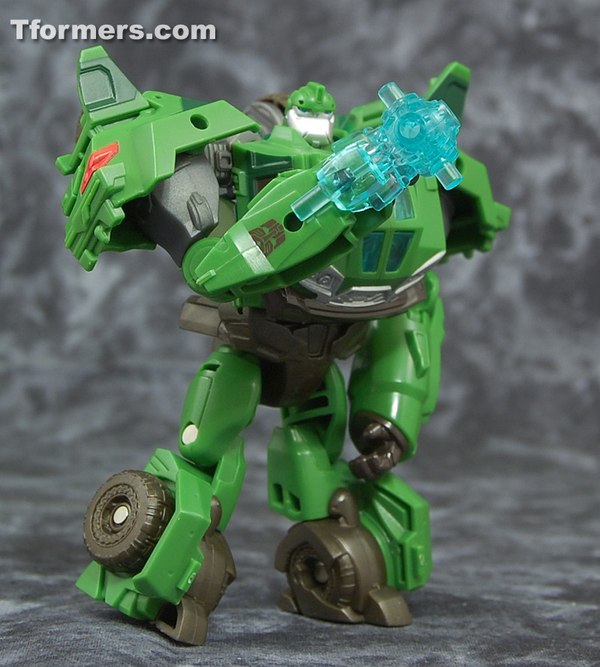 As I mentioned in the Cyberverse Commander Optimus Prime review, all the Commanders come with a mini-DVD of "Masters and Students," which is a decent episode but not great. It's not the best choice for this assortment either, as Bulkhead has little to do in the episode and Megatron spends the entirety of it comatose. That's another vote for character-specific DVDs with these- make it happen for Wave 2, Hasbro! 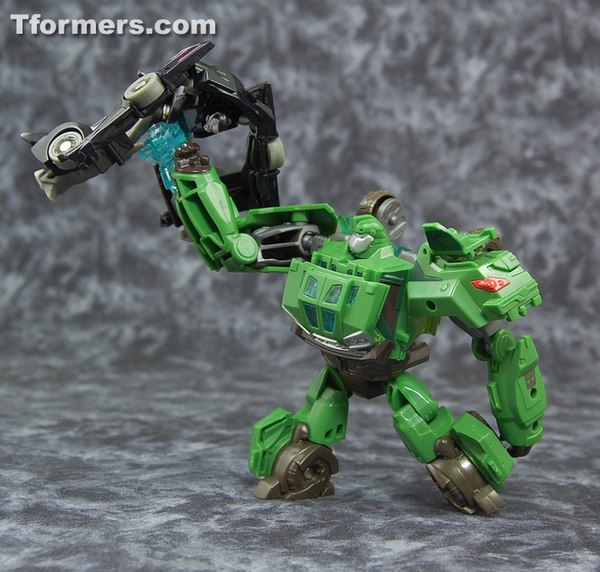 Bulkhead is sadly my least favorite Commander so far, and low on the Cyberverse list altogether. He's not underarticulated, but he doesn't look a lot like himself in terms of proportions or details as a robot. As a vehicle he has a lot of junk slung on his undercarriage. I'm not comfortable rating him as Could Have Been Better, because at this price and scale I'm not sure he could be any better. But he's really just sort of adequate, so he gets a rating of Good on the Figurereviews.com Non-Numeric Rating Scale.