More Than Meets The Eye issue #4 hits the fans tomorrow… I mean hits the stands tomorrow at local comic shops everywhere, but either way it comes at you this time, its an absolute hit! And if you aren't picking up this well crafted story by James Roberts, you are missing out on one of the highlights of 2012! This series is more than just a bullet of images and words, it's an adventure that continues to pack a punch. Certainly for years to come! 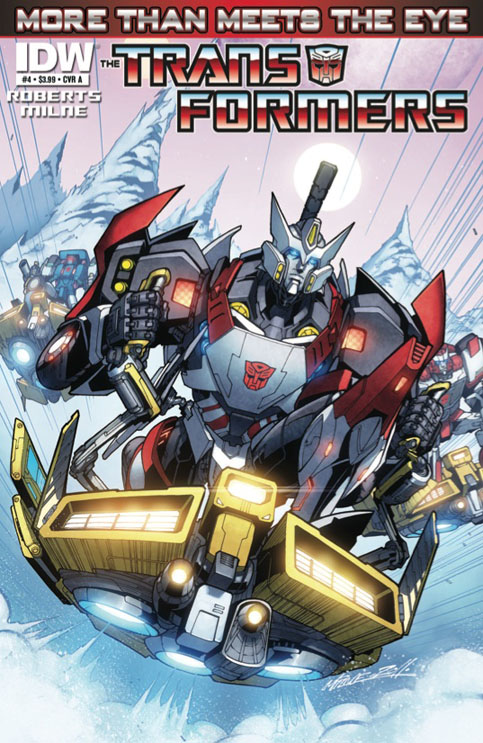 Transformers that SKI! Best comic EVER!


The issue starts up the next story arc in the MTMTE run. Last issue we wrapped up the Spark Eater Incident. This issue we get Roberts continuity! (That is more puzzle pieces to flesh out all the bits of story we've received from this invested writer!) But do you need to have read all that to enjoy this issue? Not in the slightest. Surely you will get another layer of story if you do read it, but it's not required to understand the story. But it makes sense that if this is your first read of Roberts you can very well find more of it that will only increase your understanding of the characters he builds in whatever issue you decide to jump in on.

Appropriately titled "Life After the Big Bang," this issue focuses on a mystery. First Aid sends out a call via datalog and the Lost Light's Chief Medical Officer Ratchet receives the message and decides it may be time for a house call as bots are crying themselves to death on Delphi! Upon arriving he, Pipes, and Drift get caught in a deadly game of disease exposure as Delphi has been locked down from a virus that resembles red rust. So far no cure. And so far everyone who show signs of infection have died. Things look pretty grim as their group start to show signs of exposure. But it's the least of their worries as Decepticons may be involved? Something called the D.J.D (Decepticon Justice Division) as Delphi lies within it's boarders. But that's not the only conflict here… back on the Lost Light, Tailgate last issue announced that he planned to join the Decepticon faction. This issue brings up the question, "what does Ultra Magnus intend to do about it?" With some pretty interesting results! 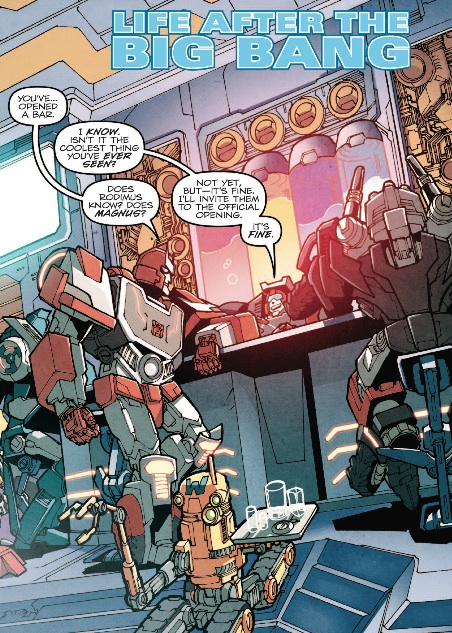 It's Miller time! Especially if Wall-E is serving!


This issue could be a two part story. (I'll be able to say for sure next month when I get my hands on that issue.) But it's safe for me to say you won't get all the answers in #4, but you get a well told beginning that leaves you hanging for the next issue where answers await? (And I'm assuming those answers will come if anyone on Delphi survive!) James appears to be weaving in and out of plot and subplot leading us along to a conflict that has yet to be revealed. I definitely feel a sense that this is a well plotted story going somewhere and the ones to ride this story wave will continue to be rewarded. (But you have to jump on if you want to see those unravel!)

There are continued character moments which build comedy and interest in what the characters are doing. They all exude personality! Several favorites all get screen time in this comic if they don't get speaking lines. There are definite nods to previous stories Robert's has written, but we also get a few other tidbits, even an appearance of Bob, who first appeared in Costa's Ongoing issue 20. The conflicts are both joyful and intense. And again the story package includes world building and political opinions about prejudices surrounding the new state of Cybertronian life. And lastly the return of a character we haven't seen for almost two years in IDW continuity!

I don't make house calls but I'll make an exception for this!


#4 is drawn by Alex Milne and colored by Josh Burcham. Milne has filled this comic well. For all the story that is in this comic you'd think it would easily feel crowded yet I don't feel that at all. In fact, the comic ended it seemed before I knew it. The story telling in both the foreground and background reads well. And the coloring works well to pull off the grim results of seeing what happens when a Bot gets a bad case of red rust. (Ew.) But in all, the coloring works well for this story. Burcham handles the detailed Milne's work well.

Issue #4 is a great issue. Highly recommend the series as a whole and definitely this issue. For all the love and effort going into making these comics I feel like I say about the same stuff every review. But when it's good, it's GOOD! And that says it all.