Release Data: Released with Spinister in a bagged souvenir set available for purchase exclusively at Botcon 2012 at a price of US$89.

Octopunch could have been a regular Botcon set toy for as lukewarm as its reception was when images of it leaked to the internet a couple months before the convention. Were it not for a fantastic 1988 colorscheme toy to come with it, I bet nobody would have bought a poor Octopunch at all. Funny thing is, if you actually see it in person, and stop to realize that the mold it's using is pretty solid, a level of appeal can develop that just won't convey itself so well in photographs. Especially blurry photographs taken hastily in a dimly lit room. I'll try to do a little bit better for you. At least aside from that bothersome green the air cushion skirt is cast in, which is much like eHobby United Kup in not photographing accurately. It's so hard to be a photographer some days, I'm telling you. 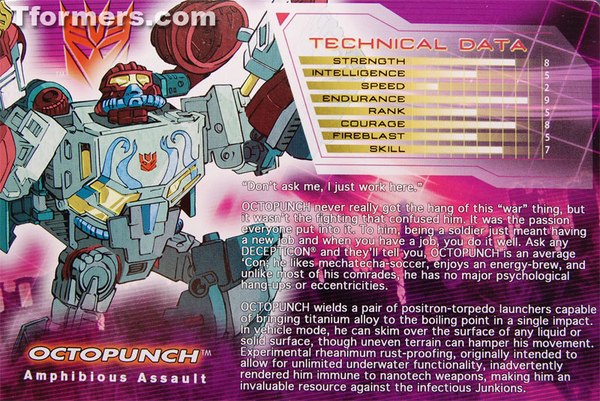 Of the three distinct colorschemes this mold has been released in so far (Seaspray and Deep Dive in addition to this use), Octopunch manages to clock in as the most vibrant and eye-catching. The colors are mostly adapted from the original toy's Pretender shell, though that will become a little more clear when the toy is in robot mode. Despite this, the colors all lay out in this mode really well with nothing jumbling up. There isn't as much special paint work such as SG Prime had to help accent the basic colors, but Octopunch has a good spread of color to help break up any large areas of solid color. Special details in this case are limited to the "ducks" on the roof. Though Lanny Lathem adamantly maintained that they are in fact tentacles during the TFCC panel, I think we all know the actual truth here. I'll talk a little more about these in robot mode. For now, whatever you choose to see them as, they are good at changing how you see the shape of the roof panel they cover. ...they also kind of make the front windows look more like eyes, which is maybe a little creepy. The one thing I might point at to complain about this deco is that the deck is just basic grey. I'm not sure how I might prefer to see it colored, but the grey just looks out of place to me among the variety of colors everything else is around it. And of course as a Shattered Glass Decepticon, he has a red insignia between the ducks. 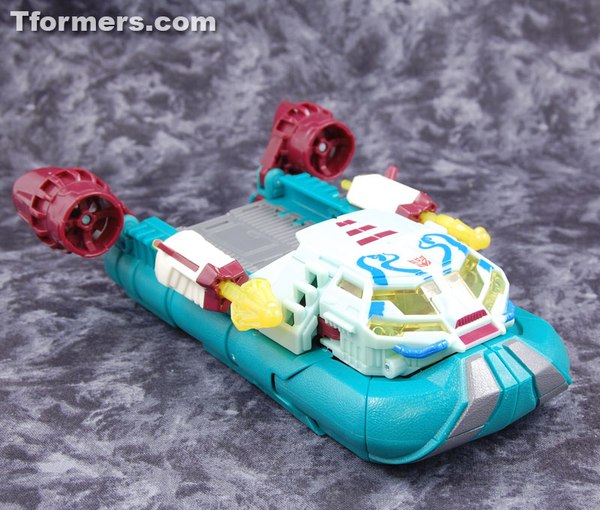 Happily, unlike SG Prime, I can't see any sign of parts fit or other tolerance problems as compared to the prior instance of this mold I have. Very importantly the air cushion skirt pegs and tabs together very solidly. Important, as that is effectively the backbone of the vehicle mode. Were it loose or unstable, it would be very difficult to work with the vehicle mode at all. Octopunch is easily the best match to the original uses of the mold in how the materials turned out among the four souvenir toys I purchased.

This is really the only place I can call out any difference in the plastic as compared to Deep Dive, and that's only where the back plate does not plug in as securely on Octopunch as it was on Deep Dive. And that's only the outer panel with that problem; the inside flap that is actually responsible for holding the robot mode together is perfectly tight and does its job with no problem at all. Otherwise there is nothing I can note about the transformation that wouldn't be true of any instance of this mold. Overall, the process is very quick, simple, and smooth.

So, I think this is where people have trouble connecting this toy to Octopunch. Except that it's a really close match to the G1 toy's shell colors. The thing is, media messed around with it and gave Octopunch a yellow "shirt" the toy never had, and so that's what many people expected of the deco. Though there could be more yellow on the arms for full accuracy, it basically matches the toy's appearance, and I'm okay with that. In robot mode, the tentacle-ducks fill in for some of the sculpted deco of breathing gear on the original Pretender shell, but as tentacles they're a poor substitute for the actual tentacles that existed on the Pretender shell. Unfortunately there is no antique diving helmet element for this mold, but the paint work kind of makes up and helps this to still look like an Octopunch head, just with more up to date gear. Though if you really have to have it, I'm told the Pretender toy's diving helmet can loosely fit over Botcon Octopunch's head. Ideally, I'd have liked the maroon and yellow on the forearms reversed in proportion, but that's probably impractical in mold layout and paint budget concerns. Even so, the deco works well enough for me, and I feel okay about having this stand with the other adapted Pretender characters we've had in the last couple of years. 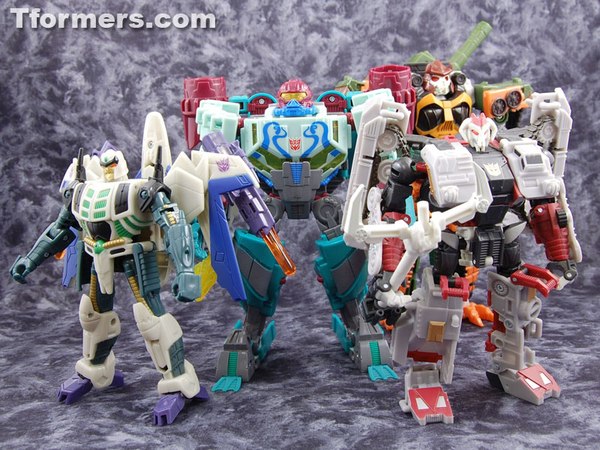 Like the vehicle mode, there's no particular differences to the build quality compared to prior instances. It's so similar in fact that Octopunch carries on a slightly loose hip ratchet that is also present on Deep Dive. Funny how something like that can be completely endemic to a mold that every iteration of it will have the same mechanical flaw. But as I said, it's a slight looseness, and standing or posing isn't really affected. Besides that, the only issue is the one I raised in regard to the transformation, where the one back panel doesn't tab in securely. But if you leave the backpack alone, it doesn't seem like you'll encounter any real trouble from it. Even adjusting the engines is safe as long as you don't try to push the past the shoulders or anything like that. 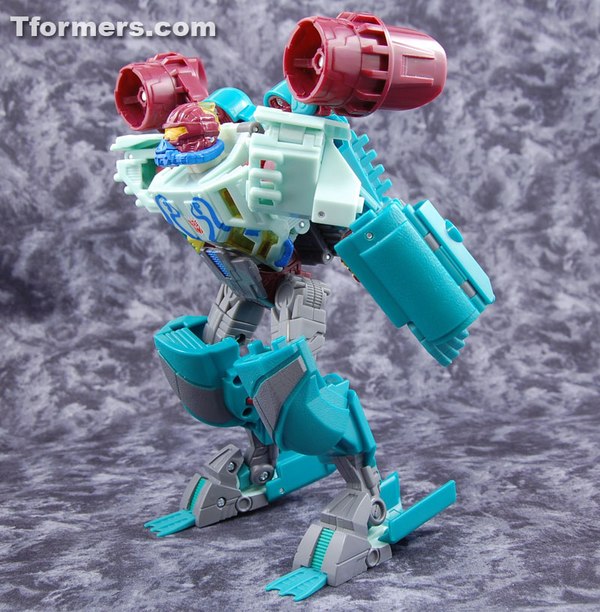 Octopunch comes with the same set of missiles and launchers Seaspray and Deep Dive had. The launchers can peg along the sides of the vehicle mode, and even stay in those hardpoints during transformation and rest on the underside of the forearms in robot mode. Or if you prefer they can be handheld as well. The launchers fire with a fair amount of force, though this being an expensive convention toy, I'm reluctant to try to test the full range of the projectiles.

The launchers are oddly the only use of simple white plastic that I can find on this toy - wait, no, the neck post is also white. But it's a very odd thing to me that those little parts would have their own special plastic color not found elsewhere. And truthfully, if any parts called for being yellow, I'd think it these, where it has no consequence for any other important elements of the toy. 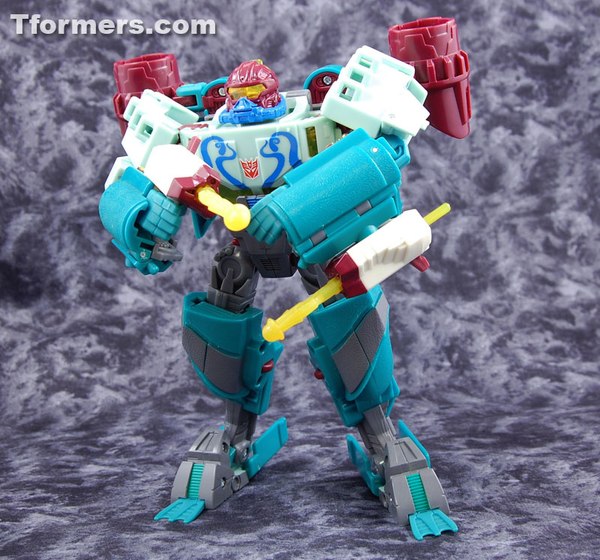 The reception for this of such general disinterest kind of confuses me at this point. Perhaps it was carry-over from the boxset reveals that were also not really thrilling for many people. But for myself, I find that the more I look at and consider what this toy is doing, it's growing on me more and more. While it originally was a means to an end, coming with a toy I really wanted and just being resale fodder later on, I really am considering keeping it, because it really does make a good Octopunch. The tentacle deco could probably have been more clearly defined so that it wouldn't be so ducks, but it's not really a strike against the toy, especially how it recreates design elements of the original toy. I can't truthfully say that a more Marvel Comics inspired deco wouldn't hold a stronger appeal to me, but I got to liking this a lot too when I realized what they were going for in the colors. That it's a Shattered Glass character is of little importance. The color of the faction logo doesn't matter to me, and if that's a problem for you, a Reprolabel can fix it real quick. Classics collectors shouldn't dismiss this too quickly, since this souvenir set can help plug two holes in your Decepticon ranks in one pass, and that might end up making this one a surprise winner in broad appeal. 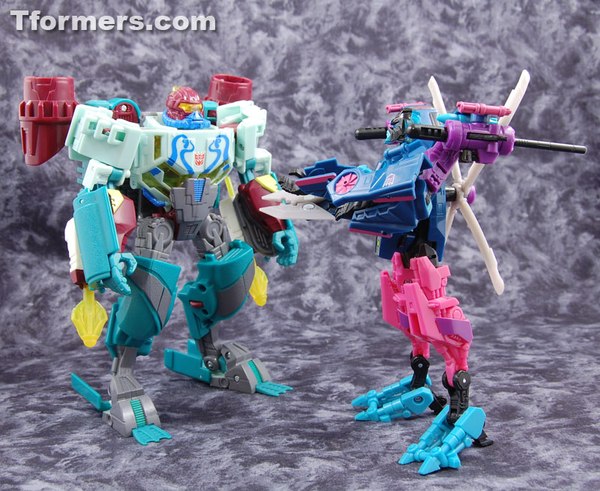 I'd rank Octopunch as Very Good on the Figurereviews.com Non-Numeric Rating Scale, and if someone could have told me this would be the case months ago, I don't think I would have believed it. This is honestly a kind of figure that I think requires actual first hand experience to appreciate what it has going on. If you buy the complete souvenir set to get Spinister, do yourself a favor and check this toy out a bit before you decide whether to resell it. You might find it's a lot cooler than you expected.