Great and Mighty Megatron has very nearly held victory in his hands countless times, but Optimus Prime has always stood in his way. Here, it ends. Here on Earth, Megatron swears he will finally leave the scrapped chassis of his enemy to rust.

Prime Megatron's design is actually quite nice. There's a clear lineage of modern Megatron designs leading back through War for Cybertron to Animated to the Movies, though honestly I'd lay a lot more of this Megatron's aesthetic at the feet of Derrick J. Wyatt's Cybertronian Megatron design than I would the films. I always had a hard time seeing the connection between those two designs anyway, because Wyatt's Megatron doesn't look like an unfortunate accident at a silverware factory. Regardless of the exact lineage, this is a good looking Megatron, and I'm really fond of the great flamingmetal eyebrows.

Megatron is the tallest Commander yet at 10.5 centimeters. Cyberverse Commanders are surprisingly good at scale- Optimus Prime's the tallest Autobot in Prime, but Megatron is indeed just a bit taller. He's got a clear purple torso with gray armor plates, and it looks really nice. Considering Megatron spent some quality time with Dark Energon the clear purple is probably the most appropriate use of clear plastic so far. My only complaint is that with no gray on the back it looks kind of like a Happy Meal toy at that angle. The body is very Animated in style with the exception of the extremely GeeWun-shaped lower legs and helmet. The helmet's interpretation of the original Megatron's head is pretty similar to the War for Cybertron take on Megatron, so there may be influence there too. Megatron gets his optics painted, and he needs them- he just would not look right without the eyes peeking out of that helmet. The shoulders are spiky, the most clearly movie-influenced part of the design- though there's also a bit of spiky flair on the lower arms and upper legs. The right arm's got all the interesting features: the Fusion Cannon and most of the mounting points for weapons are there. I like the Fusion Cannon design here, very compact- most of the Animated Megatron designs, especially the Cybertronian versions, suffered from the real-life physics of their oversized Cannons. The cannon itself has a 3mm peg and a socket for same, and the barrel of the cannon is also a 3mm socket. likewise there's a forward-pointing socket in the wrist for mounting the sword As Seen on TV. It's a good excecution of a good design, particularly at this scale and price. 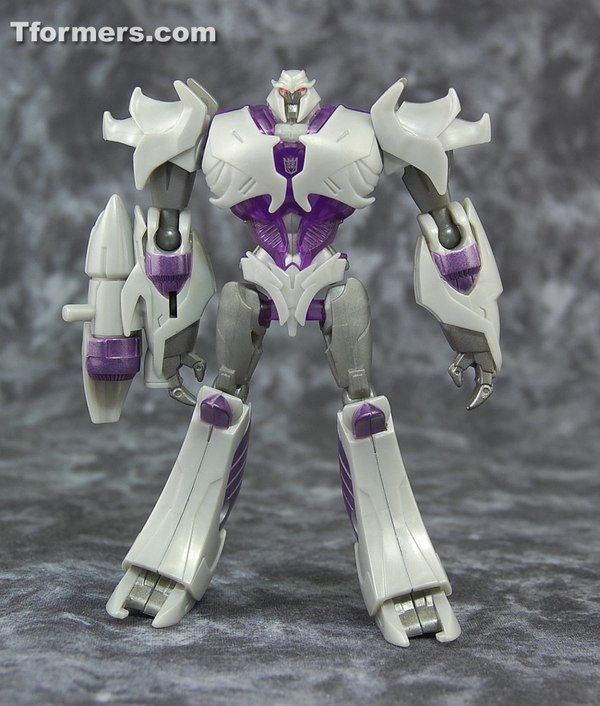 No head articulation, because the head's tiny to give the impression of bulk, and it's on a transforming joint. The shoulders swivel freely and the arms swing out to the sides with no problem. The elbows are ball-jointed and flex to a right angle as well as swiveling without issue. No waist, as is standard at this scale. The hips move front-to-back as much as the shape could possibly allow, but the points on the tops of the legs obstruct lateral movement. The knees get about a solid 90-degree bend, but as with most Prime character designs they fall too far up on the leg for optimal use. His feet are big enough to allow for pretty stable and varied posing.

It's a really weird and interesting transformation scheme: The torso splits front-to-back and unfolds, and the gray part of the chest swings down around the lower torso armor to become the nose of the jet. I can't express why I think that's so neat, but it really is a captivating feature. The arms fold back to become the back end of the jet, and the legs twist around and fold into the wings of the jet. Everything locks down fairly snugly too- the toes hook into the torso and the arms lock down to the back of the torso. It's not complex, but it's pretty involving- again, especially at this price point. 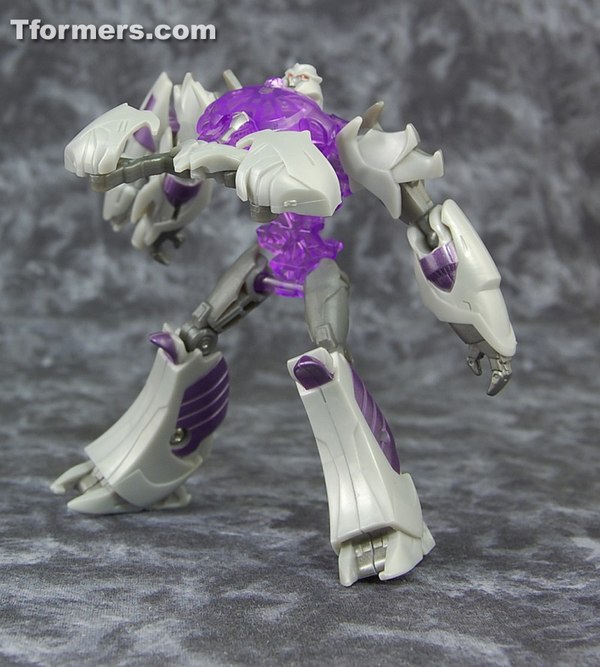 We're going with the "Megatron needs no disguise!" angle from the movies, and that's fine with me. This is the third attempt at a Cybertronian jet design for Megatron, the previous two being the first movie and Animated. This one's the best of the three, in my opinion- it doesn't look like postmodern sculpture, and you can actually tell which end is the front- the best of both worlds! ...also, is it just me, or does it look kind of like a Ferengi starship?

Naturally it's a bit off-model since there's no way to make his lower legs that thin. His head also sticks up completely- in the CGI model his eyes and eyebrows are fully visible, but here it's the whole head. Kind of G1 Scourge-like when you get down to it. Considering how many liberties the animation takes with Megatron's mass, the figure does a pretty respectable job of replicating the design. The package art shows the central part of the torso painted silver, and that would've helped the resemblence even more. It's kind of a fragile appearance, though- from some angles it looks like an entirely plausible space-jet, and from others a gigantic heap of twisted robot parts. 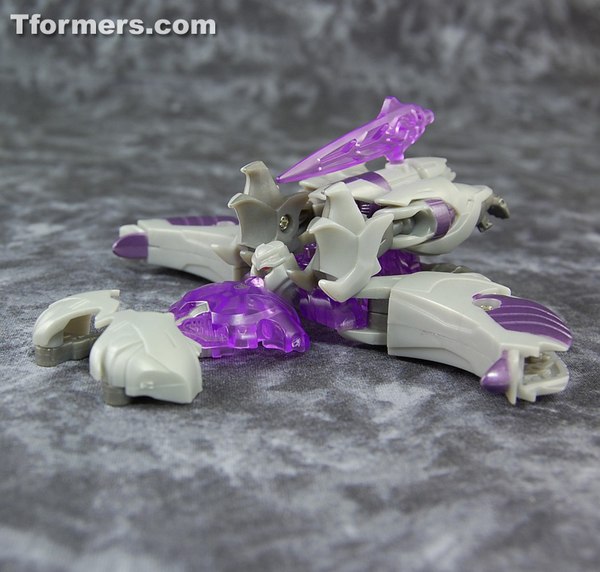 There's only a few 3mm ports available in this mode, and most of them in largely impractical places- the most accessible one is on top of the Fusion Cannon, where the package advises you to stow the sword. There's no better place I can intuit, so if you've got to have it on there, that's the best spot.

It's a clear purple plastic sword that takes some cues from the Animated Megatron's swords, as well as a little bit of Energon Megatron if I'm not mistaken. It's designed to plug into Megatron's right forearm as seen in the series, but of course can also be held like a sword or plugged into any of the other 3mm sockets on Megatron or any other Cyberverse figure. It's also got a socket of its own, which seems to be designed to allow Megatron to stow the sword on his back when it's not in use. Like most of the Cyberverse weapons, it does a fair job of replicating the built-in weapons of the Prime Transformers while maintaining the nifty Cyberverse stackable and interchangeable play pattern. 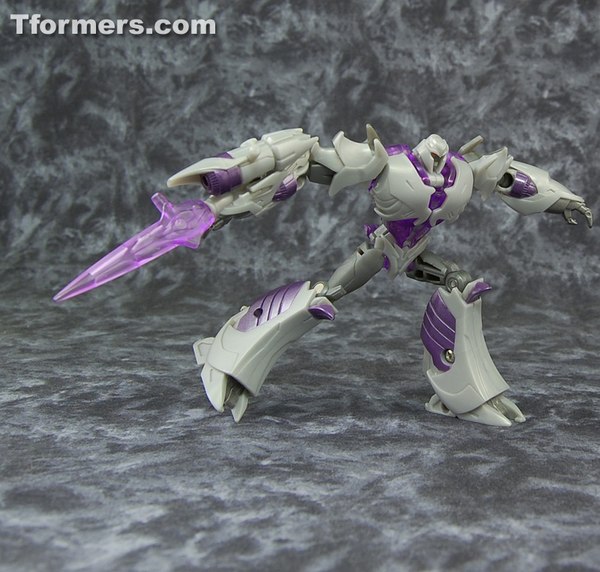 Still "Masters and Students." Which I learned today was also the pack-in for the Prime Entertainment Pack you'll probably never see in stores as well. Hasbro obviously thinks a lot of it. I think it's just okay. I assume it was chosen because it's the first regular episode of the series, but it'd have been smarter to go with the best episode. Off the top of my head I couldn't tell you which episode that is. But I don't think it's "Masters and Students."

Megatron rates Excellent on the Figurereviews.com Non-Numeric Rating Scale. It's one of the best-looking, best-posing, niftiest-to-transform figures at this scale. The Jet Mode is a little bit pile-of-partsish at some angles, but it's still a unique and appealing figure. 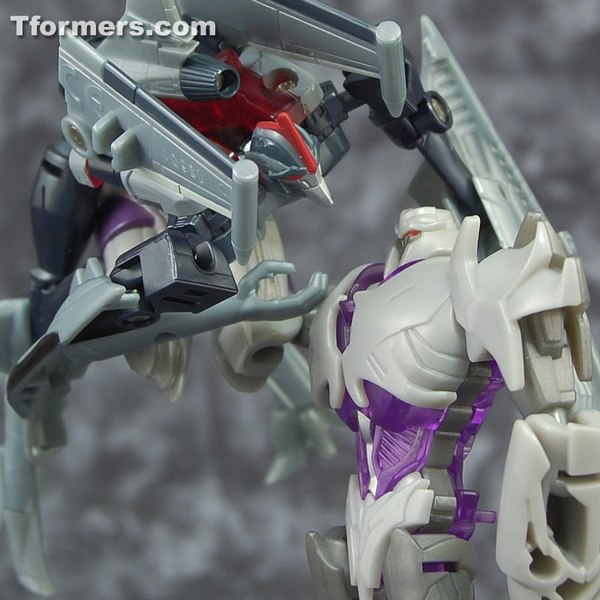