Arcee is fast, smart, and always ready for a fight. Her blasters might not pack the punch of the bigger Autobots', but her incredible fighting skills more than make up for anything she lacks in firepower.

...well, that explains why she borrowed Bumblebee's blaster here.

Arcee was the last of the Wave 1 Legion figures I needed, and I just plain lucked into the last one at TRU. (Another nice thing I've discovered about Legion is that TRU's markup isn't quite so painful at this scale- it's generally a dollar or less.) I like Arcee; she's probably the best delineated Autobot so far in Prime, with the most explored backstory... and the most baggage. But this is a war story, and the two go hand in hand. Based on accuracy to the on-screen model, Arcee was my first Deluxe purchase- but I'm going to be as fair as possible in my comparisons here, because this figure has to do most of the same things at nearly a third of the cost and space involved.

Arcee's one of the better likenesses at this scale. Her extremely broad-set and heavy shoulders are an inevitablity of the jointing, so proportionally she's not going to look as much like her CGI model as the RID Deluxe, obviously. On the positive side, I'm suspecting that her smaller frame may have freed up some budget for paint. She's a darker, deeper blue than the RID Deluxe, and one that probably matches her onscreen appearance better. She's got plenty enough silver to avoid looking blah in that Bumblebee way, but as with the Deluxe her metallic pink paint is absent. I'd have been downright shocked if the Legion toy had it when that one didn't. Of particular note here, paint-wise, is her face, which is both painted nicely for its scale and actually has optics painted-in unlike some figures of this size. (Looking at you, Ratchet- even though I know you can't look back.) There's even an Autobot emblem on the chest, which the Deluxe didn't put in anywhere on the figure. 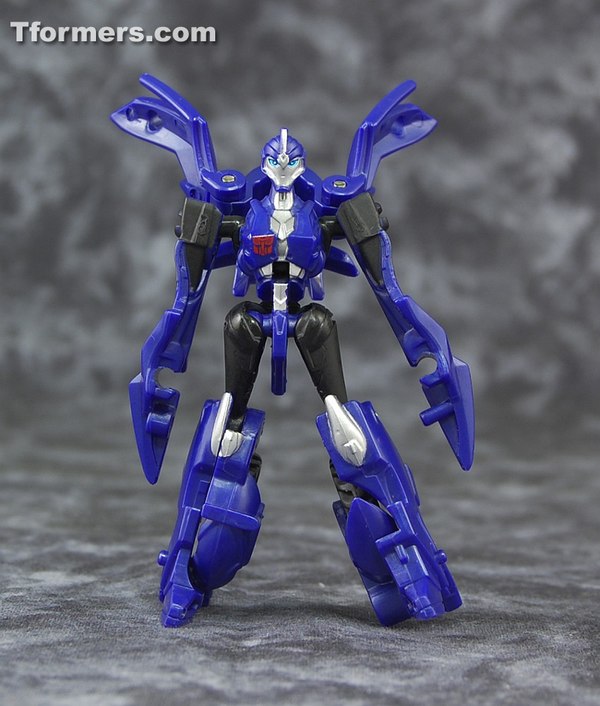 The other comparison that I do feel is worth bringing up to the RID Deluxe is that the back-kibble is nearly identical, except without the wheel hanging there. But you've still got the nose of the bike and the "wings" formed from sidepanels. I like the wings- the lack of them on the First Edition Deluxe is one of the things that led me to purchase the RID version instead. The wheels are both in the backs of the legs now, and before you get concerned with your toy being damaged as I did, you should know that the "chip" out of one of her kneecaps is an intentional notch left for transformation purposes. As with a lot of Legion toys the arms are the least convincing part of the toy, but with Arcee it's actually a bit worse because they're under the seat piece for the motorcycle mode, so they curve the arm in a way that would look broken (or at minimum painfully dislocated) on a human. On the upside, the curved edge of the seat piece comes to a point in front of her arms, so if you want to treat those as the forearm-blades in the animation, go for it!

As usual, no neck articulation here in Legion Land. The arms do great: they swivel freely (once you negotiate around the wings) and swing out laterally to well over Arcee's head. The hips are excellent for a ball-joint, with as much front, back and side movement as you could possibly get. The knees get 90 degrees of flex but could in fact go farther without the wheels being there. She's also got nice, broad feet which provide the balance that the hips and knees demand. I'm also happy to note that she doesn't have the silly pointy-toed "shoes" that I wasn't fond of in the animation and Deluxe designs! Finally, Arcee doesn't have as many hardpoints for 3mm-peg weapons as some Legion figures do: she's got her fists, and her wings. I may have to borrow Bumblebee's gun and install a pair on the wings just because.

It's simple, but since she's not car-shaped it's a good deal more interesting than a lot of the others. You swing the back-kibble up to cover her head, swing her shoulders down and swing her arms around to form the seat, fold up the legs and swing one wheel towards each end of the bike which is, presto!, now a bike. ...well, once you've folded the wings into motorcycle sidepanels. For a Legion figure, this is a reasonably impressive transformation. 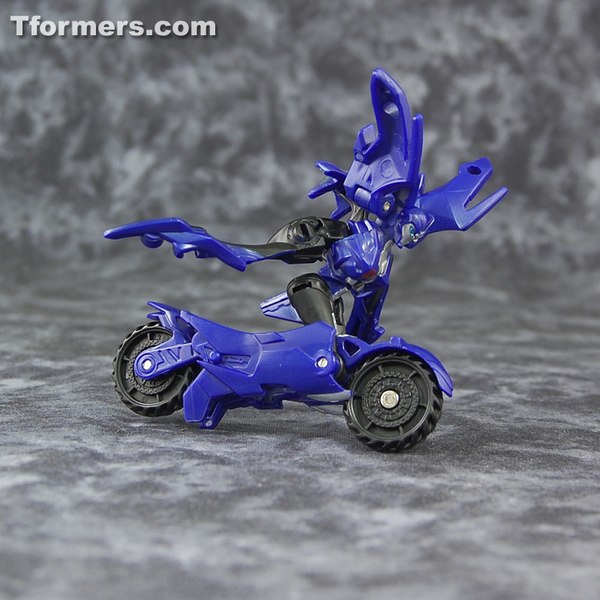 It's a blue motorcycle, of course. A fairly good-looking one at that, with no obvious robot pieces hanging off of it. If I'm not mistaken she might be in scale with the Basic Human Alliance drivers, but at the moment I can't test this. What she's definitely out of scale with are the other Legion Autobots, since she's just as long as a motorcycle as they are as cars and ambulances. Compared to the RID Deluxe it has different color problems that explain why the blue was lightened on that figure: the blue is so dark as to blend with the black and make nearly the entire bike look monochrome. On the upside, the windshield and headlights have been painted silver, so they don't vanish into the bike as badly here! It also doesn't roll as well as the bigger figure, but I suspect that's because it was designed to sit up on its own, with a kickstand being unfeasible at this size. Again, since that makes my life as a photographer a bit easier, I appreciate this. 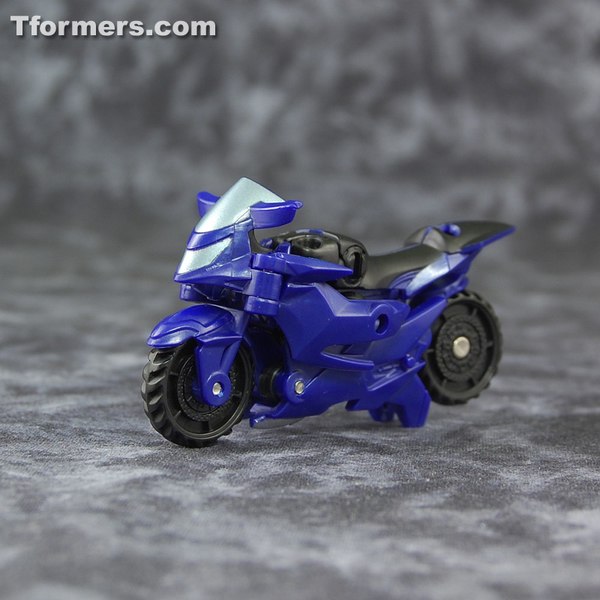 Arcee has... let's say 3.5 hardpoints in this mode. The ones on her wings are now on the bike's cladding and in a more accessible place, but her hands as part of the seat of the bike become a pair of sockets so close together that only one is usable at a time, and centering the gun on the back of the bike is impossible. (Not that it matters much unless she was firing at something chasing her, else she'd blow of her own windshield.) I guess it's to be expected considering that there are a lot less broad, flat surfaces on a motorcycle to put 3mm sockets on, but a centered one might've been nice.

It's the same gun that comes with Bumblebee, which is disappointing. One of the things I liked about Bumblebee and Ratchet's weapons is that they resembled the CGI's built-in transforming weapons very strongly, but this gun looks nothing like Arcee's blaster or blades. The upside is that you can give it to Bumblebee, who will then have two weapons. But of course that leaves Arcee pretending that the edges of her seat-arms are blades. A pity. 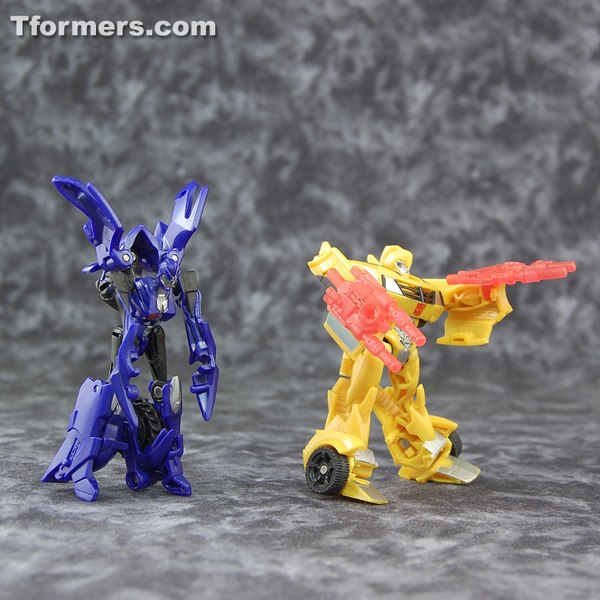 Arcee is Very Good on the Figurereviews.com Non-Numeric Rating Scale. She's well-engineered for her size and looks decent in both modes, and poses well, and if it weren't for her coming with an extra accessory for Bumblebee, I'd probably rate her as Excellent. Even with an off-model gun, she's well worth owning if you're looking to complete Team Prime in Legion scale. 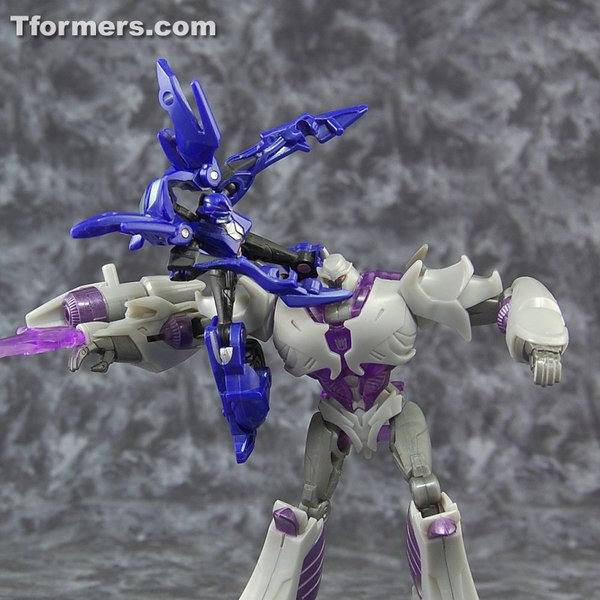