The best place to find Cliffjumper is wherever there's likely to be a fight. The tough, aggressive robot loves nothing more than pounding Decepticons into scrap.

Cliffjumper - what a great fakeout! And yet at the same time, once you saw the beginning of Darkness Rising it all made perfect sense: how could they afford The Rock for every episode? Answer: they can't. They can afford him for part of one. But after featuring him heavily in all the pre-release materials, it was a cute touch to kill him off in the first five minutes. Despite all this, he was actually low on my want list of Prime characters. I like The Rock well enough, and I like a Cliffjumper that's not a Bumblebee recolor well enough, but somehow it wasn't... enough. So I saved him for last.

So naturally I hear that he's turned out to be the best articulated figure in all of the Prime Legion class. But, let's see about that.

What he's not, though, is remotely close to a match for the CGI. On the show Cliffjumper had a lot more in the way of rounded surfaces that weren't immediately recognizeable as car parts, but here he's pretty G1-shaped. Maybe as late as Cybertron- we still got fairly simple and blocky Robot Modes that late. And I like the look- the car-hood parts on the shoulders make him look good and beefy. But, yeah: he's got a token stripe on his chest to ape how the CGI model's car roof folds up when he transforms, but that and the head are as close as we get. It's a pretty good head, and he too gets painted optics- did I just get a bad Ratchet, or something? And his paint is otherwise nice- thanks to the two-tone limbs he too avoids the monochromatic look of Legion Bumblebee. Other than his hands, he has a pair of 3mm sockets in this form- one on each of his ankles. Useful! 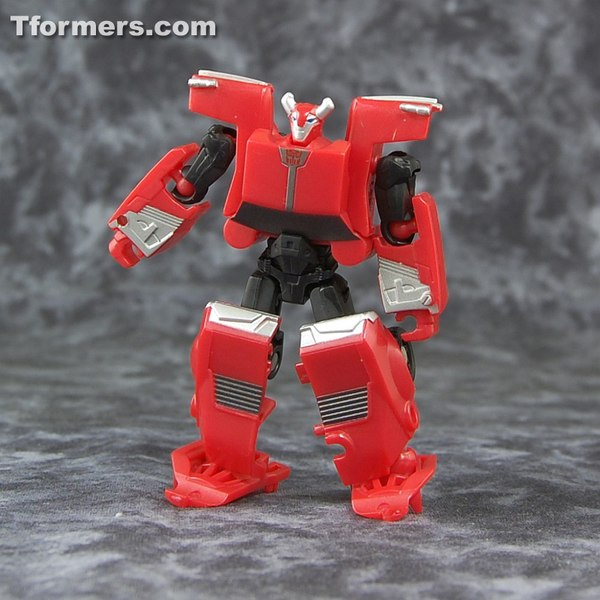 So, here's the thing: just going by the metric of articulation locations, he truly is the most articulated thing in his class. But in practice he has a key limitation that I'll get to as I go down the list. His shoulders swing out to the side as far as possible, and swivel as far as the shoulders will allow. He even has elbows, a first for what I've purchased in this line! They flex to a 90-degree angle, and swivel inward. They can't swivel outward because the ball-joint is set into the side of the forearm instead of straight up and down. A bit limited, but way better than nothing. Now there's the problem: the hips. The shape of the thighs butt up against the hips themselves, so any attempt to move the ball-joint straight ahead will just push the leg off of the joint. I've tried moving the leg out to the side- where it has great range -then forward, and the result is the same. The legs do not move forward, period. Which is a pity, as you can barely see the thighs for the rest of the leg, and so the flared shape being one of the toy's few attempts to be on-model is not just pointless but hobbling. And the rest of the legs are great for the scale: he has knees that fold over on themselves perfectly, which makes sense seeing as they're transformation joints. And he even has ankles! His feet are formed from the doors of the Vehicle Mode, and are mounted on ball-joints. He could do all kinds of great poses if he could just move his blasted legs! As it is he can do some, but nothing truly spectacular. Once I've gotten photos, I may trim the thighs down in the hopes of making the hip joints viable again. 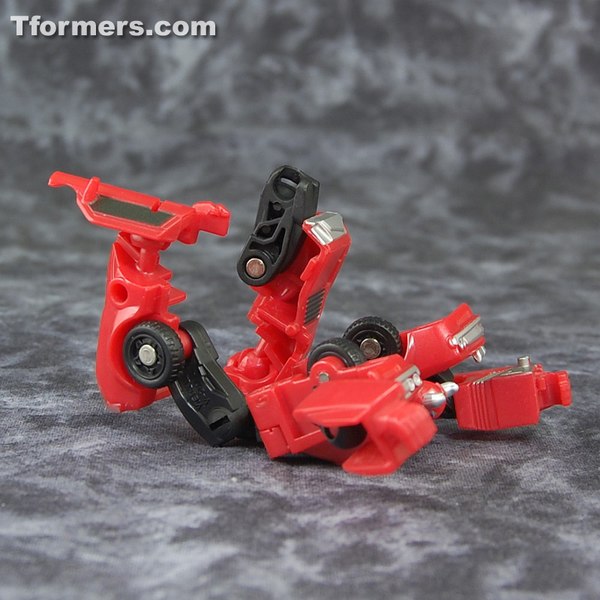 It's actually pretty neat- I could see the basic scheme being put to good use on a Deluxe. The arms fold into the shoulders, and the legs fold into the back end of the car. The hips then fold under and the shoulders swing down to wrap around the opposite sides of the torso from where they were just moments ago. I like that quite a bit! 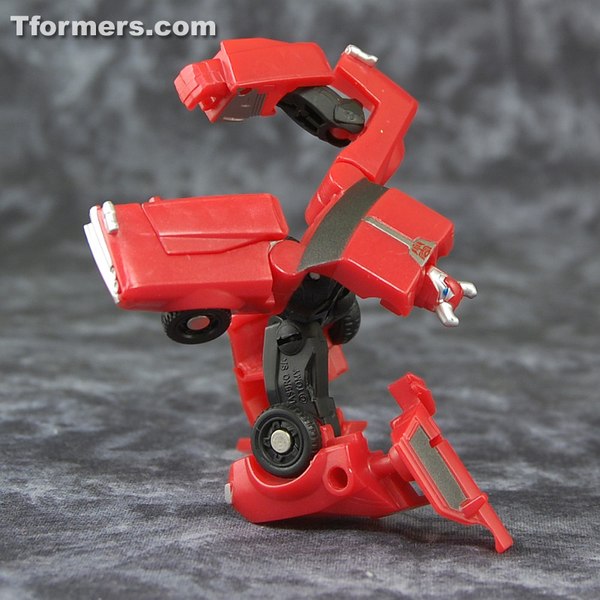 It's a very `70s looking muscle car. Not my favorite era or school of car design, but it's distinctive when put up against any of the other automotive Legion Transformers. And he seems to be largely on-model, though the number of seams you end up with on the hood of the car from the unique transformation scheme look a bit (ahem) unseemly. His front and side windows are an attractive dark metallic gray, even too dark to really call "gunmetal" unlike the shade on the rear window. He's got a couple unpainted windows, but they're very small and fall across a transformation seam, so it's understandable. Most importantly, he has his trademark horns for a hood ornament. They're not sculpted very sharply, but both the scale and the age recommendation prevent it, so it's neither a surprise nor a disappointment for me. I wish a little bit of silver had been expended on painting the tailpipes, but I can kind of understand why it wasn't at this scale. The car rolls well, and you've got one centered hardpoint on the roof for 3mm weapons as well as one by each rear fender. The toy doesn't do much, if anything, wrong in this mode. 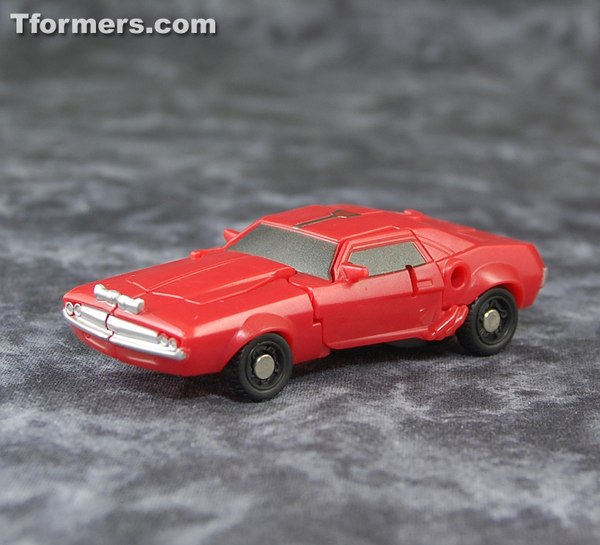 Like Arcee, Cliffjumper comes with a rerun weapon: Ratchet's battle blade. Like I've said before, this is really nice if you want Ratchet to have two swords, but not so great for Cliffjumper. Unlike with Arcee, there's nothing in the sculpt you can pretend is a three-barreled blaster of the type he used in the series, so Cliffjumper is (ahem) dead in the water. With the really nice sculpts done for Ratchet and Bumblebee, it's a little bit sad that they chose to go cheap for the others. Though I can understand the rationale since The Girl and The Dead Guy are the ones who get stuck with the repeat weapons. 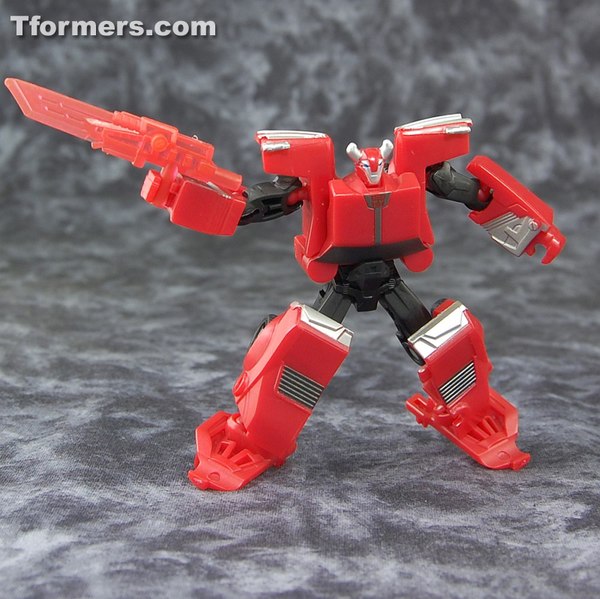 It's really difficult to rate this one. If the hips worked as intended, I could probably see past the weapon thing to rate the figure as Excellent on the Figurereviews.com Non-Numeric Rating Scale. On a figure with less articulation overall, relative to its class, I'd be tempted to go with Could Have Been Better. But there's a bunch of other neat things about Cliffjumper, and the elbows and ankles do improve things even with the hips taken into account. So I'm settling on Good. If a Legion figure comes along with this kind of articulation and no hip problems, it will be undeniably Excellent. 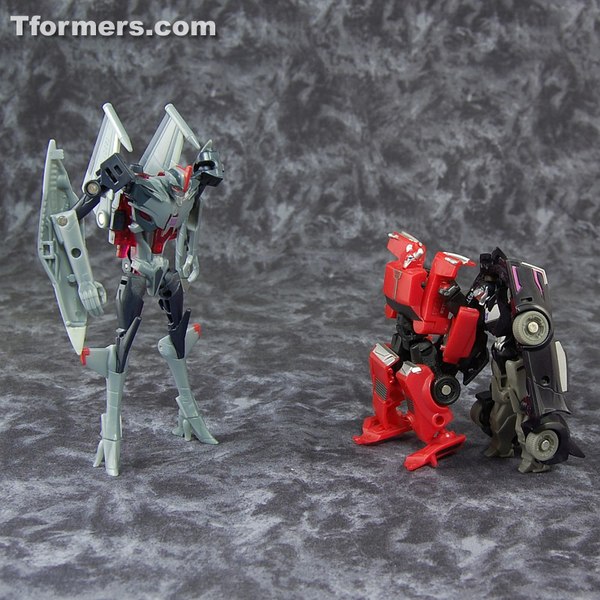