Sneaky Starscream always has a plan. He builds his plots, layer on layer, for months or years - and all with one goal: to take over command of the Decepticons and finally destroy the Autobots once and for all.

And now, my Cyberverse Wave 1 collection is complete with my acquisition of Starscream, everybody's favorite scheming, backstabbing toady. As with Bulkhead and the Vehicon, Cyberverse had Starscream before the traditional size classes- there was a First Edition Deluxe Starscream, and later there will be a Voyager Starscream, but right now, the only way to get Commander(rank) Starscream is to buy Commander(scale) Starscream.

(...how weird is it that Transformers has been around long enough to have traditional size classes!?)

With the exception of his wings and his forearms, Starscream is pretty well on-model. It's not possible to get the wings to sit high enough on his back to put them where the belong, though you can get close. The forearms look a bit simpler and more "human," and are carrying the nosecone of a jet on the undersides. That and the tailfin of the jet are about the extent of the kibble on the Robot Mode. His spindly proportions are represented quite well, and his likeness is pretty nice as well- as with Megatron, I dig the eyebrows. As with all the Cyberverse Commanders, he has extra clear plastic in his chest so that when we get the playsets with light-up features, you'll be able to make use of them. In terms of coloration he hasn't lost much compared to the CGI model, though I'm pretty sure his thighs should be gray like the lower legs, but it's not a big thing to me. He's probably one of the least-altered Commanders when you get down to it, structurally speaking. 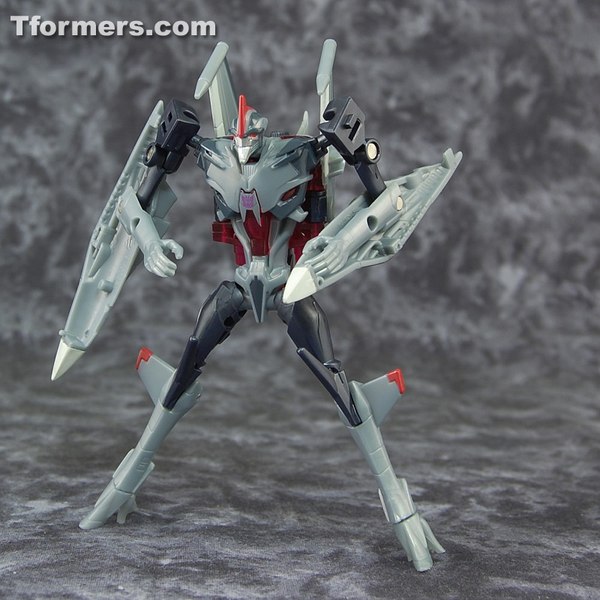 Because of the transformation mechanism his head doesn't move, but even if it weren't for that it's so deep into the torso that a swivel would be useless anyway. The shoulders swivel in a full circle and swing up pretty high if you line them up correctly. His elbows are hinges though, and I'm so used to ball-joints on stuff this size that the swivel they provide is sorely missed. But the elbow does fold into a very tight V, and can fold over even farther if you abuse the transformation joints. And you can separate the forearms from the nosecone sections too, which does help him look a bit less cheap. Other than his hands proper, he has one set of 3mm hardpoints, on the forearms. You can't fold the nose fully out of the way though, so it's of limited use to do so- it's a matter of personal taste more than anything. The hips are ball-joints, and the legs can swing straight forward, straight back, or reasonably far out to the sides but not enough to do a split. The knees are also hinges but due to transformation requirements and the fact that they're incredibly skinny, they can double over on themselves completely- they may well be the best single-hinge leg joint I've ever encountered. He has swivel ankles, which can help stabilize him a bit on his oddly-shaped bipod feet, but they're so tiny it makes balancing somewhat difficult in the long run. He's a mixed bag for sure, but unique among the Cyberverse figures in his articulation scheme.

It does a good job of using all the Robot Mode limbs and not leaving them hanging around underneath the fuselage. The arms become the nose (and cover Starscream's folded-away head, as well as most of the back's clear plastic) while the legs fold over and the feet wrap around a pair of pegs to form the tail of the jet. Then you swing down the wings and tail, and you're good! It's a pretty solid transformation, and covers most but not all of the red plastic on the torso, too. 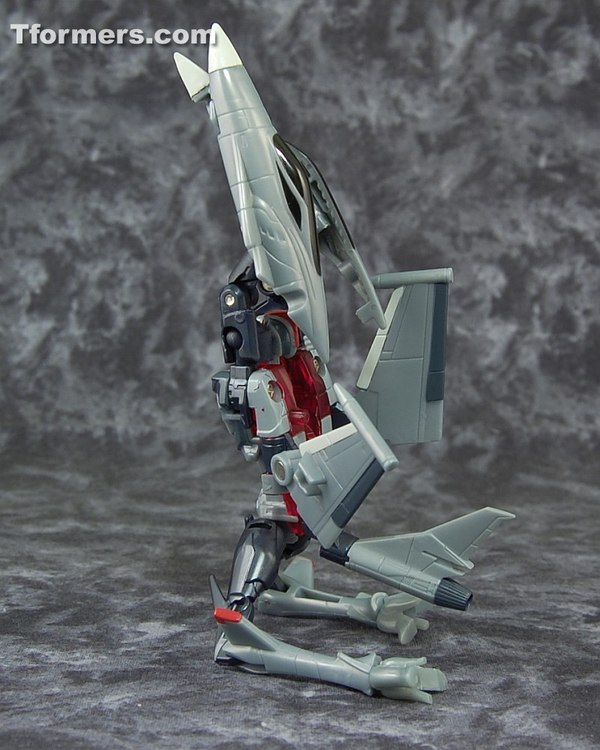 Starscream is a more jagged approximation of an F-16 Fighting Falcon. The main distinctions in color scheme and physical differences are necessary due to transformation. The hinges for the wings are a darker plastic- I'm assuming it's some type of ABS. But there are some nice details here- I like how the shoulders become the intake on the underside of the jet. Pity that there's still a robot torso and thighs down there. And there's really no avoiding the fact that there's a pair of feet sticking up by the wings. But it's less unpleasant than some Starscreams I've owned, and it doesn't bother me as much as Bulkhead's pile of robot parts sticking out from under his truck mode. What is pretty bad is that the seam on the nose of the jet shows badly. It's really noticeable, particularly up in the front where the nosecone is white. The nosecone and vertical stabilizer are both made of softer plastic, but so far I've had no trouble with warping. There's only one set of hardpoints on this mode either, but it's right where you'd expect, on the wings. I'd complain that equipping the weapons kind of spoils the jet illusion, but that's true of most of the Cyberverse weapons, so meh. I am left wanting a set of proper-looking missile packs to mount here though- out of all the alternate modes in the show so far Starscream's the one that's supposed to be armed. 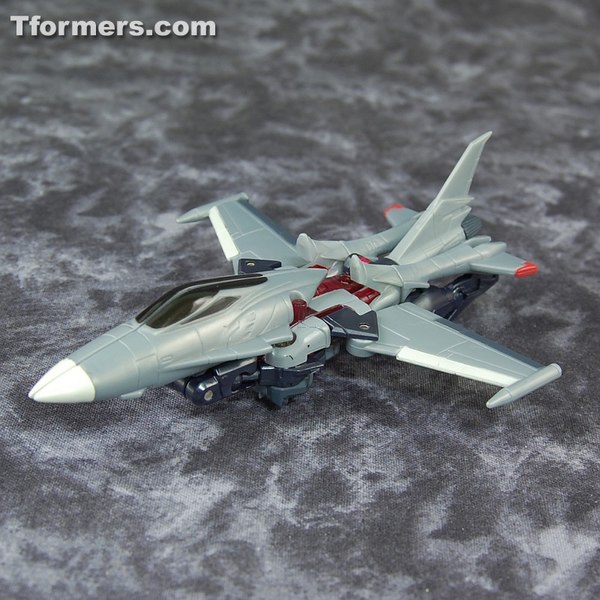 As is somewhat appropriate to Starscream, who is on his own side and no other at any given time, he has a color of plastic unique to Cyberverse weapons. Neither the Commander blue and Legion red of Autobots nor the purple of Decepticons, Starscream uses a very deep red that's close to magenta. Even moreso than most of the other Cyberverse weapons, this isn't a "weapon" per se as it is Starscream's entire transformed forearm rendered in vivid red. He's only one of two Cyberverse figures in Wave 1 with a pair of weapons- the other being Optimus Prime -and he's the only one with a specific left and right weapon. They really look quite good, and I suspect they're going to end up the closest approximation of Starscream's onscreen weapons we'll ever get - even the Voyager will probably have incredibly thin arms that aren't able to do something this elaborate. You can put them in Starscream's hands, on his forearms, or on the jet wings- though as I said they don't look terribly good there. And of course they have a socket to plug other weapons into as desired, and a peg on the back in case Starscream has an urge to beat somebody with his own arm. 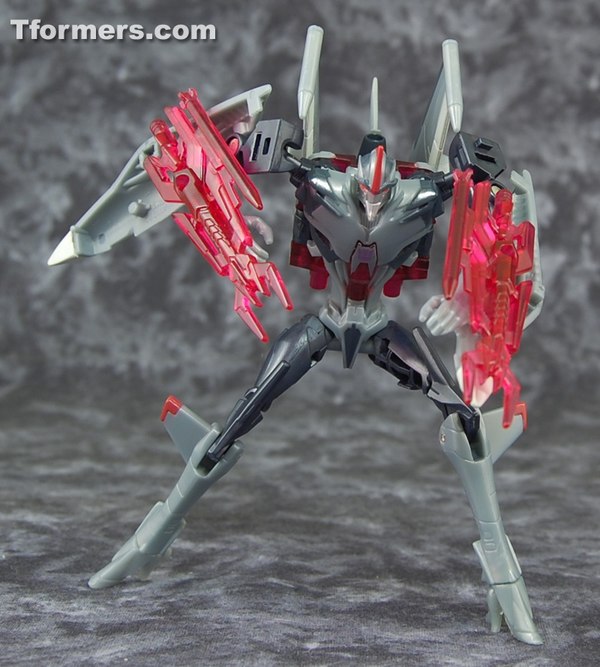 Starscream rates Very Good on the Figurereviews.com Non-Numeric Rating Scale. He's decent-looking, though moreso in Robot than Jet Mode, and I really like his weapons. The worst I can say about him is that he's tricky to balance and his feet could be better hidden in Jet Mode, but at this scale and price point? Foot obscurity, at least, is a minor concern. He's worth it, especially if you're getting the rest of Cyberverse anyway. 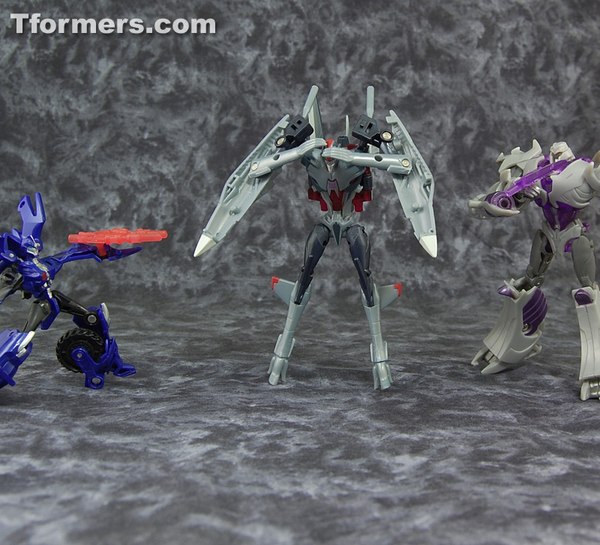