Breakdown is more than happy to take any mission Megatron assigns him - Especially if it means a chance to take on Bulkhead. The two big bruisers have had a beef for a long time, but Breakdown means to end it on Earth, once and for all.

Okay, we've got a small problem, and the problem is that Breakdown is small. Where Bulkhead is a Commander-class figure, roughly akin to the older Scout figure class, Breakdown is a Legion, the class formerly known as Legends. The smallest size class Hasbro makes. That's kind of a problem, especially since his bio stresses his rivalry with Bulkhead so much. What might've been forgivable is if they'd talked up Breakdown's partnership with Knock Out, who will be a Legion-size figure included with the Energon Driller coming up soon. But no, he's Bulkhead's tiny, tiny rival.

The likeness is decent for pre-eyepatch Breakdown. The detail is pretty nice and spot-on- body parts all look as show accurate as is possible, with the lower legs and arms being the least accurate because they have the most visible vehicle parts. He has five sockets for Cyberverse weapons in this scale: his fists, his forearms, and one in the center of the tire on his back. He might be too squat- I'm talking proportionally here, not size this time. He should obviously be wide, but not quite this wide; he's noticeably wider than he is tall, and his arms are huge. He looks more than a little like a gorilla. His face is among the best painted in Legion class, with a silver helmet, red face and (two) yellow eyes. That much looks great. As frequently happens in Cyberverse Legion, he's distinctly underpainted otherwise. There should be a lot more silver on the arms and legs, and the black thighs should be the same color as the silver shoulders. Being a dark metallic blue as he is, the black has the same blending problem as Arcee's black plastic bits have. He's still not as painfully monochrome as Bumblebee- nothing is -but it could look better. 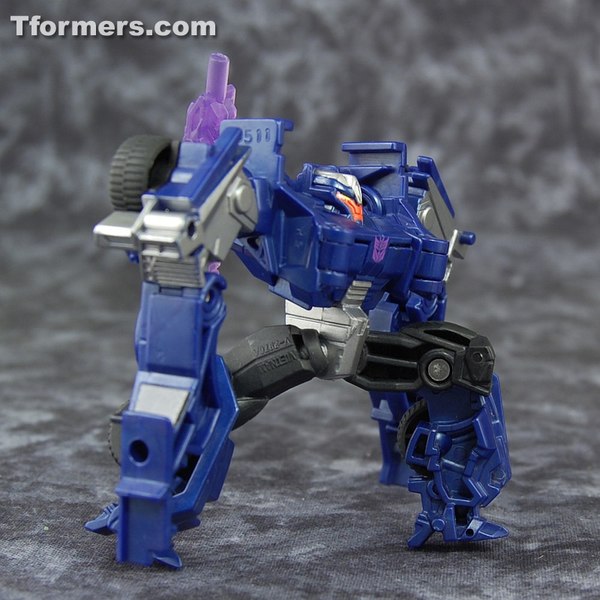 Articulation is not unusual for Cyberverse in terms of amount, but placement and range is all oddball. No neck of course- the head's slightly hollow. The shoulders swivel in a full circle without resistance, and swing backwards for transformation purposes. It is some usable extra range, but you can't swing the arms out to the sides at all. Technically the figure has elbows, but they swing inwards as opposed to forwards, heightening the apelike vibe I get from him. The hips sound great on paper- they swing straight forward, straight back, straight out to the sides, and all points in between! -but they just love to pop off of the silver-painted hip joints. The knees... aren't. They're transformation joints that move in the wrong direction to be humanoid knees. You can force them to go in the more traditional knee direction, but it's obviously not designed to work that way even though it very easily could've been.

The other issue is that the toy feels flimsy, which most Legion figures manage not to do. Beyond the hip problems, the folded-up transformation mechanism for the shoulders doesn't lock down, so it likes to pop loose. The transformation hinge in the torso does lock down, but doesn't lock down strongly enough, so if you try to hold Breakdown by the midsection when posing his torso will pop apart. Not good.

It's reasonably complex for the size. Swing the tire over his head and curl his legs up so that he's more or less rolled up in a ball, then fold up his arms and swing them around to form the hood of the vehicle. Lining up the front end properly is the most difficult part. 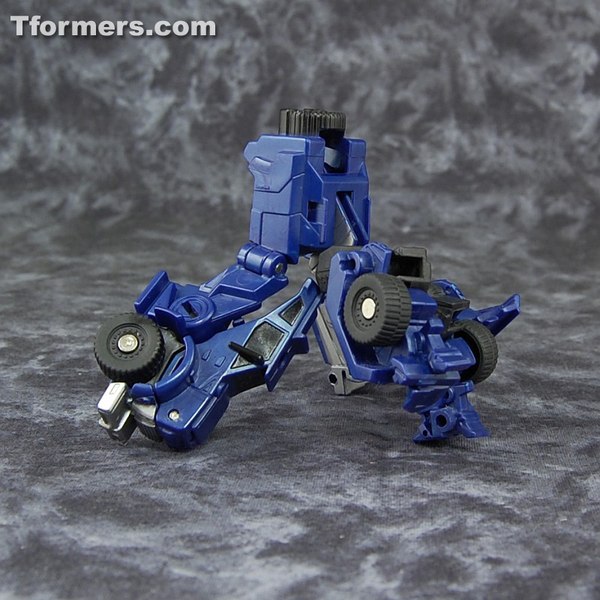 Breakdown transforms into a super-chunky armored car that's a pretty good likeness for the animation model. It loses a little color, as the Robot Mode did, but since there was less color to begin with it's not as big a deal. The rear window isn't painted, and there would be some lighter blue patches if this were a full-service action figure (I hope; let's wait and see what Voyager Breakdown looks like) but it's not bad. It's definitely a less "friendly" looking vehicle in the same basic class as Bulkhead: the smaller windows and thicker hood make him look much meaner than his rival. Aesthetically, it's another of those cases where the transformation seams don't really mesh beautifully with the lines of the truck. The most noteworthy seam does follow the basic trajectory of the windows, but still looks kind of off. 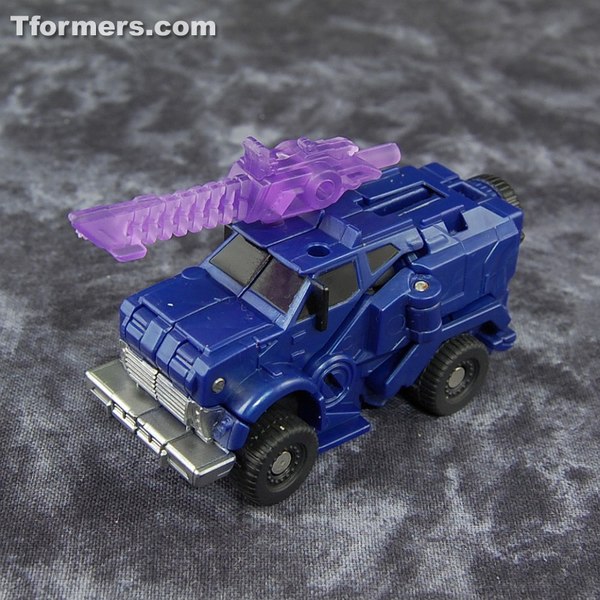 Three hardpoints here: two on the roof, one on the spare tire. Technically, the gun is the part of the Vehicle Mode as it's shown in the show. And it rolls very easily too. It's not a bad toy in this mode, but again: small. Just as with the Robot Mode, it's one of the most laughable cases of Transformers not having scale at all that I've seen in a good while, and not just for being tiny in comparison to Bulkhead. It's a big truck that's shorter than a motorcycle!

Probably the best part of the toy, Breakdown gets his own gun instead of a reused piece. It's a great likeness with a lot of the same details from the show, plus of course a peg on the back and sockets on the sides for the Cyberverse interchangeable/stackable weapons gimmick. It's a great piece and it frankly deserves to be attached to a better toy. I'd also like to point out that Breakdown also has a hammer, which they might possibly have been able to cost into a Cyberverse Commander-class toy. 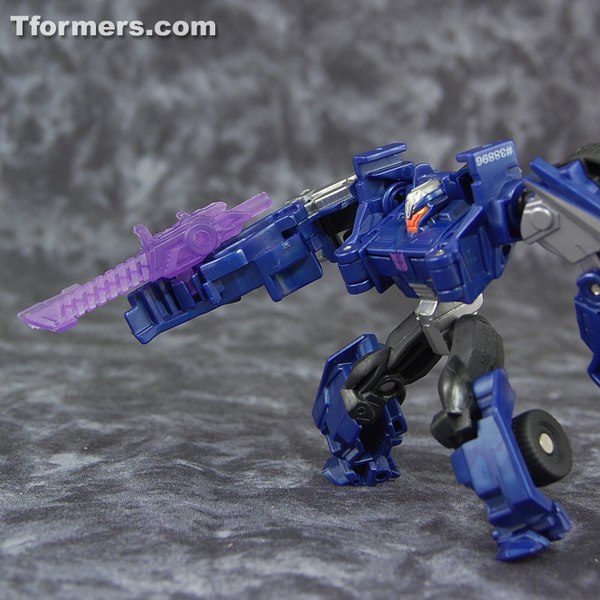 Breakdown is Not Worth Owning, which conveniently is a rating on the Figurereviews.com Non-Numeric Rating Scale. He likes to fall apart on you, with both pieces falling off and an unstable Robot Mode, and has joints which could have been knees but elected not to become knees. The Vehicle Mode is less objectionable, and the accessory is the best possible in this scale, all of which would otherwise have made him eligible for the Could Have Been Better rating. But he's also not in scale with his arch-rival Bulkhead, and that was just an error too far. Considering Season 2 of Prime, which I won't spoil here, I could understand not doing Breakdown as a Commander if there weren't a slot available in that scale. But we're getting Ironhide, who as far as we can tell is not even going to be on the show. What the heck!? 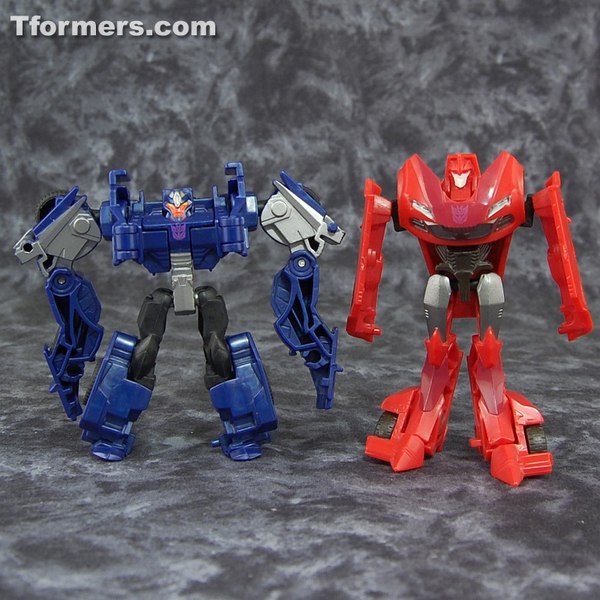