Dreadwing is fiercely loyal to Megatron, and is nearly as savage in battle as the Decepticon leader himself. As a Seeker, he proved himself a force to be reckoned with. As Decepticon second-in-command, he may be the end of the Autobots.

In terms of character, Dreadwing's not too bad. He falls within the "honorable evil" character type which is at least good for offering some depth of personality. Plus having Tony Todd voice him hurts nothing. At least this time that voice talent is not utterly wasted as it was with The Fallen in ROTF. But I decided to buy the toy long before any of this was known, almost entirely because the colors really appealed to me. I can be simple like that, but thankfully the toy has more to offer than just an agreeable deco.

A Prime-stylized edition of something like an F-35. From the top, anyway. As with most any jet Transformer of this size, some robot parts underhang is unavoidable, most glaringly with the robot arms which are placed such that it's impossible to try to even imagine them as supposed to be there. The robot parts are all made to secure in place for vehicle mode to minimize any issues of loose elements, but it isn't perfect. The arms peg to the legs and hold on just fine, and the legs have tabs at about the ankle to hold in to the fuselage. The feet seem like they're supposed to meet and form a triangular projection behind the plane, but it doesn't actually work that way. The feet only move in a limited arc and it's not enough to rest flush together, and it's not even adequately to keep the points of the toes from hitting each other. This makes it physically impossible to completely line up all the bits of the rear of the jet. And keep in mind the tail planes are part of the leg blocks, so they're going to be part of the off kilter arrangement. Thankfully that is the worst of the structural issues, and it is fairly minor overall.

Visually, Dreadwing held a strong appeal for me with the colorscheme, which is much more attractive and eye-catching than Skyquake was, so I'm very glad the merchandise prioritized the second use of this design. The dark blue and yellow is obviously Blue Angels inspired, and even with the relatively simple paintwork expected on a Cyberverse figure is laid out nicely. Dreadwing's special Decepticon air force insignia on each wing is a nice touch of detail, and I generally appreciate extra flourishes to the standard faction emblems. The only complaint I'll lay with the paint work is the coverage is a little thin, so much of the paint has a greenish tint where the base blue is trying to bleed through. The nose of the jet is actually clear yellow painted over to match the plastic, and the color match is pulled off very effectively; if the bottom wasn't left unpainted, it would be hard to tell it wasn't cast the same blue as the majority of the body. There's also a large area of clear plastic between the wings, but it's a separate element and doesn't have any special paint considerations. It's only really meant to serve the robot mode anyway, but there's a peg that can be used to attach a weapon if you like. 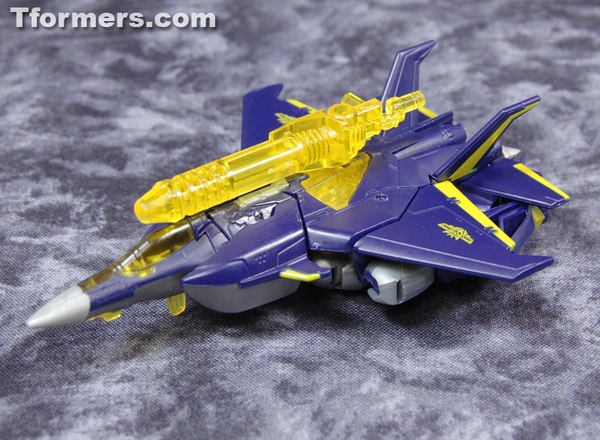 I'm reminded of nothing so much as the Cyberjets from late in G2, although stepped up a degree. It's a pretty tried and true design, and I have no problem with seeing this largely recycled engineering model. As well, since this is a variation of the classic Macross Valkyrie transformation, you can get a very effective gerwalk intermediate mode with this toy if you're so inclined. The legs are even placed well for easy balance in this configuration. A nice bonus for sure!

The only problem I've found with the execution of the full transformation is weak hip joints that can see the legs separated from the body before transformation parts will shift between modes. A slight annoyance, but as it all easily pops back on, let's just be happy it's nothing that will irreparably shear off under its own tension or something of the like. 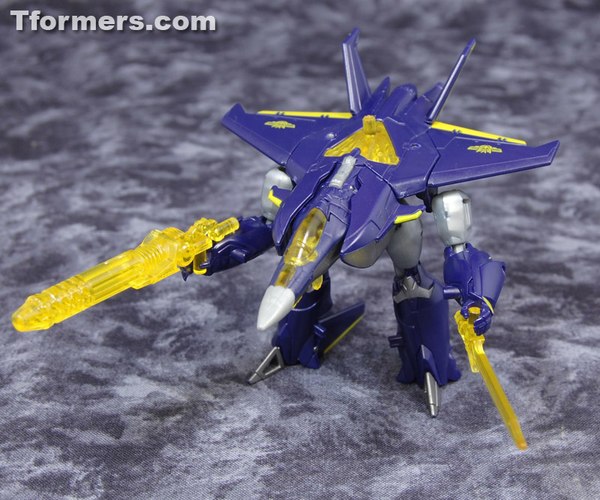 I doubt it's 100% exact, but to my eye this is a great likeness of Dreadwing's media appearance. Thanks to some of the folding steps in transformation, an amount of silver takes place in the torso to add complexity to the appearance, and big fields of yellow on the undersides of the wings also work to break up the blue. These little touches make a big difference in dressing up such a small toy with only a few parts to go around. It's more than I would have expected going in for any of these figures to offer.

While having the appearance typical of a Prime design, the relative simplification at this scale downplays those aspects quite a bit. While of course more mechanically complex in some ways, it still reminds me of nothing more than a Cyberjet robot mode, and is even roughly the same overall size as a robot. Taking this view of it as a starting point makes it easy to pick out how it advances the concept by adding things like thigh swivels, articulated shoulder pads, and heel spurs so it can balance easily. While the head is a reasonably complex sculpt that captures well the likeness of the character (with some really tiny painted in eyes that I don't even know how they did that), some trade off in the design of the toy means the head is stationary, without even a swivel neck joint. But that is the one, single thing I can call disappointing in the build of this robot. The details are so subtle in the face that the early press kit photos of the toy from around Toy Fair made it look a lot like a Cyberjet style visor face, or otherwise a bit like Depth Charge, especially given the other colors on the toy. However in person or with close enough photography that effect is reduced or eliminated altogether. 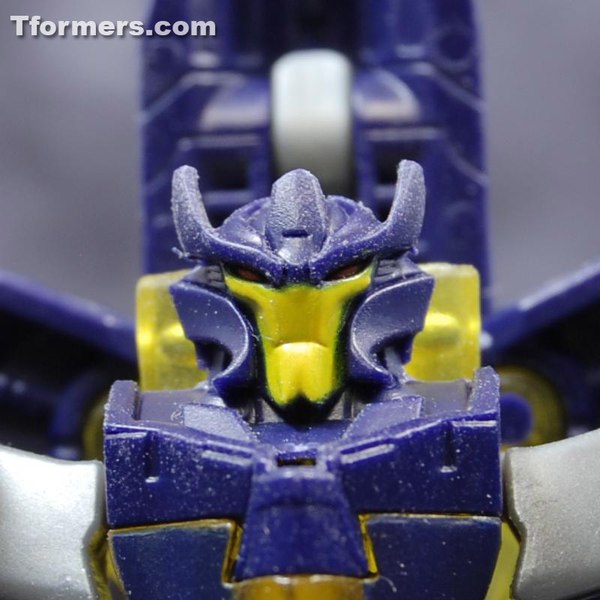 All of the joints have great range of movement, giving the figure really nice articulation. The pelvis can be a sticking point by limiting the forward range of the hips, but it's not severe and can be worked around without appearing very unnatural. The toe and heel are little more than spikes projecting front and back, but the base of the leg is comparatively thick and makes a big enough footprint to gain stability a lot greater than you would tend to expect. And the loose ball joints that affect the hips during transformation make no noticeable impact on posing the robot mode.

The clear bit on the back I mentioned before lines up with the cockpit canopy now, so if you have a large Cyberverse playset, or some other fairly bright, focused light source, you can shine it through the back and make Dreadwing's chest glow in a given color. The red of the Energon Driller would produce a pretty strong red light in the torso, for instance. The peg on the back can also be useful for stowing an unused weapon, in case you don't happen to have a playset to hook up to it instead.

Dreadwing comes with a cannon and sword, emulating his in-show weapons. They each have a fair amount of molded detail, but being entirely clear plastic it can be difficult to distinguish unless strongly lit. The cannon has three peg holes, so the sword can be mounted as a bayonet or even treated as a gunblade if you're one of those kind of people. It can also be side-mounted to store both weapons on the back peg together, since the sword lacks its own sockets. One word of caution though: I found some signs of stress around the sockets after plugging the sword in, so it may be just the slightest bit too tight the way the plastic cured. It may not lead to anything, but if it would be a bit worse on an errant sample and a lack of care was had, I could see either socket cracking or even peg snapping off. So be sure to take it easy on these while you figure out just how the tolerances are playing together. 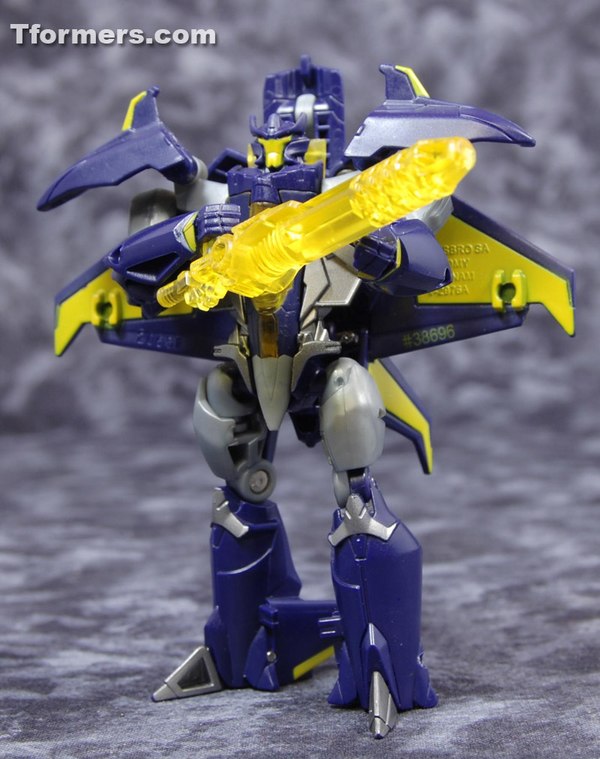 Both weapons also have secondary pegs which can be plugged in a base's light unit or utilized as alternate holds for the figure. The secondary on the cannon supports that whole gunblade notion I mentioned already, for example. The weapons hold comfortably in the hands, aside from the cannon's second peg which may be too tight in the hand for most people's comfort. But don't be fooled by the peg holes on the forearms. Despite being close in size, they're a little too small for the pegs to work as mounting hardpoints; you'll stress the blue plastic before you make them stay put in there. The weapons are intended to be carried under the wings in vehicle mode and have hardpoints to serve that purpose. Of course you can carry the cannon on the back of the jet instead in case you like your artillery to be out front and in plain sight of everyone around. Or just if you have other stuff plugged under the wings. Whatever.

In a lot of ways, Dreadwing calls back to Cyberjets in style and feel, so it elicits a strong nostalgia response from me. If you're peculiar like me and have waited for years to have a new member of this group, Dreadwing ought to scratch your itch effectively, fitting in perfectly in size, while bringing the design notions a little more up to date. These same factors make Dreadwing a fine figure all by itself. I'm very thankful it made it in the roster of Commander-class figures. While a version could have existed at the smaller level it would not have been able to match the high points this reaches. 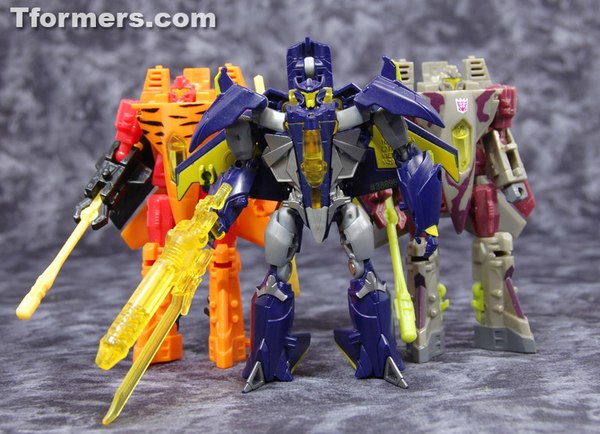 Dreadwing scores Excellent on the Figurereviews.com Non-Numeric Rating Scale, and is really worth a look even if you're not sold on Cyberverse in general. Actually, the sad part for me is Dreadwing's excellence makes me start to want to look at more Cyberverse figures, which I had so far been doing well to avoid. Sad trombone.