Since a home video set of Transformers Prime's second season is a ways off so far (as of this writing only around half of season two has yet aired) it isn't surprising that Shout would look to take advantage of an opportunity for a supplemental release. As the end of season one and the beginning of season two were done as "event" story arcs, they're a great source for a quick one-shot DVD release, much like Darkness Rising from what seems like so long ago now.

The menu is an extremely simple affair, with four selection options over a semi-static background image. The Chapters selection is a basic list of chapter titles, but without pre-existing knowledge of the episodes, it can be a hit-or-miss game trying to find a spot you're looking for since there's no preview images of the portion you're jumping to. While functional, these basic menus disappoint a bit, but they're not the main attraction. 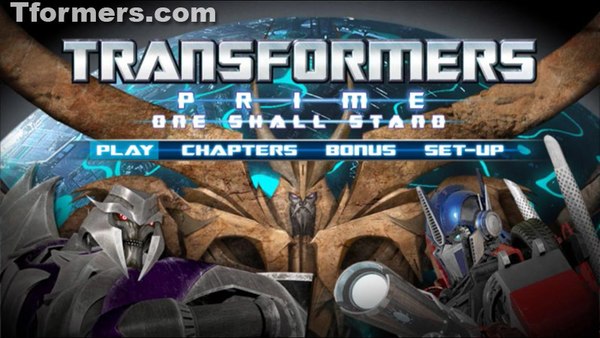 "One Shall Stand" spans the final four episodes of the first season and opening three episodes of the second season of Transformers Prime, in a feature length format. Opening sequences, recaps, commercial cuts and the normal credits rolls have all be trimmed out to make each scene and episode proceed smoothly from one to the next. The feature uses a cold open of the beginning of "One Shall Fall" before cutting to the only theme and intro sequence for the entire presentation. At the end is an extended, cinematic style credits sequence that covers the cast and crew for all of the included episodes. As this is ultimately treated as a movie experience, that part is very fitting and serves as a very appropriate cap to the feature. This is the sum of seven episodes of Transformers Prime, and even taking in to account the few cuts to support the smooth flow of the story, it is well over two hours of primary content with no interruption. That can make it a significant time investment, as well as straining even the best of attention spans. I've seen over the years where other efforts like this have been realized by creative edits to tighten and shorten the content of several episodes to be a more accessible experience as a movie, and I feel like this could have benefited from that style of approach. Even failing that, I would have preferred to have the Unicron and Orion Pax story arcs to be done as two separate "movies" on the disc, so there's an easy point to stop and take a break for a while between them. Plus it would have dressed up the copy for the packaging, to boast the DVD as a double feature with two full length stories.

The first bonus feature for this disc is a panel style discussion with part of the series writing staff. It runs about 12 minutes, and covers story and character development concepts for Transformers Prime, albeit it in extremely broad strokes that really don't offer any sort of insight or deeper understanding of the process of the series and doesn't especially touch on any of the episode content on this disc except again in a very vague, generalized way. It can be an interesting diversion, and for anyone very casual with the series it might be decently informative, but for what I think the major audience of this would be, it's kind of a fluff piece. The other bonus feature is an animatic version of "One Shall Rise, part 2", presenting the storyboard style outline of the episode from start to finish, with the dialogue track mixed in and the odd rough CG element here and there. For fans of the development process of an episode, this is surely a neat extra to find, though for my own part I doubt I'd ever sit and watch it from start to finish just for my own entertainment.

Sorely missed in the extras department is some kind of commentary from writers and/or voice talent, but I would expect that kind of material is being held in reserve for the full second season set to come down the road.

While of course not the high definition the show is meant to be experienced in, these are without a doubt the very finest examples you can ever ask to have of the show in standard definition. If you have only ever experienced the show to date through SD airings on The Hub, this will expand your perception of the series to an entirely different level. The video is amazingly good, with a high quality transfer that shows no obvious encoding artefacts even in high action sequences. I viewed this disc on an older model DVD player without up-convert options on a 32 inch HDTV, and my expectations were completely exceeded in terms of how clear and crisp the picture looked at all times. Blu-ray will be king for Transformers Prime without question, but nobody is letting the DVD version simply slide by either, and I'm grateful for the care that was given to making sure it would be the best visual experience this medium would allow.

There are two options, for basic stereo, and Dolby 5.1 surround sound. I'm not a home theatre type, so I was only able to accurately judge the stereo option here, and it was a great experience itself. I felt like I was able to pick up more nuance and subtle sound than I did through the broadcast equivalents, and at all times the sound quality was clear and clean.

The cardboard sleeve is an identical copy of the outer facing of the case cover. The inside of the cover is a shot of Cybertron's core, taken from one of the episodes detailing Optimus Prime's history, making for a very striking interior. The copy we received also has a single sheet insert advertising the upcoming Prime game on Nintendo platforms as well as other Shout! Transformers home video offerings. 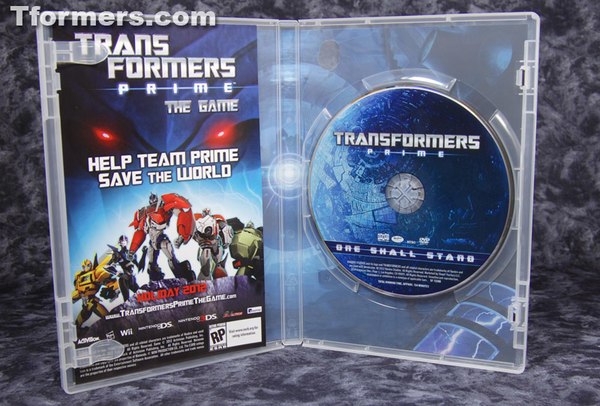 My feelings are mixed on this. The technical presentation, the quality of the video and audio is first rate and is truly the next best thing to a true HD experience for Transformers Prime. That in itself should have tremendous value for anyone who can't get The Hub in HD from their TV provider. I feel less positive toward the content itself, though. The "movie" after a while starts to feel like it's dragging along, and despite an editing effort that makes it all seem like an uninterrupted narrative, the Unicron and Orion Pax story arcs really don't mesh together well and would have been better served if presented as separate features here. The SRP of $15 honestly strikes me a bit on the high side for what you really get, especially when compared to the full first season DVD set which delivers a lot of content for only about double the price. But compared against many DVD movies, this is actually priced very competitively, and is definitely worth considering if you don't have HD access to Transformers Prime. Be careful though; seeing this could ruin watching The Hub in standard definition for you!