Knock Out has spent so much time in the underground weapon design and cyber-surgery racket that he's come to literally prefer being underground. For moving shipments of plasma fusers through Autobot territory, there's nothing better than the Energon Driller.

One of the things that appealed to me about Cyberverse was the promise of playsets like this one. You don't see a lot of those in Transformers. You see characters who transform wholly or partially into playsets, but a dedicated one like this is pretty unusual. Since it's currently also the only way to get fan favorite Knock Out in Cyberverse scale, that was two good reasons to seek it out.

It's a pretty good match to the show model, though of course all the spikes on the drill are less spiky now for child safety reasons. I love drill tanks- it was an excruciating wait, way back when, for Playmates to finally release the Mutant Module for Teenage Mutant Ninja Turtles. (It first appeared in the show in `88, didn't come out as a toy until `90.) The Energon Driller is a pretty nice expression of the style, though unlike any other model I know of it's an open-air vehicle. There's a central platform behind the drill with a viewfinder/control panel that pulls up out of the machine that gives your Cyberverse Decepticons something to hold on to. It's very cleverly designed with 3mm pegs both above and below, as some figures- Knock Out being one of them -can't grab the top set because of their vechicular kibble. The drill part itself is in alternating rings of silver and clear purple, with the tip of course being soft plastic. Mine's slightly off-center, but not too badly so. Still enough to tweak my OCD. 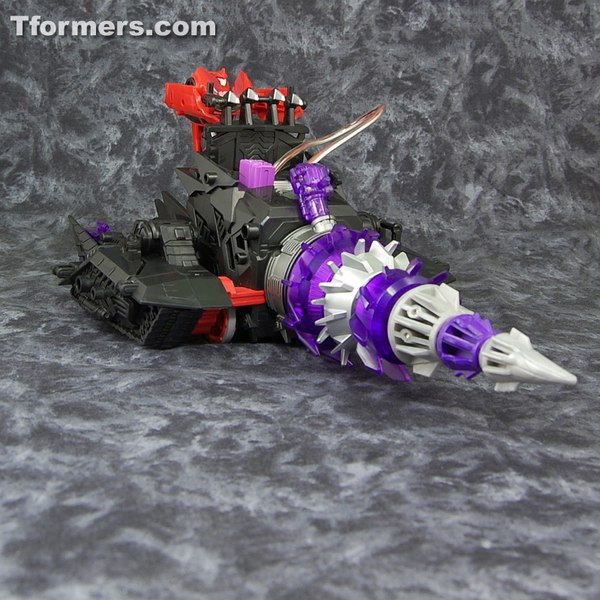 The Driller is peppered with rails for figures to grab onto and sockets for both 3 and 5mm pegs. Don't know of any Cyberverse figures that use 5mm, but if you've got a smallish Deluxe you'd like to use this with, it'd work. (And since all the Deluxes are smallish anymore, he grumbled...) Going just by the number of rails and other places to clamp figures onto, you could probably fit seven or ten Legion figures on here- time to troop-build Vehicons! But that's just the beginning of the features on this thing: first and most obviously, the drill turns as it rolls. It's a solid feature and it works fine. Secondly, it transforms, slightly, into a battle platform when you pull back on the red lever behind the pilots' station. The treads on the sides spread out, and the missile launchers(of course there are missile launchers; it's a Hasbro vehicle) flip open. When I first got the Driller, the one set of treads was threaded oddly and wouldn't retract fully when I pushed the lever back, but I managed to get that back into place. But one of the missiles still doesn't quite seat properly, so I have to transform it very slowly so as not to fling it across the room. Each launcher has its own set of handlebars, so you can have others manning the guns. 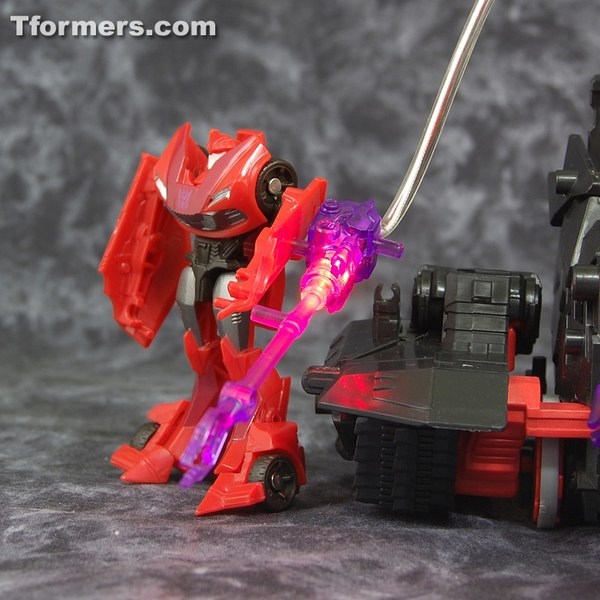 The last feature is the "Energon Booster," a red LED inside a housing full of pegs and sockets, mounted on a wire so that you can attach them to Cyberverse weapons to get modern-day G2 Laser Rods, or you can plug them into the backs of the Commander-class figures and take advantage of all that clear plastic in their torsos. The Booster is activated by a purple button with a Decepticon emblem on top; pressing this button in the battle station mode will also make the drill spin. Plugging the Booster into the socket on the Driller will light up the purple segments of the drill when the button is pressed. It's a pretty neat playset, all in all! 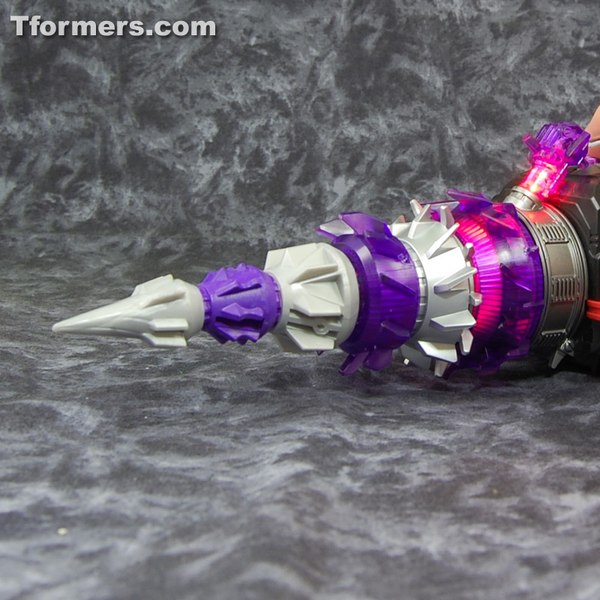 As with a lot of Legion-class figures, Knock Out is more an approximation of his animation model than an accurate representation. The hood of his sportscar mode becomes his torso with no real modifications to shape or proportion, so it's a bit bulkier than perhaps it should be. The Decepticon symbol on the hood is a reddish kind of purple, and so faint it's barely noticeable under ordinary light. His face is decent for the scale, and he even has red-on-red painted eyes, which is a nice thing considering some Legion figures have no eyes at all. His arms are of course kind of suggested, sculpted in relief on the back of the car's sidepanels. The lower torso and legs fare better since they're largely invisible in Vehicle Mode. They also get a lot more paint than the arms, and thus are almost right; the bottom of the lower torso piece should be red, and his knees and feet should be silver. But otherwise they come out okay. In addition to his hands, Knock Out gets 3mm ports on his back and outer arms to attach weapons to. Articulation's limited to shoulders and hips, plus you can fudge the transformation joints for "ankles." So articulation-wise he's about equal to Legion Bumblebee but much better-looking, as Knock Out himself would be the first to tell you. 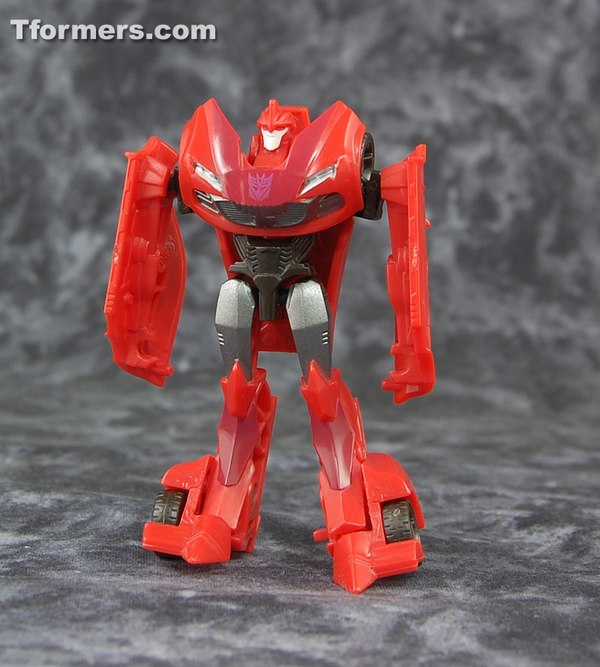 Transformation's similar to Bumblebee too, with one hitch: you lower the arms, fold up the hood, fold up the feet, and lock everything together. The catch is you have to lower the arms first, as the joints block the hood otherwise. Vehicle Mode is a pretty good approximation of his animation model, much better than the Robot Mode is. He loses his yellow highlights, but so did the Deluxe, so this should surprise nobody. But he does keep his two-tone maroon and red paint job! The seams are largely evident, and the hood seams are especially gappy, but the lines of the transformation are more or less pleasing to the eye. He has three sockets for weapons in this mode, not that either of them look that great attached to a sportscar. But you can at least have a buzzsaw attached to the side of the car to slice up Autobots as he passes. 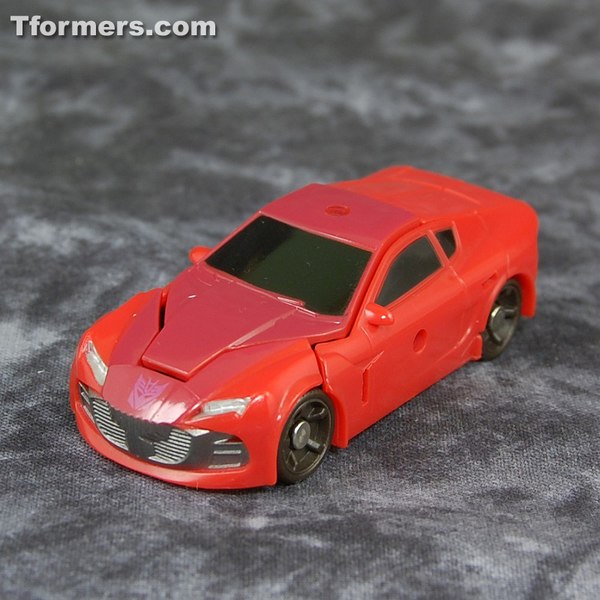 Knock Out, unlike most single-carded Legion figures, comes with two weapons: his Energon Prod, and his buzzsaw. Both have a variety of pegs and sockets so they can attach to other weapons, other figures, the Driller, or especially the Energon Booster. The Prod's central spike is barely visible, but it'd have been nearly impossible to mold cleanly and safely at this size. 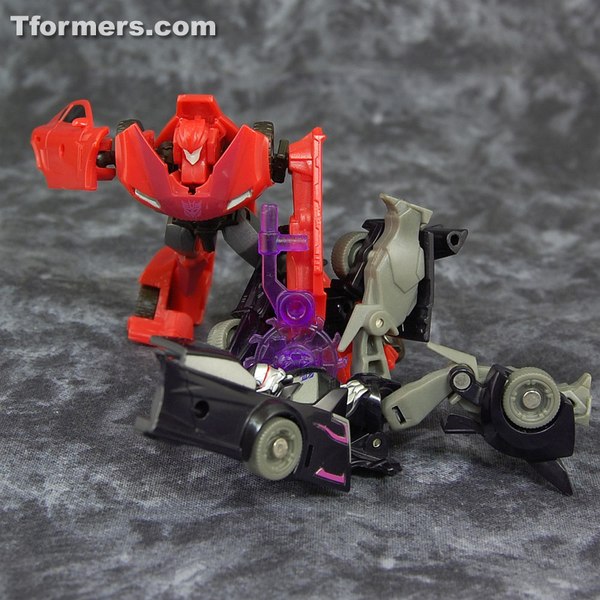 While Knockout isn't as articulated as I'd like and the Driller has a few quirks, this set rates Very Good on the Figurereviews.com Non-Numeric Rating Scale. Knock Out alone might go as low as Good, but as Bumblebee did, but he has two accessories and is less monochromatic, both of which make him an improvement over Bee. The Driller has a lot of fun functions, is reasonably show-accurate, and finally puts the clear plastic of your Cyberverse Commanders to use, so it also rates Very Good on its own despite the flaws which I assume to be unique to my copy of the vehicle. Of the two Cyberverse Vehicle Playsets, the Energon Driller is shortpacked in favor of Wheeljack's Starhammer, which is shipped two to a case. If you want Knock Out in this scale or the Driller specifically, you may want to prioritize its purchase. 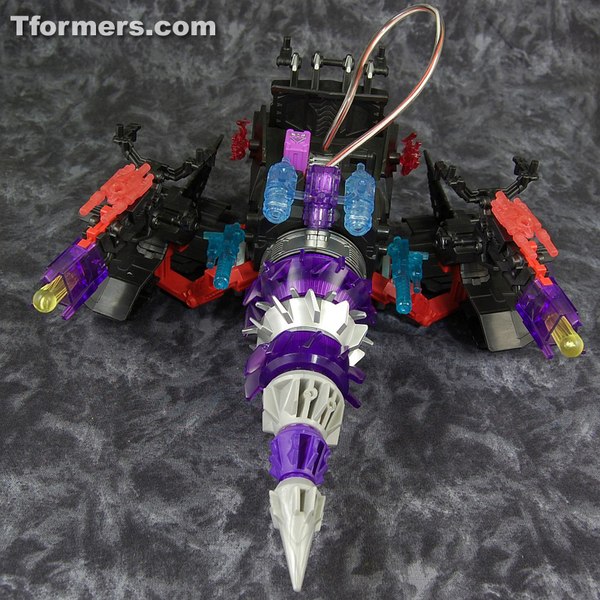