Prime First Edition stuff got a really bad break in the US. Two molds in fact would have never seen any US release without having been offered as special exclusives through SDCC and subsequently Hasbro Toy Shop. The normal form of Cliffjumper was never available in any capacity to US collectors without foreign aid of some kind, and the "Terrorcon" remold was just outright shelved along with its would-have-been casemate, the First Edition Vehicon.

In a move of considerable awesome, Hasbro used the Cliffjumper remold for the smaller of its SDCC Transformers offerings, expanding on last year's concept of special packaging and slightly modified deco. The result was something a lot more special than "Matrix" Optimus Prime from last year.

Of course then during SDCC, Hasbro revealed the return of First Edition in the US, and that it would include the originally planned retail version of Terrorcon Cliffjumper. So, uh, oops? It's not quite as bad as Deluxe Prime though: this Cliffjumper has a more extensive deco, accessory pieces that as far as anyone knows will not be repeated with the regular version, and perhaps most importantly the premium packaging that takes this a step beyond what was offered at this level last time. 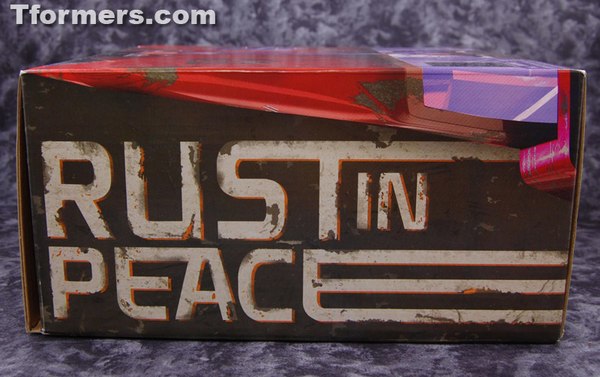 Typically I avoid comment on the packaging, because it's utterly pointless and I loathe when others waste time on what is a simple conveyance for the thing that actually matters. But it is much more than that in this case and especially now is a vital element of difference in determining the worth this release may hold for you.

In a similar line of thought as Prime's Matrix-shaped clamshell in a Prime's-chest styled box, Rust in Peace Cliffjumper comes to you in a box printed with the CG texture map of Cliffjumper's torso right from the show. Within is the real prize - a giant Terrorcon Cliffjumper head, painted in full color which contains the figure itself. The face is molded in a similar way to kids' Halloween masks, so details are a little on the soft side and are kind of few, but it gets across everything it needs to. The paint job does a good job of highlighting Cliffjumper's broken face, with Dark Energon leaking from the gashes and cracks. Sadly even if the eyes were not basically opaque, this is the wrong size and shape to make a viable Halloween mask itself. The figure can be removed 100% non-destructively, leaving you free once you've taken the toy out to put all the packaging to good use. 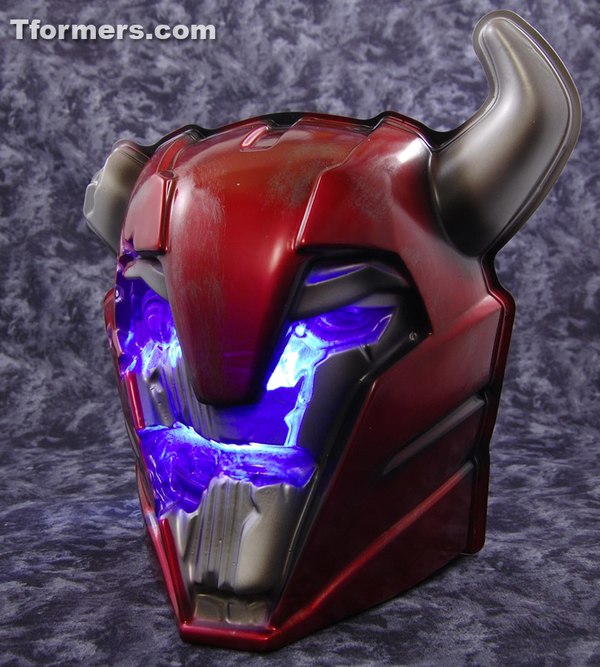 See, the last great touch with this is the packaging was designed so that once taken apart, the head could be placed on top of the box and make a simple bust of Cliffjumper. I don't know about you, but my home has long been missing sculpture of zombie robots, and I was not even aware of this fact until Hasbro told me so at Botcon. Of course, the sides and back of the box feature normal things like bio notes and product call outs, but the part you should care about is the front, with a plastic head placed atop.

The wearable Matrix from Optimus Prime was pretty cool, but turning the packaging in to a completely separate display element is great by itself, and the major paint job done on the face and helmet takes it far beyond what was achieved before. Hasbro's SDCC wares often boast impressive packaging, or at least entertaining ideas like Marvel Universe Galactus on an absolutely giant bubble and cardback, and this Cliffjumper is no exception. It just leaves me hoping and wondering how it will be topped for next year!

Now, let's be fair here: Nobody who's buying this release of Terrorcon Cliffjumper is doing so for its merits as a toy. More than likely anyone who just wants an example of the mold will grab either the Toys R Us release of retail Terrorcon Cliffjumper, or the Chinese Generations Cliffjumper that uses this body and a new head. No, in general I expect anyone who purchases this is after the packaging, and the differences from any other version of Cliffjumper that is or will be available to them. So I'll be focusing on that in this article and leaving comments on the build of the toy itself for another time.

The base colors are pretty much the same as the normal Hasbro FE Cliffjumper, with the exception of the transparent plastic for the canopy and light piping elements now being purple instead of light blue. As a premium release, Cliffjumper's damage deco was able to be expanded. The majority of the toy's flat surfaces now feature some sort of Dark Energon streak so it looks like the armor is battered or even deteriorating as the Dark Energon keeps Cliffjumper's body running. Good use of paint apps on the car's roof especially since it can leverage the clear plastic base to reach the same effect but using an absence of paint. With the clear purple there, these are easily the best looking damage spots on the figure. Another that stands out for me is the cracked windshield, partly because it brings a little bit of variety to the damage. 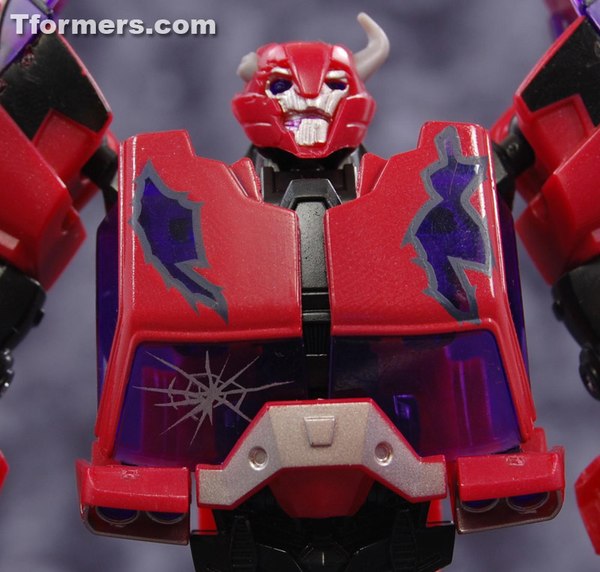 The only mold changes for the figure are with the head, which is now a bit worse for wear on its right side. It's not super well defined partly just because of the scale of the parts, but the difference is plain enough to see; most of the surface armor is torn away, the helmet shows cracks and dents (as well as a missing horn), and a bit of metallic purple paint makes it look like energon is leaking out of the damaged side of the face. It doesn't quite convey the wild, snarling appearance you might remember from the cartoon, but it does its job well enough. In a way, I wish there could have been more physical changes to the figure for this release, even just along the line of having some shallow gashes molded in instead of all being painted on. It doesn't appear as such a big thing in robot mode, but that's not the only consideration. 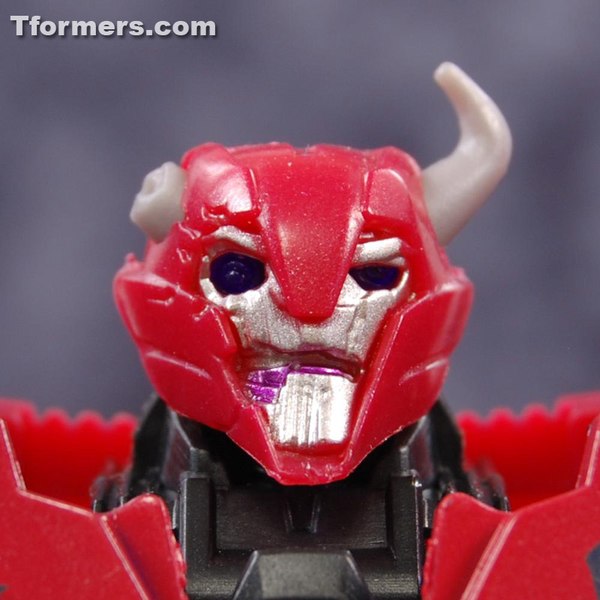 Despite extensive painted battle damage, the car mode still looks basically intact where I would tend to think the car should appear much more beat up. I'll be a little generous and assume that reanimated Cliffjumper wasn't capable of transforming anyway. But since the toy can, it spoils the illusion when all of the car's body lines stay like new, right down to the hood ornament. It's another part of why I'm glad for the windshield crack, since that at least looks like an expected element of car damage. I just wish it wasn't the only one. 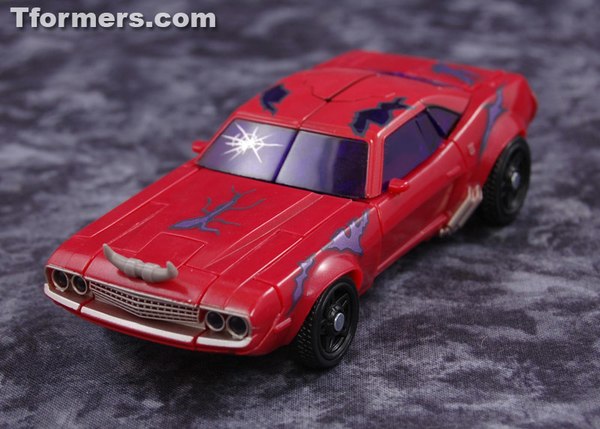 Oh, and the way the toy is built, you totally can split it at the waist for an even more accurate portrayal of the later stages of Zombie Cliffjumper. Obviously it's entirely unintentional, but that doesn't make it any less fun!

Exclusive to this release of Terrorcon Cliffjumper are two "Dark Energon" crystal elements. One is made to clip on the chest to emulate Cliffjumper having been impaled with the shard of Dark Energon that reanimated him, with limbs spreading out from the center to both hold the piece to the toy and appear like the contamination spreading out. Since it has to work around the existing toy, it's not entirely perfect; the chest panels can't be fully spread as they're supposed to while the crystal is clipped on, but since it covers most of the seam when attached, this isn't immediately obvious. The other thing is I'm finding the piece won't really lay flat against the chest. Given the nature of what it's supposed to be, it ought to be flush with the surface of the chest panels, but it invariably lifts away from the chest to a noticeable degree and spoils the illusion of growing and spreading across the armor. 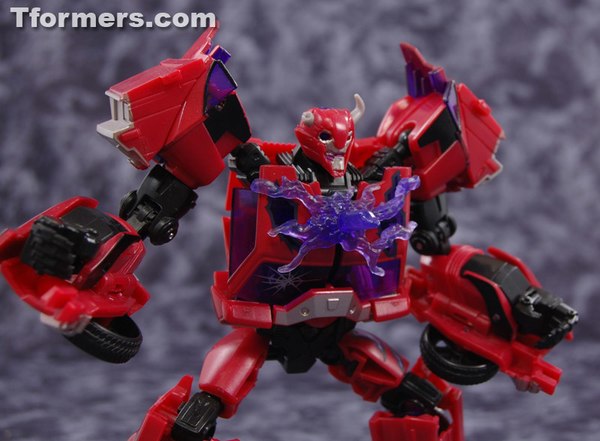 The other piece is a large, straight crystal, intended for use as a club. Sadly despite both ends being tapered to dull points, neither fits all that well in Cliffjumper's 5mm-compatible hands. The best you can do is just wedge it in there and then try not to move the toy too much, since the hold isn't secure at all. It's surprising and disappointing that nobody thought to make sure at least one end was made to be an effective handle. It could have been managed without looking out of place with the rest of the crystal, and would have improved its worth as an accessory considerably. Especially so since neither Dark Energon piece can be used or stored while Cliffjumper is in vehicle mode. 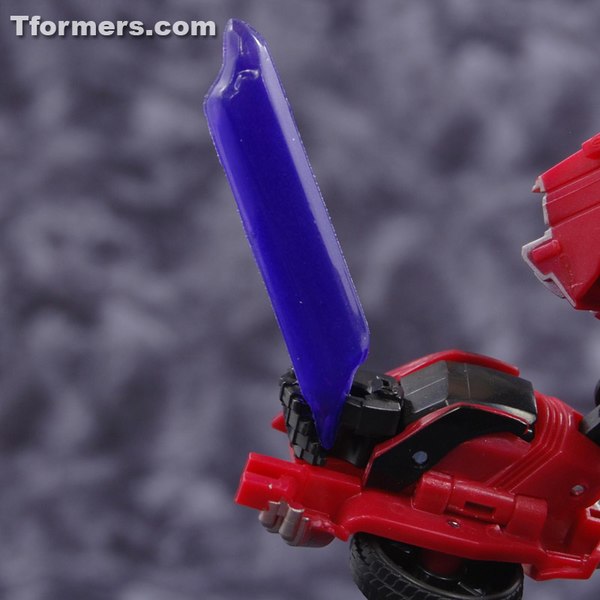 I can certainly appreciate tossing a couple extra bits in to help further distinguish this release and not end up feeling as questionable as SDCC Optimus Prime, but it's regrettable the execution of that did not turn out better. I hope for whatever Hasbro might prepare for next year will still carry on the lesson Cliffjumper is showing. I'm sure it can all be dialed in a little better for the next try.

Cliffjumper sold better than anyone expected following posting on Hasbro Toy Shop. The idea and execution have obviously been well-received already. But since another option will be available later this year, there's no need to worry about missing out on a representation of how Cliffjumper spent the majority of his on-screen time! By far this release will be the best instance of zombified Cliffjumper possible to get. If that is a thing that matters to you, definitely consider getting Rust in Peace because it's a great overall package. If you just want some kind of Terrorcon Cliffjumper though and don't care about the extras you get here, it'll probably be better just to hold out for the Toys R Us version to be released in the US later this year. You won't be losing out on anything essential. Rust In Peace Terrorcon Cliffjumper is Very Good on the Figurereviews.com Non-Numeric Rating Scale. I'm still not sure if I'm sold on this body being repurposed as a G1 Cliffjumper with those Asian releases though. Maybe if it had bigger boots. 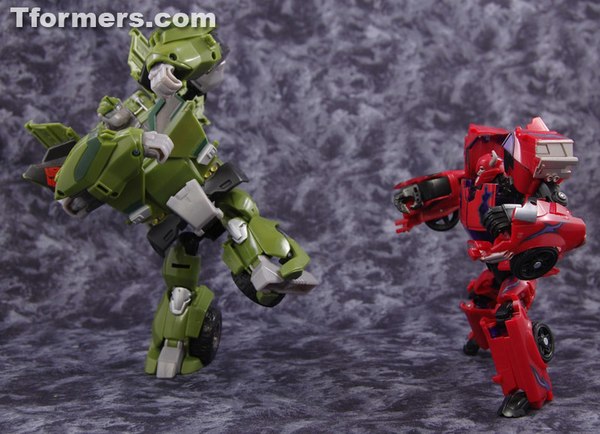