Two years after War For Cybertron, High Moon and Activision have returned to Transformers with Fall of Cybertron, continuing the story of the Autobots and Decepticons' war- and its effects on their home planet. Revising and upgrading the WFC gameplay in many ways, the single-player game offers a much broader variety of gameplay and some spectacular experiences- in the literal sense of the word.

As I'll be covering the Multiplayer gameplay in a separate article, this review focuses on the single-player Campaign Mode.

The story picks up some time after War for Cybertron. After a prologue featuring Bumblebee aboard the Ark, the game flashes back to six Earth days before launch, with the Autobots preparing to launch the Ark and the Decepticons attempting to stop them. The story shifts between characters on the Autobots and Decepticon sides, with each chapter focusing on a different set of characters while leading up to the departure of the Ark from Cybertron. Because the stages are tailored to specific characters, there's no character select or cooperative mode like there was in War for Cybertron. But it's worth the sacrifice to get the variety the game provides.

In terms of presentation, this is what I like to see in video games, especially action games: the story drives the action, but you always feel like an active participant. You move in and out of brief cutscenes very smoothly and sooner than not you're back in control of the game. There are some really fun and funny moments included here, my favorite of which is the end of Chapter 3. And, the game's not afraid to shift player control from one character to the next if it makes the story more interesting. This leads up to the amazing final chapter, "`Til All Are One," which quickly shifts scenes between characters on both sides, leading up to a choice on your part which faction you want to play in the final battle. 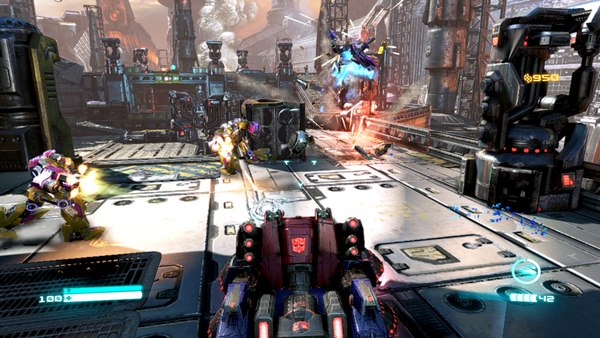 The gameplay has largely been refined from War For Cybertron, keeping what worked well and adding new twists to the gameplay. Naturally the game is largely still an over-the-shoulder third-person shooter, though High Moon is not afraid to change up the format for different characters. (Also, you can now choose which shoulder you're looking over, which is a nice touch and provides tactical advantage shooting around corners.) New one-shot items called T.E.C.H. now occupy two slots on the D-Pad, one for offensive gear and one for support- it's nice to be able to carry a health-regenerating item into particularly difficult battles, for one. Enemies drop Energon Shards, which serve as currency for the Teletraan-1 Store found frequently during the game as well as Armory Recreators, weapons vendors with single specific items. In addition to TECH, you can purchase upgrades for weapons and perks, both of which apply to all characters. That's a smart design choice that doesn't penalize you for the game's frequent narrative shifts.

Controls are good and responsive, and largely forgiving. As with WFC, the option is given to remap the Transform button off of the left stick- and strongly I suggest you take it. I have a nasty tendency to transform at inappropriate moments otherwise. Individual characters feel a lot more like individuals this time, rather than specific builds of the game's four multiplayer classes- there's a tremendous variety to the gameplay this time out. New, unique special abilities are given to most characters, such as Optimus Prime's ability to order airstrikes and Jazz's Grapple Beam which allows him to zip up to various platforms and pull open grates. The game also gives a good sense of weight and scale to all of the characters, from the small and quick Bumblebee up to the lumbering and powerful Bruticus. In terms of pure spectacle, Grimlock and Bruticus are the showstoppers, representing the power behind the characters very well. Also, the Grapple Beam controls far better, much more enjoyably and more forgivingly than the 2009 remake of Bionic Commando.

Level design is well thought-out and serves its purpose very well, even when that purpose is to give you a potential wrong turn or two to navigate around(or in my case, not) during a high-speed escape. Markers are usually given to lead you to your next objective as well as to tell you whether you're trying to reach a certain point or shoot a certain target. I got turned around once or twice, but for the most part you're not going to spend a lot of time lost in this game. There's some fun stuff to hunt for if you go exploring, too: the collectible items in Fall of Cybertron serve a more solid and rewarding purpose than the Autobot and Decepticon symbols of War For Cybertron. Stages include blueprints for upgrading weapons - a solid gameplay benefit - and Audio Logs that help develop the story.

The difficulty is solid even at Normal, enough that you'll need to tread carefully as any normal-sized Transformer. Enemies are smart enough to take cover and try to outflank you. Things are naturally a bit easier for a Dinobot or a Combiner; while it's entirely possible to be killed as one of the larger characters, it's nowhere near as easy as it is for an ordinary Autobot or Decepticon- the game does an excellent job of switching between tense shooter gameplay and fun, all-out rampages.

And when you complete Campaign Mode on the Xbox 360, you get one of two really neat Avatar items depending on which side you choose in the final battle. I won't spoil them, but once I saw what the first one was, I went back to the last chapter immediately to collect the other. 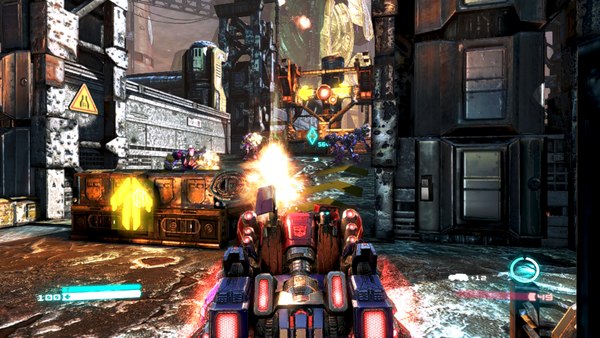 The graphics are sharp and the environments are varied- to go with the variety of the gameplay, no two stages look quite alike. The new Robot Mode designs are just as true to the characters they represent as WFC's, and in many cases the WFC designs have been retained, such as with Bumblebee and Soundwave. Of the new designs, Grimlock's is particularly good, as is the more blocky redesign for Optimus Prime. Vehicle Modes are appropriately alien and unpiloted in appearance. The Cybertron games have a definite aesthetic of their own, one that I feel is well-suited to a video game world. 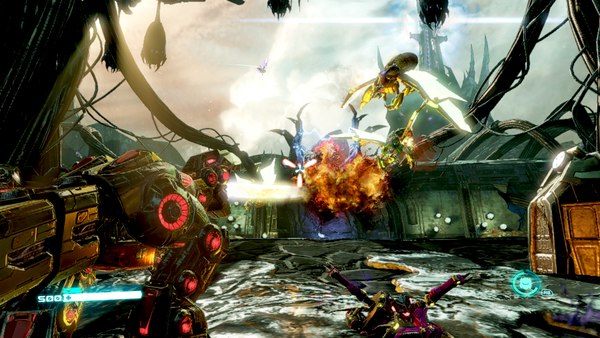 The music definitely embraces the scope of the stages, and goes for a cinematic feel. It complements the action and isn't obtrusive, which is what an action game score should be. The sound effects are just right, and never feel too light or heavy for the amount of damage you're currently doing. And the voice cast does a great job. Peter Cullen here plays the kind of Optimus Prime I wish he'd get to play more often, younger and more action-oriented. He plays well off of Fred Tatasciore's Megatron, trading quips in a way that again feels a lot more like Optimus Prime as I remember him than the wise old man of the films and Transformers Prime. Gregg Berger has returned to Grimlock for the first time since G1, though this version is much different in character than the cartoon Grimlock of the `80s. If anything, he's more like the Marvel Comics incarnation of Grimlock: headstrong, vicious, and chafing at Optimus Prime's authority. Berger plays this all perfectly, so while it's not as nostalgic a performance as Cullen's, it's undeniably a good one. 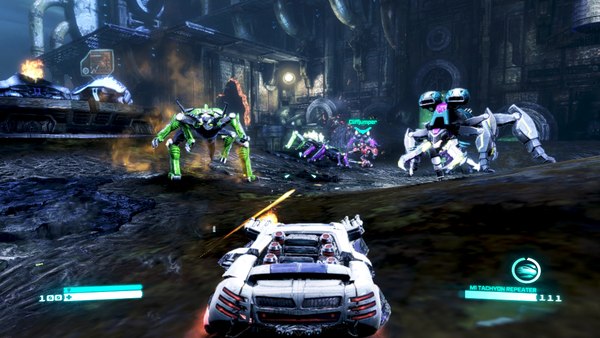 Transformers: Fall of Cybertron's Campaign Mode is a lot of fun, and improves on War For Cybertron's in nearly every respect. The gameplay is varied and entertaining, showing a willingness to throw the shooter mold out the window if it makes for a better and more fun scene. While no one character or gameplay style outstays its welcome, I find myself wanting to spend more time with some of these characters- especially Grimlock. The presentation shows High Moon Studios' affection for the Transformers world and characters, and every design decision has clearly been made in the service of giving the player an enjoyable trip through that world. The end leaves things open for continuation, and it's my hope that ultimately High Moon has the opportunity to make another game that takes us off of Cybertron and out into the universe. It is an Excellent game, rating a 9/10. 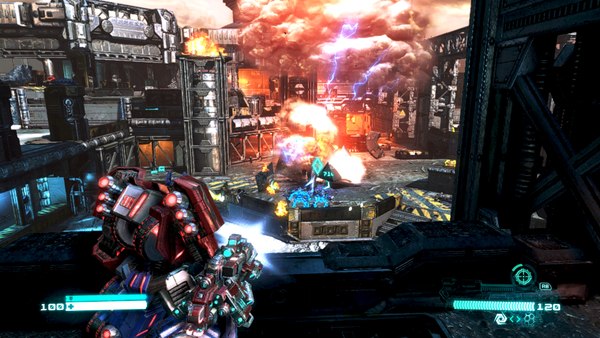