Last time, I covered Fall of Cybertron's Campaign Mode- and satisfying as that is, one of the big draws of War For Cybertron was its multiplayer. That draw hasn't changed and. like the main game, Fall of Cybertron's multiplayer has seen a lot of refinements, both small and large. First off, I'll cover the Multiplayer section and its four modes, followed by Escalation.

The four character classes of War For Cybertron remain, though everything has been tweaked considerably. Scientists have retained their title, but the Scout, Soldier, and Leader classes are now known as Infiltrator, Titan, and Destroyer, respectively. The classes perform the same roles, but have changed their capabilities to varying degrees. The Infiltrator can still cloak, or can pitch EMP grenades that slow the enemy and render them more vulnerable, and the emphasis is still on avoiding head-to-head conflict. The Destroyer is pretty good at head-to-head conflict, and has the choice between a Diffraction Barrier that blocks enemy fire(but not your own), and the Hover ability which now has a much-needed ground-pounding finisher. Titans are still biggest, toughest and slowest. They've kept their Whirlwind ability, the windup for which has been shortened slightly, or you can use a Flak Shield, giving a good choice between offensive or defensive skills. The Scientist has kept his Sentry, and the Heal Beam, which was previously a weapon, is now a special ability. His focus is still on support and long-range or aerial combat. 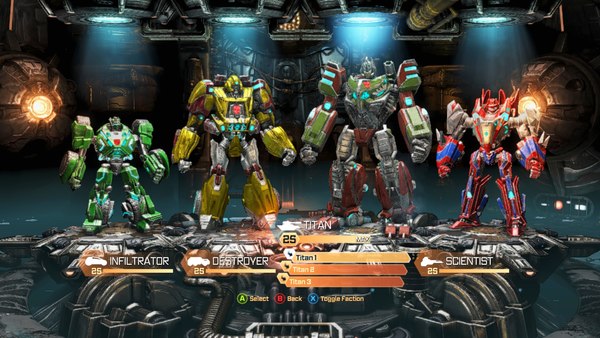 Each class once again has a unique weapons loadout, which has become a more important decision than ever since downed characters no longer drop their active weapon- whatever you bring into the game is what you keep. Weapons and skills have enhancements which unlock as your character levels up, increasing damage, giving bonuses to the Scientist for healing his teammates, adding supplemental abilities like setting the enemy on fire, or extending magazine capacity. All of those abilities provide definite bonuses, but not enough so that in the hands of an unskilled player a max-level character would become invincible (I can vouch for this).

Body selection also varies by class, and there's a healthy supply of mix and match parts available. Most are unlocked by spending the Energon Shards you get at the end of every multiplayer round, though some sets (like Wheeljack and Ultra Magnus) are available as DLC for real-world money. Others still can only be unlocked by entering Prime Mode, the epic-level expansion of the Multiplayer game. The parts correspond to specific character models, and the ones purchased with Energon Shards can be bought piecemeal or in sets. Torso models determine what your Vehicle Mode will look like. While there isn't a Dinobot class- and after playing Grimlock you can see why, it would unbalance the game terribly -you can purchase Dinobot heads for your robot mode, which is a neat touch. There are a lot of distinctive parts here to play with, and it really makes you feel like you've built a Transformer all your own. There's a large number of preset color combinations, which are slightly different for Autobots and Decepticons. If you want, say, Constructicon colors or Insecticon colors, they're there! You can even select exactly how metallic your Transformer looks, and one of three voices. And if you'd like to make different bodies to use as Autobot or Decepticon, you unlock slots for up to three separate character builds, so you can pick which one to use depending on which side you're on this round.

As with the Campaign Mode, gameplay is a refinement of War For Cybertron's multiplayer. Every character can dash and air-dash now, as well as sprint if the dash button is held. The grenades have been swapped out for the View Change button that helps you shoot around corners. Items- like the Intercooler that speeds up your ability recharge -are now pickups scattered across the stage, which is a change I quite like. When a team was already doing well enough to get ridiculously long kill streaks, the special bonus items came to feel like salt in a wound when you were on the receiving end. 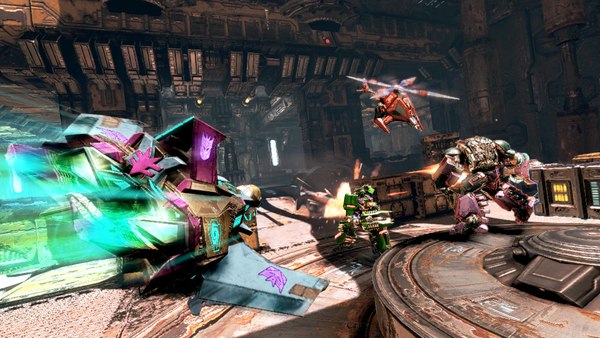 Stages are varied from wide-open and vast to more compact in feel, forcing you to think about your surroundings carefully when you get into a firefight. (And also which map to vote for in the next round based on which class you'd like to play.) The controls are pretty similar to what's in Campaign Mode, and again I'm glad I'm able to switch the Change Form button off of the left stick- I never can keep from pressing that, especially when I'm ambushed. There's a neat feature where you can choose team member's names (and robot backlighting!) to always be blue for your team and red for the enemy, or red for Autobots and purple for Decepticons for traditionalists. I prefer the latter, but when I made the switch it threw me- I was used to enemies being red, and first time out I was an Autobot. Overall everything feels tight, and the most important aspect of a good multiplayer game is there: when I'm killed, I am pretty certain it's the other guy's skill (or my lack of it) and not any design issue or quirk of the game's.

There are four Multiplayer modes to play, with the two most popular- Team Deathmatch and Conquest -returning from War for Cybertron. Team Deathmatch is still the go-to mode, with the nice, straightforward goal of being the first team to get 40 kills. Conquest remains my personal favorite: three Energon Nodes are spread across the stage, and each team vies for control of them. Holding a Node gains points for your team, and the first team to 300 points wins. It's a good mode for starting players, since it's possible to gain XP for helping to capture Energon Nodes whether you're a really good shot or not. Capture the Flag is the age-old wargame: you defend your flag while capturing the enemy flag, and are scored a point whenever both flags are in your base at the same time. It's a game that's best suited to a larger group- with the minimum of four players it just feels a little slow. Finally there's Head Hunter where you kill enemies and collect their sparks, and bring them to a Collection Node to score points. The Nodes move in order to discourage camping, and of course if you get jumped on the way back the enemy gets all the sparks you've been carrying, and yours.

Last but not least, there's Escalation, the survival mode from WFC. For those who'd like to continue playing the existing Transformers in multiplayer, or who miss the co-op Campaign Mode, this is the place to go: you get a choice of one of four Autobots or Decepticons who fulfill specific roles that are similar but not quite matching to the multiplayer classes. Characters not playable (or in some cases not even seen) in Campaign Mode like Wheeljack, Perceptor and Shockwave are available here, and fulfill certain preset roles such as launching a Sentry, healing teammates, or deploying an Ammo Beacon to keep weapons firing.

Those last two are very important abilities, because every pickup in Escalation costs. You collect Energon Shards for killing enemies and completing waves- and the totals are separate in Campaign, Multiplayer and Escalation modes, FYI -and there is ammo, Energon, and new weapons to buy. Also, the team can go in together on the cost of upgrading their weapons, open caches of new equipment to buy, or even trigger deathtraps to destroy the enemy hordes.

Gameplay is more like Campaign than Multiplayer mode in some ways. Most notably, the weapons are once again broken down into Regular and Heavy Weapons with separate ammo pickups for each. Another twist not seen in the other modes is that when you lose all health, you collapse and can continue firing until a timer counts down and you die. If a teammate can reach you safely, you can be revived either by the teammate holding a button (and leaving themselves open to attack) or by the team Medic using their Heal Ray on you, which is much faster. Teamwork is key here- sticking together and understanding how best to use your character will keep you all alive. While there's more to using a Medic, for instance, than just healing the team, keeping the hardier `bots' shields and health refreshed will in turn keep you alive. The areas you pay to open tend to be more defensible things like balconies, so there's a benefit above and beyond more things to buy later.

There are fifteen waves of enemies, each one greater in number and power than the last. If your team gets wiped out, you restart the wave- you have three collective "lives" for the team before game over. Players can join after the game has begun, but have to wait until a wave is over one way or the other. Players who are killed will also be respawned if the wave is cleared. Also, and most impressively, each individual player sets their own difficulty level, meaning that if you have one player who's less experienced than the rest he's less likely to bring the team down. It's a neat addition, and a good compromise for those who want multiplayer with established characters- you can choose a character here, so that when you get to Multiplayer you're not in a room with sixteen Optimus Primes.

Though they share common graphics and controls, the Campaign and Multiplayer modes for Transformers: Fall of Cybertron are really different animals. Er, robots. The multiplayer side suffers a bit in direct comparison, because the best and flashiest parts of the Campaign would be impossible to balance in competitive play. But setting that aside and looking at it as its own animal, Fall of Cybertron improves on the original almost as much as the single-player game- just in different and more subtle ways. There's no way to see how well the game has been balanced except to see what the community does with it in the long run, but even in the short term the game feels less frustrating to new players while still rewarding those more experienced. And if you'd prefer something more collaborative, you've got Escalation, which should provide a lot of fun and a healthy challenge. The Multiplayer, like the Campaign, is Excellent, earning a 9/10.