In 1987 when the toyline for The Headmasters began incorporating Targetmaster toys, the existing character remolds used in the Hasbro line were skipped over. But two of those partner robots were still pressed in to use, now with different Transformers. Stepper represented one of the earliest Japanese exclusive Transformers, and for collectors in other parts of the world stood in the ranks of typically unobtainable Japanese G1 rarities. Until 2004, when it was included in the G1 reissue lines in both Japan and North America, and then a year or so later when Ricochet could be had on clearance for about $10.

Demonstrating amazing creativity in toy deco, Stepper was mainly a color inversion of Jazz, swapping black and white. But it has a certain charm, and unsurprisingly was the first thing a lot of people expected from RTS Jazz. But nobody figured it would be a mailaway exclusive to a Japanese Transformers toy book and so really bloody expensive to import. What an awful reversal from the reissue that had to be practically given away in some cases. 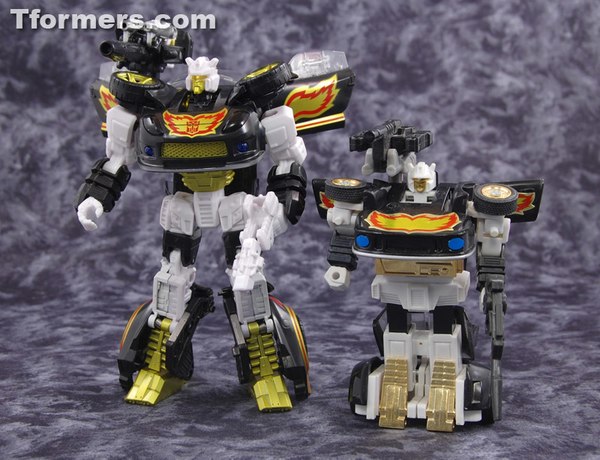 The black body really suits the mold's vehicle mode, much like it was on Botcon Kick-Off. Of course this time the black is much more dominant. The deco emulates the stickers from the original Stepper which combined some elements from Jazz with new flame decals. So United Stepper keeps Jazz's racing stripes along the bottom of the doors and over the rear wheels, but has no rally markings. The flames are very similar to the original sticker designs, although because of how various panels make up the hood, the tampographed flame on the hood is actually smaller than the original's hood sticker!

One thing the Hasbro release of Jazz lacked was certain areas of paint, but of course no such problem is found on Stepper. The rear window is painted silver as the best match for the colorless clear windshield and side windows, tail lights are painted, and hubcaps colored in gold to really stand out from the rest of the black car. One part of the deco I really enjoy is a stripe of clear gold paint at the top of the windshield that you barely notice until it catches the light a certain way, like the tint strips most real cars have along the top of their windshields. It's a really pretty effect here, and something I never would have thought to use clear paint colors for even though it now seems so obvious to me.

All of this toy's clear plastic is molded colorless, but the foglights and headlights have been painted over to provide colors. The headlights are painted in black, probably to try to make them blend in to the hood and make like the fog lights are the actual headlights. Those are covered in a clear blue, but a blue so dark that they look almost black except in direct light or carefully angled backlighting.

Stepper's vehicle mode is just really nice to look at; the black plastic and metallic paint applications give it a certain quality absent in the Hasbro release of Jazz. While I'm not usually one to harp on Hasbro's budget constraints, Stepper just has a more "finished" appearance compared to Jazz. It may even be so versus United Jazz, but I don't have one of those to compare against. Whatever it is, this mold seems to be really happy when cast in black, and that's just fine with me! 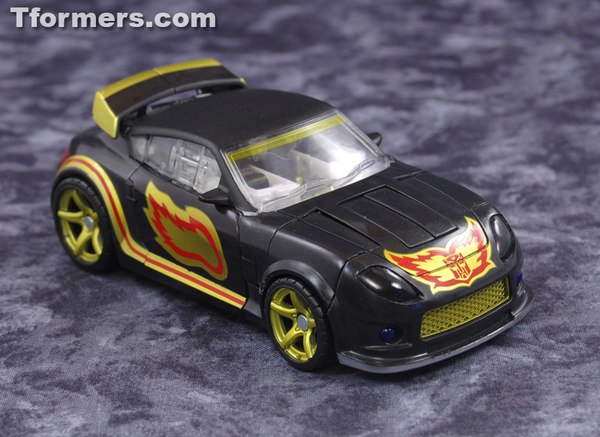 Every time I get another instance of this mold, I learn all over again how fun it is to transform, because on the large part it will all work itself out if you just let it. It's this perfectly smooth flow from point to point as the car uncurls in to a robot without multiple parts needing to occupy the same space. It does so much with so few movements and I'm always really impressed with it. 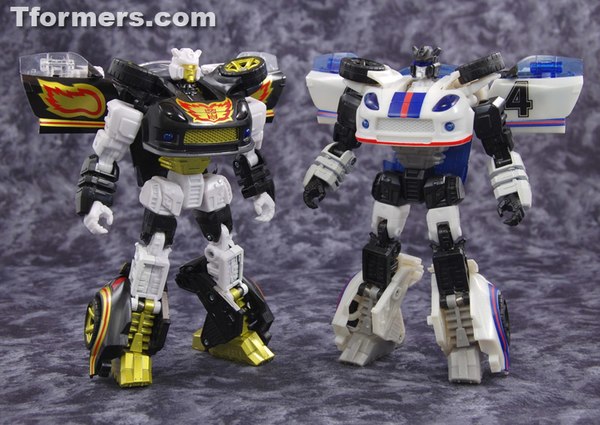 So hey. Color-inverted Jazz. Mostly, anyway. Parts that were grey or silver are gold now, like the ankles, abdomen and face. Most of the gold parts are cast in a gold-ish yellow plastic, but everything is coated in shiny gold paint. The torso components looks like they were just straight up dipped in paint, since I can't find a spot of bare plastic anywhere on them. Stepper's visor is painted over with a thin coat of the clear gold, but the coloring is so pale that it looks like it's just picking up the color of the face below. The net effect is to make the visor look *more* colorless than if it had just been left alone. It's really too bad the visor couldn't have been gold chromed, which would have preserved the appearance of the original toy having gold visor and face, while making the visor both plainly colored and visually distinct from the face. One other problem area for the deco is on the knees. I explained this in the review of Kick-Off, that the toy's knees are split in half between parts trees. Sadly, where Kickoff and Jazz are both lucky enough to get to cover that with black paint, Stepper requires white. The match between paint and plastic is ...well, to even describe it as a match is misleading. The only alternative I can see would have been to paint dip the lower leg piece from the white sprue so the knees could match and no painted white surfaces would be directly adjacent to any white plastic, minimizing the problem at least.

That sore thumb aside, it makes a nice looking robot. But then, it's really hard to make this toy look bad. Every deco I see it in makes it look nicer than the last, and even though it's only a very simple redeco, Stepper is no exception to that. Switching parts from dark to light and vice-versa helps shapes and details play differently, helping to give Stepper a more distinct appearance even while wearing the same body as three or four other dudes. Sculpted detail is something I've always found to be pulled off well with this mold, as it contrasts between the smooth vehicle panels and the very mechanically oriented molding of the robot elements. The new plastic colors haven't hurt the way the toy works either, with all the joints being pretty much spot-on perfect in terms of tightness and weight-bearing. Unfortunately the downside is that once again you can't expect any help for the chest to not flip up when you try to pose an arm. Always one flaw to blemish an otherwise perfect toy... 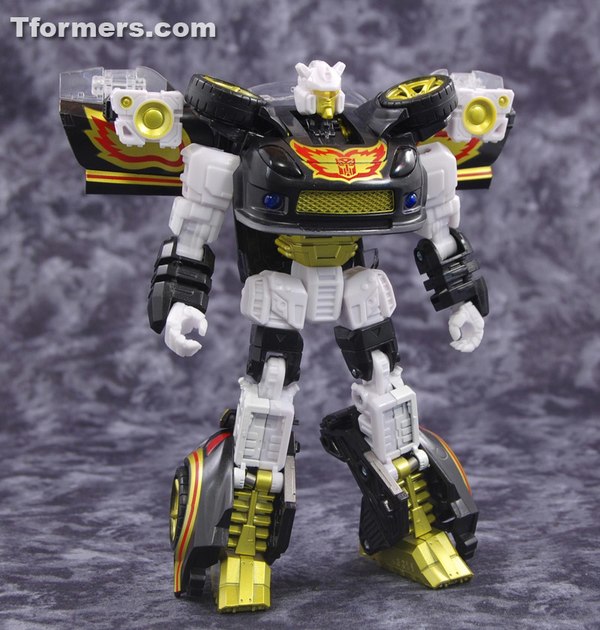 Stepper's speakers and gun follow the same coloring pattern as the rest of the toy, reversing the colors from Jazz's instances, but making the speaker membranes themselves gold instead of the original silver. Bling speakers, yo. They're functionally no different than on the other uses of the mold, so any of the deployment or gun buildup stages can be accomplished here. 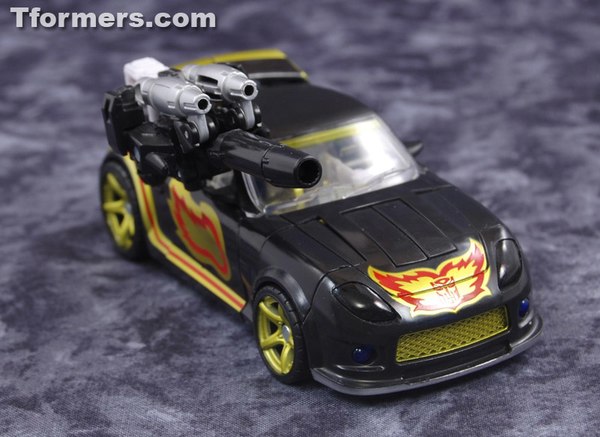 Nebulon is the important accessory in this case. Of course it's the same Nightstick mold that has come with every use of Universe Cyclonus so far - I have a sizable group of these at this point. It manages a unique color layout, which is very impressive when so many reuses exist already. Nebulon can naturally be hand-held in robot mode, but has no accommodation in vehicle mode. A pity that a 5mm port couldn't have been added to one of the spoiler halves, especially as it wouldn't interfere with the robot mode. But, one happy accident helps solve that problem, and gives the robot a little more accuracy to the original toy. The bottom edge of the speakers have a channel that's a perfect fit for the small tab at the back of Nebulon's gun mode. The speaker can be deployed and Nebulon plugged in to be equipped for Stepper's vehicle mode, or to be used as an over-the-shoulder cannon in robot mode. The original Stepper had a special bracket piece to do this, since that toy lacked a 5mm compatible fist to hold its Targetmaster, so it's kind of fun to find a way to recreate that in the new toy. 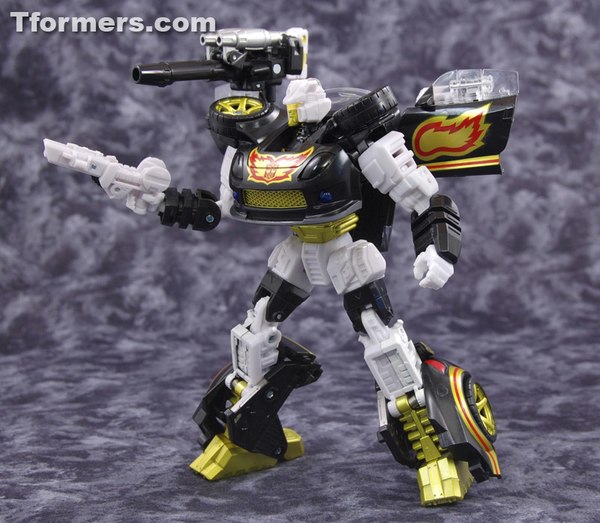 The $100 or so this can reach right now may be a hard pill to take. I picked this up while at Botcon, and I can say for sure if not for that I'd probably still be trying to talk myself in to it even having such a love for this mold. With Artfire coming up now at the end of this year, give or take, it's probably time to make that decision for yourself. I'm not disappointed with my purchase. Just like the Botcon toys (and Wheelie now) it's a nice new look at a mold that I personally can't get enough of. Stepper is Excellent all day long in the Figurereviews.com Non-Numeric Rating. The only flaw in the toy is a matter of some paint, which can be user corrected if it really bothers you that much. Hard for me to ask for better than that. 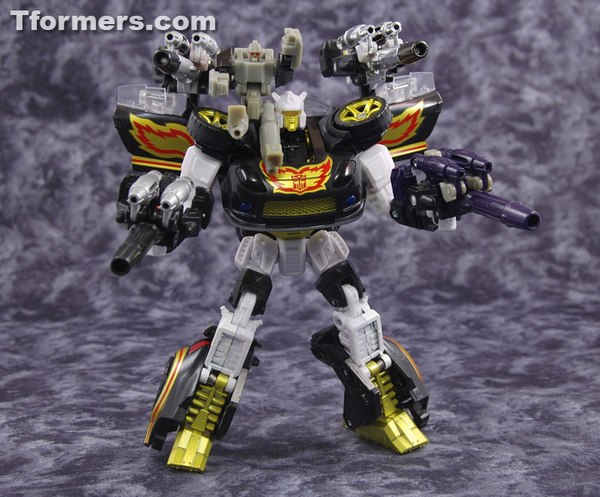