Onslaught believes precision and planning are the keys to success. He spends hours devising battle plans, considering contingencies, and deliberating troop disposition before ever committing his forces to battle. Once the fight is joined, however, no robot is a fiercer fighter.

The first in the series of five Combaticons, I don't know if Onslaught specifically has been much anticipated, but he kicks off what is for sure one of the most looked forward to groups of 2012's retail Transformers product. Onslaught has the greatest burden on his shoulders - literally. It's easy to anticipate bad results when a figure is responsible for becoming the backbone of a bigger structure, but the actual sacrifices may not be as severe as you expect in practice... 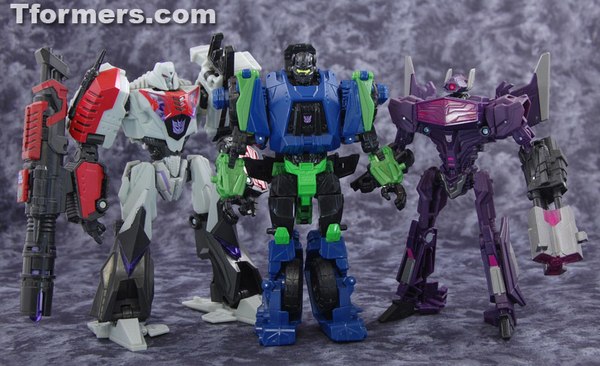 Onslaught's robot mode is thankfully a lot more "put together" looking than the vehicle mode, making it so it really feels that of the three forms the toy can assume, the vehicle was last on the list and really treated like an after thought.

Onslaught has some bright green to help break up the dark blue and black comprising the majority of the color layout, just enough for contrast. It's actually a really nice shade of blue, very pleasing to look at. In comparison to the very bright, saturated green paint, it's just muted enough to offset it and keep everything visually calm.

The build of the robot is big and blocky enough to look powerful, but doesn't push it farther in to the hulking, apeish proportions in the game design. I for one am quite thankful for that approach. Onslaught has little in the way of particular tech or machiney detail sculpting, as it's mainly a matter of confluences of panel lines left to make him look physically complex. A notable exception is inside the hollow of the thigh where a ridged surface is visible over the knee joint, certainly intended to represent part of the inner structure of the joint. There's a lot of sculpted detail on the face and head, probably more so than there was on the much larger Universe Onslaught. 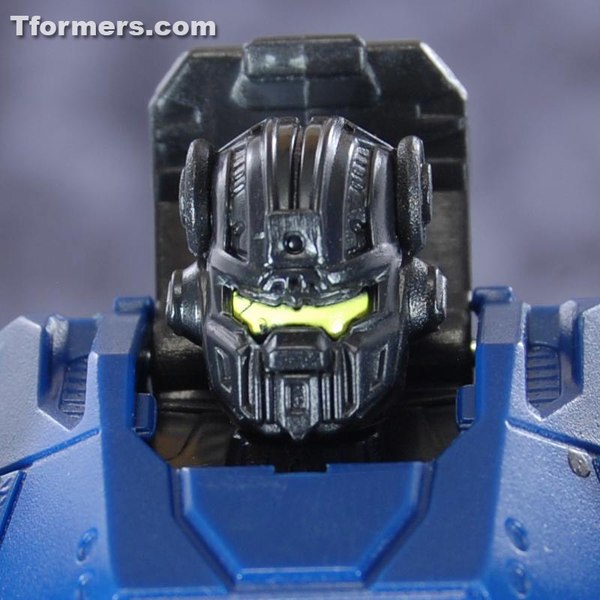 Poseability has had to take a little bit of a backseat to the needs of holding up Bruticus. The shoulders are only swivel joints, and outward motion is at best vaguely simulated by part of the elbow structure. The elbows themselves are "soft ratchet" joints, and on my example the left elbow is very stiff. Without some care taken, it will dislodge the ball joint before the elbow actually bends. It in fact took some work just to get it moving at first. And pliers. You may not experience this, but be aware of the possibility, and if you do end up with a stuck elbow, don't try to articulate it by applying pressure against the ball stem. That can only lead to bad things. The unusual way the elbows are built and jointed for transformation does have the side benefit of letting you bring the forearms near to center body mass, which is really good for some weapon poses.

The legs have a typical range of joints present, but seriously crank up the joint strength. A few people incorrectly assumed Onslaught lacked forward hip movement because of how difficult it was to move the joint, and I'm not surprised they were fooled. It really does feel at first that something will break before the leg will move. The joints work pretty normally and easily aside from that. The knee only has about 90 degrees of bend, but would get little more than that anyway thanks to the combiner ports being where they are. It's just so hard to move the hips forward that the knee joint is not a whole lot of use. The feet are big and square, and so even without an ankle, many standing poses are quite stable, even standing on one foot is not difficult. 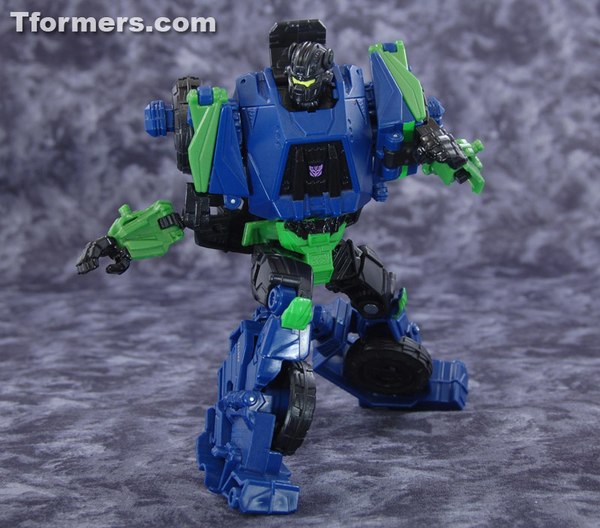 Onslaught does have a waist swivel, but if you tab in the combiner pelvis piece as its meant to go in robot mode, it's going to effectively lock that swivel joint. If you move that out of the way, you risk blocking leg movement. But since that is itself mostly a foregone conclusion, it might not be a bad idea. Just remember it'll be less stable. The neck is a ball joint, though very restricted so it acts mainly like a swivel joint. You can make Onslaught look slightly down if you want, though.

Onslaught has a really nice looking robot mode. The only drawback is that concessions for a more perfect union means Onslaught will spend most of his solo time standing straight up and looking stiff. The hip joints may loosen over time if you work with them, but you still have to consider that doing so would probably weaken Bruticus. I guess if Onslaught's primary role is strategy and planning over direct engagement, this works well enough. Plus, if the toy has to just stand looking like a statue, at least it's a nice looking statue. 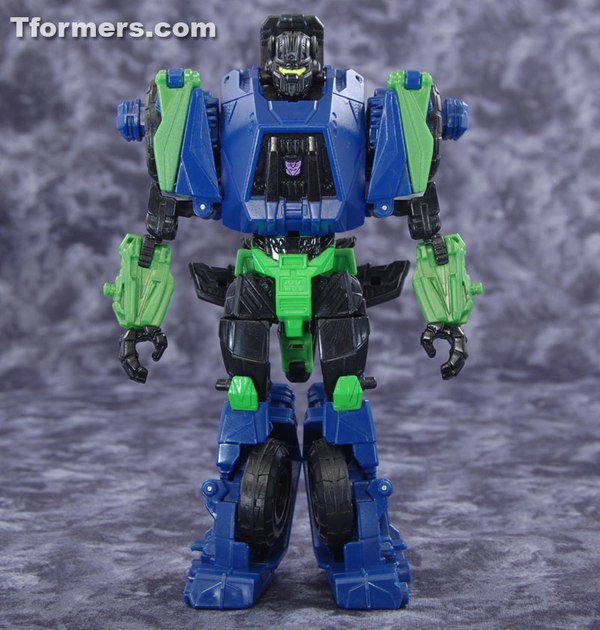 Going to vehicle mode is a pretty simple matter, and is to a point similar to converting in to torso mode, really only varying in disposition of the arms and a waist swivel. In either case, the process is not at all complex and can be done in a matter of moments. The shin flip move between robot and other modes is also oddly satisfying and fun for what is so simple an action.

While the game model resembles something like an APC or armored car, the toy fares less well. Lacking enough parts or mass to accommodate it, the rear half is kind of abbreviated. Actually, there's a certain resemblance to Kup in looking like a stubbly pickup truck with no gate across the bed. Mind, Onslaught also has no floor in his truck bed. In terms of execution, Onslaught probably suffers the most in vehicle mode for everything the toy is required to eventually do. It's small, indistinct, and looks physically incomplete. The hands ride along the roof of the forward section, and the head of Bruticus lies barely at all concealed at the very center of the vehicle structure. The arms can be hidden slightly when the cannon is attached, but that makes its own new problems, both in being difficult to properly attach and once it is connected it can only aim downward. The difficulty in attaching comes from having to peg on the the arms. But since the arms don't really fasten to anything for vehicle mode, more likely the needed pegs will not be aligned or even close enough to each other to easily snap down the cannon on them. Be careful in trying to hook it up, too. I've generated a lot of stress marks already trying to fix it in place. 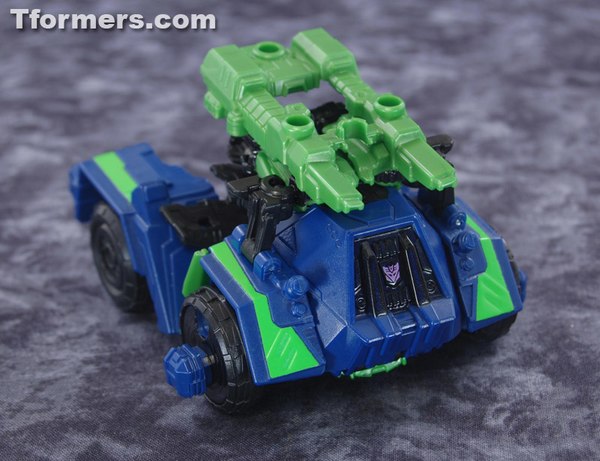 To accommodate the combiner shoulder joints, Onslaught's front wheels don't spin normally, having just the treaded "tire" surface movable. But as it typical of such arrangements, it spins very poorly and will tend to want to drag more than it does roll. The rear wheels spin freely, but thanks to the front pair, sending the toy rolling is pretty much out of the question. Actually, the best aspect of the vehicle mode is also thanks to the needs of the combined form, in that it is structurally very stable. Most of it locks together firmly, and once the cannon is involved, even the arms are more or less secured in place. I just wish it didn't have to look so unfinished. 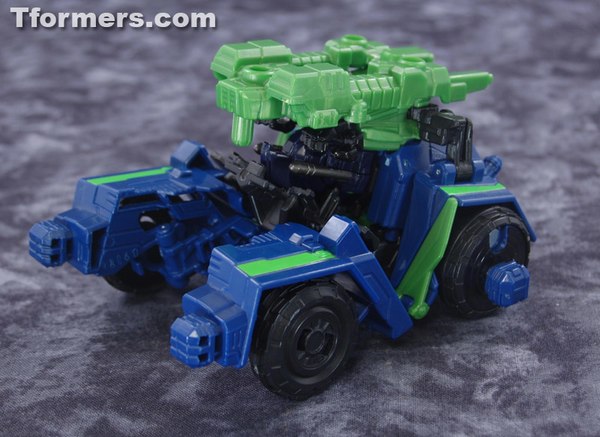 Onslaught's gun is kind of a shell. The top surface is mildly detailed, though broken up by several 5mm peg holes, but the underside is all hollow and empty. It looks like if you took the casing off a toy gun and decided to just walk around carrying half the empty gun form.

I've noted already its interaction with the vehicle mode. Unfortunately no storage option exists for the gun in robot mode, so it must be carried or set aside. It's a smooth fit in either hand, at least. But despite it weighing next to nothing, it gives the elbow ball joints a little trouble if they have to bear its weight alone. The gun does serve an important role in forming Bruticus, which I'll get to when I talk about the combined form itself. But this job is not as a piece to plug more weapons on to.

In any case, this weapon all by itself is pretty disappointing, and obviously suffers for the fact that it's really just meant to work with other pieces rather than being really good at being a gun by itself. 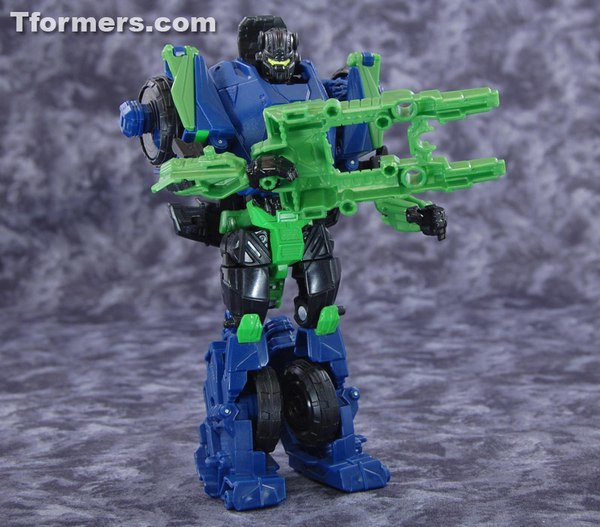 I suppose if any one unit should suffer, it'd be the one forming the core of the combiner body. But the fact is, there's not a lot to try to forgive on Onslaught. Most of the expected articulation is actually there, even if difficult to utilize, and the one element you might see as being kind of limited doesn't strike me as being any problem for the toy. No, all I have issue with is how poorly the vehicle form ended up being regarded in the overall shake of the toy. And even that I think is the right choice if that choice had to be made. Maybe that's why I came out so harsh against the gun, since it's the last thing I can rely on that I can't even grudgingly find validation for its faults.

This Onslaught doesn't have me in any rush to go sell my Universe version any time soon, but it's a nice figure in its own right. Certainly it bodes well for his G2 self - plus Impactor next year. Onslaught scores Good on the Figurereviews.com Non-Numeric Rating, and I might even be tempted to bump it up a little more if it had a Mechtech or other alternative weapon like Impactor is planned to. But all in all, not a bad way to kick off this set. 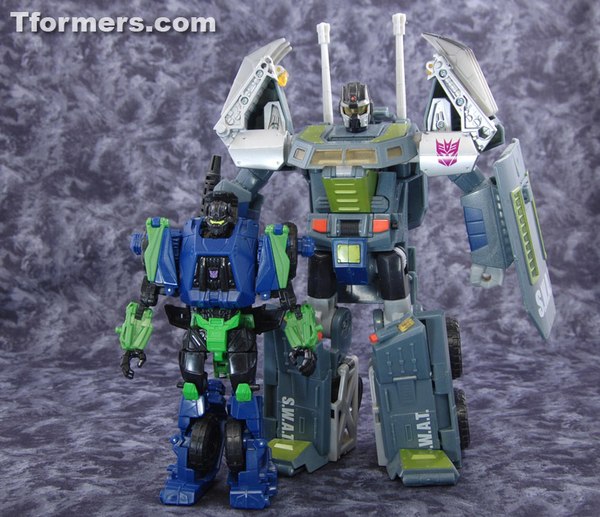 You Can Order Onslaught Now at BigBadToyStore.com