Robots In Disguise's annual tells two stories, jumping between the present where the search and rescue effort for the missing Ironhide and Dinobots leads to a major discovery in the wilderness, and the distant past following Nova Prime making his own discovery that eventually drives him down the path that leads to his fall to the Dead Universe. Written by John Barber, primary art by Brendan Cahill, and flashback art by Guido Guidi. 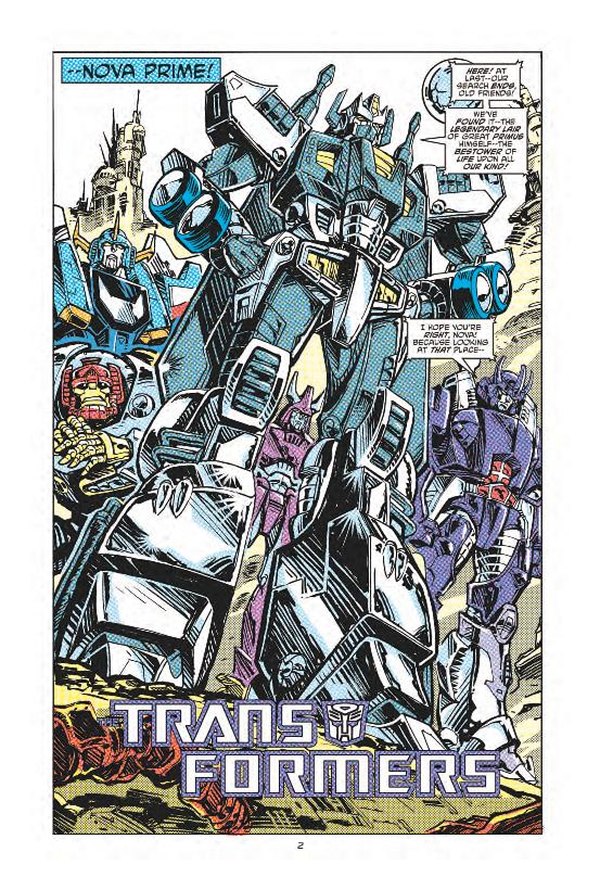 The book leads with the introduction to the flashback period, in a fantastic homage to the first issue of Marvel's G1 book executed by Guido. His talent for emulating existing styles while bringing his own artistic skill in to play is nothing short of amazing, and we are treated to around half of this book being done by him. The brief origin flashback in the MTMTE annual can easily be seen as an appetizer for the main course presented in this book, and anyone looking for more of that retro style will have no reason to be disappointed with this book. Plus besides the visual style, there's one other really special homage to Marvel #1 included that I definitely don't want to spoil for you. Believe me, it's impossible to miss and it's so much better experienced first hand. Cahill's art on the present day storyline is a slight departure from the standard series art, but not anything like the disparity between MTMTE's annual and regular issues. Art in the present stands in distinct contrast of style and coloring to the flashback period, and the two stories interspersed as they unfold through the issue make a great mechanism of back and forth.

Both stories are established with narrative monologues, the flashback by Dai Atlas, and the present by Metalhawk, although that was not very clear to me until the end of the issue. In the past, we see a sequence spread over a great deal of time showing Nova Prime's slide toward aggression and self-supremacy after discovering artifacts of Primus and the Guiding Hand. Nova gradually pushed Dai Atlas from his inner circle as their philosophical differences became more pronounced. While this sowed the seeds in Dai Atlas, Omega Supreme showed him the means that he would eventually use to leave Cybertron with those of similar minds to form the Circle of Light later. The present storyline follows on from More Than Meets The Eye's annual, as the Metrotitan the Lost Light crew helped rescue has succeeded in returning to Cybertron, but in doing so has destabilized and threatens the fabric of the local reality. The Autobots try to keep the discovery secret, even from Metalhawk and Starscream. But it is not long before word has spread beyond Autobot control, increasing the danger as sunset, and the potentially cataclysmic death of the Metrotitan draw ever closer. Through the events of this half of the story, the building political situation again escalates, as Starscream receives an "endorsement" that might bring him support should the leadership elections occur, and Metalhawk finds his own purpose in the belief that the planet needs him to find the right path in to the new future - also aided to a degree by Omega Supreme.

The annual used its unique position to look at a branch of the ongoing story that may not have been able to be so fully executed within the normal run of the book, and it's good development to have Starscream and Metalhawk find their own validations in the goal of taking on leadership, and in doing highlight key differences between them: Metalhawk's validation is internal, and his own, finally seeing that there is a need for him to achieve the leadership of Cybertron, while Starscream's validation comes from the outside now that many will see him as having a potentially divine claim on the position. And if this were a typical Transformers story, it would be easy to see it with a cynical gaze and that Starscream would exploit his way in to office and resume a new Decepticon-led warrior state. But this is far from typical fiction, and even if it came to pass that Starscream attained leadership, I don't believe that outcome would play like anyone would expect.

The flashback to me is delicious, delicious frosting on an already tasty cake, but it also helps fill in some of the blanks leading to this point and in a way points to a similar situation where the united Cybertron of the far past descended to factionalization and tyranny. Omega Supreme's presence at both time frames provides the observer who can all-too-clearly see the same patterns happen again and again. And while powerless to change things himself, his conversation with Metalhawk was able to stir the realization in one who may be able to affect that change. And Omega's clash with Monstructor in the past may well serve as another point of reflection later on, depending how the storyline with the Aerialbots progresses.

I do hope that storyline will be picked back up with the next regular issue, but at the same time I'm even more eager to see how the political situation evolves after the events of this issue. And I never really imagined there would be a point that I would either have the opportunity to consider an ongoing political plot line in a Transformers book, or that I would actually look forward to its development over an extended period. These are strange times of Transformers comic books, and I can't properly express how much I enjoy the place we're at now.