Four million years in the past, the separate lives of many Autobots to-be converge in "Shadowplay: A Totally Epic Story Based On Real Events That Definitely Happened(Part 1: Post Hoc)." Script by James Roberts, art by Alex Milne, color by Josh Burcham, and lettering by Chris Mowry. 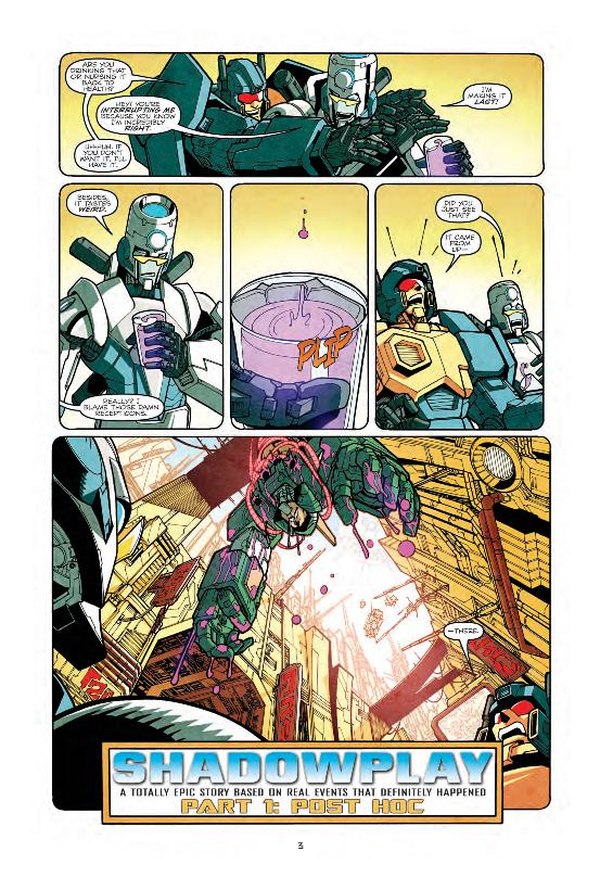 I think I'd get a new drink if I were you, Quark.

The issue opens on a scene in the distant past, before the War, as Nightbeat and a friend have their political discussion interrupted by the discovery of a dead body. Fast-forwarding to the present and the Lost Light, Rewind calls a gathering of Autobots to help fix Rung's brain after his accident in issue #6. Rung has to make a series of neural connections in order to regain function, and the best way to do that is for him to listen to a story and fill in the gaps. So Rewind enlists the rest of the Autobots present to tell "A Totally Epic Story Based On Real Events That Definitely Happened." The corpse from the prologue is that of a pre-war senator, and the story of his death connects the Autobots to one another, and to Orion Pax...

This is my first regular issue of MTMTE- having previously only read the spectacular Annual -and it's a good place to start. While it clearly has roots in previous issues, everything you absolutely need to know is explained on the title page, and the book itself is the beginning of a new story arc set long before current events, which makes it pretty accessible. The story hook of making connections works just as well for the reader as it does for Rung- we get a number of different pictures of the state of Cybertron before the war, and I'm really looking forward to how they all come together.

I've had a lot of people tell me that MTMTE is not just the best Transformers comic running currently, but the best comic period. And after reading the recent annual and this issue, I believe them. James Roberts manages not just individual characters with unique personalities, motivations and voices - a skill which on its own would be noteworthy - but actually makes them fun and likeable! And he seems to have a very clear handle on where he's taking a very complex story. I'll have to reserve judgment until it's all done, but the way things are handled so far gives me confidence no threads will be left dangling at the end. Paired with that, we have Alex Milne's art, and he is more than up to doing this story justice. He has the quality I appreciate most in a Transformers artist: the ability to make the robots look like robots, but still look alive. Many artists will make them look either too stiff or too human, and this is just right. He's got just as good a handle on the characters as Roberts, and draws some great, expressive faces. If anything I'd say the character design verges on too much detail, but that's a matter of personal taste- the art is never unclear or muddy and never confusing. And I'm particularly fond of the G1 instruction manual references on one page.

While it's not a perfect starting point, it's definitely a good one- and an amazing comic, more importantly. It's got great art, great writing, it's a lot of fun, and it'll make you want the next issue. If there's more a comic is supposed to do, I don't know it.