Blast Off disguises the horrible loneliness he feels behind utter contempt for anyone who can't reach orbit under their own power. From his isolated position in orbit, he can fry any Autobots his comrades designate with powerful X-ray lasers, or descend to join his fellows in forming the mighty Decepticon Bruticus.

I've taken an appreciation over the years for spaceship Transformers. I think Armada Tidal Wave and his Super Dimensional Fortress-style super battleship mode really locked that in for me and ever since I've been on the look out for toys that were or could be seen as interesting space vehicles if you just squint and tilt your head a little. And as ships go, Blast Off is certainly one of the more interesting designs to come along lately. Even more convenient given he's part of a full team set I needed to get anyway. 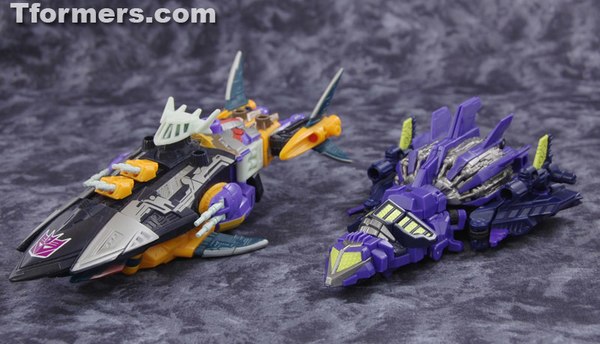 It's important to note before anything else that Blast Off requires immediate modifications for the toy's own safety. Thankfully they're pretty simple. There are tabs that hold Blast Off's shoulders up, but they're longer than needed to do the job, and become very difficult and stressy to insert or remove. You'll need to shorten them a little bit at a time just until the shoulder can be tabbed in or out comfortably. Be careful not to trim too much though or there won't be enough left to hold the shoulders up at all. If this step isn't performed, either the tabs or the grooves they fit in will break eventually.

That out of the way, Blast Off makes a nice figure. The general look is pretty cool, the big shoulderpads especially giving a distinctive appearance. In general, Blast Off has the kind of feeling pre-Movie Transformers were good at delivering, where they're made of vehicle chunks instead of wearing vehicle parts. It feels more visually in the spirit of Classics that way than many in the previous lines. There's a lot of generic mechanical details sculpted in on the shoulders, and the lower legs have a lot of indications of vents visible, accounting for most of the visible detailing on the toy. The yellow panels on the chest and pelvis also are sculpted with a pattern of triangular tiles, which if given a paint wash would probably make an amazing impact on the look of Blast Off in both modes. One unusual element of detailing can be found on the back of the legs and upper arms, where it appears Blast Off has jet engines pointing straight behind him. None of these elements are rear or even outward facing in vehicle mode, and the ones on the arms can't even be seen, so it has to be exclusively for robot mode. I kind of wonder if the designer didn't decide to add some apogee motors to suggest semi-realistic mobility mechanics for the robot in open space? It would fit the placement on the body at least. If that was the intent, that has easily got to be among the most specific and obscure bits of detail to find its way on a Transformers toy. 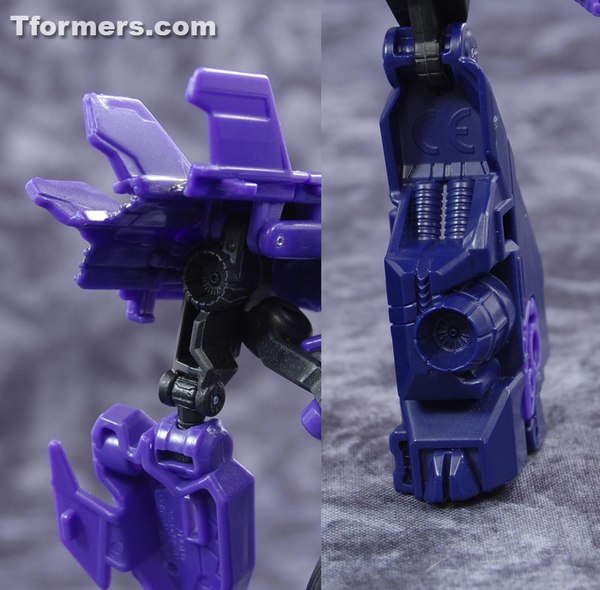 Blast Off has fair poseability. Thanks to how they transform, the knees have an extensive range of motion for being on a single hinge, and the hips move smoothly and easily around universal joints. Blast Off has very effective double elbow joints as well, and two joints around the shoulder, which should theoretically mean a hell of a range of movement for the arms. But it doesn't. It's the fault of how the transformation was engineered more than anything else, and it prevents such simple things as stretching the arm straight in front, or raising it at all out to the side. The joints in the upper arm are truly just "around" where a shoulder joint should be, and nothing actually exists at the correct place to serve that role. The arrangement of joints subsequently really limits what ways the arm can be posed, which is a shame beyond just the absence of simple movements. The robot is really nice overall, and Blast Off could have easily stood out from his team as a legitimately good robot figure independent of being part of a combiner. But the arms make sure to remind you that this is a toy with another real purpose and it's just killing time standing here solo. You can undo some of the limitation by turning the shoulderpads back and giving Blast Off monkey arms, but the gain is so limited that it's really not worth the way it spoils the look. 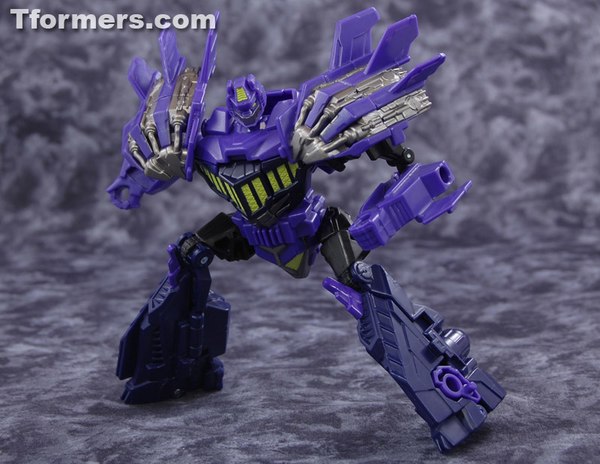 Blast Off's transformation is pretty straightforward. The hinged back plate may be a little reluctant to unclip at first, so just work with it carefully and slowly until it opens. After that it should be a lot more smooth. The only other word of advice is to mind the hips and make sure the joints are both arranged correctly or else you'll never get the aft section together straight.

Where Blast Off truly shines is in the vehicle mode. Well, shines is not really the right word what with it being all dark and night-time colors, but it's certainly the strength of this toy. And I'll tell you, from the moment the press photos were released just before Toy Fair, this has reminded me strongly of some existing ship design, but in all these months I have never been able to place it. It's driving me just a little bit nuts. Whatever it may resemble, it's plainly a sci-fi take on a space shuttle, but besides the most elementary of shapes it goes far off the mark in design. The bulbous aft section gives the impression of a massive drive system, while the comparatively narrow forward half gives it a feel more like a space fighter than a bus in space. (public transportation was always Astrotrain's job anyway) What I really enjoy in the appearance of the vehicle mode is that it has the impression of many overlapping panels and irregularities to look alien, but it's also styled in such a way that it comes across a little like an Original Trilogy Star Wars ship. I'm sure there's a generally accepted term for that, but in this case I'll just call it "antique futuristic", not to be confused with retro futuristic, of course. 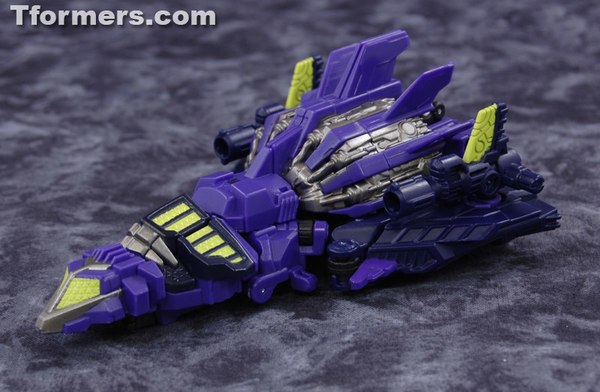 Blast Off comes together solidly in vehicle mode, with only minor points of instability. The cockpit section can rotate freely on a joint meant for the combined mode, and the winglets in back don't lock especially securely in place. But in that case, their range of easy movement is only just enough to misalign them from the fuselage a bit, rather than able to be accidentally knocked completely out of place. As I said, these are minor points, only brought up to illustrate how well the vehicle mode has turned out.

Blast Off's cannons are probably my second-favorite weapon out of the whole set. They're plainly inspired by G1 Blast Off's cannons, but thoroughly updated to be spacier and to take the place of what was once a separate handgun. They're great in vehicle mode mounted to the aft section as big cannons, and something I like a lot is that depending which of two places you attach them, they can stay on the toy all the way through transformation and serve as mounted arm cannons. Or if you prefer them hand held, they can do that too, provided you use the side pegs. The ones that look like they should be the pistol grips are a little too thick to fit the hands on my example of the toy. 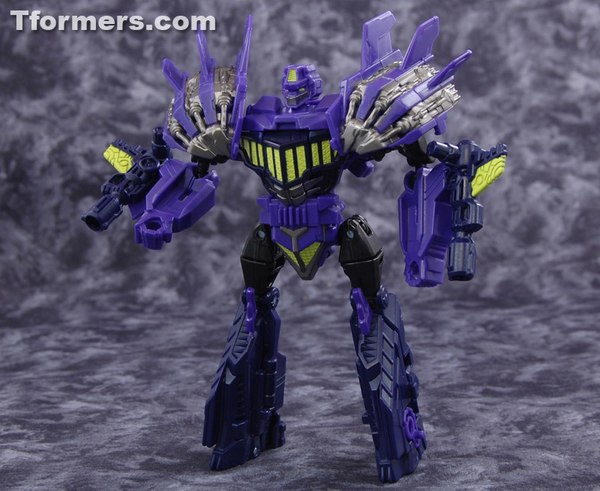 Blast Off had the makings of an anomaly by being a good toy from a combiner set just on its own merits. The vehicle is fantastic, and the robot is at least superficially uncompromised for the tasks set before it. But dig in a little more and the flawed arm jointing reveals itself and you're snapped back to the reality. It's a shame Blast Off couldn't have broken away from the team more fully, as the vehicle mode is great enough that I wouldn't have minded seeing a fleet of them in various colors independent from the other Combaticon molds.

But hey, it got close, and that's worth some points. I'll go ahead and spoil upcoming reviews and just say Blast Off is the strongest individual among the five in overall terms. And if you get the regular retail version, it's also kind of pretty. Blast Off is Very Good on the Figurereviews.com Non-Numeric Rating, and while the conventional approach is to get Swindle if you only buy one Combaticon, Blast Off should definitely be considered as a sole representative. One choice is based on strength of character, while the other is the quality of the toy you'll be paying for. Choose accordingly. 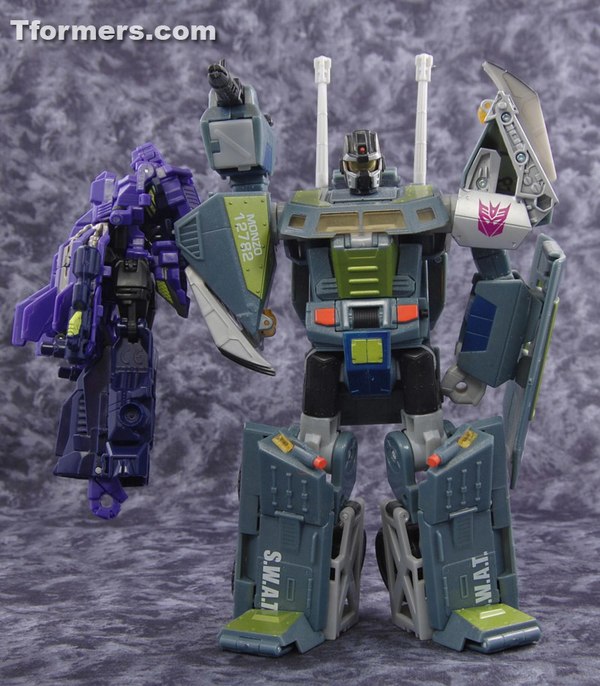 You Can Order Blast Off Now at BigBadToyStore.com