To the other Combaticons, the war with the Autobots is an epic clash for the fate of the universe. To Swindle, it's a business opportunity. While his teammates relish the frenzy of destruction they cause as Decepticon Bruticus, Swindle quietly calculates how much he can get for selling all the scrap metal that'll be lying around afterward.

Scrap metal that on occasion includes his own team members. And it's for that reason that everyone remembers Swindle above all the other Combaticons. He is so fixated on accumulating wealth that there's nothing he won't try to sell off to the highest bidder. Granted, it's not the deepest characterization, but in the days of the G1 cartoon you took what precious nuggets you were given. I don't think it's unreasonable to expect Swindle will carry the broadest appeal from this series of figures, just because there will be people who want a representation of the character without necessarily an intent to build Bruticus. There might be generally better way to accomplish that, though.

Swindle is quite impressive as being the biggest, tallest Combaticon in the set, actually rivaling Reveal The Shield Jazz in terms of height and bulk. ...as long as you look from the front. The secret to Swindle's success comes in being basically empty inside. If you look at Swindle's back you can see the structural framework of the figure, which is much less massive than the big armor plate on the front would have you believe. Though that's not an unsuitable body mod for the robot equivalent of a used car salesman. Look big and authoritative, and above all else, have thick armor when your "customer" comes back. So I can get behind the body construction as being applicable to the character, plus even if it is an illusion, it's kind of nice to have a Deluxe that at least looks like the Deluxe I've become used to over recent years. 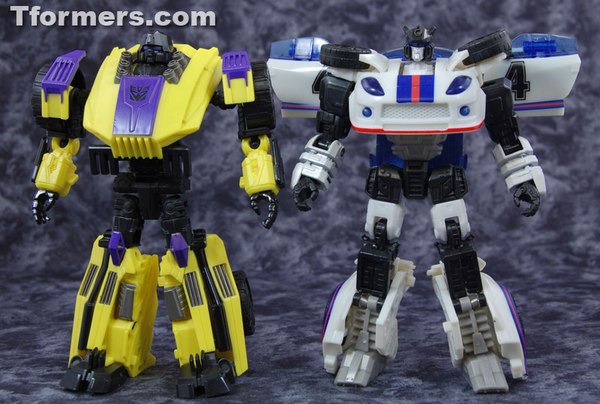 What I can't really reconcile is the head. Most of the other Combaticons have been pretty evocative of their classic appearances in terms of head sculpt, down to the fact that the heads should be vaguely peg-shaped. But Swindle completely abandons his typical peg-headed appearance. There is a vague Trailbreakerishness to the head, though that's just as easily attributable to the black face in black helmet thing this toy has. Although this Swindle's head is more than a little similar to Alternator Swindle's head, which was meant for Trailbreaker. All specifics aside, the point is that Swindle needs a new, more accurate head. Get on that, third party dudes.

Swindle has pretty good poseability, given much of the transformation relies on these joints doing double duty. The thighs will tend to pretty quickly vanish in to the shins as you bend the knees, but in posing terms the function has little impediment. There is no standard ankle articulation, but the toes can point, and if you really need posing help, the combiner hands can be deployed to assist, giving Swindle a good range of stable stances. Swindle has good range of movement in the arms. The shoulders are restricted just a little in raising to the sides because the shoulder wheels and the chest shell plate will obstruct each other, but at the same time it's a lot better than you have with Onslaught. The elbows are double jointed to serve dual purpose as the elbow hinge and bicep swivel. Their design also allows them to bend almost all the way backward as well as 90 degrees forward. But I'm pretty sure Swindle is the one who ought to be twisting someone else's arm, not getting his done. The head is on a ball joint, but limited to the range of a swivel. Only a stress-relief space on the back of the head betrays the presence of a ball joint here. But that should mean a better chance of being able to replace the head if a better alternate should become available at a later time. 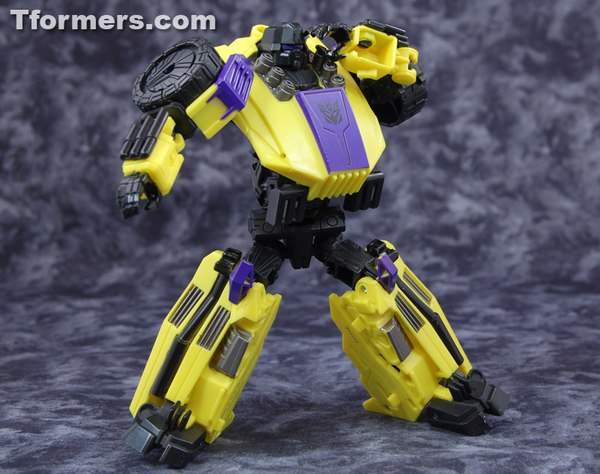 While Swindle doesn't have a lot of special detail sculpted in, one bit did catch my eye and stood out. The true robot body behind the chest place has a range of struts, panels and assorted shapes making up its surface, laid out in a logical way that you can easily follow as the anatomical structure of the robot, demonstrating the elements that would let the "real" Swindle move torso and arms, and support the upper body. Since this structure is very visible from the sides, it's great that thought enough was put in to make it look like this is how the robot is actually built, rather than being a concession of toy design. As I said, not really anything else special about the sculpt outside that, but I'm glad to find at least one little thing that's worth calling special attention to. 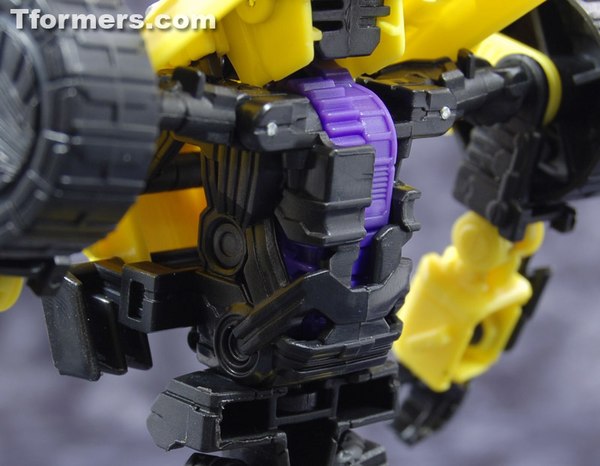 Last time when I reviewed Vortex, I mentioned it had not been my greatest frustration among the Combaticons. That title is reserved for Swindle. Though frustration is probably the wrong word; "terror" seems more appropriate. Because while Swindle's transformation is nothing approaching complicated, there is one step that I absolutely dread reaching. Swindle's front and rear vehicle halves connect together with tabs and slots, but the fit between them starts out hideously tight, such that massively excessive force is needed to either join or separate them, so much that you feel assured the tabs will simply tear from the front plate. Modification doesn't seem like it would help here, and after a little while they do appear to relax a bit. But stress marks have been left behind to an alarming severity, and these tabs are pretty vital to the structural strength in vehicle and leg modes, so I am a bit worried. There's two pairs of slots for the tabs: one of them fixes the front end in place for vehicle mode, the other for leg mode. Vehicle mode uses the upper pair, and leg mode needs the lower set so the front panel is tilted clear of where the combiner port has to go.

There are tabs on the forearms that plug in to the sides of the hips to secure the arms. These only work when everything is at just the right angle, but the entire process of getting them together is much easier than connecting the body panels. 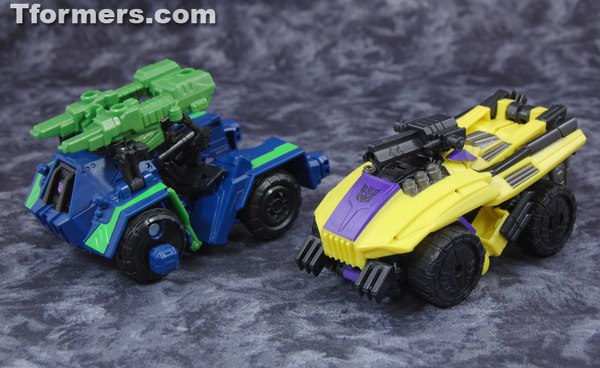 I have yet to decide whether Swindle or Onslaught have a less convincing vehicle appearance. Onslaught being obviously unfinished from nearly every angle, but Swindle looks pretty obviously like flat panels laid atop a chassis, with gaping holes visible from any angle but top. It's not really unfinished looking so much as it looks like something that's been badly disguised from looking unfinished. Not helping things I'm sure is that there's an obvious absence of necessary paint. The coloration is sparse looking, with many of the paint apps used for black or gunmetal detailing instead of trying to adequately balance the colors for the vehicle mode. Your eye is largely drawn between the bright yellow of the body shell and the unpainted black of the tires, and it makes a very two-toned appearance. I don't usually fault a toy for unpainted hubcaps, but in this case I think it would have done a very important job of tying the color scheme together if it had gotten silver or gunmetal hubs with the purple "running lights" colored in.

Even as frightening as it is to tab the body together, the result (for as long as the tabs hold out) is a very solid vehicle form, with everything locked well in place. There's no aspect that's flimsy or loose in place. It all tabs down to a stable little chunk. Of course this also means there are no kind of moving parts or points of interest to the vehicle mode either. There's a single 5mm port in the middle of the back to mount a weapon. What you see is what you get here, and what you get is some kind of Cybertronic off-road deal. I guess ultimately between Onslaught and Swindle, it's a little more credible to call Swindle an armored car. At least he gives the impression of being structurally complete - so long as you don't look from the side or especially not the back.

Swindle's weapon stands out as being accurate to an element present on Swindle's game model, where it acts as a turret for the vehicle mode. It's kind of small to try to play as the cannon Swindle is often associated with, and is on the plain side. There's no real stand out characteristics besides the 5mm pegs sticking out to either side, that you can use to attach other weapons around. More on that when I cover Bruticus in detail. Points for not being an empty shell like Onslaught's weapon, but this is the least visually interesting gun among the group. 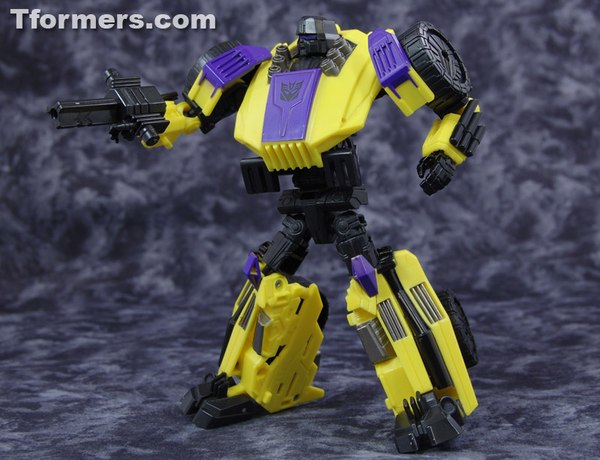 Swindle is pretty solid overall. My only lasting complaint is those vehicle body tabs. Though ultimately I'm thinking even if they do break the toy can live without them, a toy should never be designed such that the consumer needs to think that way about it. I'd like things better if the head were more G1-toy derived like the others are to varying degrees. The Alternator is a really strange choice to base the head on, and colors aside it's hard to see the toy as Swindle as a result.

But in the end it comes out pretty well. Swindle scores Good on the Figurereviews.com Non-Numeric Rating Scale and is in the better of the Combaticon toys. But if you just want a toy that does a good job representing G1 Swindle on your desk with no other concern in mind, consider Animated Swindle instead. It carries the spirit much more faithfully. I really hope for a replacement head kit in the near future. It will do so much to help this toy be who it's supposed to. 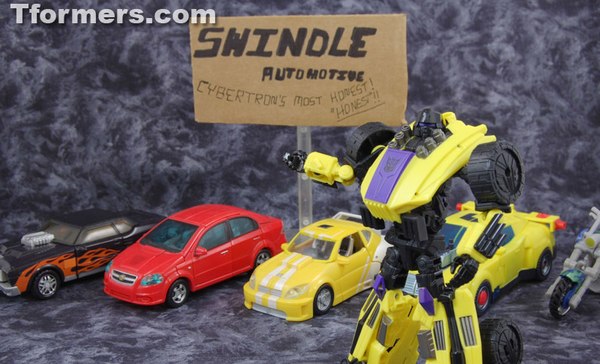 You Can Order Vortex Now at BigBadToyStore.com