With a full season completed, Rescue Bots heads to home video in a kid- and budget-friendly format. Roll to the Rescue features six episodes of the series in all, with the first episode classified as a bonus along with the printable coloring sheets.

It's a very simple set, as befits a budget release aimed at children. You get a single disc in a simple white case with no paperwork whatsoever. The cover puts the logo front and center and surrounds it with decent-looking stock shots of most of the cast. The only important technical aspect is the ease of removing the disc from the case- which I have seen plenty of manufacturers get wrong -and it works fine here. 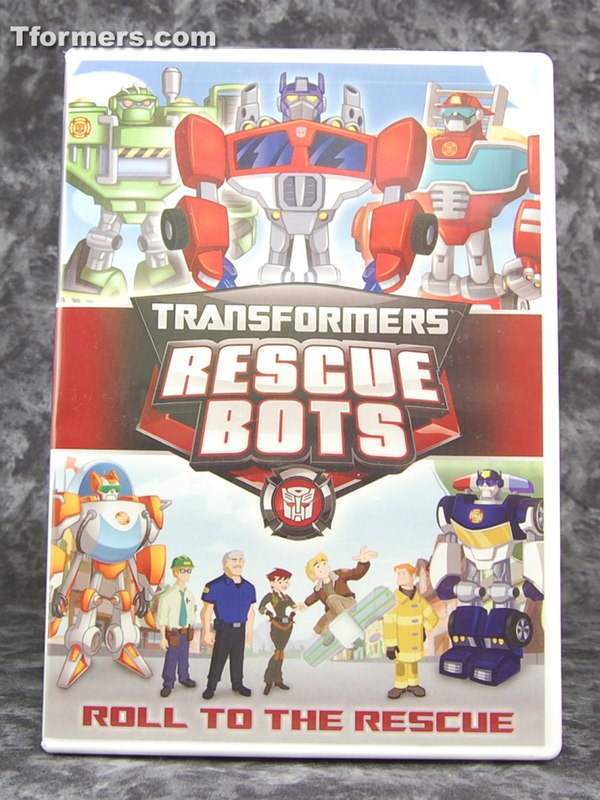 The six episodes included are six of the first seven episodes: "Family of Heroes," "Under Pressure," "Hotshots," "Flobsters on Parade," "The Alien Invasion of Griffin Rock," and "Four Bots and a Baby." For some reason episode 6, "Cody on Patrol," was skipped over; since that episode was apparently written by Bob Forward of Beast Wars fame, it's a pity it's not included here. It should be noted that while the packaging and advertising list the pilot, "Family of Heroes," as an extra, it's listed with all the other episodes on the disc, and will be the first one to play if you hit Play All. The menus are simple, which you'd expect from a budget title, but of course if you're wanting this for your kids, simple, easy-to-navigate menus are the good news. In both the show and menus, everything's bright and colorful and clean- it looks good! Naturally as a DVD-quality release it's going to look better at SD resolutions than HD, but the uncomplicated and clear lineart should work to your advantage if you're running the disc on an HDTV.

For those who've never seen it, the show revolves around an Autobot rescue-response team awakened after a long time in stasis. Optimus Prime partners them with a family of human first-responders in a small, technologically-inclined town in Maine in the hopes that humans and Autobots will learn to work together. Cody, the youngest son of the Burns family, is our kid-POV character (and thus our lead). Cody befriends the Rescue Bots and teaches them what he can about Earth as they defend the citizens of Griffin Rock in the guise of advanced, non-sentient rescue robots.

The animation is 2D Flash-based animation, and makes the best of the format with its style. One quibble: the Bots' faces are animated in segments, with the jaw typically being a separate piece for speed and budget's sake; combined with the bright-on-dark optics they remind me of nothing so much as a team of Terminators. (This style is slightly more unsettling on Optimus Prime when his facemask is down.) The writing doesn't talk down to kids and is actually fairly entertaining for an adult, which is always the first step in making quality children's television in my opinion. There are some decent lines throughout, and fun performances from the likes of LeVar Burton, Maurice LaMarche, and the ever-present Steve Blum. As an older Transformers fan, I can say it's a fun show, maybe not anything I'd want to watch on a regular basis- but the quality is there, and it's actually nice to see a Transformers show that doesn't focus on the Autobot-Decepticon war. Though I also has to compliment it, as a show for kids as young as 7, for not skipping over the subject of the war in the first episode either.

Since the bonus episode really isn't, that leaves us with the coloring sheets. They're simply grayscale reproductions of the character models of the four Rescue Bots and Optimus Prime. Grayscale art doesn't color as well as clean lineart. It's what I want to say was a nice gesture, but nothing super-exciting and it could have been executed better.

This is actually my first exposure to Rescue Bots, and I enjoyed it quite a bit! While my preference with most Transformers media is for solid season boxes, this is probably a good show for individual releases. I wish they hadn't skipped Episode 6, but hopefully if there are future releases it'll show up later on- it may be a case of production order differing from broadcast order. Like I said before, if your intent is to put something on your kids will enjoy for the afternoon, this is probably a good buy. 6 episodes for $15 seems like a decent deal to me, and if you order it from someplace like Amazon you may be able to get this for under $10, which sounds to me like a good price. If you're a fan of Rescue Bots it's probably worth it either way, as this doesn't strike me as a series we'll get Blu-Ray season boxsets for. Just be sure you treat the coloring sheets as the bonus they were intended as, because they're not that great. 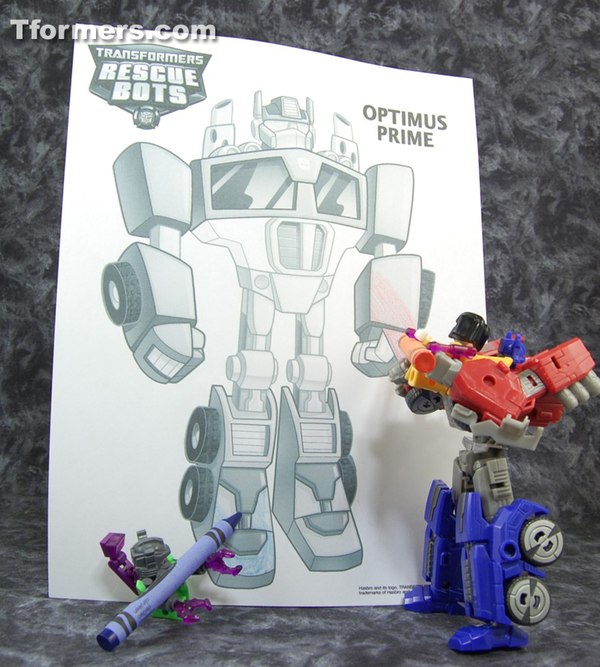