In ReGeneration One #84, the operation to reclaim the Earth from Megatron and his (mostly) mindless undead Decepticons commences. The team from the previous issue is still in place: Simon Furman writes, Andrew Wildman pencils, and Stephen Baskerville inks, John-Paul Bove on colors, and lettering by Chris Mowry. 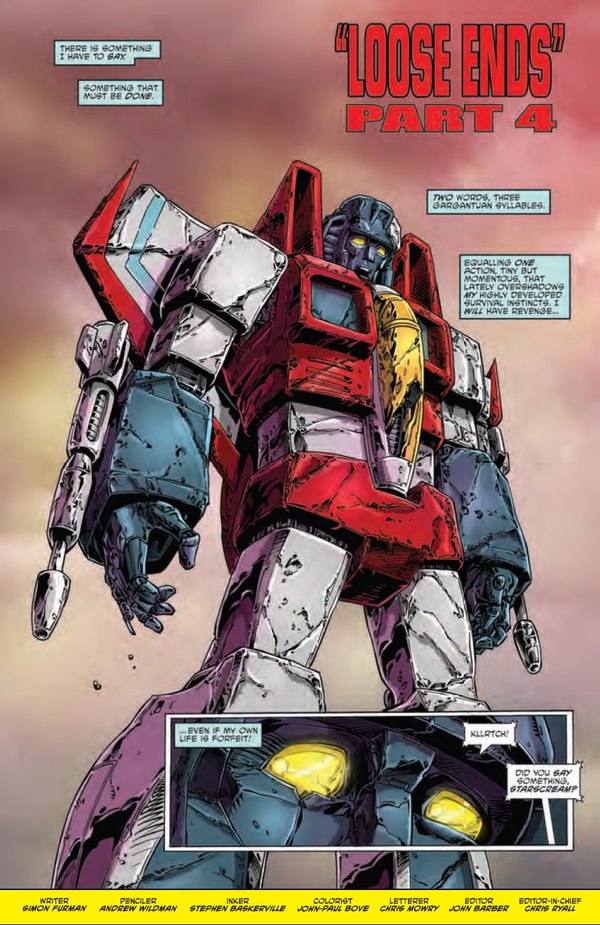 We open on Zombie Starscream, who has something he needs to get off his chest. He can't, of course: Megatron's modifications prevent that. Meanwhile, the Wreckers have split into two groups: Whirl, Springer and Sandstorm go after Kup, who has been infected with Scraplets and used as bait. The rest of the remaining Wreckers accompany Circuit Smasher and the rest of the human resistance in an attack on the Ark- which Spike makes it entirely clear will not be a salvage mission. As the two battles unfold- neither going particularly well for the Autobots and humans -Hot Rod, back on Cybertron, has taken over Optimus Prime's old Furmanverse job of having apocalyptic visions that get interrupted by a Decepticon attack. On Earth, Megatron is about to kill Springer when Optimus Prime finally arrives- but Zombie Starscream still has something he needs to get off his chest.

This issue dispenses with the exposition and nifty obscure references of last month and gets down to the business of the big battle on Earth we were setting up for. This is the fourth issue in a five or six-issue story, so we're through with setup but not entirely ready for resolution yet. We get a couple of big reveals, including one- the issue ender -that won't be a surprise quite so much as an inevitability. The rest of course is "things go bad for the Autobots so they can turn it around next issue."

As the Hot Rod scene mentioned above attests, Simon Furman is definitely writing what he knows in this issue. He has certain themes and stylistic things (above and beyond his infamous narrative tics) that tend to recur very frequently, and besides the premonition-interruption scene, the other one I note here is his habit of playing with slurred speech. He's a writer who likes playing with language, and I tend to like that. The coloring is once again good, but maybe still too nuanced for a G1 revival. But what I do like a lot is how the two battle grounds are given very different color schemes so there's no trouble telling which group you're looking at, at any given moment. Also, Wildman and Baskerville are as solid as ever on art, and in terms of stylistic issues (which are mine entirely and I admit that) there's nothing new to say. The one thing that does stand out to me, which I really should've at least mentioned before, is how very `90s Circuit Smasher is. There's something almost Liefeldian about the design, but I want it to be clear I don't mean this as a slight against anyone here's artistic skills. I'm talking more about the post-Image, `90s school of character design, of which Spike is definitely a member.

I said last month that I wanted to see where the story's going, and I stand by that. It hasn't quite gotten there yet, but we're clearly building to the big finale. Next month is going to be the issue where all the big stuff happens, I expect, and we'll get to see if the payoff for these first four and a half issues works.