As "Shadowplay" continues with Part 2, "Patternism," Prowl and Chromedome cross paths with Orion Pax as the investigation continues to broaden in scope and implications. Script by James Roberts, art by Alex Milne, color by Josh Burcham, and lettering by Chris Mowry. 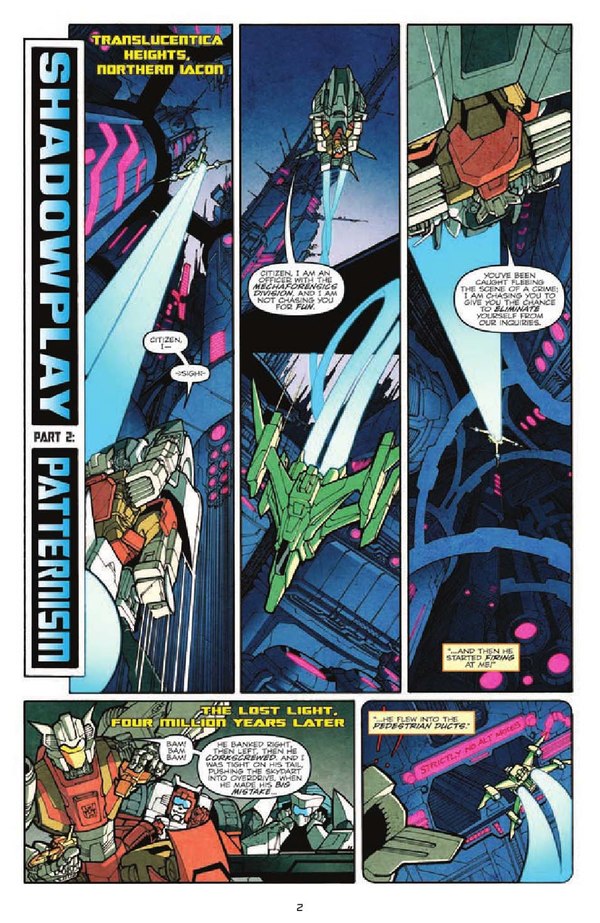 As we come back, Prowl is investigating the new crime scene from the end of the previous issue as Chromedome chases down a fleeing suspect. After the chase ends poorly (for the suspect), Prowl announces that the victim was a minor senator with a hidden Decepticon "shrine" on the wall of his apartment. In the present day on the Lost Light, Rodimus discusses the attack on Red Alert with Ultra Magnus as Drift does a particularly poor job of interrogating Cyclonus. But First Aid knows who the killer is... and it's not Cyclonus. In the pre-war era, Orion Pax intercepts a second fleeing suspect as his investigation and Prowl's converge. As they follow their respective leads, they discover that the murders are just the beginning, and they're not sure who they can trust...

This issue adds more information and more layers to the murder mystery that started in the previous issue, and between what has been said and what we know about the history of Cybertron, we know it's not going anywhere good. In the meantime, we have equally mysterious events unfolding in the present day, and I think it's pretty obvious that this mystery will be related in some way to the events that the crew of the Lost Light are recounting. The issue ends on a decent cliffhanger as Orion Pax and his fellow investigators prepare to deal with the plot behind the murders, and I'm looking forward to seeing how that unfolds next month.

Everything I said about the writing last time still holds true: James Roberts has a clear grasp of his characters, their motivations and actions, and he knows where the story is going. You could probably even cover the artwork and know exactly who was speaking at any given moment. And beyond having the nuts and bolts down pat, it's fun. Roberts continues to intersperse the retelling of the tale with snarky comments on the nature of storytelling, and even the cast page is as entertaining as it is informative ("Swerve, Barkeep: Nickname at the academy was 'Shut The Hell Up.") Alex Milne's artwork continues to do the script justice and more, with Transformers that are expressive and lively and yet still robotic. The chase scene at the beginning of the book "scans" perfectly- skim it, ignoring all the dialogue, and it's still clear and unconfusing.

We have a clearer picture of where the stories are going now, and next time we should start to see our storylines converge and resolve. "Shadowplay" is coming together nicely, and if the rest of the story maintains this level of quality, it may well be one of the best Transformers comics to date.

It's going to be a long month.