In the 20 years since Marvel's Transformers #80, Megatron has been systematically laying waste to the Earth to provoke a final confrontation with Optimus Prime. Now, in ReGeneration One #85, he gets his wish. Simon Furman writes "Loose Ends (Part 5)", Andrew Wildman pencils, and Stephen Baskerville inks, John-Paul Bove on colors, and lettering by Chris Mowry. 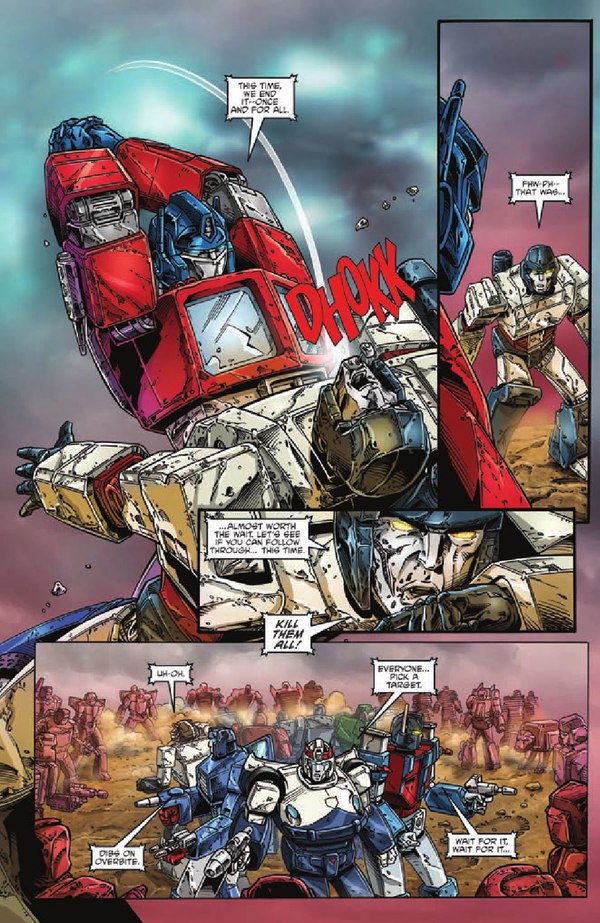 As we open the issue, a final act of cruelty pushes Optimus Prime over the edge as he attacks Megatron. As their battle continues Megatron explains his motivation for this battle with Prime, and how he has set every nuclear missile on Earth to launch no matter the outcome of the battle: he wants to have a definitive battle with Prime, but they are halves of a whole who need one another, so it's time for this to end. Elsewhere, Circuit Smasher and the Wreckers are storming the Ark to make sure the launch doesn't happen while Hot Rod continues to deal with the crisis on Cybertron. And as the other Autobots fight the zombie Decepticons, scraplet-wracked Kup grasps the full implication of Starscream's message...

This issue wraps up the main conflict of the first ReGen One story arc, but other longterm concerns remain. The focus of the issue is on the final confrontation between Optimus Prime and Megatron, and with nearly thirty years of battles between Optimuses and Megatrons it's sort of hard to be excited by that anymore, even though in the Marvel continuity it's never quite happened before. And because it's the meat of the book, some of the more interesting questions raised last issue get answered almost too quickly and cleanly, even if that answer is a very good and completely sensible one. (It's almost so obvious I'm kicking myself for not thinking of it before, in fact.) What is really nice, is to once again see an Optimus Prime with a conscience, and not just one that simply won't allow him to endanger hostages. Furman's Prime who struggles with himself and has lines he doesn't wish to cross is still one that resonates with me more than the wise elder Optimus Prime has become in modern TF stories.

While it's also nice to see an outcome other than the most typical one for an Optimus v. Megatron battle, I find myself wanting to know more about the things happening at the periphery: what happens to Earth and Spike now? What is Soundwave's ultimate goal? The last few pages raise some interesting questions for the future and reintroduce a character who, if handled in the way he was in his last appearance, could be a very interesting addition to the book. With all of this looming in the future, the battle between Prime and Megatron feels almost anticlimactic, but also very necessary. This is essentially Furman clearing the deck, taking care of the "old business" of the age-old conflict between the two classic leaders, and planting the seeds for the rest of the book. Furman also hints at his theme of equilibrium between the forces of good and evil that he once started to address on the very last page of Generation 2 #12. I imagine that's a story - if not the story - that he's been itching to tell for a long time now.

There's not much more to be said about Furman this issue. Wildman and Baskerville do some great work here - battle layouts are clean and followable and there are some lovely panels that help to enhance key points of the story. Likewise, John-Paul Bove's colors hit exactly the right mood for one of those selfsame points, and on this one page the art, writing, and color come together and make their point perfectly. A few pages later there's a minor issue derived from how optics are drawn and colored in the book. It's not major, and it doesn't hamper the drama noticeably. But it is just a little odd to my, er, eye.

Also, my compliments to Wildman and Baskerville for their cover art, because this is the first issue where I feel they had the strongest cover of the three. Guido Guidi's is solid but spoilery, and again he seems like he's closer to the Marvel G1 style than anybody at this point. Geoff Senior's cover is one of those occasional pieces where the blocky Transformer anatomy he specializes in doesn't flow as well as it might for me. Also on the coloring side I'd like to see Ultra Magnus' blue be a bit bluer so he stood out from the Zombicons a bit more. But really, unless you're a hardcore Senior or Guidi fan, the standard cover is a fine choice.

If you were hoping for a story that wrapped up every outstanding plot point (as I was in all honesty), you might be a little disappointed by ReGeneration One #85 at first. But it does conclude the major conflicts of the Earth story arc (as well as the conflict between Megatron and Optimus Prime) and give you a slightly better look at where the book may be headed, and why. And I like what I see of that direction.