It's "The End of The Beginning of The World" in this month's issue, a decidedly descriptive title as everything prepares to crash and burn. Written by John Barber, with art by Guido Guidi, inks for pages 19-22 by John Wycough, and colors by Priscilla Tramontano. 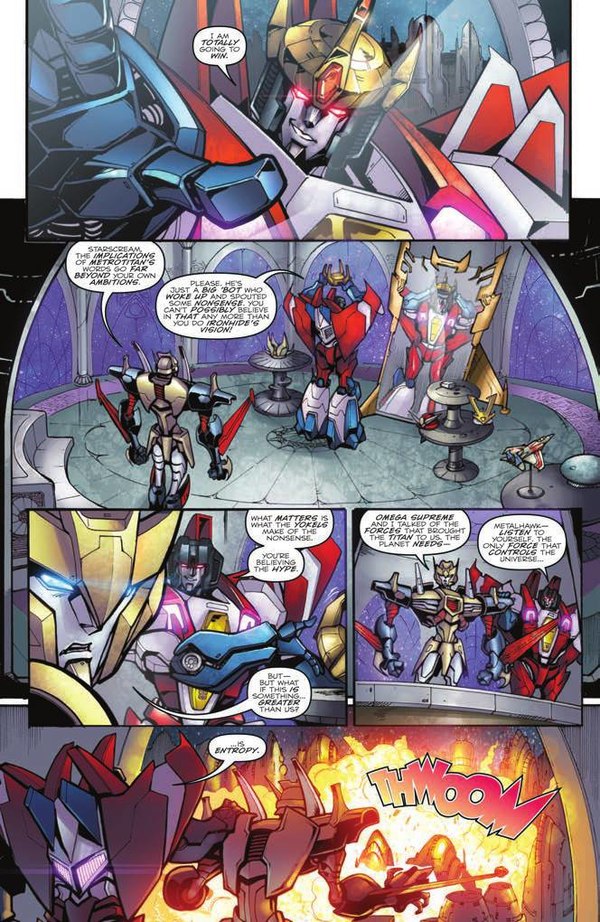 Capitalizing on the words of the Metrotitan (as seen in the events of the RID Annual), Starscream calls for a meeting with Omega Supreme, from whom he hopes to get further endorsement for his bid to take charge of Cybertron. While that fails, Starscream is still able to turn the occasion to send a few sound bytes over the newly installed Iacon Communication Service. Starscream believes his position is unbeatable, but as Omega Supreme explodes later that night, things begin going very wrong. Omega has barely survived the attack, but the incident causes everyone to look unfavorably on the Decepticons, since as Starscream himself considers, the majority of the unaffiliated Cybertronians always leaned more toward Autobot ideals. With public opinion turning away from his favor, Starscream goes to confront Shockwave over his recent actions. But Starscream has lost his standing among most of the Decepticons, and is told not to return again. An encounter with Swindle and Dirge proves fruitful, and arms Starscream with information he's able to use to force an alliance with Prowl and see their now common obstacle eliminated. This victory is brief though, as the issue ends with the emergence of a new element sure to trigger the collapse of everything the Transformers have worked toward so far.

This month is largely Starscream's story, watching him shift from the highs of the Metrotitan "endorsement" to growing scorn because of his Decepticon affiliation, to finally finding the means to maneuver others to remove the biggest threats to his campaign. Metalhawk also reveals that not all of Prowl's secret operations are all that secret, while again reaffirming his stance of being willing to take on responsibility for the population if that is what he's called to do. The distinctions among Starscream, Bumblebee, and Metalhawk are remaining pretty straightforward. Starscream privately wants to claim power, just by different means this time, Metalhawk has openly expressed that he will serve if chosen, and Bumblebee - mainly by way of Prowl - struggles to retain control for fear of what someone else will do with the power.

The art by Guido this month demonstrates why I think highly of him as an artist, as he again shows how capably he can emulate other styles. While minor variations were evident in the appearance of the characters, at a casual glance the changes wouldn't really be obvious. While I would love to see Guido given free reign to present his interpretations on these character designs, I understand and am happy with the intent of keeping as consistent art style as possible on the book. Guido does a great job with the action sequences in this issue, making all the elements clear and easy to follow with no need to study and try to trace the path of movement to figure out what's supposed to be happening.

The writing this month I think has been on the weaker end of this series. The bombing of Omega Supreme was not just convenient in story pacing, having immediately followed on a pointed line by Starscream against all probability, but it feels like plot convenience that it could even happen to start with. It wouldn't be like blowing up a built structure, Omega is a living being who ought to be aware if someone is placing things on or very near his body. It's not revealed who tried to destroy Omega, though it's made clear Starscream believes Shockwave's crew is behind that. It moves things along for the purposes of this issue, but I hope there is some more interesting truth to it to be revealed later that helps the event seem more credible. Ultimately, this is mostly acting as a bridge to next month's issue when we should get a shift in the storyline, and I think that necessity may have hurt this issue. Right now, I'm just hoping that what happens next month won't effectively throw away all the story development that's happened so far. Robots in Disguise has managed this year to take the story telling in a pretty different direction, and it'd be seriously disappointing if it just ended up sliding back to familiar patterns.